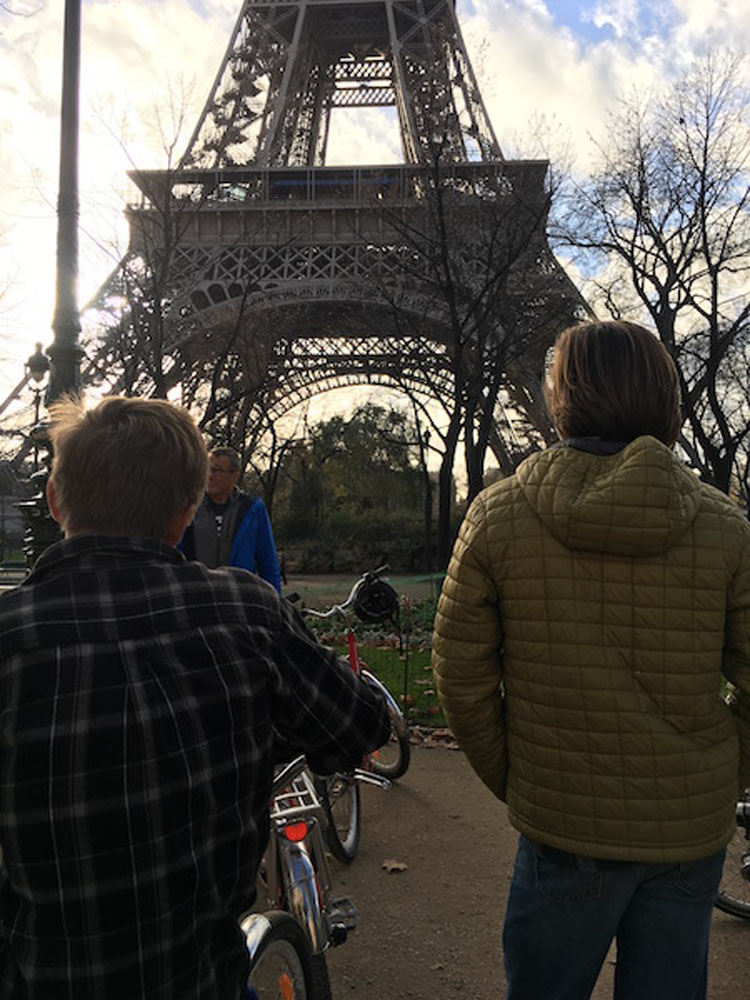 We recently spent two weeks in Europe with three kids, two of whom were growing teenage boys. Our budget only allowed for spending between €100-150 per day, which included all food, local transportation, and activities. No, we didn’t eat cheese sandwiches every day or skip all the great galleries, museums, tours, or dining experiences. We regularly indulged on crepes, Belgian waffles, or gelato, enjoyed restaurant meals every day, and saw everything we set out to see…and more. And yes, our teen boys are always, always hungry!

Rent an Apartment With a Kitchen.

This is crucial if you want to stay within budget. Kitchens allow travelers to make some meals in-house, which greatly cuts down on food costs. We always eat breakfast in because who wants to spend a small fortune on basics such as eggs, bread, and cereal? Even if you only use the kitchen for coffee and snacks, the extra space and freedom are worth the expense. During our Euro trip, we stayed in one HomeAway apartment and two AirBnB rentals. Each provided us exactly what we needed: space for five, a kitchen, laundry facilities, and an address in a neighborhood with locals so the nearby restaurants didn’t have overinflated tourist prices.

Stay Within Walking Distance of a Grocery Store.

Our first night in each city, we hit the grocery store so we were prepared for the week ahead. This is easier said than done, as families are always exhausted and usually overwhelmed upon arrival. Get recommendations from your host or apartment complex for the store within walking distance that has the most reasonable prices. For about 45-50 euros in each city, we got enough staples to last us 3-4 days that included: cereal, milk, juice, snacks/energy bars, fruit, wine, coffee and 1-2 dinners. Shopping in a foreign grocery store is also a great cultural experience.

Nothing will kill your budget faster than regularly purchasing beverages – whether it be bottled water, sodas, coffee, or alcohol. When traveling in the US, we all carry reusable water bottles and fill them multiple times during the day at drinking fountains. In Europe, water fountains are in shorter supply. Instead, bring those Nalgenes and Camelbacks with you. Purchase large water jugs from the supermarket and refill as needed. We still found we needed to buy a few smaller water bottles each day, but having a backup supply helped considerably. Oh, and Mom and Dad? We found it far more relaxing to have a glass of wine in our apartment instead of an expensive wine bar out on the town. 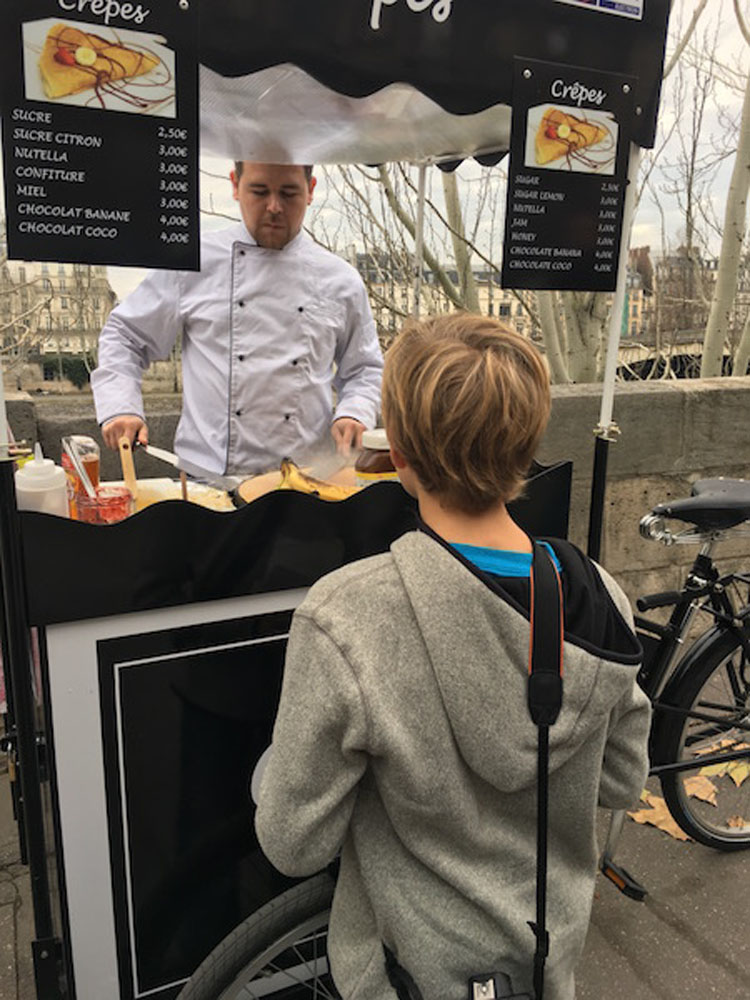 Plan to Eat Two Meals In and One Meal Out Each Day.

I’ll admit this is not always possible. We like food. When traveling in Europe, we really like food. We also like the ease of eating out, especially since our schedule is often go-go-go. Our primary plan is to have a big family breakfast before setting out for the day and to make a simple dinner in the apartment after a long day of exploring. This works well because at lunchtime, we’re almost always out and about, and lunch is a cheaper meal to eat out, allowing us to splurge a little more. Then at night, we get to relax when we’re already pooped. Need some easy dinner ideas? These meals are simple, and the ingredients (or some version of them) can be found almost anywhere:

Even though we only packed carry-ons, I brought a few boxes of my kids’ favorite granola bars and trail mix. Every day, I packed a few snacks in my daypack so we could curb our appetite between meals without wasting money at touristy locations. This is especially important in expensive food locations like airports or train stations. 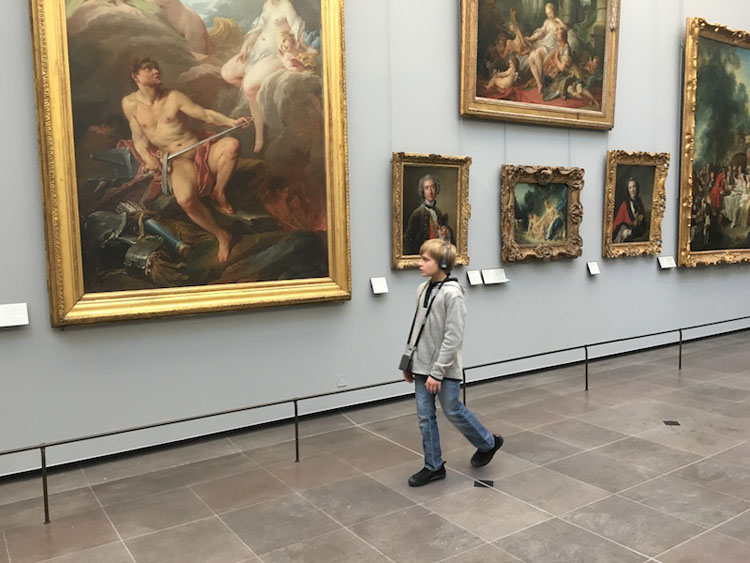 Give Kids Their Spending Money in Advance.

To curb constantly asking for treats, we gifted our kids with a set amount of euros before we left. This “trip money” could be spent on whatever they wanted from souvenirs to snacks, but it was theirs to budget. When they saw a creperie or food stand, we didn’t have to say “no,” and they got to eat their way through Europe.

Buy City Passes Ahead of Time.

Instead of feeling nickel-and-dimed at every museum or tourist attraction, pre-purchase multi-stop passes before you arrive. These passes will often save you considerable amounts of money, and by buying them before your trip, it’s easier to have a portion of the expenses already paid off. However, be sure to look carefully at the sites and do the math, making sure you’ll visit at least three of them. Many passes, such as Paris Pass, come with metro tickets included. During our five days in the City of Lights, we used the metro multiple times a day, making the pass a great value. However, bear in mind that kids under 18 get into most European museums for free…so maybe you only need a pass for Mom and Dad. Note: we also love buying passes ahead of time because they also allow us to skip the line in most cases, saving us hours!

In some cities, a bundled pass may not be the best value for your itinerary. In Florence, for example, we didn’t need any sort of public transit, and were only in the city for three days, one of which was Christmas Day, when all museums were closed. Instead of buying the Firenze Pass, we identified which museums were the must-sees for us and booked tickets online ahead of time. We still got the skip some lines, and controlled our day-to-day spending while traveling. 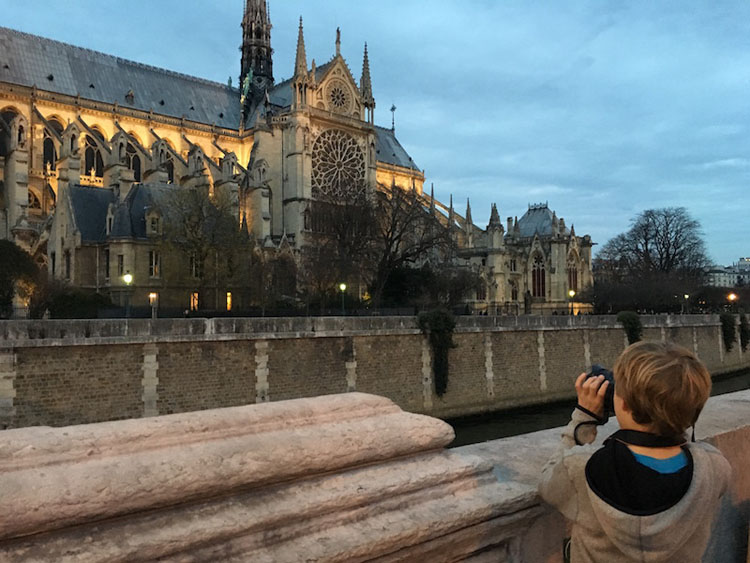 One of the fastest ways to blow your daily budget is to spend money on private transportation. We love using the metros, trains, and buses in Europe. Don’t be intimidated; we found the Paris metro far easier to understand than New York’s subway system, and while we did do an entire loop of Pisa before finding our stop, we found Italy’s public busses to be clean, cheap, and prompt. As suggested above, look for passes that include metro tickets, or buy multi-day passes as your itinerary dictates. In Paris, a one-day metro pass for everyone in our family was around $45, but taxis (crawling through Paris traffic) or a car rental would have been far more. In Italy and Belgium, city-to-city trains can cost less than 10 euros per person, with kids under 12 about half that. From Pisa to Florence, we paid only 8 euros per adult and 4 euros per kid on an express train.

Lastly, instead of changing destinations every few days, try to plan an itinerary with less stops. I love to see as much as I can on a trip, which means I struggle with the temptation to jump from city to city. However, when you switch locations, you can’t take advantage of the kitchen or grocery shopping, and of course, you spend more on lodging and transportation. Plus, you can’t get the best deals on bundled ticket packages or multi-day metro passes unless you’re staying at least three days.