We may not hold out hope that we'll be swept off our feet by a dazzlingly handsome prince or that love conquers all, but there's a certain nostalgia that comes with reliving the Disney classics. Iconic tales of romance and reverie, the plot lines may be optimistically unrealistic, but the locations actually are not. In fact, some of the most fanciful and memorable animated scenes in the movies are based on real-world locations. If you're looking to recapture some of the magic in your life, these spots are a good place to start.

Bibliophiles rejoice! Your covetous thoughts about Belle’s library can be laid to rest with a visit to this beautiful baroque behemoth. Admont Abbey, a Benedictine monastery, is home to one of the largest monastic libraries in the world and undoubtedly one of the most beautiful. The floor to ceiling bookshelves, swirls of golden trim and colorful frescoes are just a few of the many elements reflected in both the Beast’s library and ballroom. The only thing missing is your friendly serenading teapot.

While Ariel’s awkward appearance on the beach outside Eric’s castle certainly wasn’t the most graceful of entrances, the besotted prince doesn't seem to mind as he escorts her into his luxurious seaside castle. Chateau de Chillon doesn't reside by the ocean, but its battlements do sit on the waters of Lake Geneva. The sturdy castle has been occupied since the Bronze Age and its stunning location near the foothills of the Alps ensures an idyllic presence for years to come.

In a palace that looks strikingly similar to the Forbidden City, Mulan’s bravery and creativity prevents the Han army from murdering China’s emperor. Historically speaking, the impressive complex of wooden buildings were extremely susceptible to fire started by wayward fireworks displays (Mushu has some explaining to do), so it’s no small miracle that they’ve survived the ages.

Swarms of floating lanterns don’t typically make an appearance around the coast of Normandy, but fortunately, that doesn’t make Mont-Saint Michel any less intriguing. The devout bishop, Aubert, first arrived in 708 with a firm belief that he had explicit instructions from the Archangel Michael to build a church upon the rocky islet. Build he did and as the centuries ticked by, the cathedral and surrounding edifices became a stronghold against invasion. Today, when the fog rolls in, the triangular mass becomes shrouded in mist and mystery on the otherwise flat floodplains.

“Adventure is out there!” is perhaps a fitting tagline for a movie that features shots of a waterfall located in one of the five great adventure regions of Venezuela. Angel Falls is the world’s tallest waterfall and the 3,212 foot drop from the top of the cliffs to the ground below stimulates such a spray that visitors can often feel the mist from up to a kilometer away. The falls are located in Canaima National Park which contains no overland routes: access is possible only by plane, boat and hike.

It’s pretty clear from the opening credits, that Frozen was inspired by the cold nether regions of Norway. The meandering reindeer, the frozen fjords, the ever-fashionable wool sweaters, the lutefisk... all set the scene in the far north. The resemblance is further solidified during Queen Elsa’s coronation in what looks to be a traditional Norwegian stave church, inspired by St. Olaf’s in the town of Balestrand. The small wooden church sits quietly on a fjord, away from the bustle of the outside world and still holds Anglican services every Sunday. 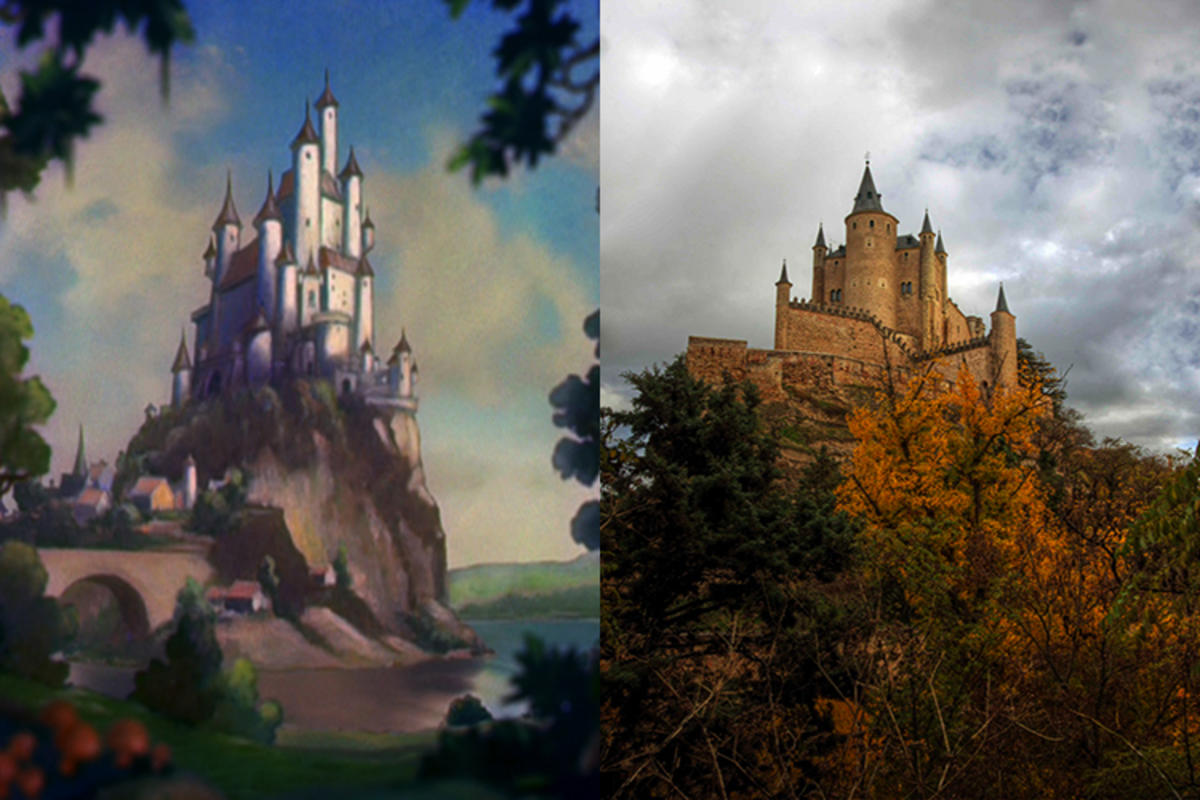 We see a lot more more of the seven dwarves than we do of Snow White’s castle in the movie, but its real life counterpart is fit for a princess, nonetheless. Built high upon a rock promontory for defensive purposes, it is shaped somewhat like the bow of a ship. Political turmoil has upended the area's stability for centuries so the castle's continued existence is a mark of its resiliency.