Remember when brunch used to be an occasion? Before the days of rolling out of bed, throwing on some yoga pants and pinning the hair in a messy bun, brunch was the most regal of meals. A time for you and your fabulous girlfriends to get dressed up, head to the most celebrated spot in town, and linger over juicy gossip, bottomless mimosas and stacks of hot cakes and maple-infused bacon.

With brunch spots a dime a dozen these days, the morning meal is quickly losing its "je ne sais quoi." Never fear, we've scoured the country to find places that still offer a little edge with your eggs. From a thrilling French day party to a New Orleans drag brunch, here are our absolute favorites of the brunch bunch. 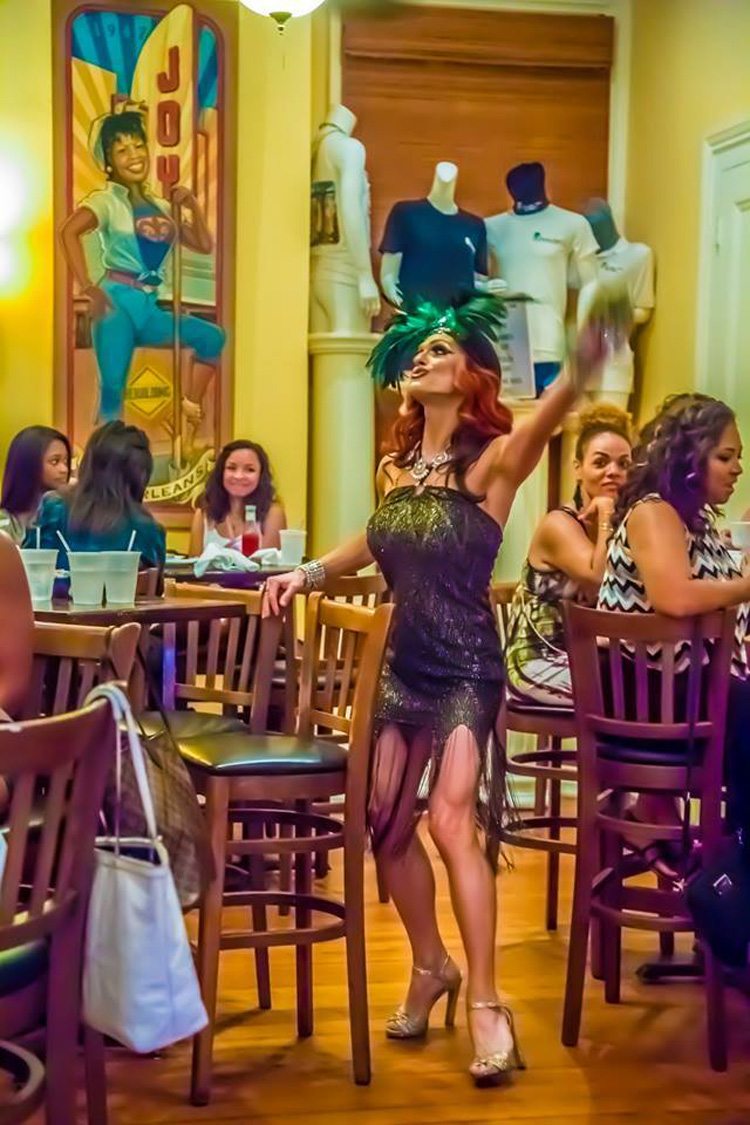 Don't forget to bring your bathing suit for your morning at The Country Club, an Italian-inspired cottage in New Orleans that boasts a sauna, cabana bar, Jacuzzi, and poolside lounging. The best time to go is during the famed "drag" brunch, held on the first and third Saturdays of the month. You'll mix and mingle with elaborately dressed female impersonators over $15 bottomless mimosas and sweet Southern favorites like fried green tomato Benedicts, hangover tots, and creamy shrimp and grits. 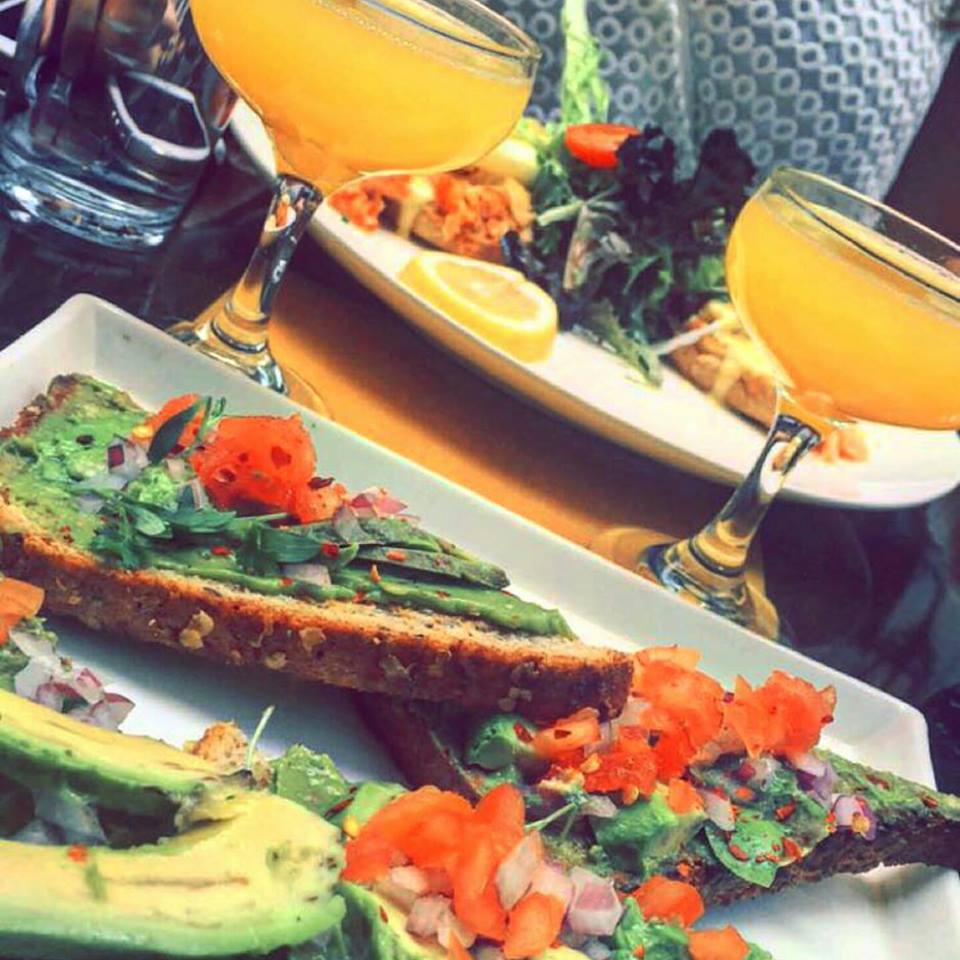 You'd be hard pressed to find a better brunch deal in New York beyond Hotel Chantelle's all-day jazz fest. Located on the Lower East Side, the swanky French eatery is legendary for its 92 cent cocktails you can only get from 11 a.m. until 5 p.m. on weekends. Those include the signature Strawberry Lime Rickey (vodka, strawberry puree, soda) and Easy Passage (vodka, lemon juice, prosecco), as well as $4.92 mimosas, Bloody Marys and Bellinis. Those liquid attractions draw people ready to party until the final flute, but for those that have overindulged, the a la carte menu of white truffle pizza, lobster Benedicts, and French toast stuffed with maple-infused mascarpone and ricotta are there to soak it up. 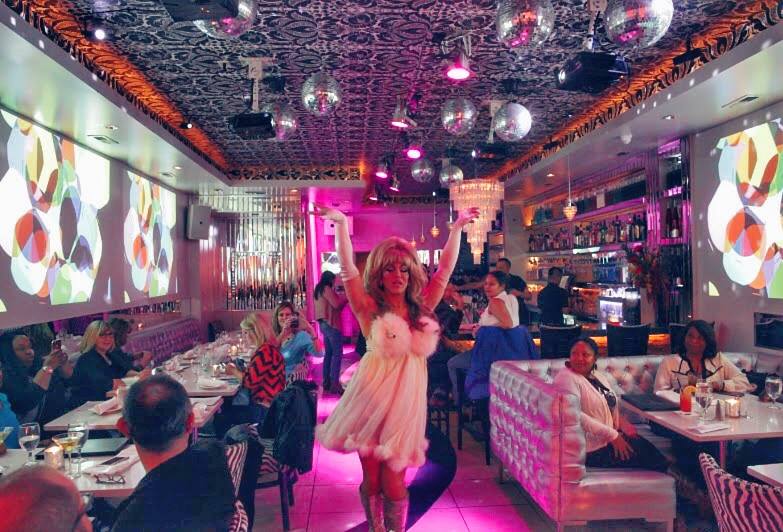 A whimsical Chicago hangout best known for its "divas" donning glittering gowns and towering stilettos, Sunday brunch at Kit Kat Lounge & Supper Club will have you schmoozing with the likes of Lady Gaga, Madonna and Beyonce. The scene is especially popular for bachelorette and birthday parties, but the food is nothing to sneeze at either. For $29.95 you'll get unlimited mimosas, Bloody Marys, sangria or Bellinis, biscuits with honey, plus the choice of a steak skillet, panini, chicken and waffles, or the pasta of the day. 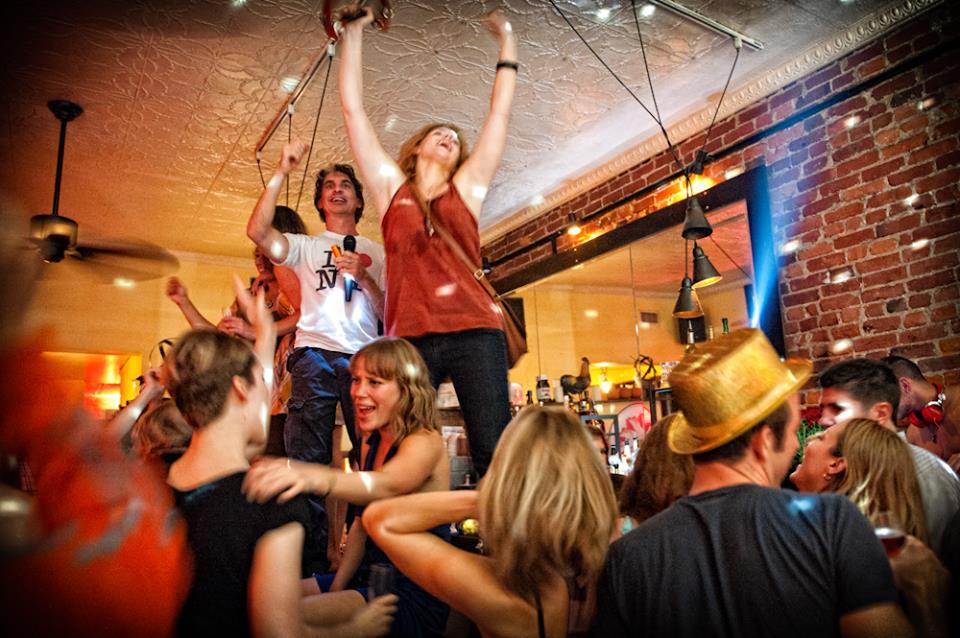 You may not believe it, but Washington, DC's hottest brunch actually requires reservations at least a couple of months in advance. That's right. For eggs. And French toast. And lots and lots of mimosas. Held at the fashionable L’Enfant Café and Bar, "La Boum Brunch" resembles an after-hours Parisian house party where guests must be at least 21 to attend. A rowdy deejay spins today's hottest tunes and bar top dancing is strongly encouraged. There are sporadic burlesque performances and an ample amount of sparklers. It's $29.50 per person to attend, but beverages are not included. The party happens from 2-5 p.m every Saturday. 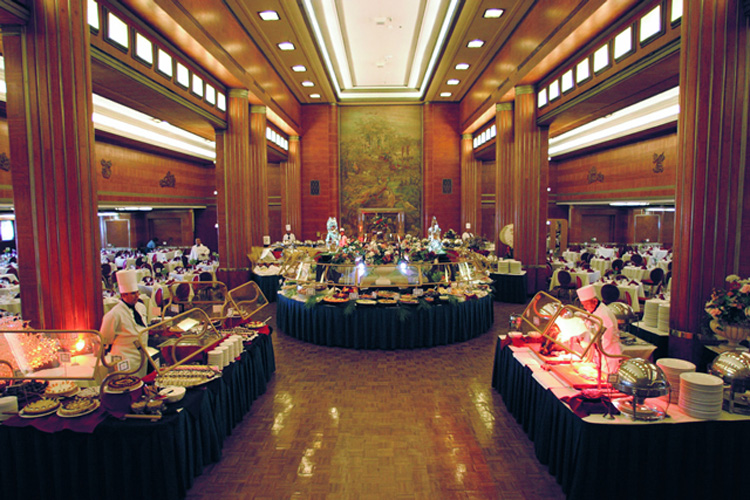 The Queen Mary had quite the life during her almost 90 years in existence. From extravagant beginnings in Scotland transporting aristocrats to eventually making her way to America, she now caters to hungry brunch-goers. Permanently docked in Long Beach Harbor, the opulent ocean liner serves one of the best Sunday brunches in Southern California. To get the full experience, diners should book one of the stately guest rooms for an overnight stay. The brunch'll set you back a pretty penny at $55.95 a person, but champagne is part of the deal, and goes well with global-inspired dishes like Asian-style ribs, made-to-order omelets, and carne asada tacos. 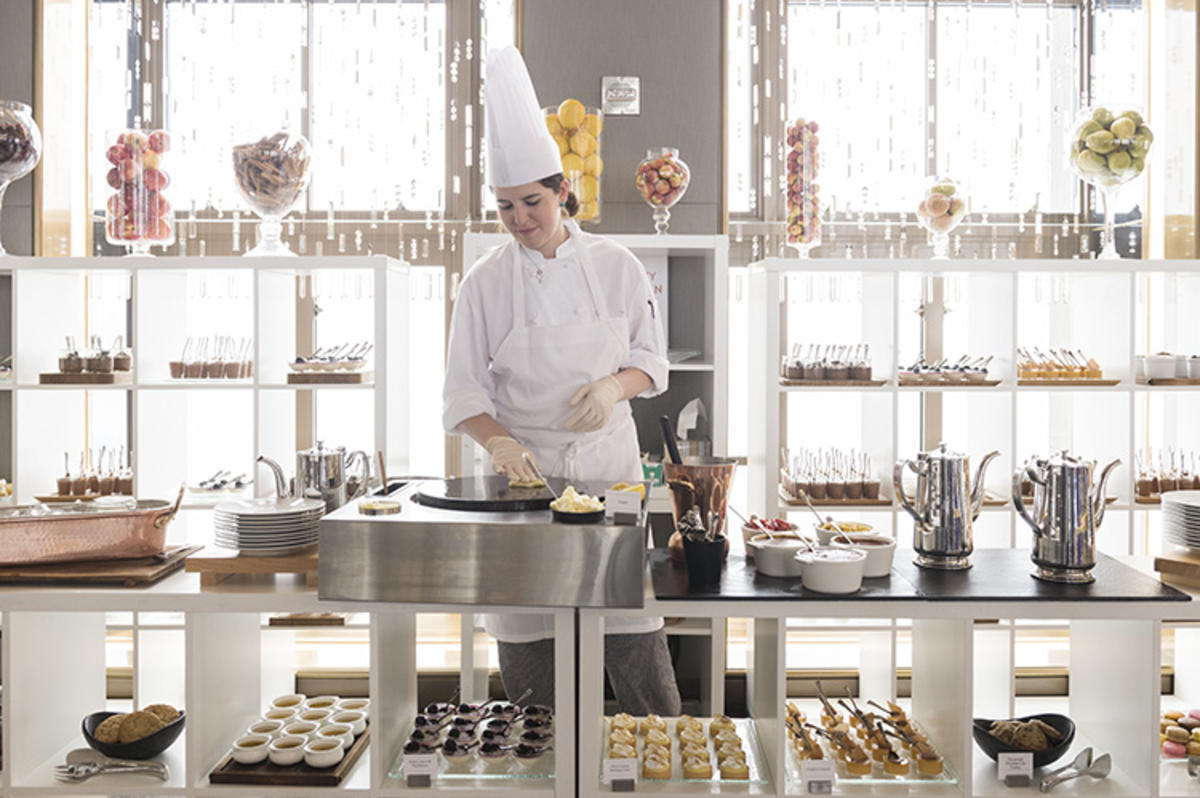 Sometimes you just have to treat yourself, and if you really want to go all out during your next New York visit, splurge on brunch at the Rainbow Room. It is $125 per person, but that comes with one of the best views of the city skyline from the iconic building's rooftop and a live jazz performance. While entrees are a la carte, it includes a number of chef stations for a raw bar, charcuterie, and desserts. Reservations are highly recommended at least six weeks in advance. 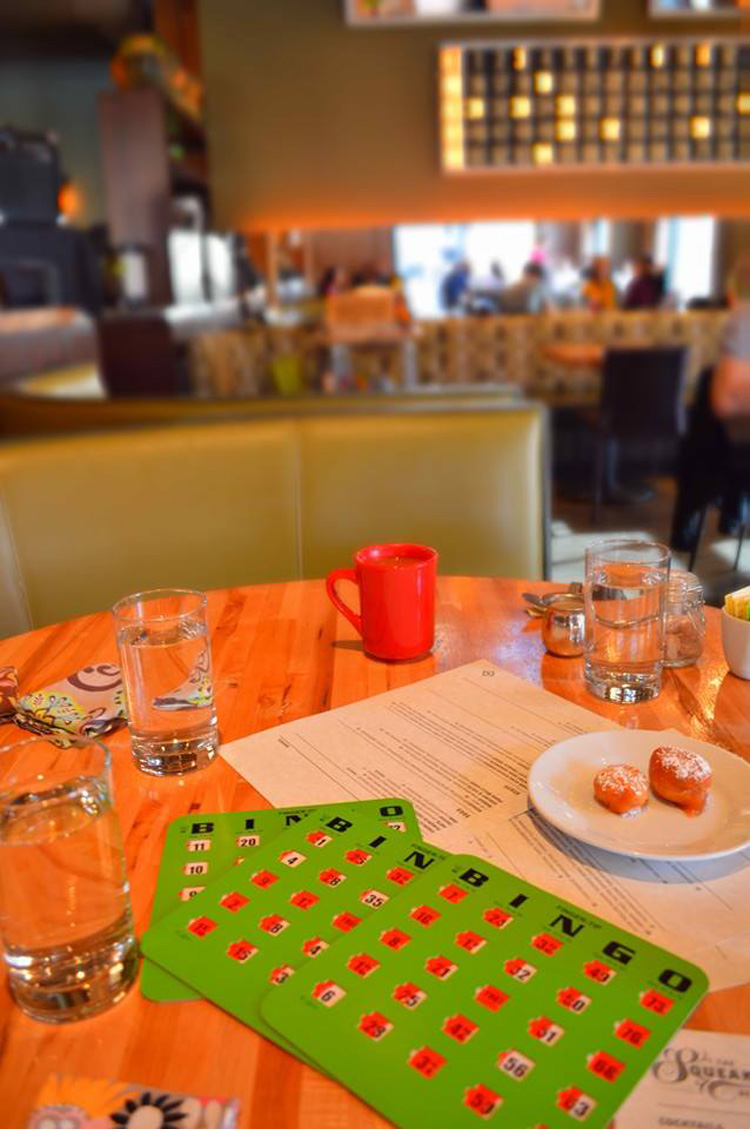 Not your grandmother's bingo, local comedians emcee the raucous and rowdy game every weekend at The Squeaky Bean in Denver. You'll have to get lucky to win malt liquor, actual screw drivers, and the occasional gift card to Casa Bonita (of South Park fame). The a la carte menu varies from shrimp and grits to piping hot monkey bread topped with caramel and Nutella, but it's always farm-to-table fresh. Mimosas and Bloody Marys may be ordered by the jug for $20 to keep the libations flowing.