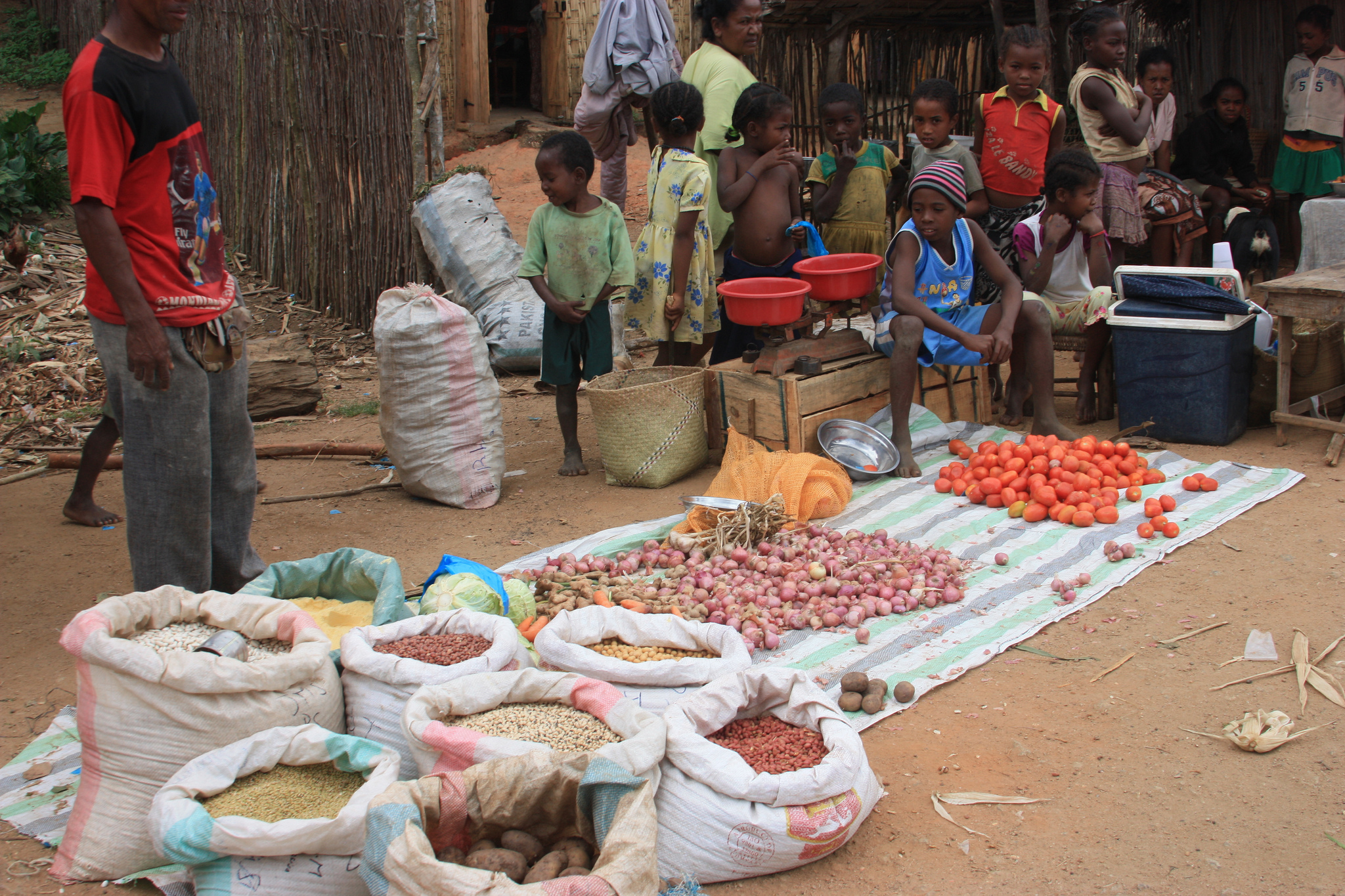 Madagascar cuisine is synonymous with large portions and plenty of spice. The island nation off the southeastern coast of Africa has produced excellent cloves, black pepper and nutmeg, but it was the cultivation of vanilla in the mid-19th century that secured the island's reputation as one of the world's great spice centers. The food in Madagascar incorporates all of these wonderful spices and is based around the Malagasy cuisine, which is a style of cooking that reflects the influences of Southeast Asian, African, Indian, Chinese and European migrants that have settled in the country.

Rice is the main staple of the Malagasy diet and it is usually accompanied by some form of kabaka, which is a protein dish such as fish, meat, chicken, or beans, as well as vegetables, sauces and of course, some spicy seasonings. Other common dishes include ro, which is beef and pork marinated in vinegar, water and oil, then cooked with leaves, onion, pickles and other vegetables and seasoned with pimento, and ravitoto, which is simply meat and leaves cooked together.

Rice can also be accompanied by laoka, which may be vegetarian or include a protein and is typically cooked in sauce often flavored with ginger, onion, garlic, vanilla, curry powder. Laoka recipes are diverse and may include such ingredients as bambara peas with pork, beef or fish, shredded cassava leaves with peanuts, or chicken sautéed with ginger and garlic or simmered in its own juices in a preparation called ritra. In some parts of the island a side dish called romazava is served and consists of green leafy vegetables in a seasoned broth. Side dishes in Madagascar are generally served to add flavor and complement the rice rather than provide nutrients, as the rice is the main star of the show. Romazava is distinguished by its inclusion of anamalao flowers, which produce a mild analgesic effect when the broth is consumed. 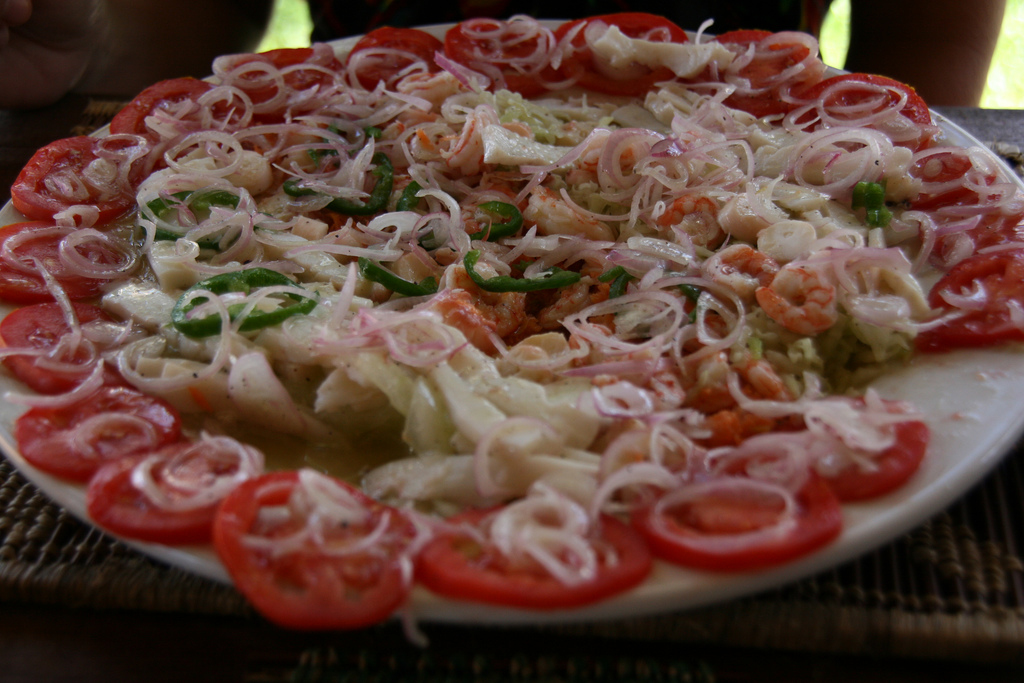 Most Malagasy dishes are prepared in one of four ways: fried, grilled, boiled in water, or cooked with coconut juice and a spicy condiment known as lasary, which is made of chili peppers, green mangos, or lemons, can be added to enhance flavor. Food is generally prepared in a kitchen that is physically separated from the main house for fire safety. Meals are served in the house, on the veranda, or on mats placed on the ground outside the house. Lunch and dinner leftovers are warmed for breakfast the following morning. Breakfast consists of rice and a tea made of local herbs or leaves and sweetened with sugar.

Some alternative breakfast foods include boiled manioc, maize porridge, or fried cakes made of rice flour. Rice may also be prepared with varying amounts of water to produce a fluffy rice used in a soupy rice porridge called vary sosoa that is often served as another breakfast choice. Beverages are limited and water is the usual beverage served with meals. Rano ampango, or water boiled in the rice cooking pot, is sometimes served, as well.

If you're eating on the go, a variety of foods can be found in small kiosks and restaurants throughout Madagascar, most notably a wide selection of cakes and fritters known as mofo. The most common sweet treat is known as "Malagasy bread" and is made from a batter of sweetened rice flour that is poured into greased circular molds and cooked over charcoal. Other sweet mofo fare includes a deep-fried doughnut called menakely and a doughnut hole called mofo baolina. If you're looking for a more savory than sweet dish, try a fritter flavored with chopped greens, onions, tomatoes and chilies called mofo sakay or "spicy bread." Perhaps one of the most well-known sweet delicacies in Madagascar is the Koba akondro that is made by wrapping a batter of ground peanuts, mashed bananas, honey and corn flour in banana leaves and steaming or boiling the small cakes until the batter has set. Other delicious fare found on the streets of Madagascar include bonbon coco's or coconut balls that are made with peanut brittle, dried bananas and tamarind paste rolled in colored sugar, and a snack of deep-fried wonton-type dough called kaka pizon.

Known for producing some of the most superb vanilla and cocoa in the world, it is not surprising that Madagascar has so many sweet confections. Commonly called the "Vanilla Island," vanilla serves as a key ingredient in many of the country's desserts. Dessert in Madagascar is usually fruit flavored with vanilla, which sounds simple but with the number of fruits available in the country, it can often be a delectable choice for travelers. Temperate fruits found in Madagascar include apples, lemons, pumpkins, watermelon, oranges, cherries and strawberries, in addition to many tropical fruits like coconut, tamarind, mango, pineapple, passion fruit, loquats and guava.

If fruit isn't your thing, other desserts include koban-dravina, a Malagasy specialty cake made by grinding together peanuts and brown sugar and then wrapping in banana leaves to caramelize and bonbon coco, a popular candy made from shredded coconut and cooked with caramelized sugar. A firm, cake-like coconut milk pudding known as godro-godro is also a popular dessert among locals and travelers alike.

Whether you are in the mood for a little bit of spice and seasoning in a traditional rice dish or have a sweet tooth and are looking for a bit of flavor with infamous Madagascar vanilla, the island nation offers a wide variety of choices for all curious palates.