The Lure of Indian Cuisine

The smells, the tastes and colors of Indian cuisine enjoy universal appeal and can be found all over the world. In fact in the United Kingdom, the ubiquitous “curry” rates up there with British roast and fish and chips in the national diet. It’s so popular the British Food Standards Agency has estimated that Indian food accounts for two-thirds of all eating out and is enjoyed by about 2.5 million people a week. This kind of trend is repeated in nations across the world that have either adopted Indian cuisine or allowed it to influence regional cooking.

Of course “curry,” a Western term used to refer as a blanket to all the various dishes of the subcontinent, isn’t really used in India at all and there are in fact many types of Indian foods, with wide ranging regional variations. 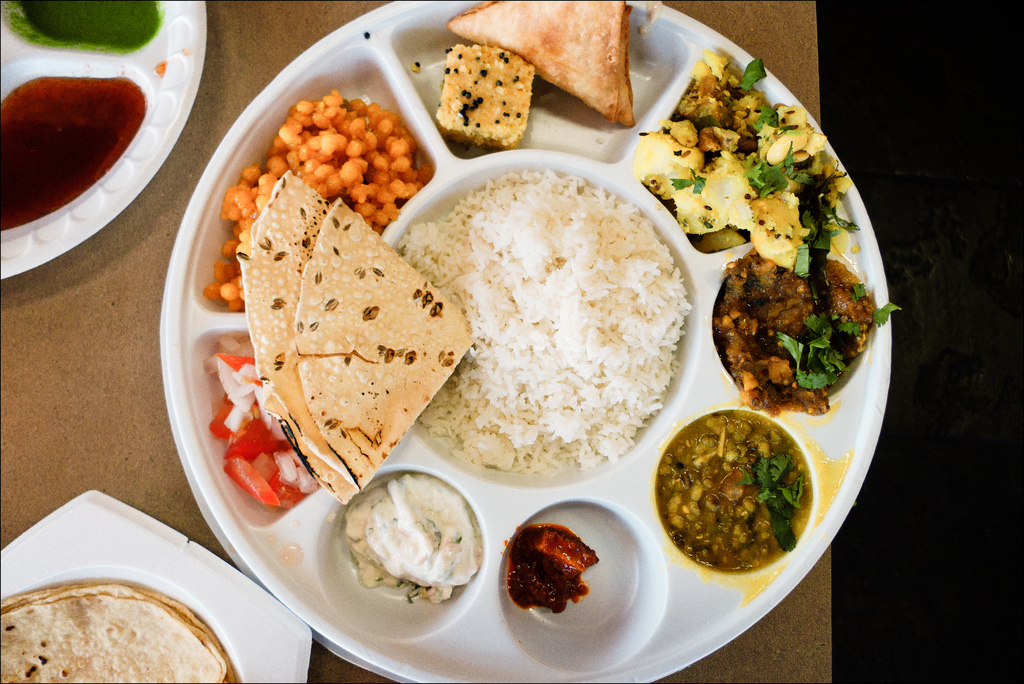 Indian food has developed largely because of religious beliefs and culture. For example it is the influence of Indian Buddhists that is believed to have promoted vegetarian food across the Asian region. The key elements in the cuisine are its spices including ginger, coriander, garlic, cumin, tumeric, black mustard seed, chili pepper and coriander (garam masala is actually a spice mix).

Indian food specialties extend from their breads and salads, to both meat and vegetarian dishes of lentil and bean variety, vegetables, desserts and even drinks.

India’s flat breads are commonly called roti but even here there are different types. Chapati is an unleavened flat bread made from wheat flour and cooked on a flat skillet. It is found throughout the country and often used to scoop up meat or vegetables that are otherwise eaten by hand. Paratha is also unleavened and made from whole wheat flour but is usually stuffed with vegetables and cooked with oil. It comes from the Punjab region and is also popular in Pakistan. It is often eaten at breakfast time.

Naan is leavened and oven-baked and is found in north India, Afghanistan, Iran, Pakistan and the Xinjiang region of China. It is cooked in tandoor clay ovens and is best eaten with tandoor-cooked meats, as well.

In southern India you will find idli, a savory cake, and the crepe-like dosa, which are often eaten for breakfast. The oily puri is another south Indian bread, prepared from atta (an Indian flour) and salt and fried in ghee. It is eaten at breakfast or as a snack.

A variety of lentil dishes (dhal) are eaten across the country, although they are particularly popular in places like Gujurat where the population is predominantly Hindu and vegetarian. The thali is a popular vegetarian meal found here that is made up of a selection of dishes with rice, lentils, vegetables, chapati, curd and chutney.

Butter chicken and tandoori chicken are traditionally foods from North India and possibly some of India’s most famous food exports. A lot of goat and lamb is used in northern cooking and dishes tend to be milder, smoother and richer, which maybe why they appeal to the Western palate. While southern coastal regions rely on rice, coconut and fish.

If you love sweets, no doubt you’ll have come across India’s numerous specialties such as gulab jamun, jalebi, kulfi, barfi or laddu. Some are an acquired taste and generally considered too sweet or milky for the Western palate. Sweets are often shared in copious quantities around the Diwali festival of lights in September/October.

Indian tea, chai, is another sweet concoction and made by boiling the tea leaves, spices, milk and sugar altogether. The spices used can vary from state to state but may include masala, cardamom, cloves, cinnamon, ginger or black pepper, again not all are to everyone’s taste. If you’re travelling around India you’ll often hear cries of garam chai (hot tea) on railway stations or carriages which sells for just a few rupees per cup. Coffee, prepared in a similar fashion to tea, is more commonly drunk in the south.

If you’re in India or at a more traditional restaurant you might find yourself seated on the floor or low stools/cushions, eating with your hands. If this be the case, always use your right hand and utilize the bread to scoop lentils, rice and meat with. South Indian restaurants may serve their food on large banana leaves.

If you’re new to Indian cuisine always go easy on the spices and chillis as they can have some rather nasty side effects beyond the tingling in the mouth. Remember accompanying dishes like the curds (yoghurt) and drinks are often served to lessen the effects of spicy foods.