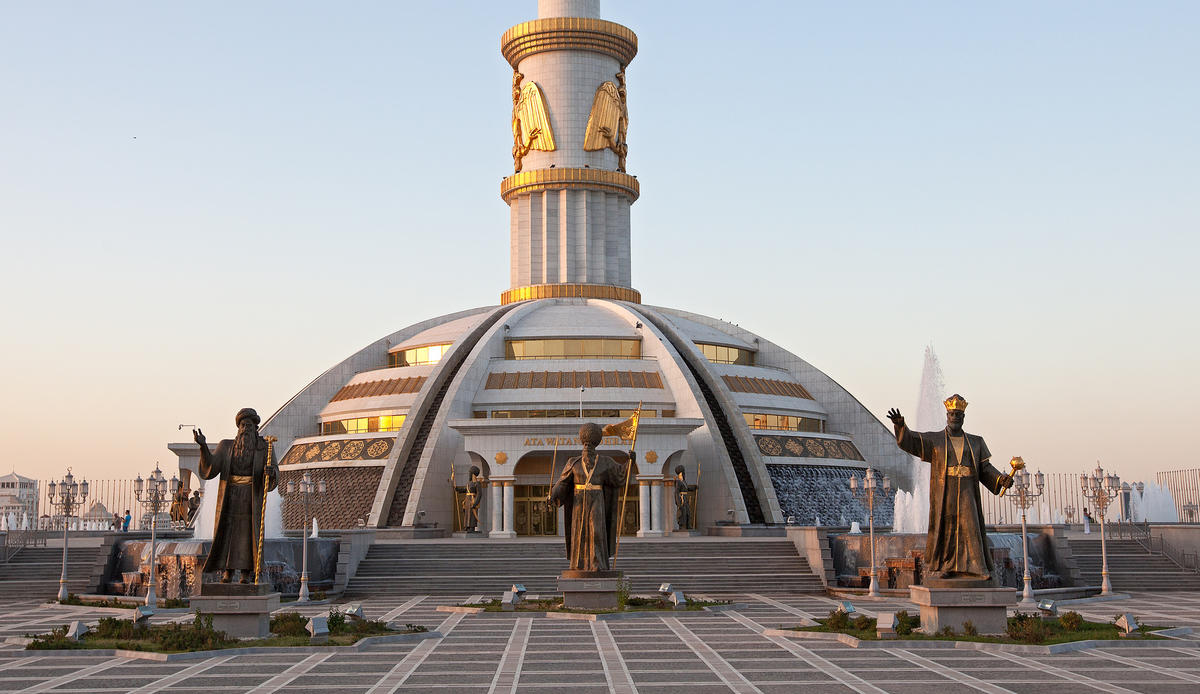 Turkmenistan boasts three UNESCO World Heritage sites, while eight more sites have been agreed by the United Nations to reach the tentative list. Most of these sites were not recognizes until as recently as 1998, but this is not a reflection of their history. The cultural sites are some of the earliest known forms of civilization, such as at the Parthian Fortress of Nisa. History goes back even further to reveal dinosaur fossils at Koytendag. Although perhaps the most prominent reminder of history and the important part Turkmenistan once played in global society are the ruins at Merv, an ancient trading post along the old Silk Road.

This was an ancient city along the old Silk Road, and the remains were proclaimed as a UNESCO World Heritage site in 1999. The Silk Road was a 4,000-mile long route stretching from China to Istanbul, in Turkey. Trade began as far back as 206 BC and continued until around 1450 AD, when other routes for transporting goods began to take over. As the name of the route suggests, delicate silk fabrics were the main goods hauled over the land route to the gateway of Europe, but many other goods were transported and traded along the way. The route went right through the heart of Turkmenistan, and Merv was an extremely important trading post. It is estimated that Merv was briefly the largest city in the world at one time in the 12th century due to the importance of the Silk Road. In addition, several cities have existed on the same site, adding to its cultural and historical appeal. Address: Merv, Mary Province, southeastern Turkmenistan Phone: n/a Website: http://whc.unesco.org/en/list/886

The ruins of this city date back to around 220 BC and are believed to be by some historians the remains of the first capital of the Parthian kingdom. The Parthians were a tribe who descended from the Persian people. It is not known whether the fortress at Nisa was a designated royal residence or a mausoleum. However, excavations here have uncovered much Hellenistic art, coins, and ivory drinking vessels. The ruins were proclaimed a UNESCO World Heritage site in 2007. Address: Parthian Fortress of Nisa, Akhal Province, central Turkmenistan Phone: n/a Website: http://whc.unesco.org/en/list/1242

This ancient city was once the capital of the Khorezm region, which was part of the Achaemenid Empire, dating back to the 11th century AD. The magnificent architecture preserved here earned the city UNESCO World Heritage site status in 2007. The main attraction is the 200ft tall minaret, built in the style that influenced Iran and Afghanistan, and was further adopted by the Mogul Empire of India in the 16th century. Address: Kunya-Urgench, Dashoguz Province, northwestern Turkmenistan Phone: n/a Website: http://whc.unesco.org/en/list/1199

Dehistan is an ancient oasis that existed along a trade route from Iran. Merchants traveling in caravans would stop here along the way to rest and feed their camels and horses. However, archaeologists have uncovered human existence in the area as far back as the primitive Bronze Age. The site was abandoned in the 15th century and remnants from the period preceding this include a minaret and a mosque. It was marked on the tentative list of UNESCO World Heritage sites in 1998. Address: Dehistan, Balkan Province, western Turkmenistan Phone: n/a Website: n/a

Dinosaur Fossils and Caves of Koytendag

Today, the site is a nature reserve that is home to the rare heptners markhor, a sort of cross between a goat and an antelope. The nature reserve is the only place where you can see this rare animal in the wild. The area is also famous for its dinosaur fossils and there is evidence of prehistory in the mystical caves which you can clamber into. The area was included on the tentative list of UNESCO World Heritage sites in 2009. Address: Koytendag Nature Reserve, Lebap Province, eastern Turkmenistan Phone: n/a Website: http://www.natureprotection.gov.tm/reserve_tm.html

Although at an extremely remote location in the Karakum desert, this magnificent spot is now becoming a must-see destination for visitors to Turkmenistan. As if out of nowhere, the landscape plummets in front of your eyes to reveal this canyon, where the desert then continues below. Almost like buttresses supporting the canyon walls, millennia of natural erosion has revealed this huge canyon. It is a spectacular site, and most organized tours around Turkmenistan now include it on their itineraries since it has proven so popular with tourists. Address: Yangkala Canyon, central Turkmenistan Phone: n/a Website: n/a