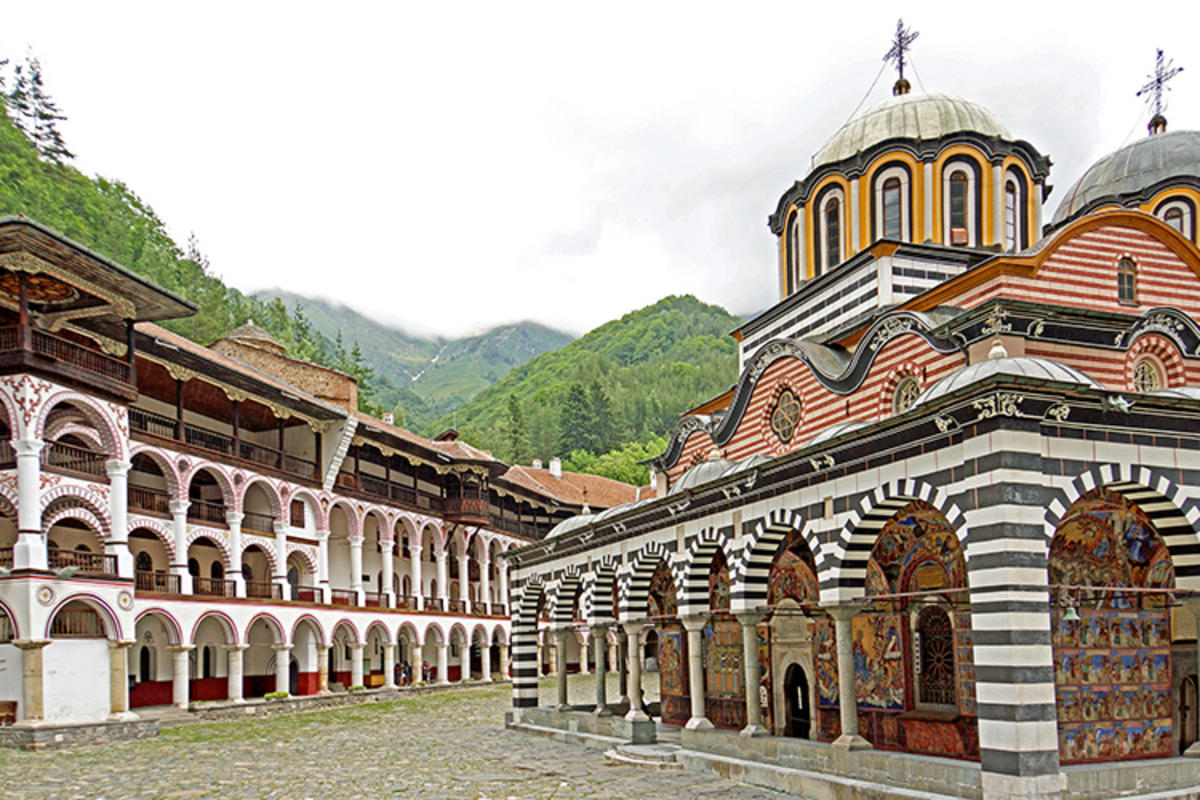 Bulgaria’s long history of invasions has resulted in a number of fascinating historical sites ranging from ancient Roman theaters to medieval forts and churches, to beautiful Renaissance buildings. The natural landscape of the nation has many attractions to offer from the glacial lakes in the national parks to the rock formations at Belogradchik.

Located in Bulgaria’s capital, Sofia, The Aleksander Nevski Cathedral is one of the city’s most famous landmarks. The beautiful multi-domed neo-Byzantine building was constructed between 1882 and 1912 and decorated with alabaster, Italian marble and Brazilian onyx. It is one of the biggest Eastern Orthodox churches on the planet and features a 174-foot high bell-tower with twelve chimes. There is an icon museum in the crypt. The cathedral is open Wednesday to Monday from 7:00 a.m. to 5:30 p.m. Address: Aleksander Nveski Square, Sofia Phone: +359-2-981-5775 Website: n/a

The UNESCO World Heritage Rila Monastery was built on the site of the former dwelling and tomb of canonized hermit St John of Rila. The 10th century complex has been expanded, and included a major rebuild following a fire in the nineteenth century. The 1834-1862 additions are characteristic of the Bulgarian Renaissance period and known for their frescoes, statues and wooden carvings. Address: Rila, Bulgaria (about 75 miles from Sofia on the E-79) Phone: +359-7-054-2208 Website: http://www.rilamonastery.pmg-blg.com/Home_page_en.htm

This UNESCO World Heritage site in Sofia is actually three churches that were built in the 10th, 13th and 19th centuries. Sitting at the foot of Mount Vitosha, the well-preserved complex is best known for its frescoes from different periods which adorn the walls throughout, with the 1259 images considered the most artistically significant. Access is by guided tour from 9:30 a.m. to 5:00 p.m. daily, which may be extended in the summer season. Address: 1-3 Boyansko Ezero St., Boyana Quarter, Sofia, Bulgaria Phone: +359-2-959-0939 Website: http://www.boyanachurch.org/contacten.htm

The visually stunning Belogradchik Fortress was used as a military installation from Roman times through the Serbian war in 1885. Three separate yards covers an area of 109,900 square feet and incorporate some of the Belogradchik Rocks, a natural wonder of Bulgaria. The fort is one of the best-preserved strongholds in the country and is a nationally important monument and tourist attraction. The site is open daily from 9:00 a.m. to 6:00 p.m. (summer) or 5:00 p.m. (winter). Address: Belogradchik, Bulgaria Phone: +359-9-365-3001 Website: n/a

The charming central northern Bulgarian town of Veliko Turnovo was the capital at the time of the second kingdom when it housed the royal and patriarchal palaces from 1185 to 1393. The hill complex is surrounded by thick walls with two gates, two towers and a drawbridge. The reconstructed 1981 Patriarchal Cathedral of the Holy Ascension of God has striking modernist frescoes and in the evenings, there is an extensive light show accompanied by music and bells that tell the story of the fall of Tarnovo and the Ottomans. Address: Tsarevets Castle, Tsarevets Hill, Veliko Tarnovo Phone: +359-6-2622-148 Website: http://veliko-tarnovo.net/?cat=54

Northeastern Bulgaria is home to the Srebarna Nature Reserve, an area that is also a UNESCO World Heritage site for its beauty. The shallow Lake Srebarna is one of the main features of the park as are the many birds that habitat the area or stop by on their migration between Africa and Europe. There is a museum which features stuffed samples of species that can be found here. Address: Srebarna, Silistra Province Phone: NA Website: http://whc.unesco.org/en/list/219

The ancient Roman Theater of Philippopolis in Plovdiv is a well-preserved site dating back to the 2nd century AD which is now a major tourist attraction. It was excavated and reconstructed after being rediscovered in landslide in the 1970’s. The theatre holds seating for 7,000, Greek inscriptions, a vaulted stage and fa√ßade, orchestra section, passages and gates. In summer, the venue hosts a number of plays and concerts. Address: Roman Theatre of Philippopolis, Tzar Ivaylo Str, Old Town, Plovdiv Phone: +359-3-263-4008 Website: n/a

Click here to learn about Food and Restaurants in Bulgaria