Time travel may be the stuff of sci-fi, but you can get pretty close to the experience by visiting Petra in Jordan. You may remember the massive archeological site from “Indiana Jones and the Last Crusade,” when Harrison Ford and Sean Connery travel through the Siq (a canyon that serves as the entry to the city) to the epic Treasury building. While archaeologists have been able to determine a lot about the rose-colored city, which was the capital of the Nabataean empire as early as 400 BC, there’s still so much left to uncover (in fact, a huge monument was just discovered earlier this year). It’s this mystique combined with a one-of-a-kind glimpse into ancient history that entice more than 500,000 visitors to make the pilgrimage to Petra each year.

Because places this epic should be on every traveler’s bucket list, we have your insider’s guide to making the most of a trip to Petra. 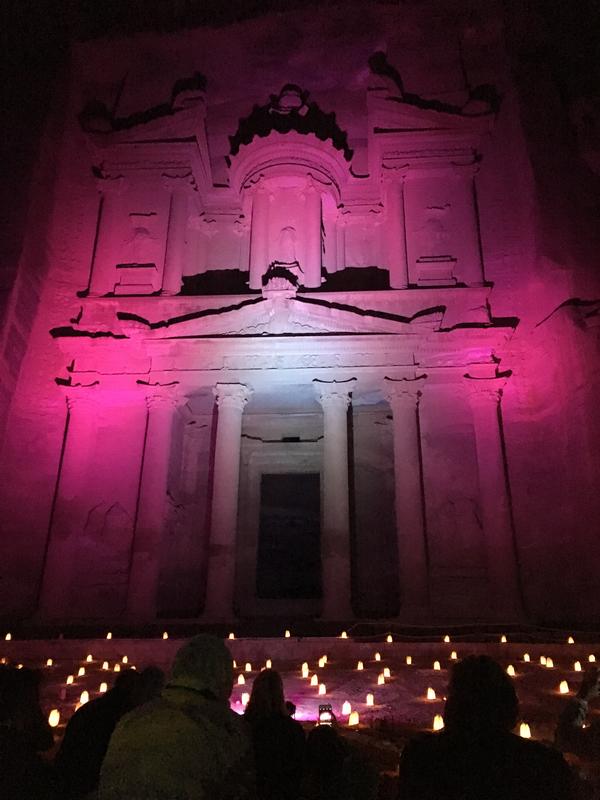 Petra goes back—waaaaay back. The remains of Neolithic villages on Petra’s hillsides prove the area was inhabited as early as 7000 BC. However, the Nabataeans, a nomadic tribe that wandered the Arabian Desert, are credited with giving Petra its distinctive Hellenistic splendor. They arrived in the 6th century BC and turned Petra into a bustling caravan city. In the early 1st century AD, the city's population peaked at about 30,000 hardworking, creative people who built its awe-inspiring monuments and conducted a booming business in the spice and incense trade. They also created the infrastructure to bring water to all inhabitants — not an easy feat in the Middle East — which allowed the city to thrive.

Shifting trade routes moved traveling caravans out of Petra toward the end of the 1st century, but the Romans took control of the fading Nabataean empire and ensured the survival of the city through the 3rd century AD. Modern travelers can see the Roman influence firsthand at Petra’s baths and columns lining the streets.

Disaster struck in 363, when a major earthquake destroyed much of the city and forced out its inhabitants. A second large quake rocked the area again 200 years later, destroying much of the architecture. It remained virtually unknown outside local Bedouin communities until Swiss explorer Jean Louis Burckhardt “rediscovered” the lost city in 1812. Petra has enchanted countless archeologists over the years, who continue to excavate sites and study the city’s influence on ancient civilizations. The city became a UNESCO World Heritage Site in 1985 and some believe that as little of 15 percent has been unearthed so far.

With more than 800 registered sites sprawling across 102 square miles, Petra Archaeological Park has enough fascinating places to keep you busy for an entire week. If you don’t have that kind of time, here are sites you absolutely cannot miss. Tip: While Petra is safe and easy to navigate on your own, multilingual tour guides at the visitor center can enrich your experience and provide essential background information. 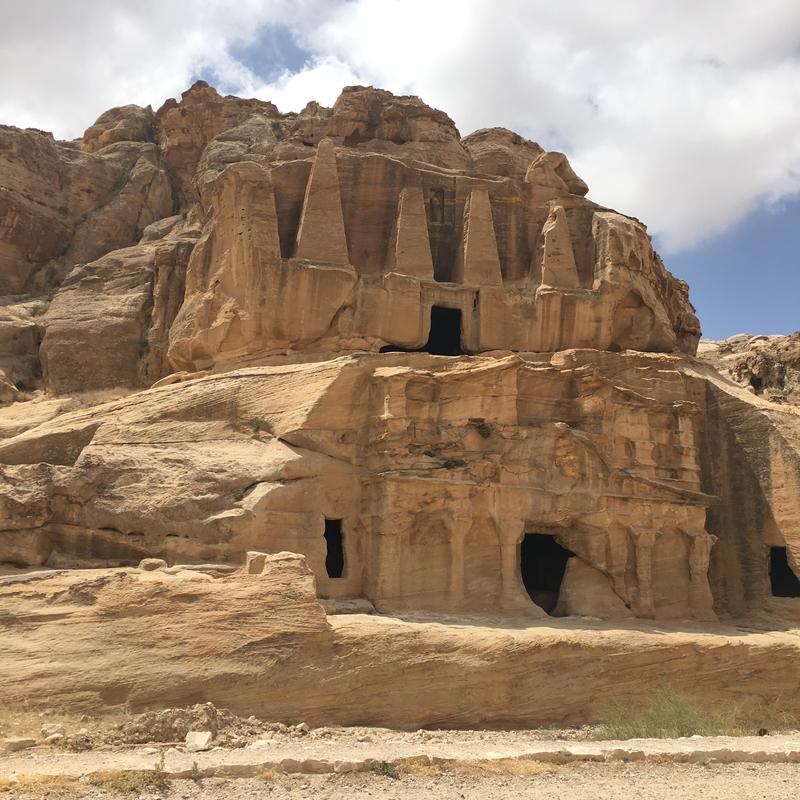 Bab as-Siq: You don’t have to wait to get into the heart of the city to start your adventure. The Bab as-Siq, a downhill walk to the Siq, contains three huge structures called Djinn Blocks, which may have served as tombs for the Nabataeans. Just down the road, you’ll spot a more impressive structure, known as the Obelisk Tomb. Built as a tribute to the deceased, the site features a ritual dining hall and a traditional tomb on the second level. An eroded carving of a person at the top humanizes the space. 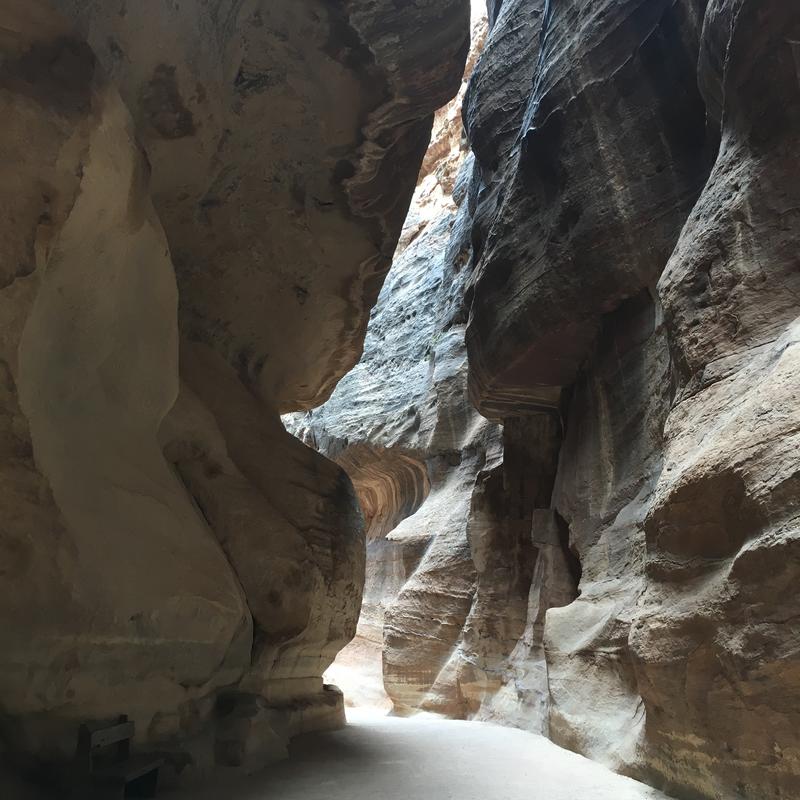 Siq: The entrance to Petra is actually one of the biggest highlights of the experience. You’ll walk through a narrow, imposing canyon, made of smooth, sculpted rocks that guide you to the hidden city. It’s filled with interesting features that teach you about Petra’s ancient inhabitants. Take note of the pipes and gutters along the walls — these important components channeled water into the city. Look down and you’ll see stones worn by thousands of chariots and wagons that once zoomed through this narrow passageway. The walls contain small alcoves that once held religious relics to remind visitors they're entering a sacred city. The manmade structures are just as impressive as the natural pathway. 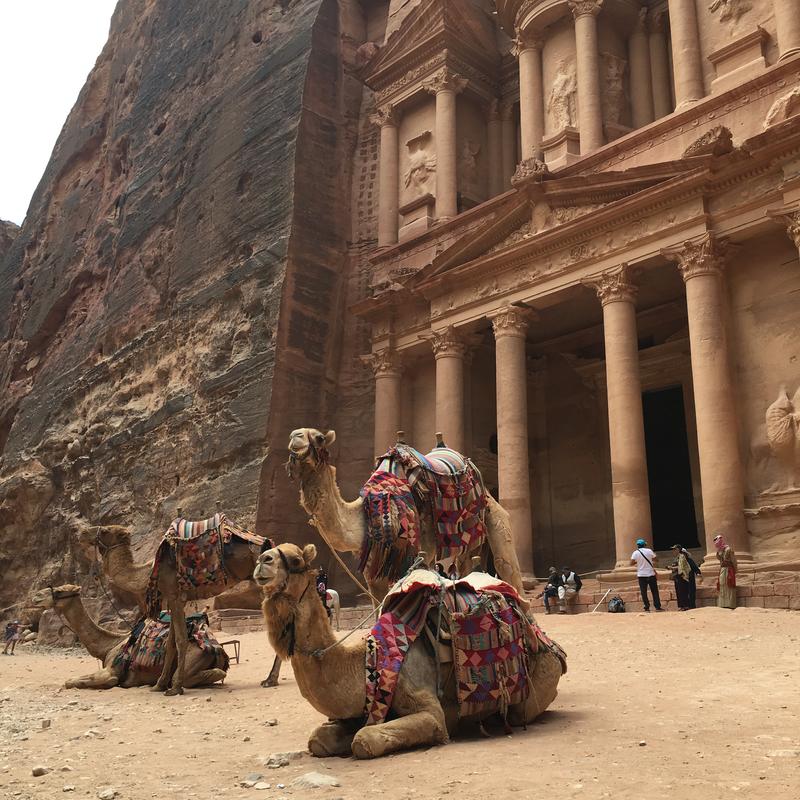 Al-Khazneh: As the most iconic site in Petra, Al-Khazneh (the Treasury) is the monument at the top of most visitors' itineraries. "Treasury" is a misnomer for this beautiful Hellenistic façade, which actually served as a tomb for a Nabataean king. The rose-colored carving’s moniker stems from an ancient legend that an Egyptian pharaoh buried his treasure here. This part of Petra can also be viewed after-hours at the Petra At Night Show. The memorable experience features Petra gently lit by more than 1,500 candles and includes a spectacular light and music show.

Theater: With a seating capacity of around 8,500, the Theater is impossible to miss. The round venue with chiseled stone seats originally sat 3,000, but the Romans more than doubled its size by slicing through old tombs and caves as the city grew. The majestic site gives a sense of just how imposing and vibrant the city was in it's heyday. 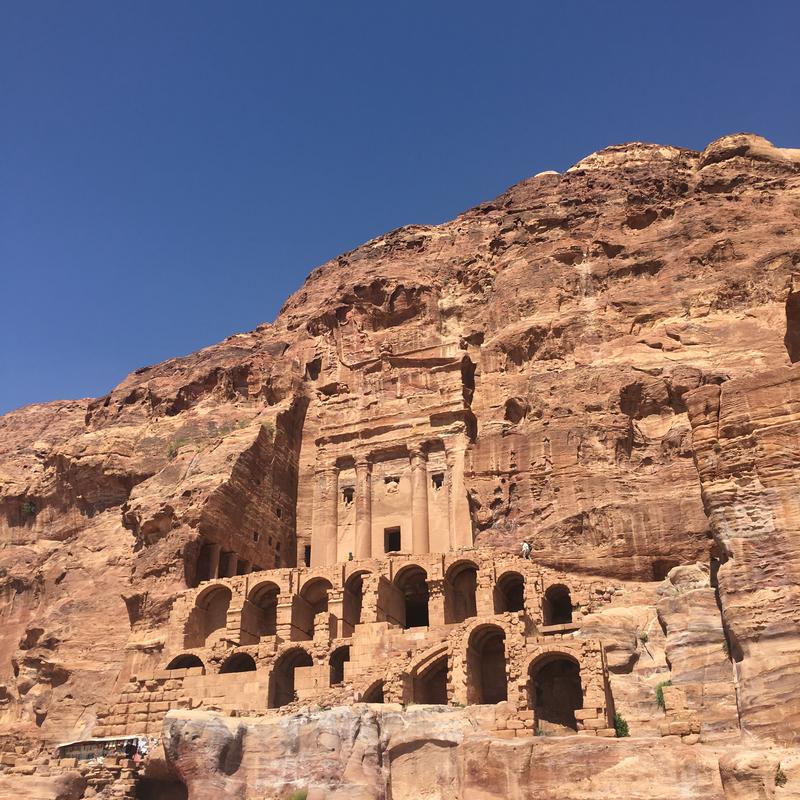 Royal Tombs: Four distinct tombs are a short, tough climb from the valley floor, just beyond the Theater. While the tombs themselves are worth wandering through, the real reason to make this hike is for the panoramic view from the top. This is the perfect spot to set up a picnic lunch and take in the scenery. 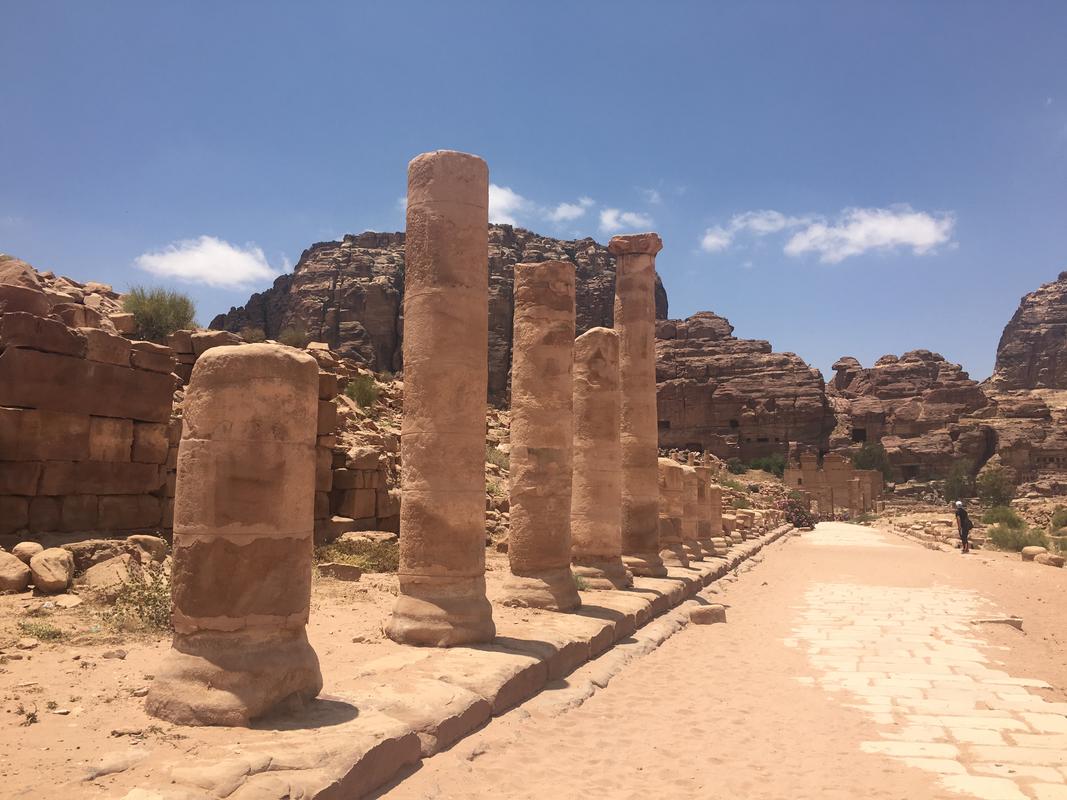 Colonnaded Street: No other place brings Petra to life quite the Colonnaded Street. The remains of what was once an arched entranceway still provide a dramatic entrance to the city center. Earthquakes brought the street’s signature columns to the ground, but reconstruction efforts have re-erected some of them to recreate the mood. Archeological treasures, like the Nymphaeum (a fountain shadowed by a 450-year-old pistachio tree), the Royal Palace, and the Grand Temple of the Winged Lions, give an up-close view of the daily lives of its residents. 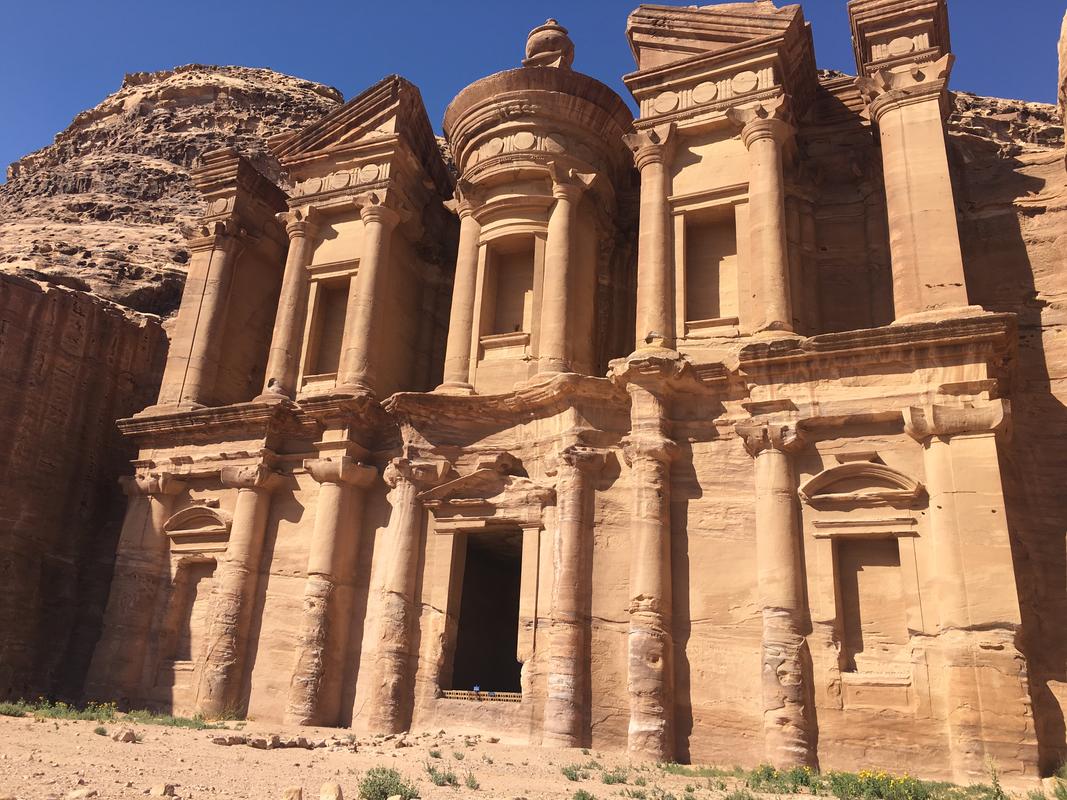 Al-Deir: I’ll admit — I almost didn’t make it to Al-Deir (the Monastery). The more than 800 hand-hewn steps through the hills victimize even the fittest of travelers. That said, the experience is worth the harrowing journey. The elegant, rose-colored structure, carved straight into the mountain side, looks more like a miniature (though no less beautiful) version the Treasury. The flat plaza out front suggests thousands of people used to gather here for rituals. Even more unforgettable than seeing structure was accepting an invitation to drink tea with the friendly, laid-back Bedouin family who lives nearby.

Some advanced preparation will help you weather Petra’s harsh conditions. Be sure to wear comfortable sneakers or hiking shoes to traverse the hills of loose rock. As for attire, stick to loose, conservative layers. A light jacket will keep you warm during the chilly mornings, while linen trousers and a t-shirt will protect you from the harsh sun of the afternoon. Sunglasses and a hat will quickly become your most valuable assets.

Use a small backpack to keep your hands free to help you navigate the site. Pack a few bottles of water and snacks to bring with (you can replenish these supplies at the site). It’s worth preparing a decent lunch to carry with you — while there are a few restaurants at Petra, they are touristy in price and quality. Extra sunscreen and a small first aid kit with bandages and blister treatment will also come in handy. Don’t forget your selfie stick. It may look silly, but you’ll be glad to have photos of yourself in this unforgettable place.

Be mindful of your souvenir purchases within the site. Small shops throughout Petra offer the usual trinkets, from magnets to jewelry, that will help you remember your trip and support local Bedouin families. Avoid purchasing the colorful stones at many of the shops, which likely have been chipped away from the historic structures. This helps ensure Petra’s survival for the next generation.