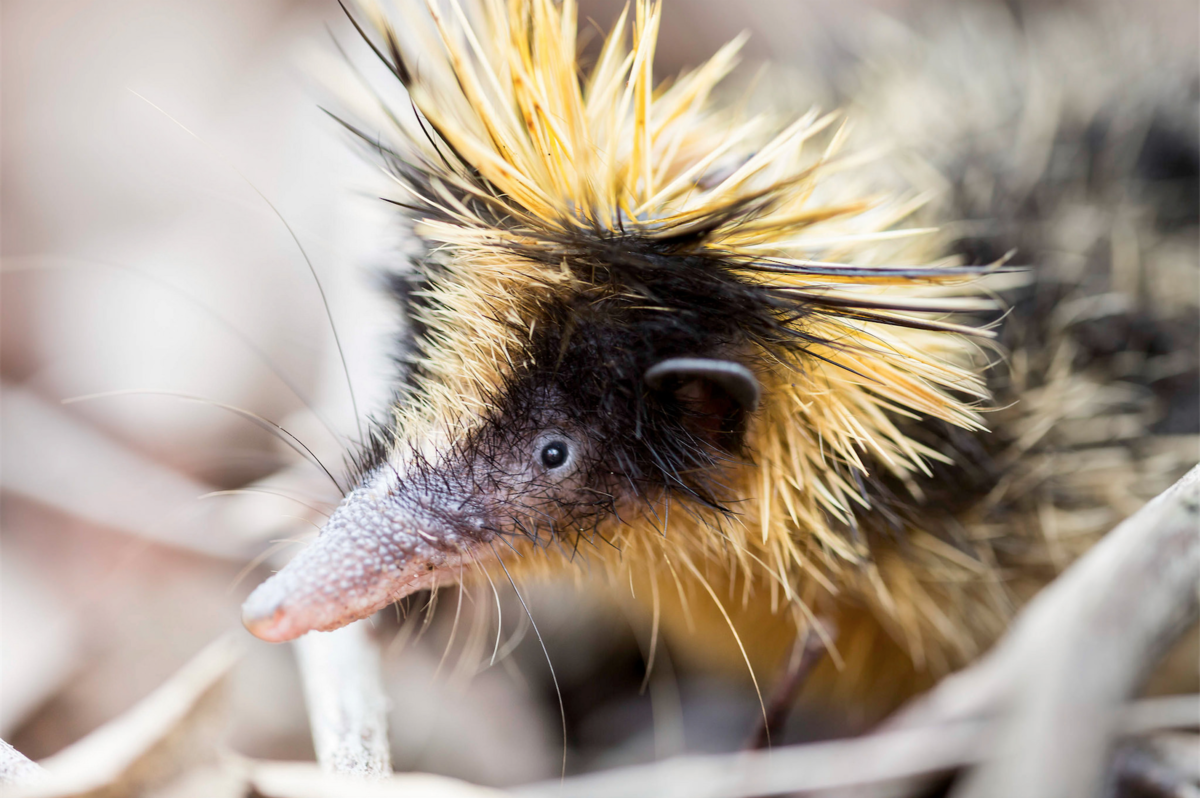 You don't need need a magic wand or time-traveling device to find weird and extraordinary creatures, in fact, there a lot of animals so bizarre they appear to have come from another planet entirely. These creatures have evolved to survive, adapting to a specific region, climate, diet, or purpose. They may look unreal but — we promise — they all truly exist.

Some you’ll find adorable. Others, terrifying. But they are all peculiar in one way or another. Perhaps, somewhere along your travels you’ll run into some of these strange beasts… but be warned: not all are cute and cuddly. 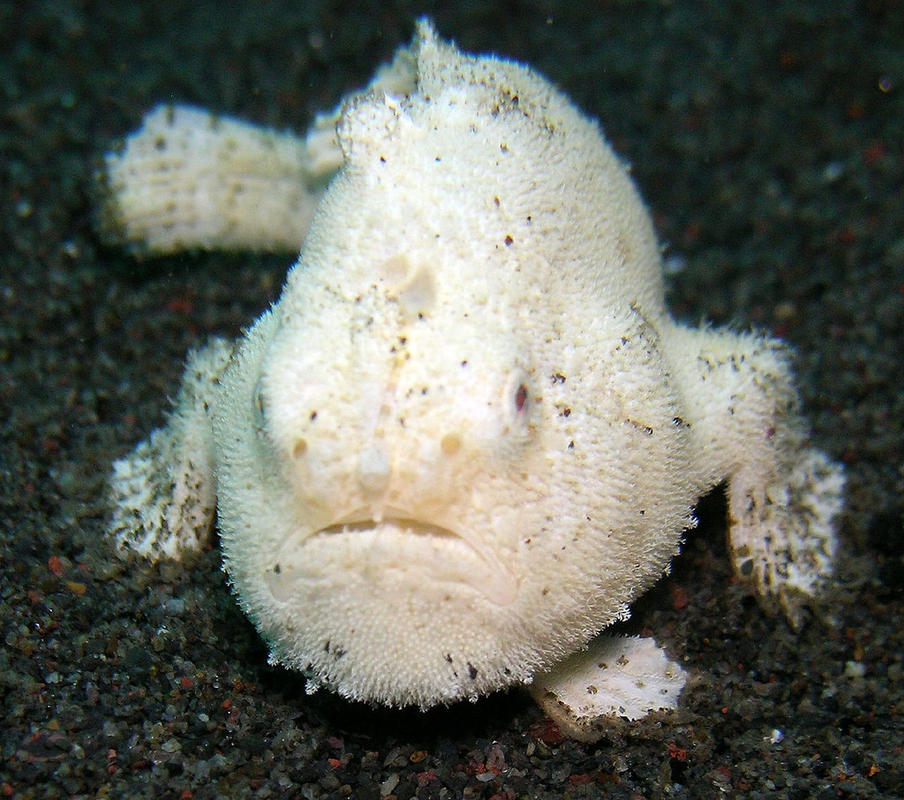 Below the placid tropical coastal waters of the Indian and Pacific Oceans, lurks a colorful, tousled looking creature, the Shaggy Frogfish. They inhabit rocky coral reefs close to the surface or muddy habitats deeper underwater, and get their name from the multitude of thin appendages that so closely resemble hair. The antennarius hispidus (as it is known to the scientific community) gobbles up any and all of the smaller fish it can suck into its gaping mouth so most other marine creatures do their best to avoid the beast, confining them to a bit of a solitary life. 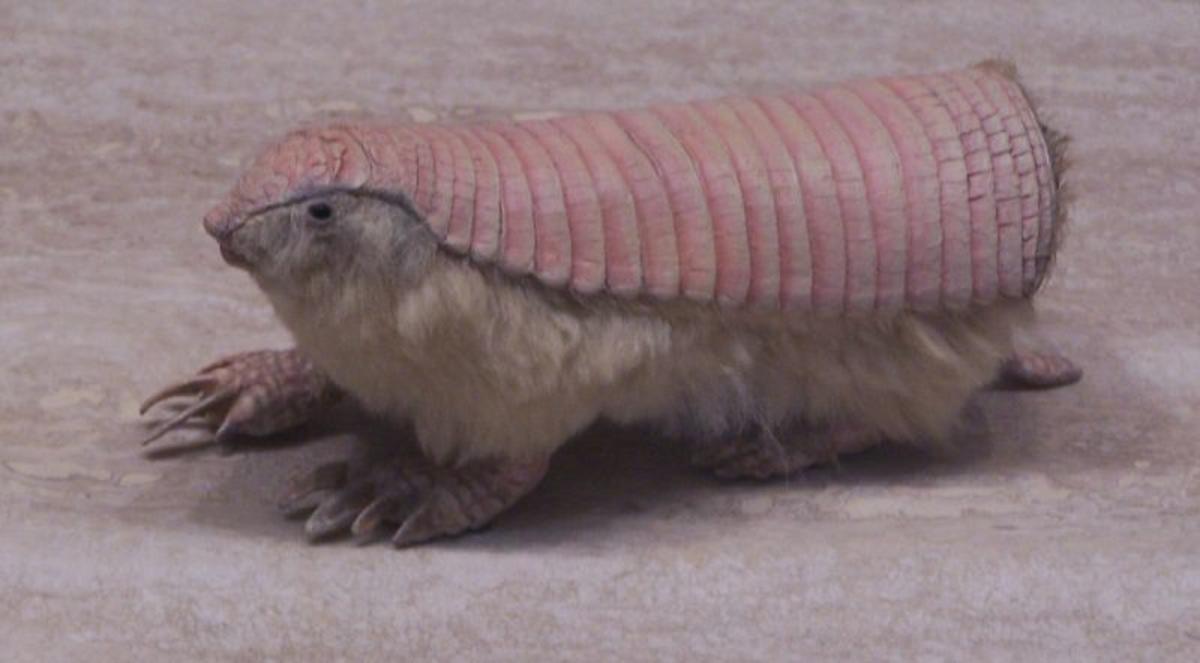 Bearing resemblance to those little pink classroom erasers in both color and size, the Pink Fairy Armadillo, or pichiciego, is the smallest known species of armadillo in the world. Three to four inches in length, they have a silky yellow fur, a flat spatula-like tail, and a pink dorsal shell. You can only find these little buggers in a few regions of central Argentina. They are rare, and very difficult to spot so consider yourself lucky if you cross paths. Pink fairy armadillos are nocturnal burrowers, so not only do they live underground, but they are only active after dark. But fear not, should you encounter one, they survive strictly on a diet of bugs and larvae. They are harmless toward humans... as far as we know. 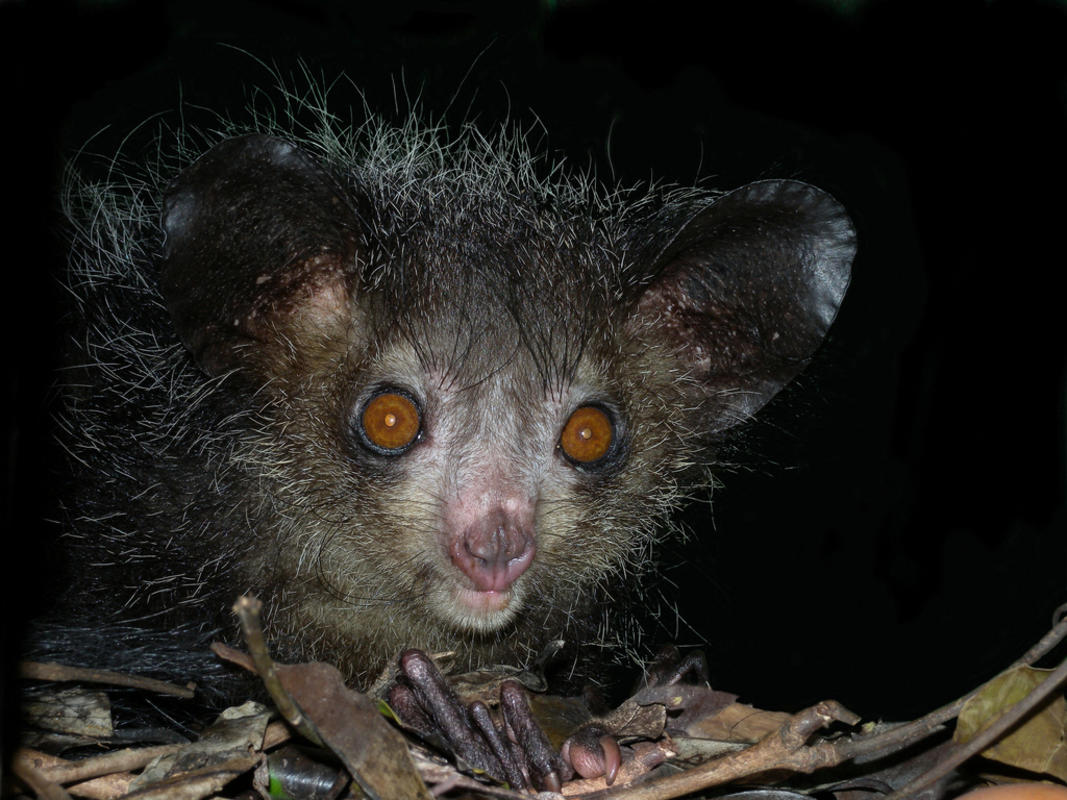 Some say this lemur is the manifestation of child nightmares, others say it evolved from rodents, and still some believe it is a distant relative of primates like us. While the origins of this freakish mammal are debated, what is certain is that the Aye-aye (Daubentonia madagascariensis) is a nocturnal, tree dwelling creature that eats seeds, fruits, nectar, and bugs. Its hunting and gathering method is particularly strange. Like the woodpecker, the aye-aye uses “percussive foraging” to find its food. This means it spends its nights rapidly knocking on tree trunks (8-10 times per second) until the sound notifies them of a chamber of grubs. It then gnaws at the wood, exposes the insects and uses its perfectly adapted bony middle fingers to extract the catch of the day. 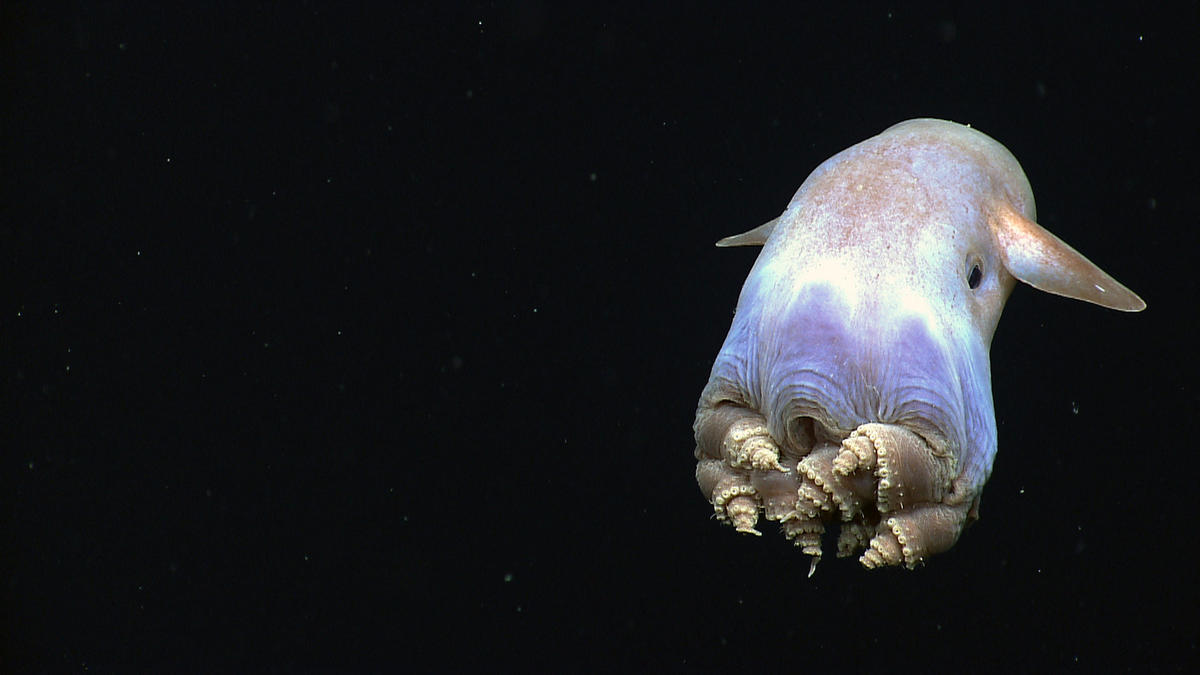 Like you may have guessed, this remarkable mini octopus is in fact named after Dumbo the elephant, thanks to it's oddly proportioned wing-shaped ears that seem way too big for its body. They live only at extreme depths in the oceans, up to 7,000 meters below the surface. As a result, it is the deepest known dwelling octopus (although they occupy a wide range of depths and temperatures). The Dumbo Octopus grows to 7-12 inches in length and can flush their transparent skin at will and come in an array of bright colors including red, orange, blue, and sometimes even purple. 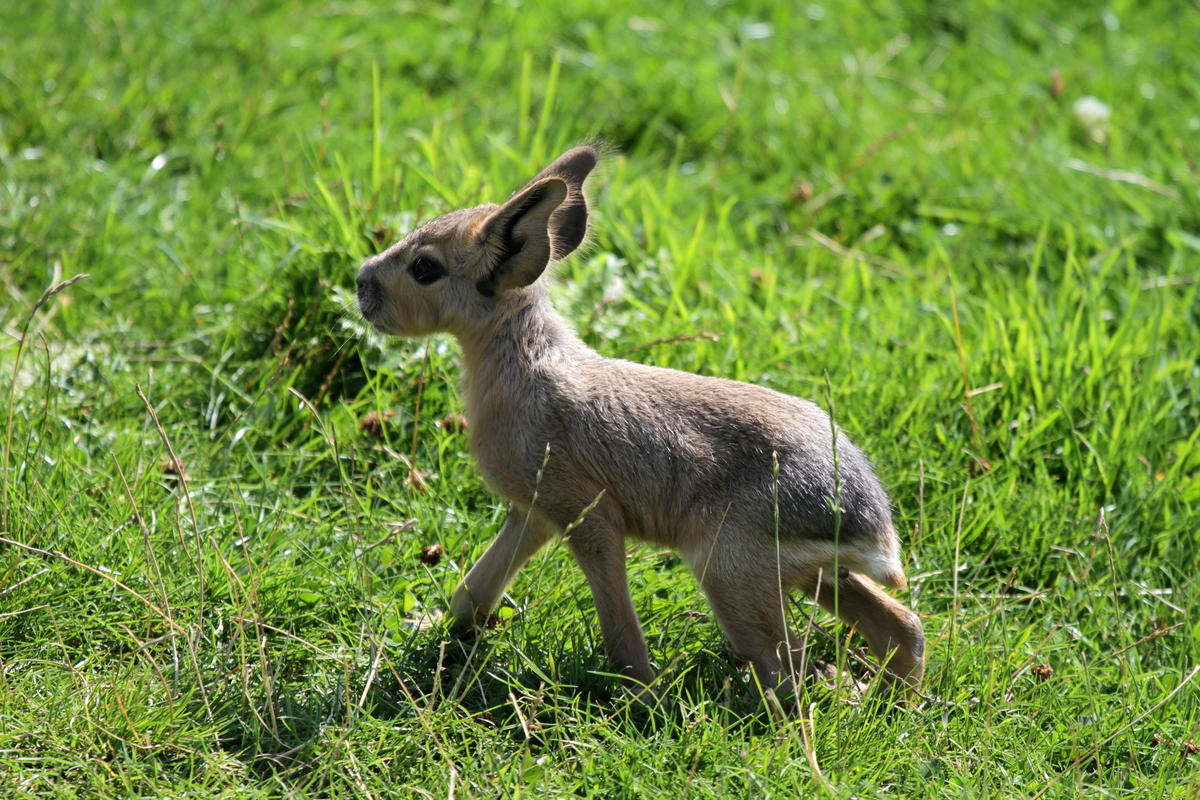 Sadly, the Jackalope didn’t make it onto this list, but the Patagonia Mara is about as close as it gets. A mix between a rabbit, a dog, and a small deer, this creature can be found in open habitats throughout much of Patagonia. Characterized by their ‘hoofed’ feet, short, hairless tails, white bellies, and orange flanks, they are a near endangered species due to excess hunting of their soft fur. Nevertheless, the little buggers survive by digging dens and maintaining semi-monogamous relationships to breed (as the saying goes) like rabbits — just not quite as fast.

If Pumba from the Lion King was a character in the Lord of the Rings, he would probably look a lot like the Babirusa, or deer-pig. They are indigenous to Indonesia, and have wicked looking canine tusks that actually pierce the flesh of their snouts. They look truly prehistoric - like something a caveman would have hunted. In fact, their skulls are so frightening that they are the inspiration for the demonic masks used in local cultural festivals. While they are a protected species, poaching is still a big problem and commercial logging has cut into their habitats significantly, reducing their cover and making them more vulnerable to human hunters. 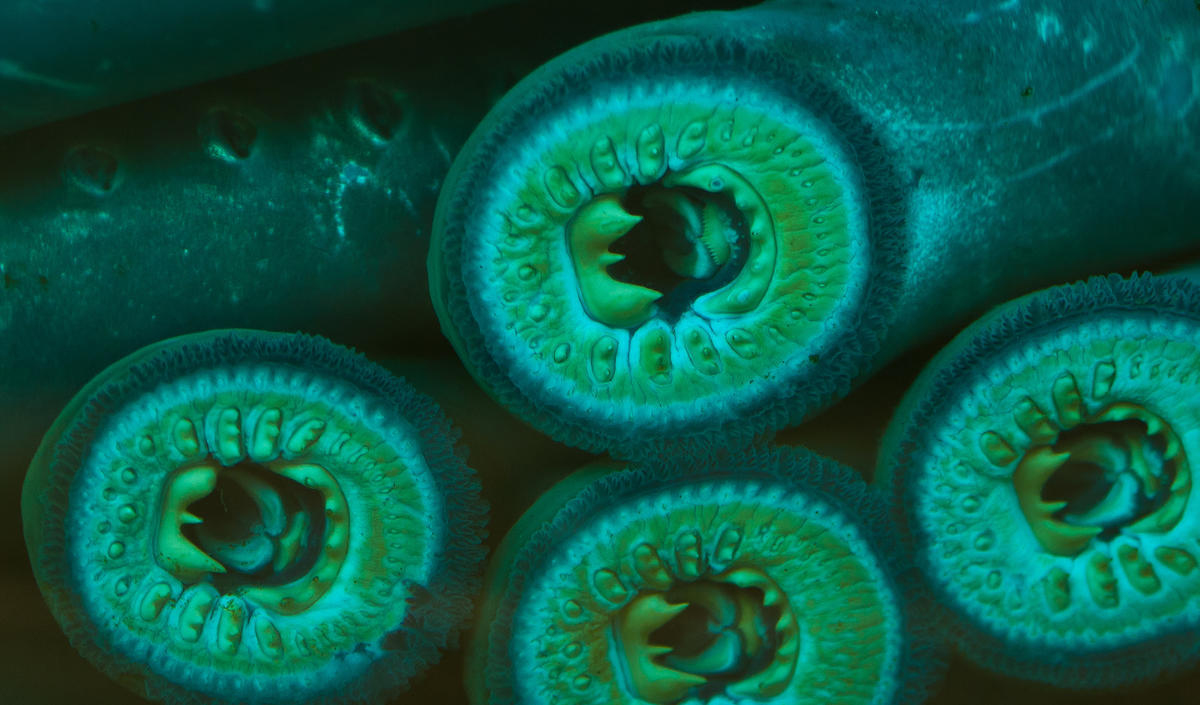 The Lamprey is what nightmares are made of. They resemble eels with elongated bodies (that reach up to 40 inches long) and feed like parasites: attaching themselves to their prey with horrifying fanged mouthpieces that chew through flesh to suck out blood and fluids. If you wanted to do your best to avoid them, you would not be alone. They exist in coastal and freshwaters in most temperate regions of the earth. There is nothing likable about this creature... except maybe their taste. Romans are very fond of eating lampreys, and still today they are a prized delicacy in many parts of southern Europe. 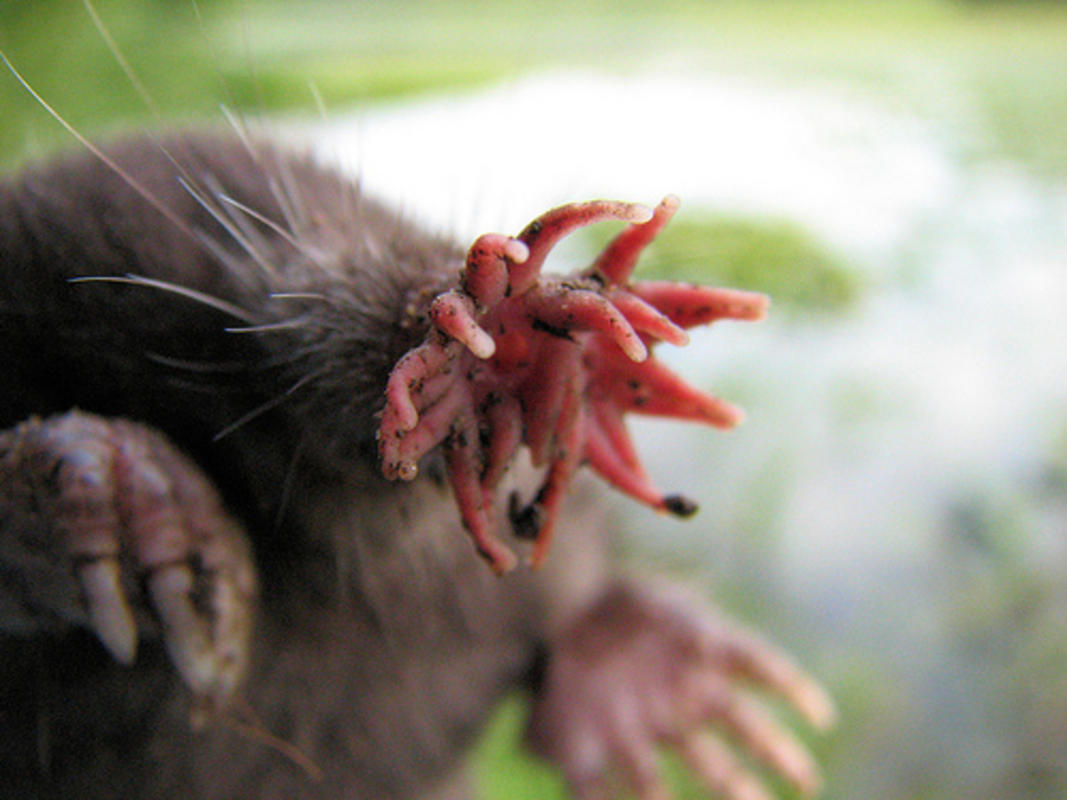 Found in the wet, low regions of eastern Canada and the northeastern US, the star-nosed mole (Condylura cristata) is easily identifiable by the twenty-two pink appendages that ring its snout. They are covered in black-brown fur and have a thick tail which is used to store fat for breeding season. But that's not their standout feature. Their strange face appendages are actually incredible organs that contain 25,000 minute sensory receptors! Their smell is so good that when they aren’t being used to identify food by touch, they can actually detect seismic wave vibrations within the Earth. They can even smell underwater by breathing bubbles and then inhaling those bubbles back in! They have 44 teeth, and were recognized by Nature magazine as the fastest-eating mammal — requiring just 120 milliseconds to detect and devour their prey. 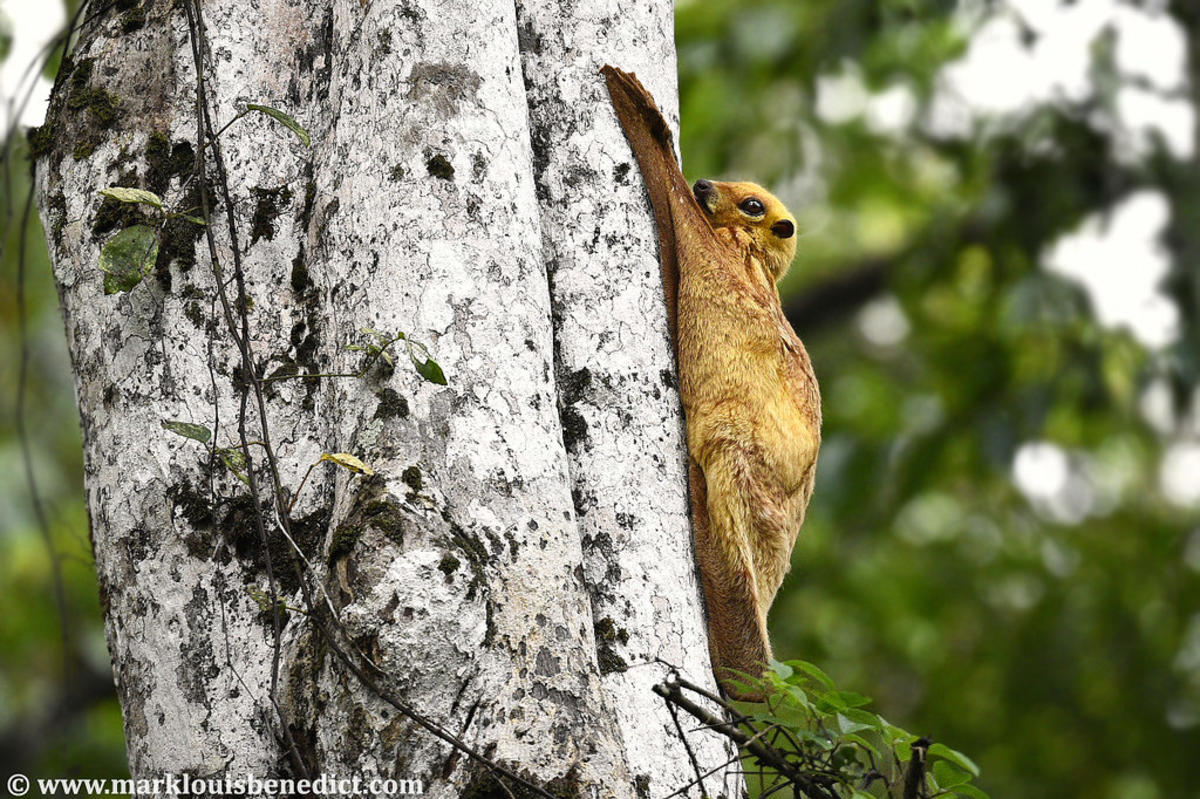 Known as the Sunda “flying lemur,” this mammal found throughout Southeast Asia is not actually a lemur and doesn’t actually fly. A species of colugo, it has the ability to leap from tree to tree using a kite-shaped membrane like a personal hang-glider. Why it may look like a superhero in the sky, the poor thing is absolutely helpless on the ground. Their leaf-based diet consists of buds, shoots, and flowers. While they have been reported on farms and in gardens, they are mostly secluded creatures and live primarily in heavily forested areas. 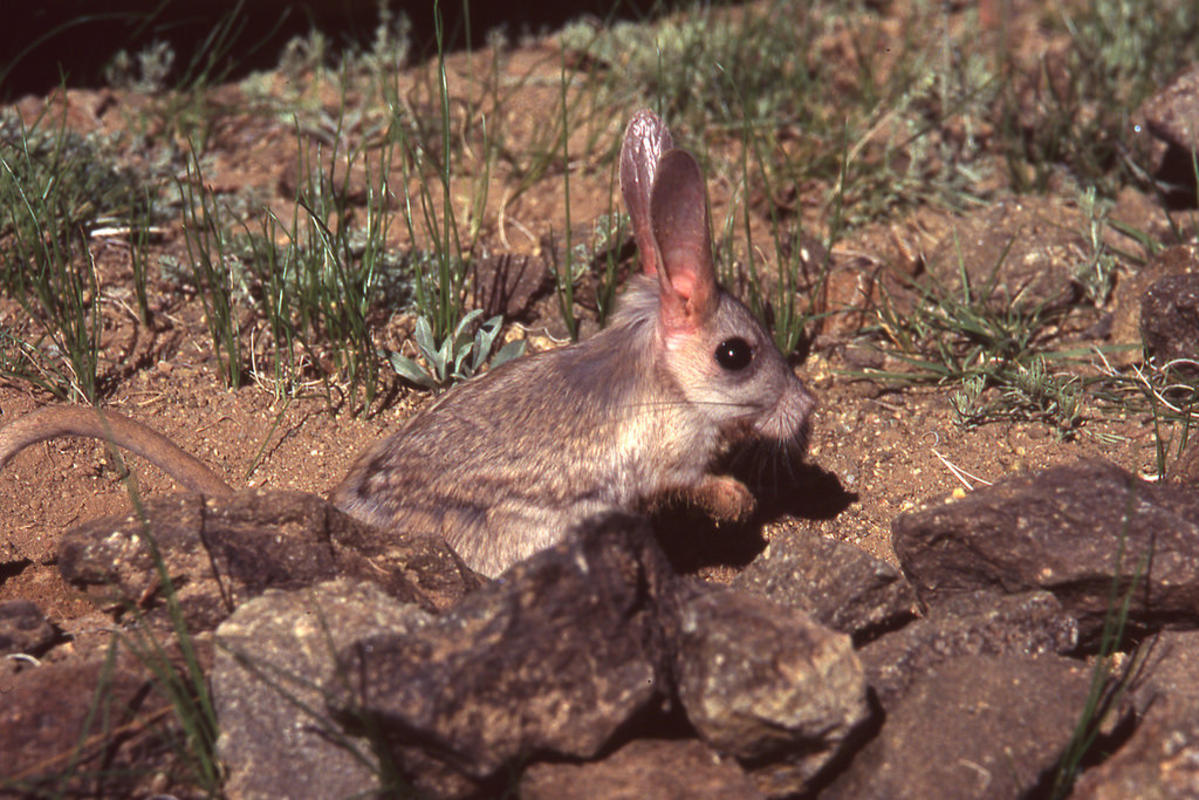 If a mouse and a hare had a lovechild you’d get the Gobi Jerboa. A native of the harsh desert climate of China and Mongolia, this resilient little guy is one of the longest living rodents on Earth with a lifespan up to 6 years. They eat seeds, roots, bugs, and larvae and (happily) are not under any threats of endangerment. The Jerboa’s fur is light and grey, it has a long tail, hare-like legs to gallop and gigantic ears that are a full three times the size of its head. Besides being great for hearing predators, the Jerboa’s ears also dissipate heat and help cool their bodies, a necessaray adaptation for the intense Gobi sun. 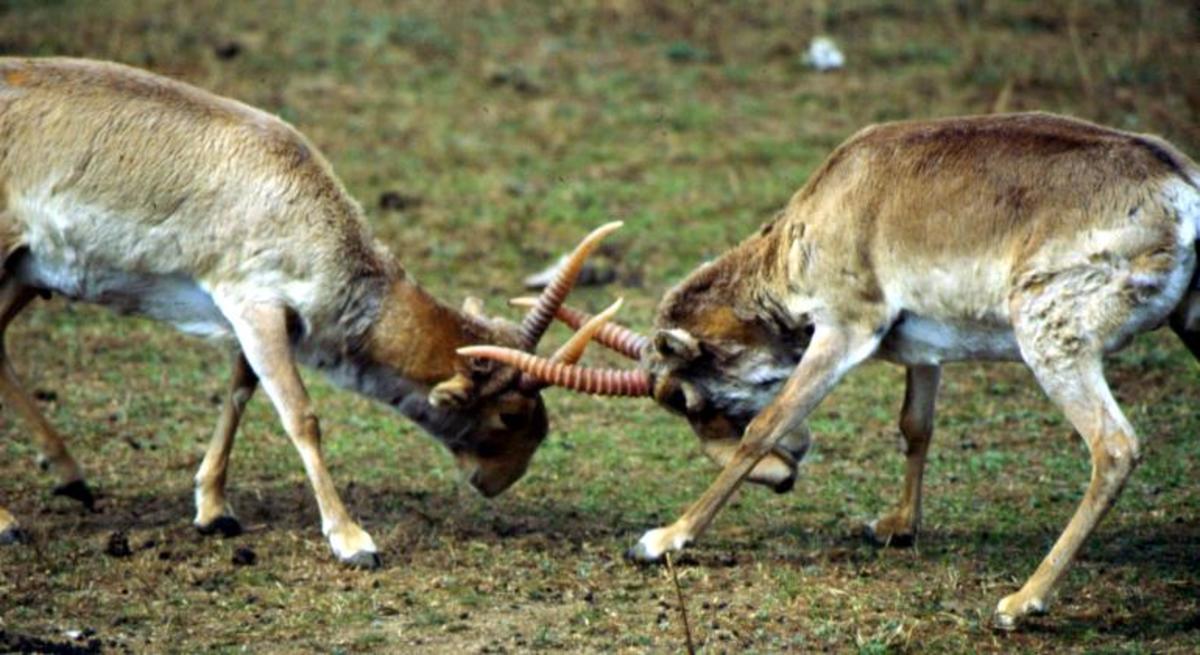 This critically endangered species can only be found in Russia, although previously they occupied all of the Eurasian steppe zone. Their fur coats change color with the seasons: red and yellow in the summertime and a cool grey color in winter. Male Saiga antelopes exhibit horns that are thick and strangely translucent. Perhaps the weirdest part of this animal, though, is its snout and nose, which make it look a lot like a muppet or character from Sesame Street. 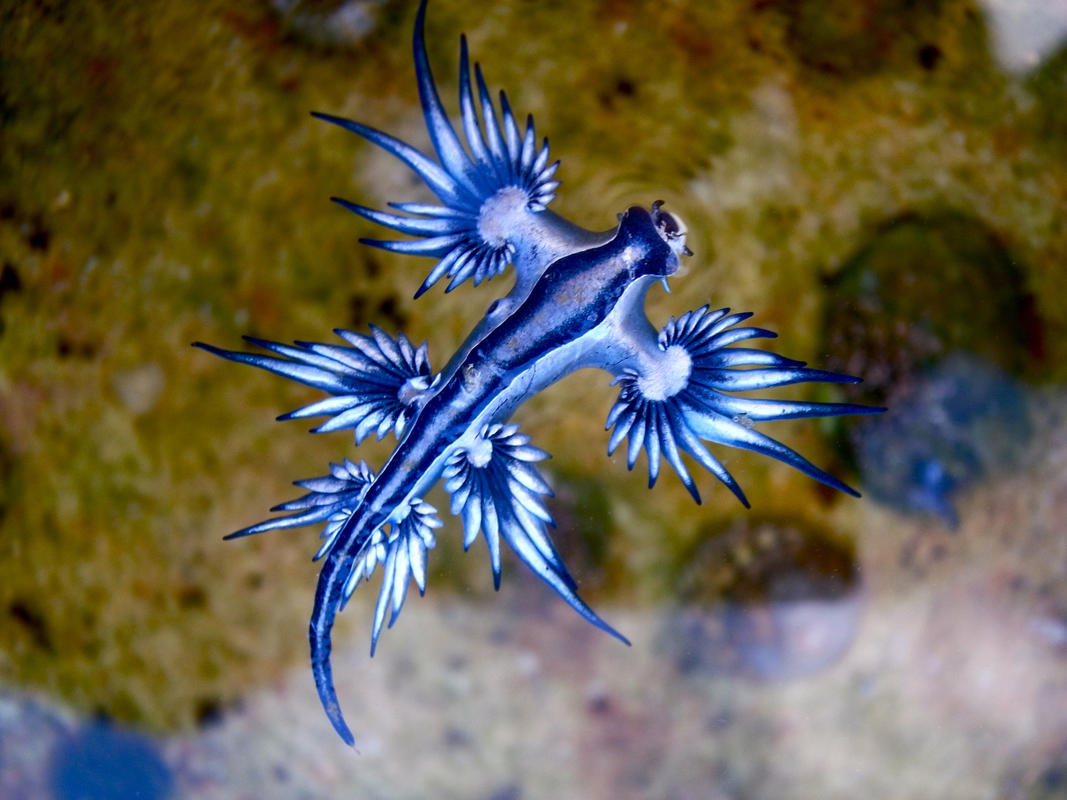 Likely the most beautiful sea-slug you’ll ever lay eyes on, using the surface tension of water, these strange beings float upside down, carelessly drifting along with ocean currents and winds. While it may look unmistakable to us, their bodies are actually well camouflaged. Its belly is bright blue, blending in with the water below, and their backs are silvery-grey, which masks against the sky seamlessly. They are armed against predators with stingers, which can administer extremely painful poison to humans who touch them. Glaucus Atlanticus feed on other pelagic creatures like the dangerously poisonous Portugese Man ’o War. They are immune to venomous nematocysts, and actually store the venom from their prey for their own later use (crafty, huh?).