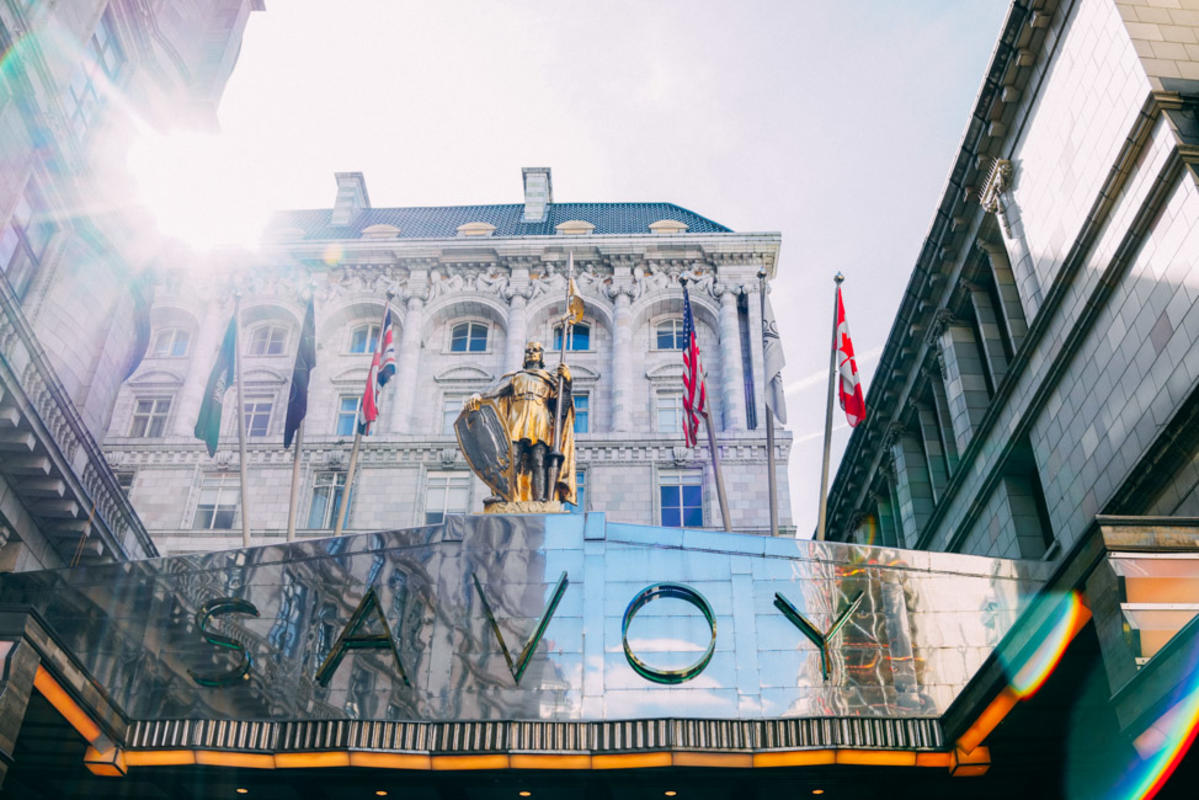 For travelers who wish to truly experience London, there's no other option than a luxurious stay at The Savoy. Iconic attractions like Big Ben and the London Eye are visible from your hotel room window, while many more others, like The National Gallery, St. Paul's Cathedral and Admiralty Arch, are within easy walking distance. At the Fairmont Hotel & Resorts, it's all about the details — and time-honored traditions. Once a palace used during the 1200s, the modern-day Savoy Hotel has been a trademark of the Northbank since 1889. Beautifully restored just in time for its 125th anniversary in 2015, The Savoy immerses guests into to a world that seems to stand still. Here, butler services, afternoon teas, and stately decor are requisites for each and every stay.

With that in mind, we sent travel photographer and London-enthusiast Kirsten Alana to The Savoy. She immersed herself into the Old World grandeur and explored every inch of London along the way. In exchange, she agreed to share her favorite #FairmontMoments plus her insider tips for exploring the city that captivates millions each year.

Hi Kirsten! Last time we spoke, you had just visited The Fairmont San Francisco. Before we discuss your stay at The Savoy, how about you tell us what you have been up to — and where you’ve traveled — since then?

Oh there’s so much to tell!! After my visit to San Francisco I completed projects in Canada’s Yukon, the Burgundy region of France and Whistler, again in Canada.

Then I took off for a huge project in Europe and Asia where I visited 10 countries in a month. Many were new to me, countries like Lithuania and Kyrgyzstan for instance, so I enjoyed being able to visit so many new places as opposed to my usual of returning to places I already love in order to dig a little deeper.

After that project wrapped up I visited Jordan for ATTA’s Adventure Next Near East and then I celebrated the start of summer in The Outer Banks before traveling to the island of Curaçao and finally over to Africa for a project in Kenya.

You’ve stayed at a few Fairmont Hotel properties before. What makes The Savoy stand out from the rest?

The Savoy is just so historic. It was really London’s first true luxury hotel, so I think that depth and breadth really make it stand out. The property has seen so much since it opened in one of the world’s most visited cities. I think what makes it really stand out for me though, is the mix of Art Deco architecture and classic elegance that on the surface don’t seem as if they will work together, and yet do. Very much so.

What were some of the nearby attractions you sought out while you stayed at The Savoy? Was it easy to navigate to and from the big-name attractions while you were there?

It was very easy! The Savoy is so centrally located since it is on The Thames and half way between St. Paul’s Cathedral and Westminster. We bought passes for The Tube and didn’t end up using them very much, we walked pretty much everywhere we desired to go; from The National Gallery to Covent Garden and across the river to South Bank and the Eye. Danté even walked all the way to St. Paul’s early one morning while I slept in a bit.

How would you describe your photography style, especially when you’re exploring cities like London?

After two decades of being a photographer, I still don’t feel I really have a style!! However, if I do it tends to adapt itself to the places I visit. So in London I like to concentrate on the history of the city by capturing facades and details that communicate that.

As a photographer, what were a few of your favorite #FairmontMoments to capture inside the Savoy?

I had so much fun photographing the cocktails at Beaufort Bar and The American Bar. Things that sparkle and provide great depth of field are so entertaining to create imagery around. I could have sat at those bars sipping drinks and making photographs all day long!

As you just mentioned, The Savoy is home to the award-winning Beaufort Bar. What cocktails did you sample?

At Beaufort Bar, I adored ‘The Showgirl’ because it was an homage to Marilyn Monroe. Perhaps because I am an American woman, she is still the epitome of sex appeal for me. Indeed the drink lived up to her reputation and I can’t help thinking she’d be proud. It’s served in front of a light-up mirror that is oh-so-Hollywood. For men, I’d recommend ‘Under the Stars’ which is made with Bourbon and pays homage to Fred Astaire who once danced on the roof of The Savoy with his sister.

At The American Bar, which won the number two spot in 2016 on the Worlds 50 Best Bars list, I’d recommend having enough room to try multiple cocktails. Bartender Dominic guided me through the menu which includes drinks representing each distinct part of England and Scotland. If I hadn’t been able to try at least the three cocktails that I did, I think it would have been an incomplete experience.

What are your must-do, must-eat, must-see recommendations to our readers who want to visit The Savoy?

I can’t visit London without a stop in at The National Gallery and it’s so convenient to The Savoy, just a quick walk down the Strand to Trafalgar Square. Likewise, another favorite of mine is Uber conveniently located to The Savoy and that’s Covent Garden. I love heading over there for some macarons from Laduree while listening to, or watching, whatever buskers are currently performing.

Speaking of macarons though, there is a shop inside The Savoy that sells the most scrumptious chocolates made on site and macarons that are quite delicious. Perfect afternoon treat. And while it’s already been mentioned, I can’t recommend The American Bar highly enough. Before you visit, or just after, a stop at the Savoy Museum will allow you to learn more about the hotel’s illustrious history and the many famous visitors who have called it their own “home away from home.”