The Truth About Glitch Fares: How to Know if That Super Cheap Airfare is Really a Deal

In recent years we’ve seen a surge in what people call “glitch” fares. You know, that rumored $50 flight to Europe or ridiculously low fare to Hawaii that's just too good to be true. It’s believed that these miss-priced fares are mistakes made by the airlines or a third party booking website. Unfortunately, that's not always true. While mistakes do happen on occasion, it’s not nearly as often as you'd like to believe. Nor are these fares without risk. Here's when to take advantage of a glitch fare and what you need to know to protect yourself. 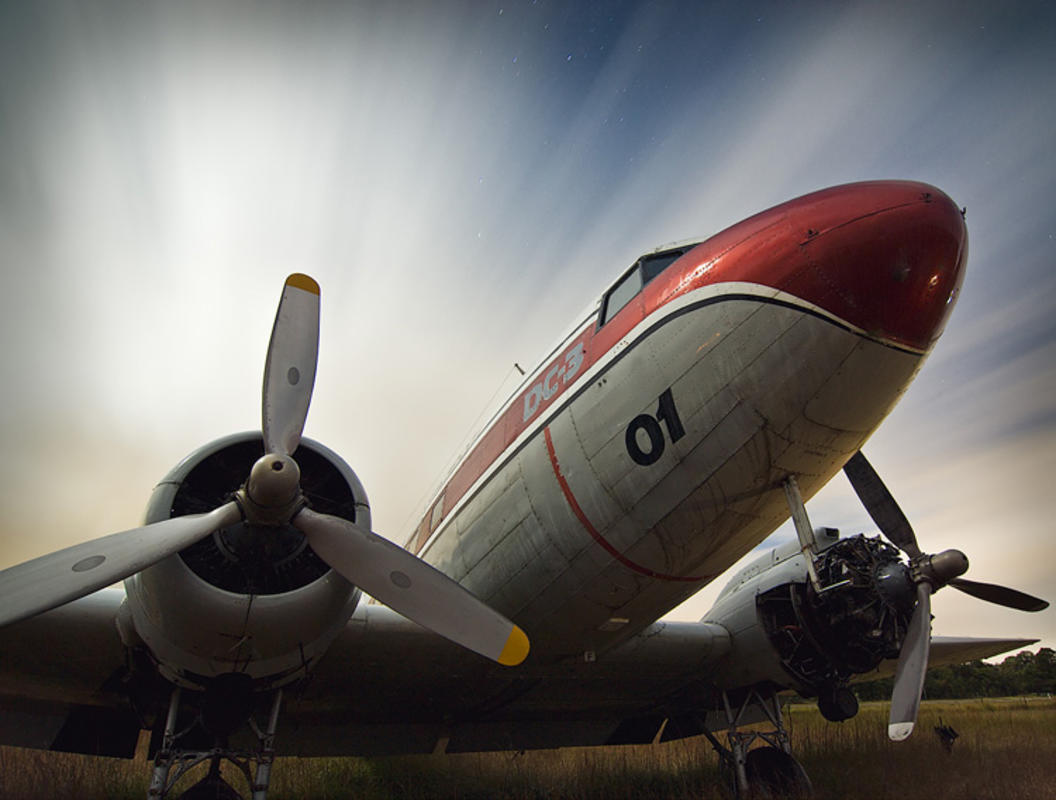 “Glitch Fare” has become a buzz word to encompass any type of highly discounted airfare. In fact, it's used so often that consumers may even believe they can’t get a great deal without a mistake. Glitch fares can occur because of human error. The most common instance is that airport taxes, fuel surcharges or other fees aren’t added to the base fare. But the majority of the time, most of these glitch fares aren’t actually glitches at all. Let’s put aside the idea that a multi-billion dollar industry would somehow use faulty computer pricing systems. The truth is, many of these deeply discounted fares were created on purpose. Deeply discounted fares are occasionally used to promote a struggling flight route, or introduce a new one. If you aren’t able to capture a glitch fare, don’t worry. You still have plenty of opportunities to grabbed deeply discounted airfare if you know where to look.

TIP: Join a Facebook group or forum dedicated to glitch and discounted fares. SecretFlying (Facebook) and flyertalk.com are two of the best for current discussions. The key is constant research and plugging into a network. 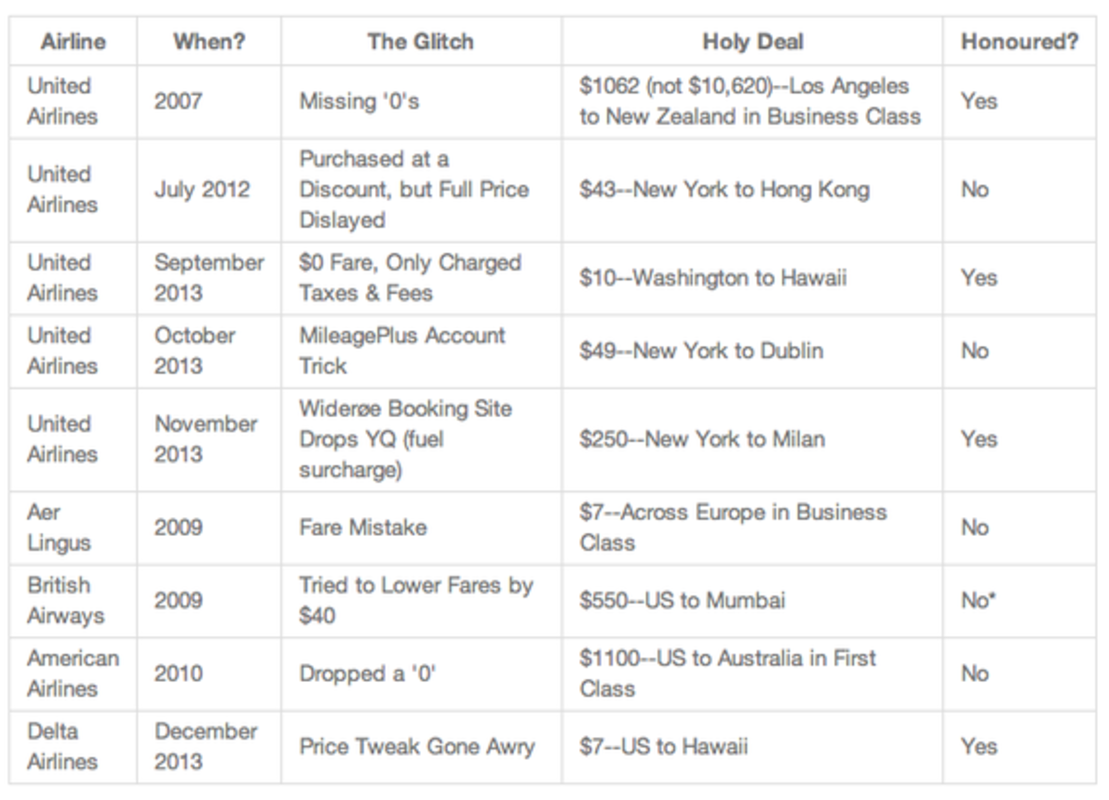 Understand the Fare May Not Be Honored

The reality of true glitch fares (mistakes) is that the airline may not honor them. The legality of canceling these fares has been debated both publicly and in court for years, but no real decision has ever been reached. Various reasons are cited by the airlines as the source of these “glitches,” each essentially absolving themselves of responsibility, but you need to understand that you may not get that amazing deal -- it's a gamble.

TIP: Don’t book any accommodations or tours without a fully confirmed ticket. The airline will usually message you within a day or two regarding your reservations status. If a ticket has been issued, then you are free to book the rest of your trip. 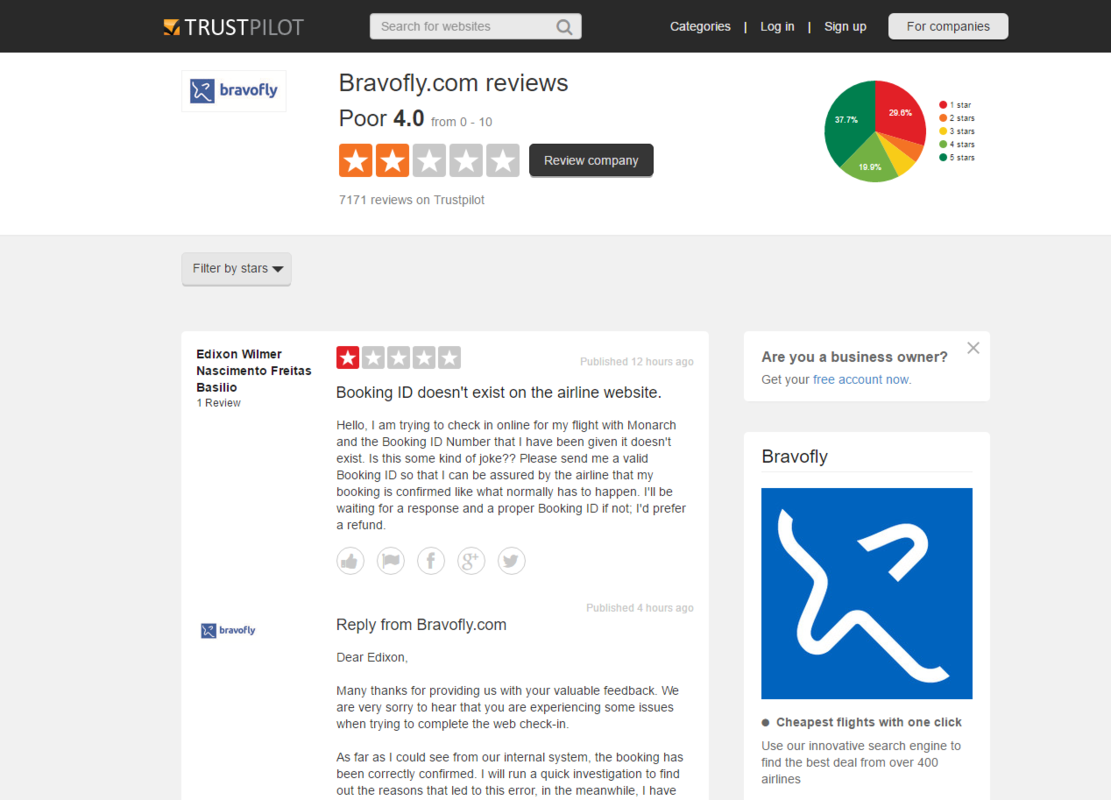 One of the biggest dangers facing travelers searching for glitch fares are the deals found on third party sites like Expedia or Priceline. Since these sites aren't managed by the airline, they don't always offer the same security and consumer protection of a purchase. Some of these sites even charge you a higher tiered fare while booking you on a lower priced ticket that may exclude baggage, meals, or seat selection. That's not a fun surprise to discover at the airport when add-ons are significantly more expensive.

TIP: Whenever possible, book directly through the airline. Not only will you have a higher chance of the fare being honored, you’ll also know exactly what is and isn’t included in the price. 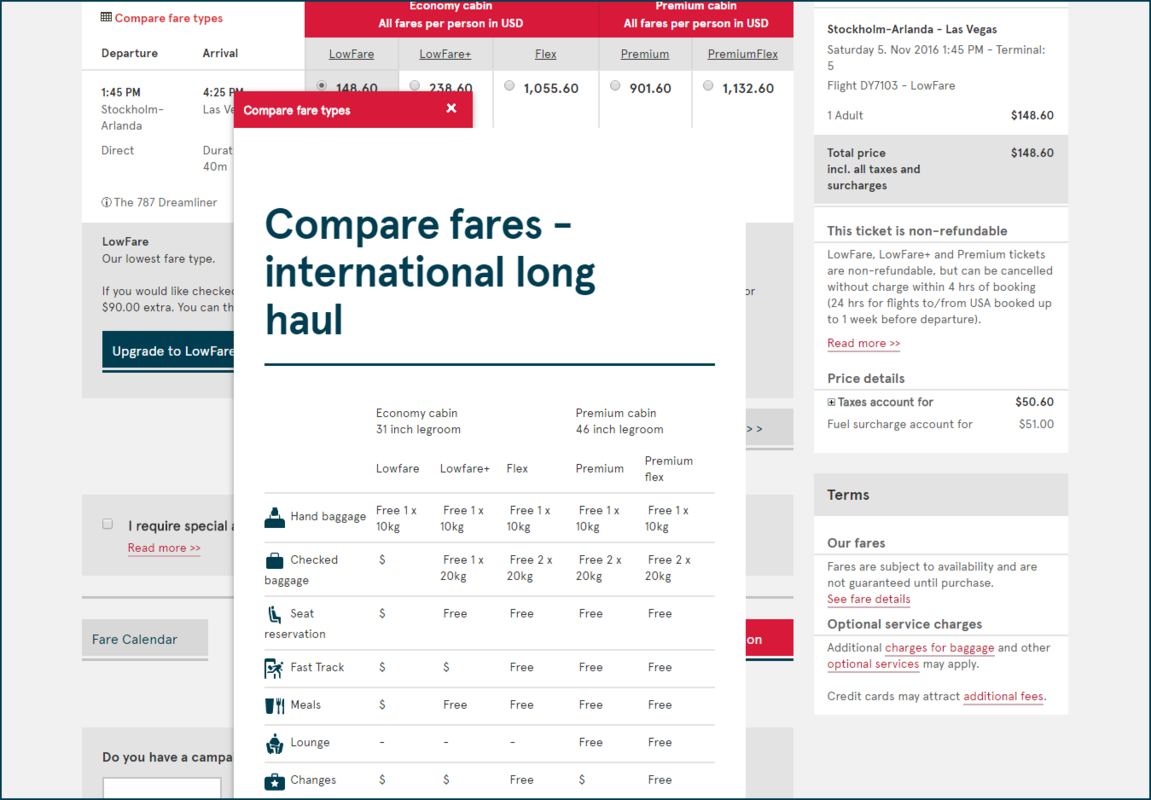 Understand What the Fare Includes

In May 2008, American Airlines became the first major airline to charge for checked baggage. Eight years later, it's become almost the norm, along with extra fees for meals, seat selection, and other “perks” that were once considered standard. One way Spirit and Frontier flights are so cheap is that they're "bare bones" fares, meaning everything is an add-on. Make sure you understand the whole picture of what you're paying for because those items can add up quickly.

TIP: Always check both the roundtrip and one way fares for your destination and know what la carte services the airline offers. For example, Norwegian offers a package over their base fare which only includes a carry-on bag. This “upgrade” includes two meals, a checked bag up to 15 kg, and seat selection for $90. If you were to pay for your luggage, seat selection and meals individually, they'd cost $45 each. As you can see, it's cheaper to buy the package at booking. 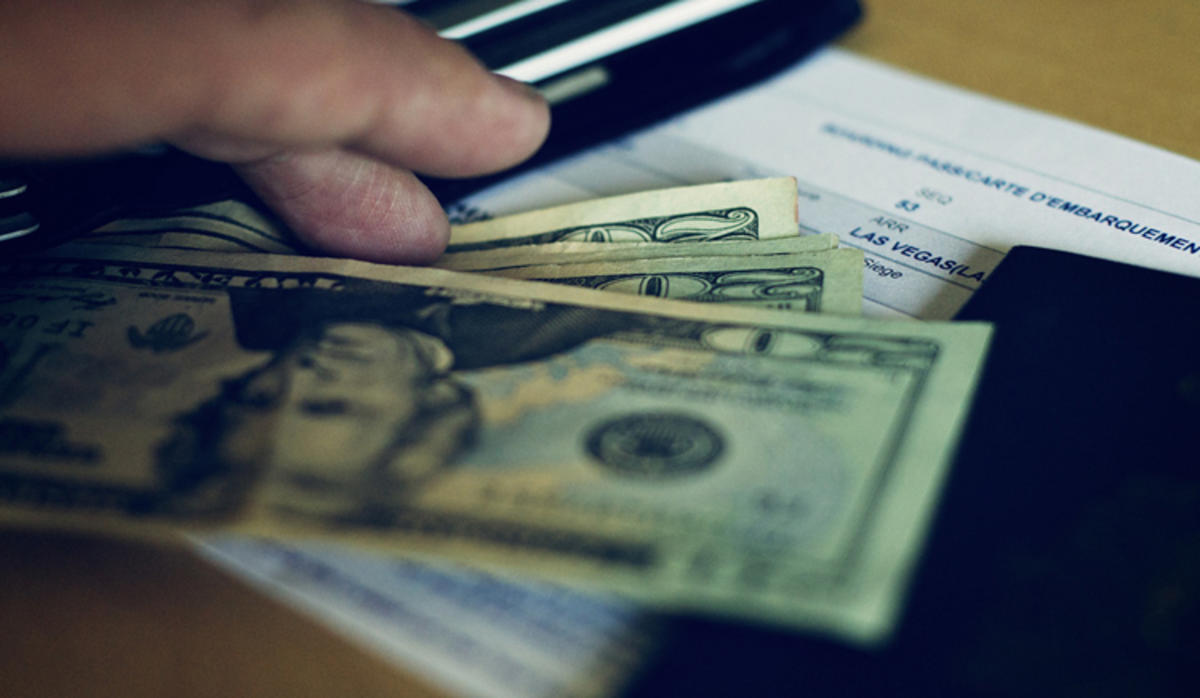 Consider If the Destination is Really a Deal

Not all cities were created equal. Paris and Budapest are miles apart in terms of flight cost, but you have to remember the price of your trip doesn't end after you book a flight. Accommodations, meals, and tours add up quickly and vary greatly by country. If you think you're saving a bundle by getting to Europe flying into some rinky-dink airport and then taking the train or ground transportation to your real destination, make sure you calculate the real cost of travel between places. Often times, it's simply not worth the extra time, money or effort.

Another thing many don't consider is visas and reciprocity fees. If you’re an American, visa fees aren’t as much of an issue, but some can definitely sneak up on you. Recently, destinations like Argentina and Chile have lifted the reciprocity fee of $160 for U.S. citizens. However, this fee is still in place when traveling to Brazil. China charges U.S. citizens $140 for a visa. Keep in mind that visas, even inexpensive ones, take time to obtain and may not be approved. If you're not approved, you don’t get your money back.

TIP: Always estimate the full cost of traveling to a destination before determining if it's a good deal. Apply for any necessary visas before buying a plane ticket. You may also want to check the country's laws regarding criminal records, as well. Canada is notorious for not allowing anyone with a criminal records to visit. 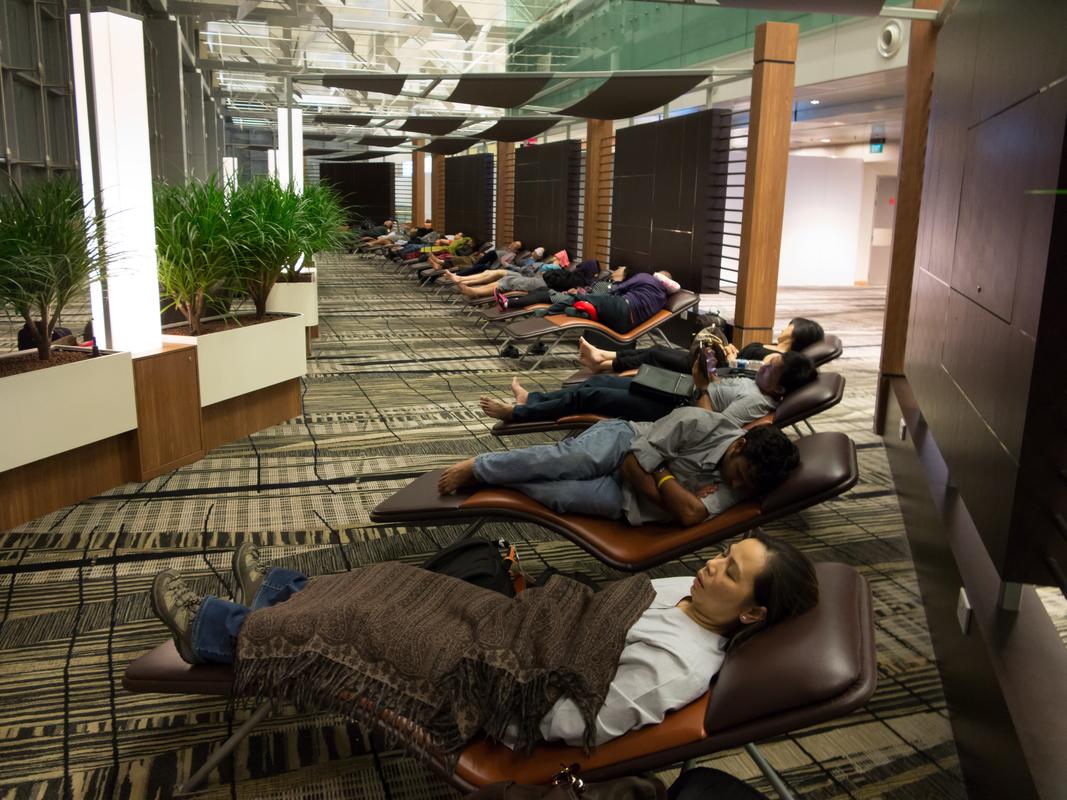 Long Layovers Can Get Ugly

A common result of glitch fares or deeply discounted flights is a long layover, sometimes over 12 hours. It may even be in a country that doesn’t allow you to leave the airport. Depending on the airline, long layovers may also increase the chance of your baggage getting lost because you’re switching planes, airports, or terminals. One of the worse travel experiences is sitting for hours at an airport with limited sleeping, food, and wifi options.

TIP: Make sure to research the airport beforehand. http://www.sleepinginairports.net/ is a great resource for knowing what hubs offer what amenities.

Champagne Taste on a Beer Budget? Ruidoso is the Destination for You