Chasing the Bare-Bottomed Zebra and Other Once Extinct Animals

By Marla Sink Druzgal
Save 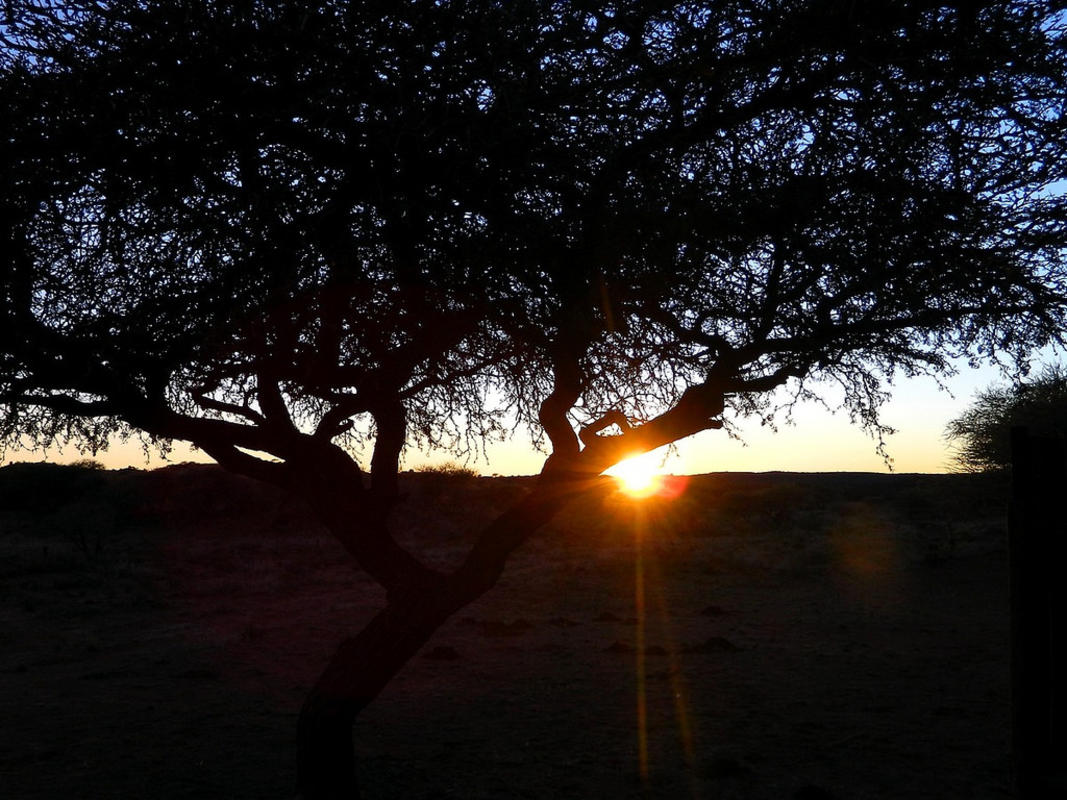 Once upon a time lived a zebra with no stripes on its hind quarters, known as the Quagga. It was hunted to extinction by the early 1900s. But in Mokala National Park, scientists specializing in the DNA of endangered wildlife are bringing them back. I packed my tent and went in search of these mythical creatures.

This was May; the start of winter in South Africa. Six peaceful hours of driving through open farmland and small towns, I was in such a relaxed state that I almost missed the turn-off. I was leaving civilization to spend a week in what's known as the Kalahari bush veld, with roads made of dirt, sand, and rock (some only accessible with a 4x4).

Mokala National Park has plenty of accommodation in lodges and bungalows, but only one place to camp: Motswedi. Here they boast a new luxury to camping in South Africa’s national parks: private ablution blocks (wash basins) and kitchens. For under $20 for two people, you can choose from one of six spacious sites, situated in a semi-circle around a watering hole, each with its own bathroom and kitchenette powered by solar and gas. If you want a wilder experience in the park, you can opt to spend a night in an open air treehouse, or in a bird hide. Either would leave you completely alone with nature. 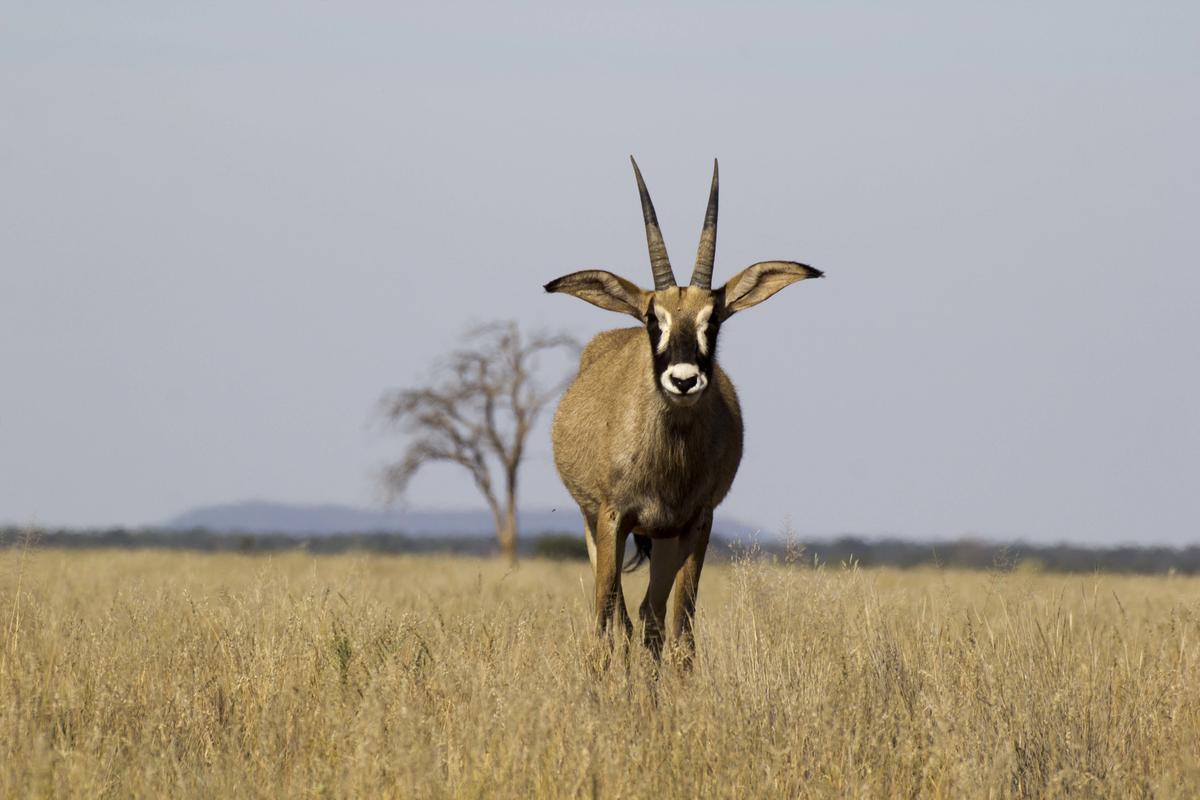 Right off the bat, I didn’t see zebra, but found some red hartebeest, and a rare black springbok (product of a recessive gene). Each morning I woke before dawn to watch the sunrise, and sat quietly as a bachelor group of endangered tsessebe antelope had their morning rolls in the watering hole.

Rarity is the name of the game at Mokala. They have no apex predators, allowing the protected species to flourish and create a breeding population which can be used to repopulate other parks. Small, black-backed jackals are the top dog, and I fell asleep each night listening to them brag of their status as they cry back and forth among the roaming packs.

I’ve been lucky to have tracked both white and black rhino on foot in Kruger National Park, so as much as I was excited to come across three rhinoceros on my second day, they weren’t my objective for this trip. I was here for the resurrected zebra.

After covering much of the southern section and finding some zebras that appeared to have normal striping, I decided to head north, toward the open plains area. I found a breeding herd of roan antelope, an awkwardly pretty species with ears like donkeys and horns similar to their more elegant cousins—the sable. Roan are listed as a vulnerable species. I watched as a young buck tilted his head at me, his too-large ears flopping to the side, before he went running after his mother. 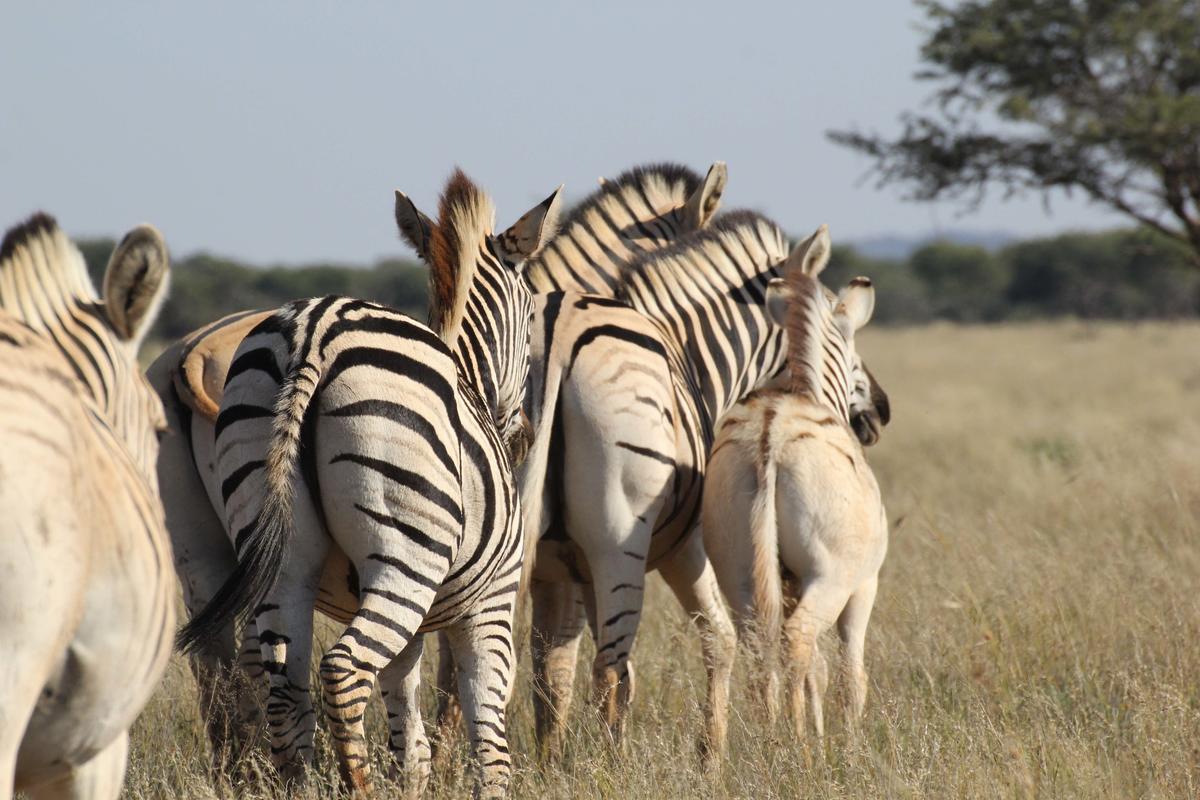 That’s when I heard the familiar, high-pitched calls: quagga! quagga! quagga! quagga! I turned to see an approaching group of zebra. The name came about from the Khoi people, some of the earliest inhabitants of southern Africa, who thought it best described the sound made by all zebra. Thus, the word “quagga” is part of their scientific classification. (It is pronounced “kwa-gha” with the “-gha” sound being made on the edge of the throat.) But only one zebra kept the common name quagga—the special “subspecies” with the stripeless hindquarters so popular for its uniqueness that it was hunted out at the beginning of the 20th century.

As DNA became more mainstream in wildlife research projects, animals considered extinct could still be tested by way of skin and tissue stored in museums and private trophy collections. In the case of the quagga, tests revealed that it was never actually a separate species, but simply a variety of plains zebra with a color variant gene. Researchers of endangered wildlife, along with South African National Parks, selected plains zebras from Namibia which had the lightest coloring on the rump to begin breeding the Quagga back to life. 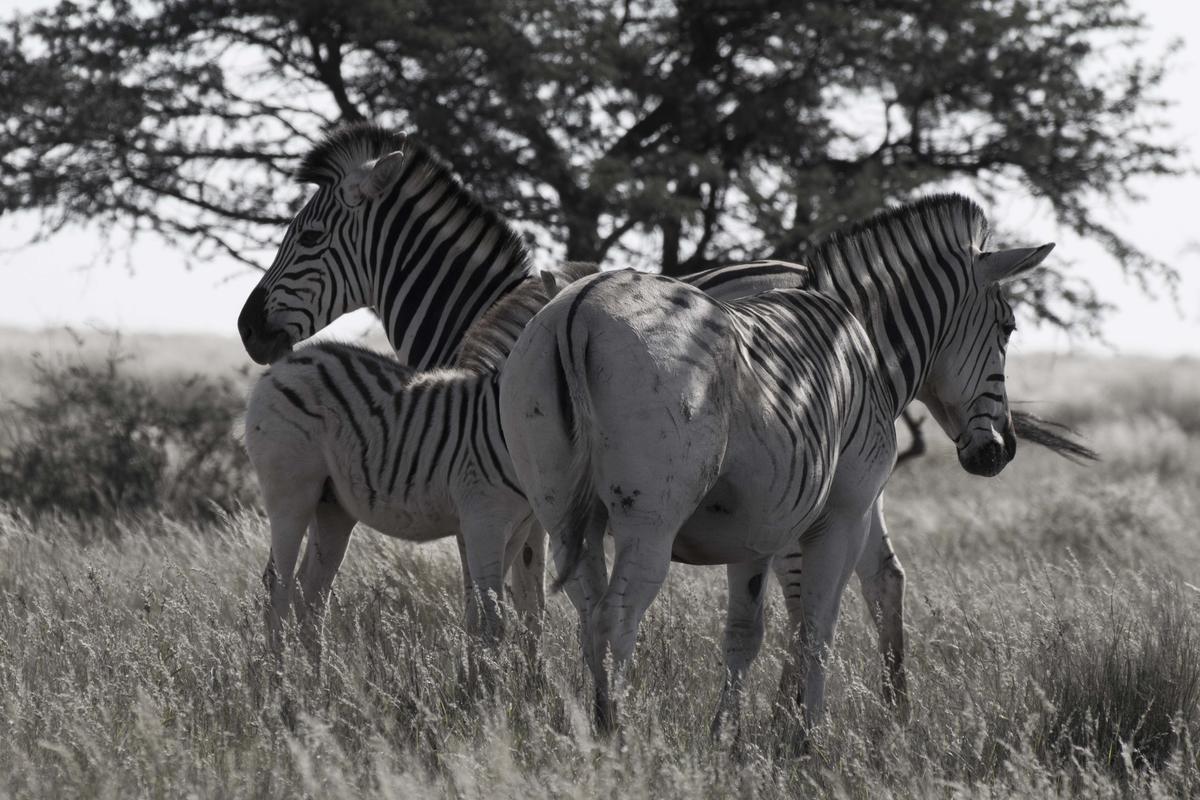 In my car I waited quietly as the zebra trotted toward me. The closer they came, the more I could see a few faded rumps in the herd. My patience paid off as one by one they crossed the road. I watched them graze, silently willing them to turn around. The irony of safari photography is that usually when you want to take pictures of their faces, the animals are all walking away from you. Today they seemed to all graze facing me, as if my camera prompted sudden equine modesty. I tried remembering some childhood joke about an embarrassed zebra.

When they did finally turn, I realized just how much time and difficulty is involved in selective breeding. Within just this small family, the gene for the bare bottom seemed to only express itself part of the time, and instead of adding the light brown color the original quagga was known for, the breeding so far was successful only in removing the stripes. But that was excitement enough when I saw a foal with nearly bare haunches. As quickly as they stopped for the tall grass near my car, they moved on again, so quickly I almost forgot to pick up my camera. 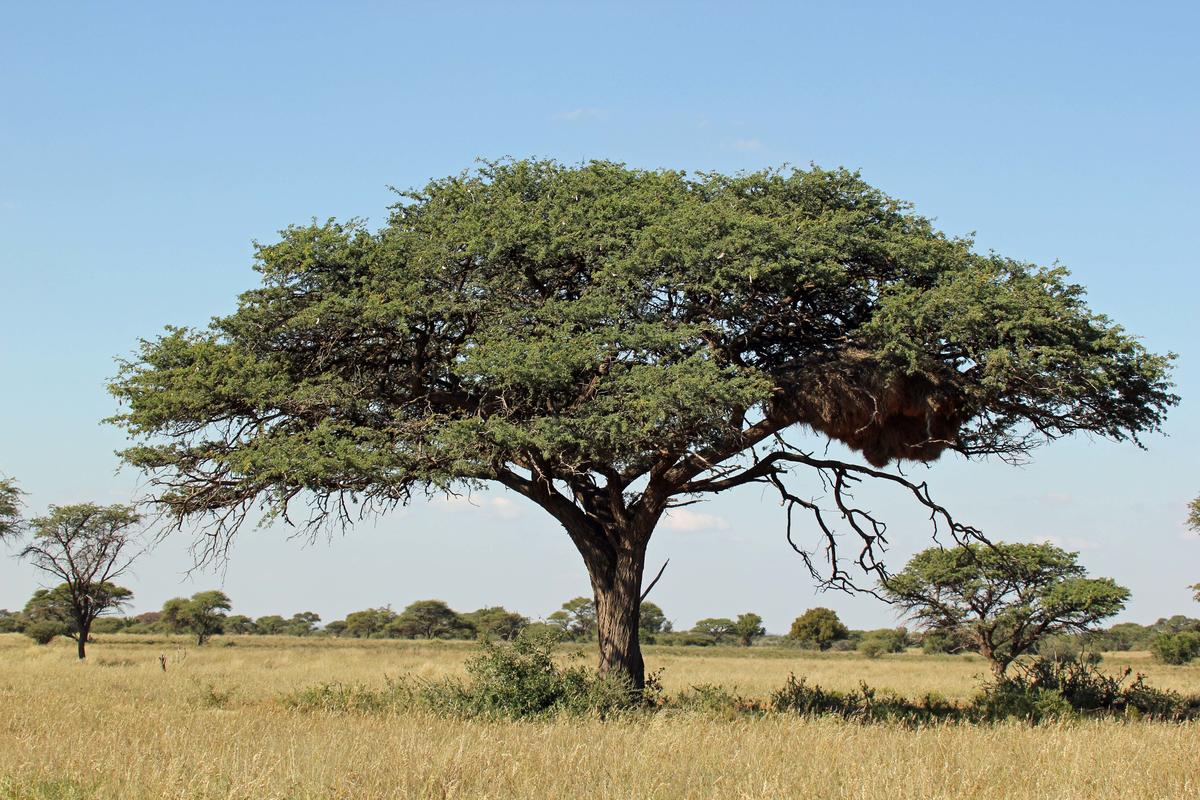 I didn’t expect to have success finding the quaggas so soon in the week, so it was time for a new challenge: the pygmy falcon. I headed back toward a large tree I had spotted on my morning drive. It had a large sociable weaver nest in it, and I read in my guidebook that pygmy falcons live in the same complex nest as sociable weavers. I pulled over within sight of the tree and popped on the zoom lens I use for birding. I thought I was pretty clever to set up the stake out, but after watching for hours, no luck. 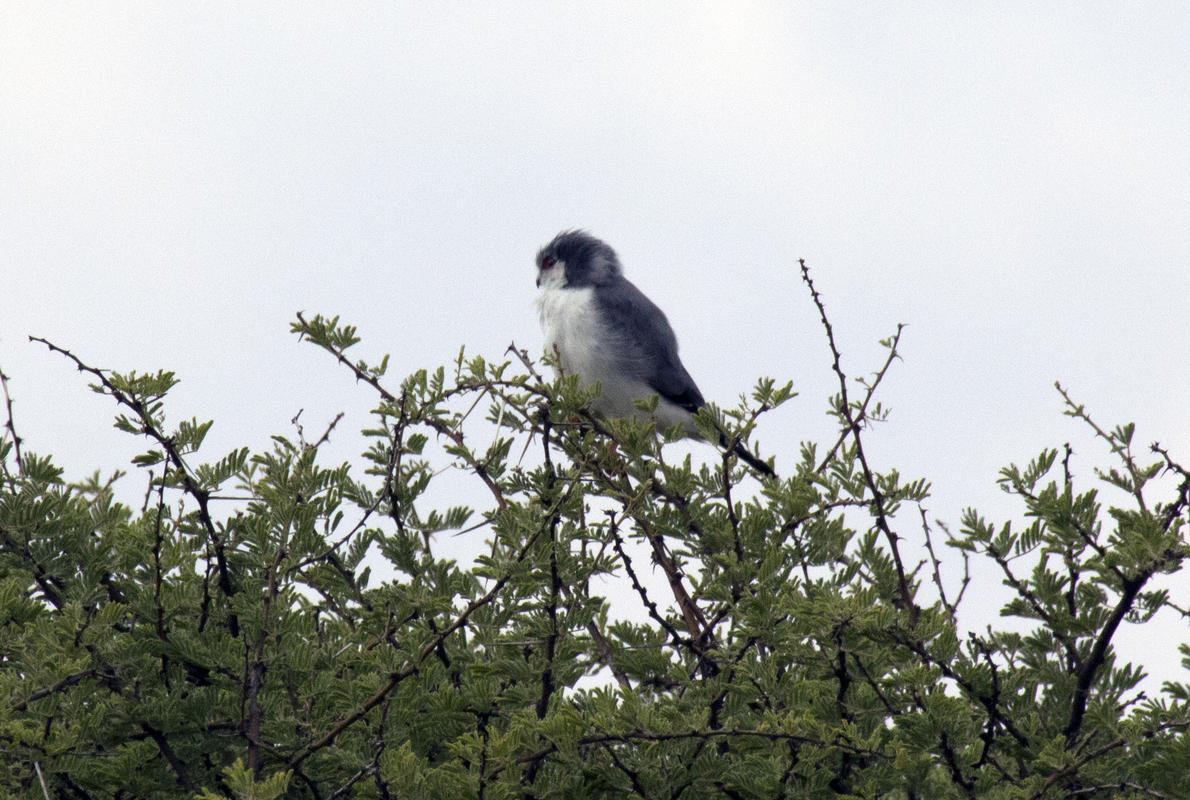 I started chasing some smaller red-headed finches flitting among the thorn trees and found myself snapping photos of a small bird perched nearby. As I looked through the lens to focus, I realized I had stumbled across the very bird I was looking for. It stared down the camera lens, and took flight almost immediately. I shifted into reverse and backed up the bumpy dirt road, trying to see where it would land. As soon as I got close, it would take flight.

We played this cat and mouse game for awhile, until it decided it was far enough away to allow me to take photos from afar. It was hard to believe that the bird I was watching was even a raptor. It had all the bearing of its larger cousins (keen-eyed stare; hooked beak for ripping into its prey; tall, proud perch) but size alone made it seem more toy than terror. It didn’t pose long before it was off again, this time too far inland to follow. 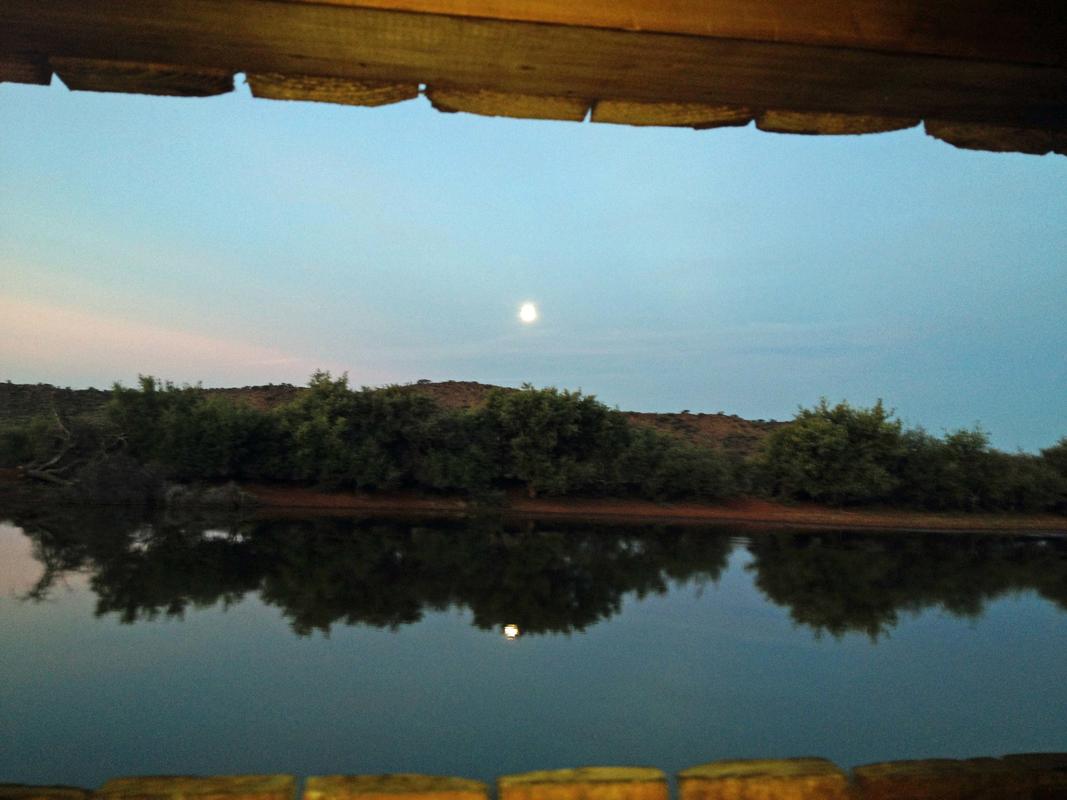 As nighttime set in, the temperature was dropping with the sun, and I lit a fire in the hide’s braai area, reserved for overnight visitors. Splashing startled me awake sometime after midnight, and I could hear Egyptian geese honking loudly. I listened to the odd sonar-ping sound of a scops owl, and some crying jackals in the distance. I stood, staring off into space at the southern hemisphere's constellations. The Milky Way was so bright that even with the light from the moon, I knew I had never experienced such complete darkness before.

It was time to leave the park and head back to the crowded asphalt of Johannesburg and Pretoria. But I already found what I was looking for: a partially resurrected zebra, an elusive pygmy falcon, and the rarest thing of all: peace and quiet.

Marla is a freelance writer and global explorer. She creates travel adventures for herself following in the footsteps of her favorite authors. An American expat, she currently lives in South Africa.

http://www.travelingmarla.com
Join 100k like-minded travelers by subscribing to iExplore
Join with Email
RECOMMENDED FOR YOU