You know that saying, "everything old is new again?" Arcades aren't just for nerds in the 80s anymore. A revamped, adult version of arcades have become some of the most hip and popular evening hangouts in cities across the U.S. Bar arcades are local bars that serve up your favorite booze with tons of vintage arcade games to pass the time. If you like getting buzzed and playing Donkey Kong, round up the posse, get some quarters and head to one of these amazing spots. 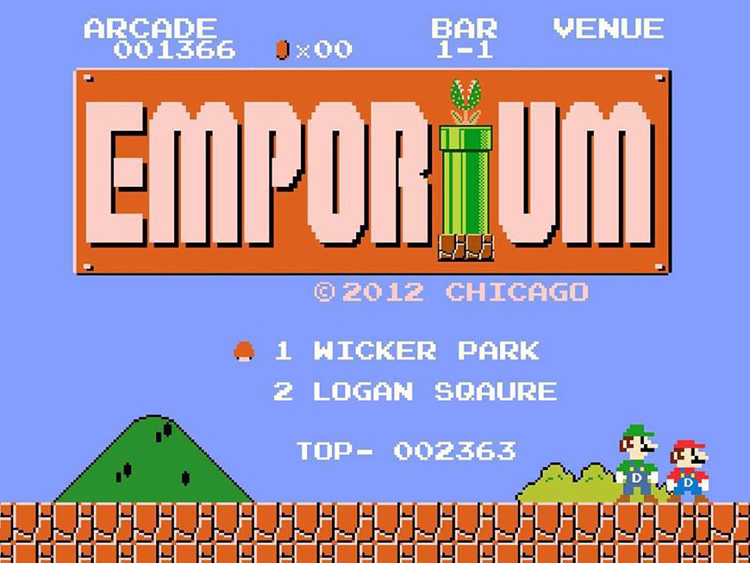 In the Windy City and in the mood for beer and pinball? Head to Emporium Arcade Bar. With locations in trendy Wicker Park and Logan Square, both venues are huge and feature a wide variety of old school arcade games, from foosball to table hockey, and two-player fighting games. They also frequently feature food truck vendors and serve up local and imported beers, along with classic cocktails. 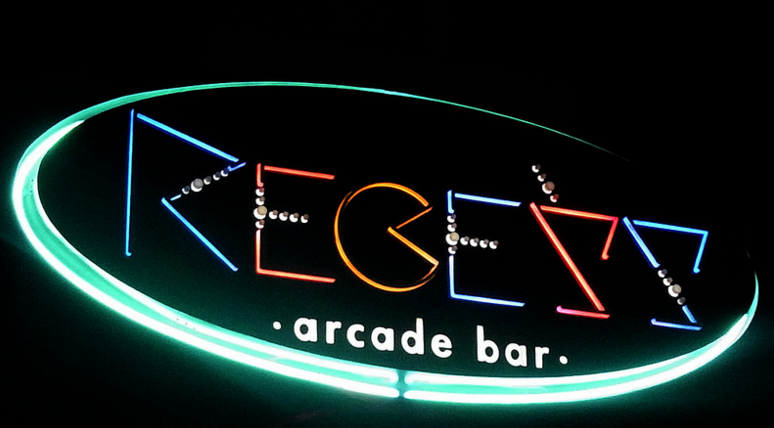 It’s no surprise that the hip city of Austin would also have an incredibly cool bar arcade. Recess is also great for sports fans as they show a number of games on TV, but if you'd rather play than watch, hook yourself up with a game of Mortal Kombat, NFL Blitz, or Ms. Pacman. They offer drink specials Tuesday through Sunday, so you don't have to drain your wallet in the process. 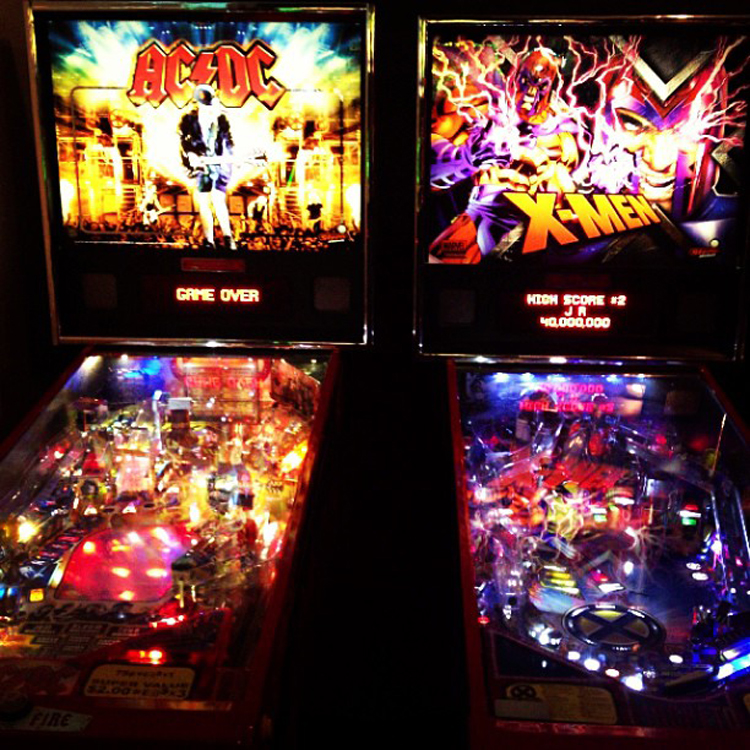 For anyone in NYC into vintage games, make Two Bit’s Retro Arcade your local watering hole. Not only are they chock full of classic arcade games, but they throw a heck of a party for the Super Bowl, Valentine’s Day, New Year’s Eve, and any other occasion they can think of. Whether it's a celebration or not, you can just camp out at Empire Strikes Back and sip beers all night, too. 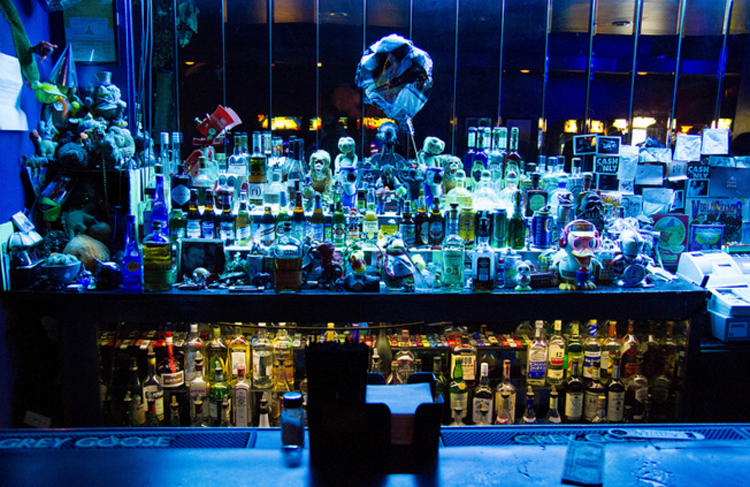 A self-proclaimed dive in LA, Blipsy Bar Arcade features and old school jukebox, a DJ every Tuesday, and an all-day Vicente Fernandez listening party once a year. Clearly they have great taste in music, but of course, the bar is also all about the games and drinks as cheap as five bucks. You can’t go wrong. 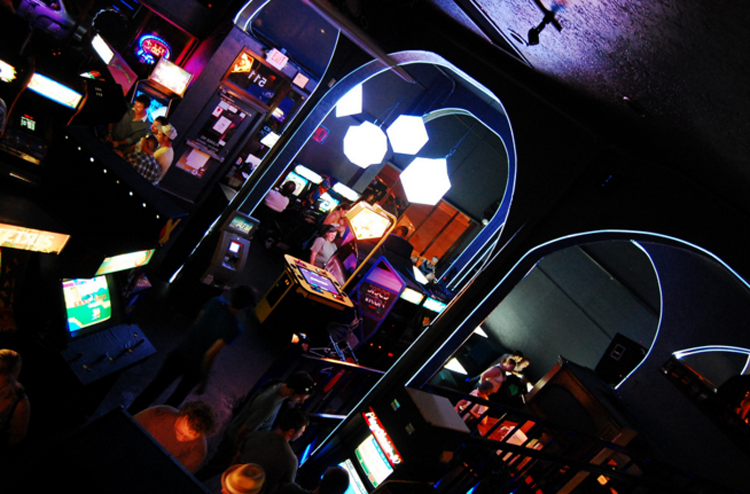 Come for the food, stay for the 90+ games. Portland’s Ground Kontrol is a classic arcade with favorites from the past forty years. That means everything from Stargate and Dance Dance Revolution Extreme (harder if you’re tipsy!) to Mario Kart and Donkey Kong. Their menu features snacks named after popular arcade games, including the “D.K. Dessert Dog," a sweet-and-savory combo of banana, bacon, peanut butter, and honey. Wash it down with a local brew before hitting the joystick. 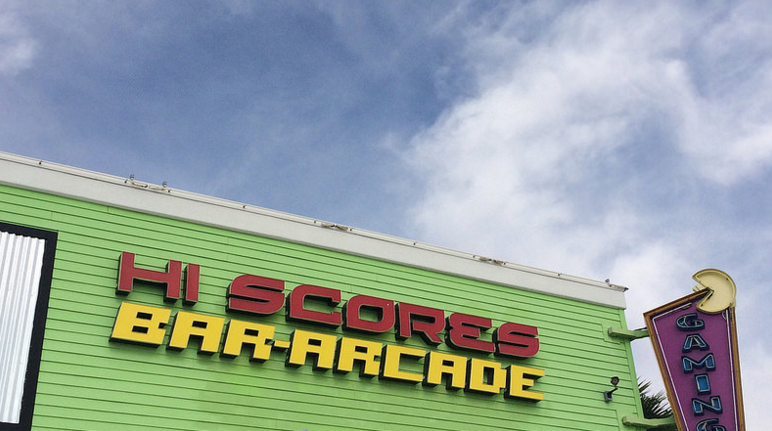 Hi Scores Bar-Arcade in Vegas may be your best chance of scoring big in Sin City as all their arcade games are completely free. Located just outside the Strip in Henderson, their huge selection of craft and local beers makes it perfect for a bit of day-drinking between the rowdy night clubs and glitz and glam of the casinos. And since it’s Vegas, of course there's video poker, perfect if you've dropped all your coin on the real tables.