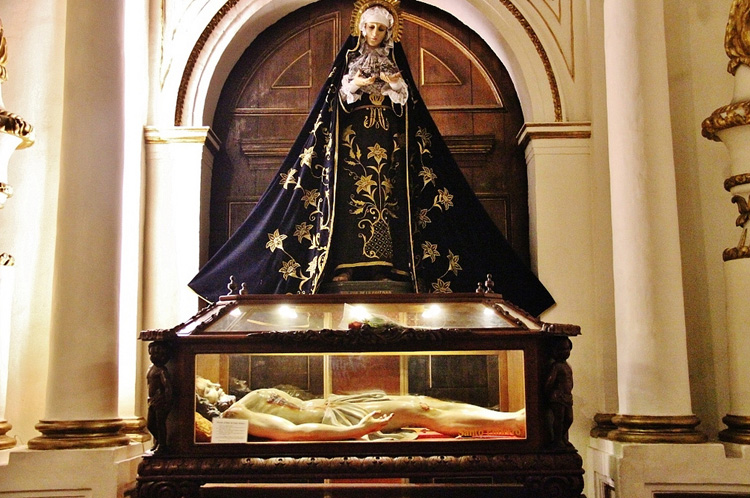 Dia de la Virgen de Guadalupe is a religious feast day celebrated annually in on December 12. This national holiday, which honors Our Lady of Guadalupe, a Catholic Saint, is a very important day for faithful Mexican citizens. Each year, thousands of religious pilgrims from all over the country travel to the Basilica of Guadalupe, a large church located in Mexico City, to lay their eyes on La Virgen Morena. This icon of the Virgin Mary is considered extremely holy by Mexican Catholics, who believe that she can perform miracles and answer the prayers of the faithful.

For a long time, Mexicans worshipped the Virgin of Guadalupe as the queen of Mexico, displaying her picture on flags during the Mexican Wars of Independence and the Mexican Revolution. The story of the virgin has become an important part of the country’s history and lore, as well as a vital cornerstone of the citizens’ Catholic faith. As tradition has it, Juan Diego, a Native American living at the time of the Spanish conquest of Mexico, was visited by an apparition of the Virgin Mary on December 9, 1531. In his vision, he was told to build a giant church exactly where he stood. Today, this is where the Basilica of Guadalupe is located.

Despite being an important religious feast day, the Dia de la Virgen Guadalupe is also a festive and joyful holiday. While most people will spend at least a few hours in church, they will also set off fire crackers, march in parades and attend live musical performances. By the time morning mass has ended, the parties are already beginning, some of which even include bullfights. This merrymaking is considered to be a sign of respect and thanks to the Virgin of Guadalupe, who observers of the holiday believe protected them all year.

In addition to the fantastic celebrations, food is also a very important part of Mexico’s Dia de la Virgen Guadalupe. In particular, bunuelos are commonly eaten during this feast day, sold by the dozen from street vendors or cooked up in a family’s kitchen. These delicious treats consist of thin layers of buttery pastry topped with a rich and gooey honey syrup. While these delicacies have no direct link to the Virgin of Guadalupe, they have long been part of the local tradition.

Dancing with the Dead in Mexico City

Places to Visit in Mexico During Day of the Dead