When Bikes + Ziplines Make a Love Child, You Get the Ultimate Aerial Adventure

Flying bikes may look like a cross between circus training and the Wizard of Oz, but we promise, zip biking is no evil endeavor (and there are definitely no clowns). In fact, it’s really quite a thrill. What may look like a sport that’s been MacGyvered in the sky, rest assured, the bikes are affixed to tightrope looking cables proven to withstand their weight. A unique activity sure to leave you on an adrenaline high, this is one of those things you just have to add to your bucket list. 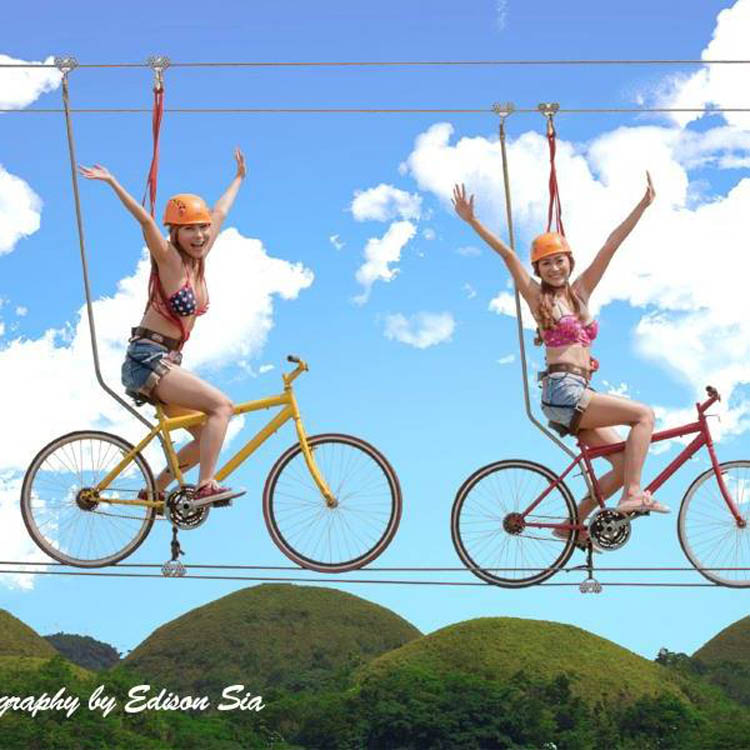 The OG inventor and pioneer of the bike zip, the 550-meter Bike Zip track is part of a suspended aerial adventure course that offers breathtaking 360-degree views of the Chocolate Hills below. And the best way to see the landscape? From up above. A unique geological formation in the Bohol province, the rolling hills may look like grassy knolls, but they’re actually dome-shaped limestone. One of the most popular tourist attractions on the island (and even commemorated on the provincial flag), the Chocolate Hills have been declared the country's third National Geological Monument and proposed for inclusion in the UNESCO World Heritage List. So in other words, get there while they’re still somewhat under the radar.

As it turns out, the Philippines really likes zip biking. Suspended on a cable over 100-foot high ravine with nothing but a wire to guide you to safety, the Anicycle at Kampo Juan in Bukidnon is a 600-foot long sky track that looks like a high-flying circus act. It’ll only take you a few minutes to reach the other platform, but those few minutes will leave you breathless. The best part? They actually have two bikes setup next to each other to race so if you feel the need for speed, take a friend for the ultimate bragging rights.

If you’re afraid of heights but intrigued by the prospect of zip biking, Cancun’s zip bike is much tamer. Suspended 23 feet in the air, their contraption has you leaning back in an enclosed structure with an actual seatbelt that looks a bit like a Disney ride. Actually an aerial nature tour, you’ll steer through grottos, a bat cave, sinkholes and mangroves, while keeping a look out for native flora and fauna.