Thornybush Nature Reserve is Everything You Love About Kruger National Park...but Better

By Suzanne Morphet
Save

Planning to go on safari in South Africa? You’re probably considering a visit to Kruger National Park, the country’s biggest, oldest and best-known park. At two million hectares – the size of Wales – there’s a lot of wildlife. Unfortunately, there are also a lot of people, about 1.5 million visitors a year. So even with all that space, it can feel crowded. Instead of going to Kruger like everyone else, you should consider a trip to Thornybush Nature Reserve right next door. This private game reserve borders the national park, yet you’ll feel like you have the animals almost entirely to yourself. 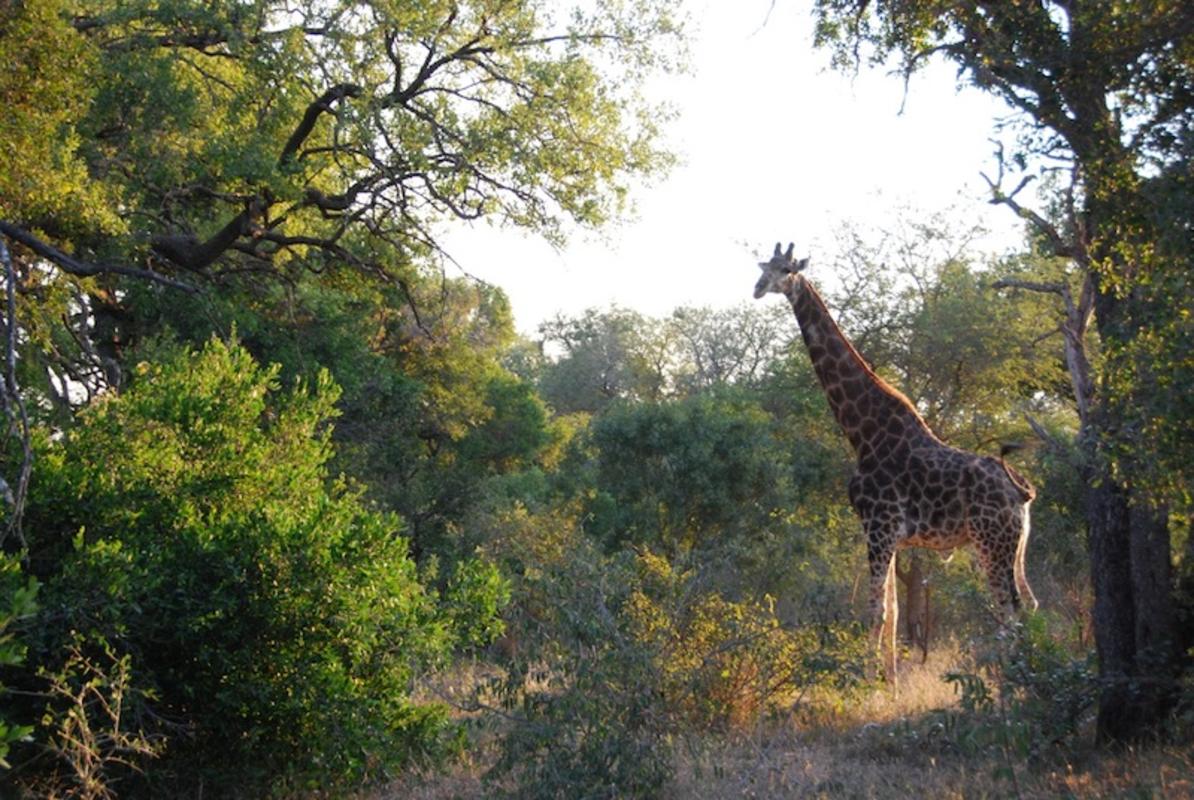 Thornybush encompasses 14,000 hectares of pristine wilderness. That’s tiny compared to Kruger, of course, but it’s still big enough to support a remarkable 48 species of mammals, including the Big Five – lion, leopard, rhino, elephant and Cape buffalo – and others. Perhaps the best thing about going on safari here is the peace and privacy you’ll enjoy while viewing game. “We allow only two vehicles at a sighting,” says Wayne, one of the guides. “We want people to feel that they’re the only ones out here.” 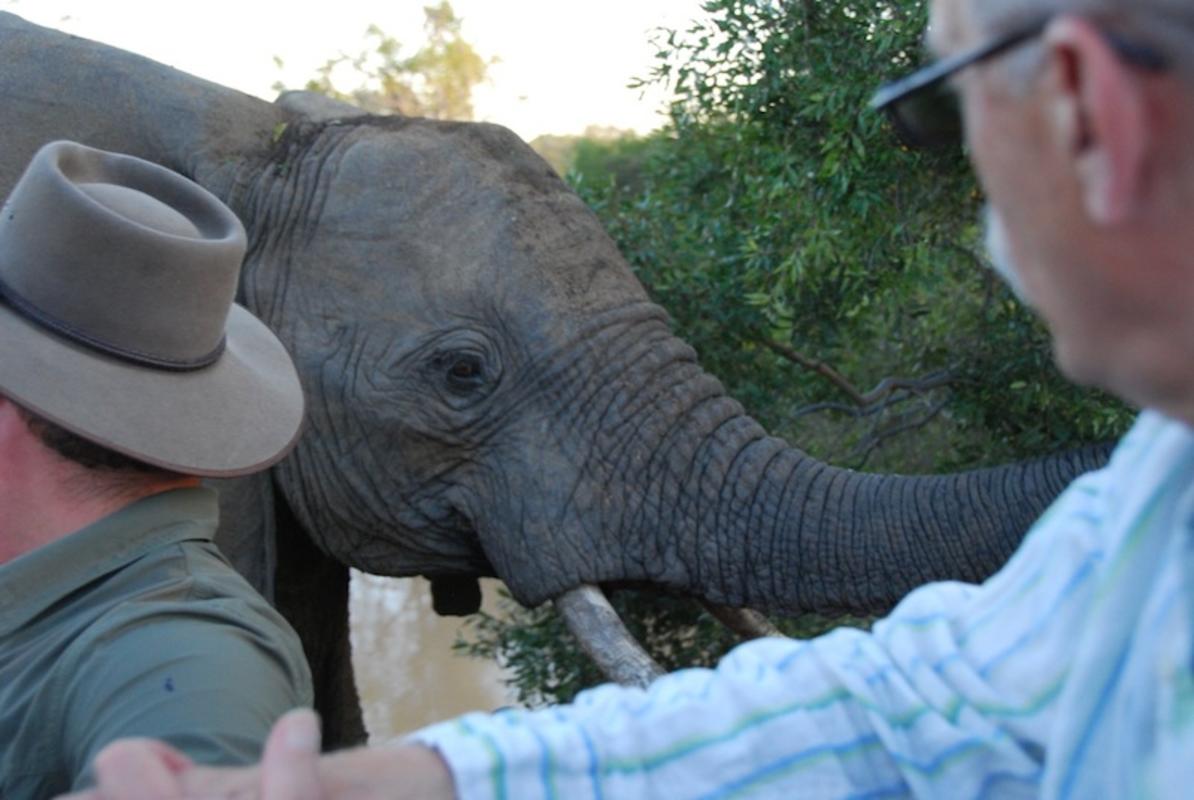 One of the biggest thrills at Thornybush is to leave your Land Rover and go on a walking safari. “The most important thing is never to run,” Wayne advises. “You can’t outrun anything out here.” Wayne and the other Rangers carry rifles, but would only use one as a last resort. That means taking precautions, knowing how to approach animals and knowing when to move on.

Because there are there no traffic jams with other safari goers, you can get very close to the animals – at least the ones who want to get close to you. “Elephants are some of the most relaxed animals out here,” says Wayne. “He was curious, just wanted to see what was happening.” If you’re lucky, you’ll also see elephants swimming in one of the small lakes on the reserve. They’ll immerse themselves completely, then get out and roll in the dust! 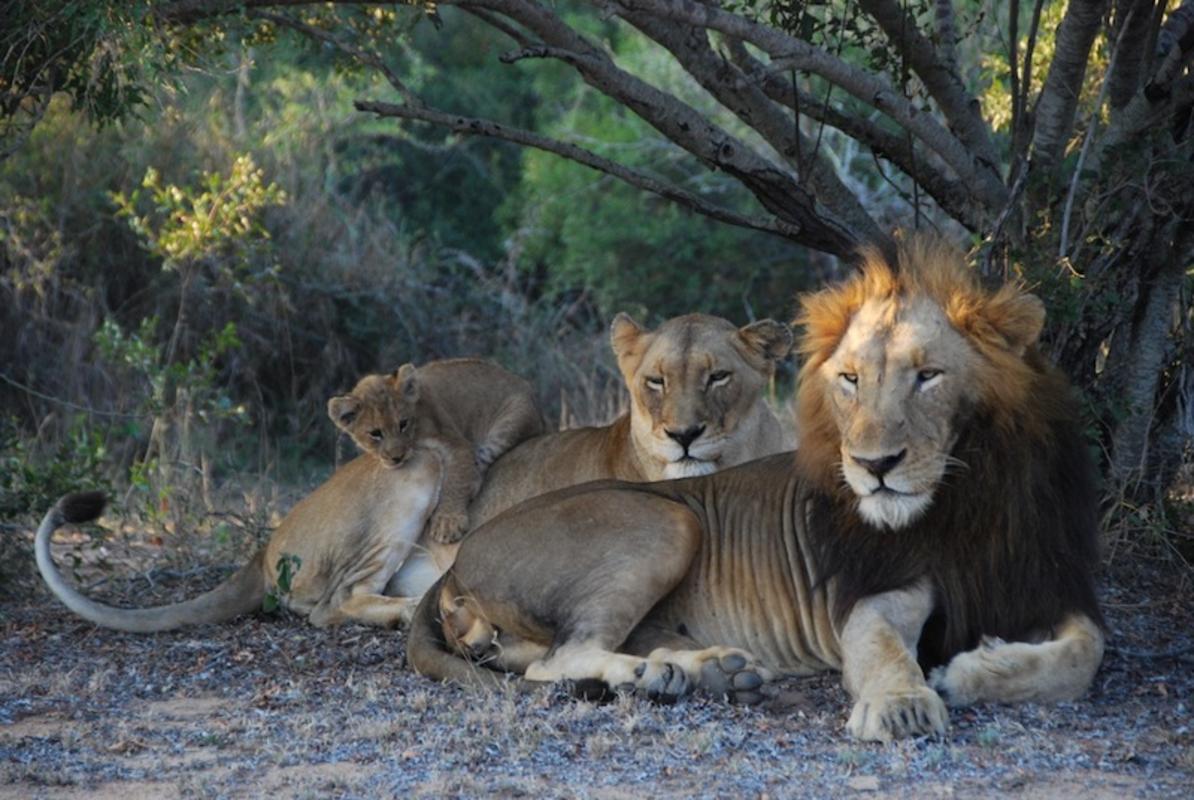 Early morning is the best time to look for lions at Thornybush. Dad had just returned from a night of hunting and was too tired to play with his cub. “He’s getting sleepy, his eyelids are closing” noted Wayne. But the cub was persistent, climbing over both parents, chasing his mom’s flicking tail, chewing on her ears and clubbing Dad on the chin with his tiny paws. Finally, his mom had enough and walked away to check out the Land Rover, giving the chuckling guests inside another thrill.

One of the challenges at Thornybush – and in national parks too – is ensuring that the number of wild animals doesn’t exceed the capacity of the land. According to Wayne there are about 17 lions at Thornybush. “It can’t support more or the impalas would take a pounding,” he says, referring to one of lions’ favorite foods. Thornybush was one of the first private reserves to use contraception as an alternative to culling lions and elephants. 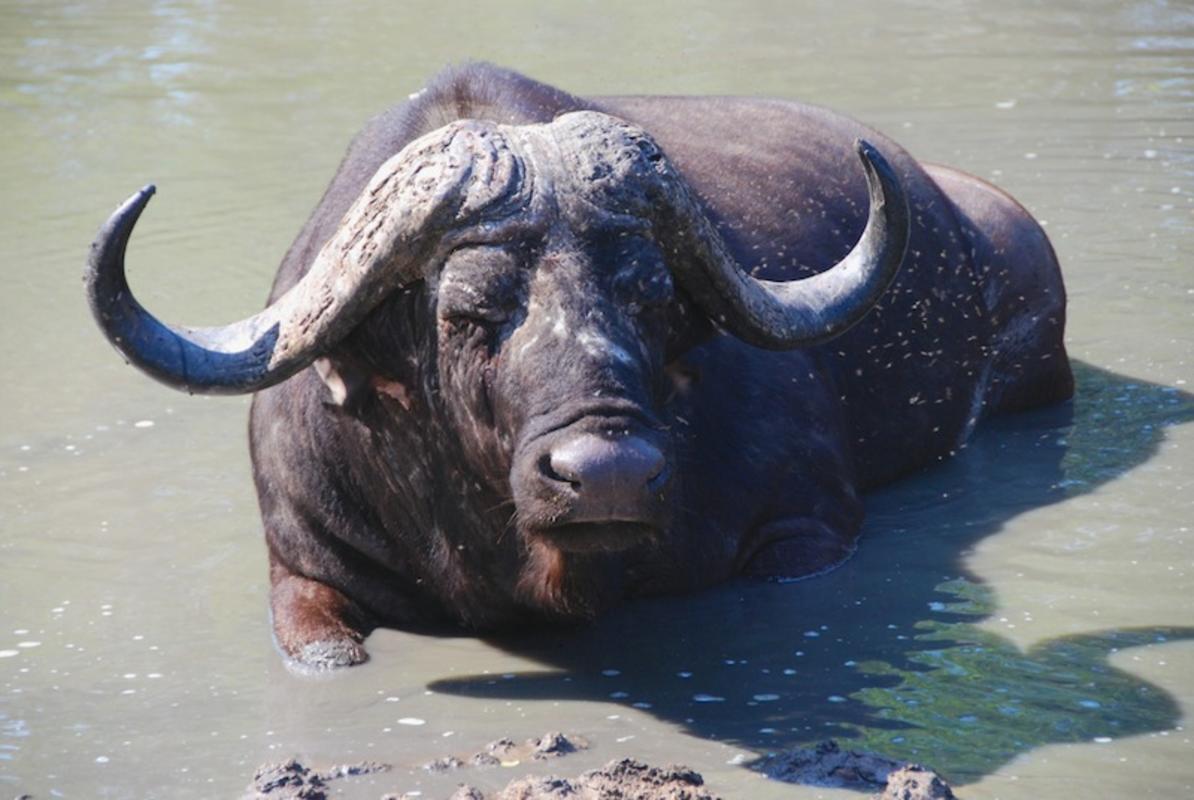 Cape buffalo can be very unpredictable. They’re also a lot faster on your feet than you might think. “Even though he’s 2,000 pounds, he could get here very quickly,” says Wayne, pointing to a buffalo in a muddy slough about 20 yards away. “In less than three seconds he can be standing with us.” Wayne directs the group so the sun is in the buffalo’s face, making it harder for the animal to see people. After a few minutes, Wayne motions everyone to leave. “We don’t want to overstay our welcome,” he whispers, and then confides, “I’ve been doing this for five years and still find these big animals get the heart racing.” 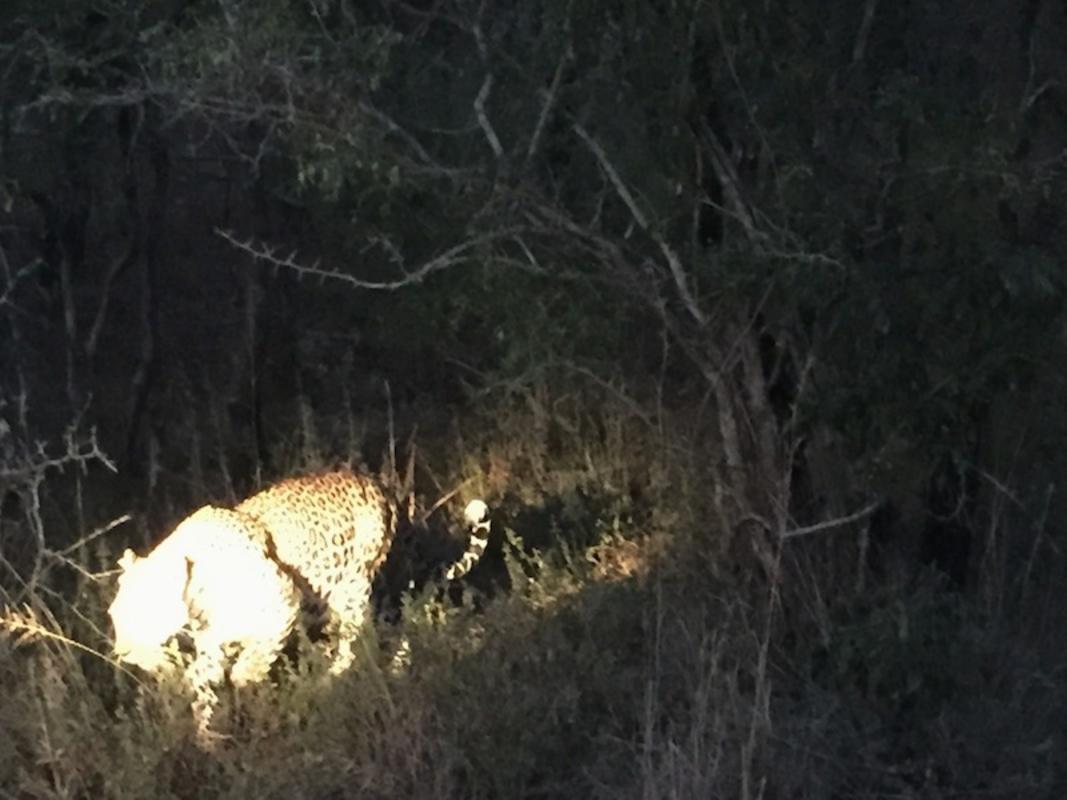 Of the Big Five, leopards are the hardest to spot. One evening after a sundowner in the bush – you’ll never go hungry or thirsty here – Wayne leads a group along a dried-up riverbed. He and John had spotted a pregnant leopard lying by some rocks here a few days earlier. But on this evening, she isn’t to be found. Suddenly, Wayne gets a call on his radio from another Ranger who has spotted a leopard – maybe the same one.

“Hold on guys,” says Wayne, stomping on the gas. “Keep your eyes open, she’s coming in this direction.” By now it’s dark. The stars are out and a sliver of moon has appeared in the sky, but it’s still too dark to see anything. John, the tracker, pulls out a large flashlight and pans the bush on either side. About ten minutes later the pregnant leopard emerges. 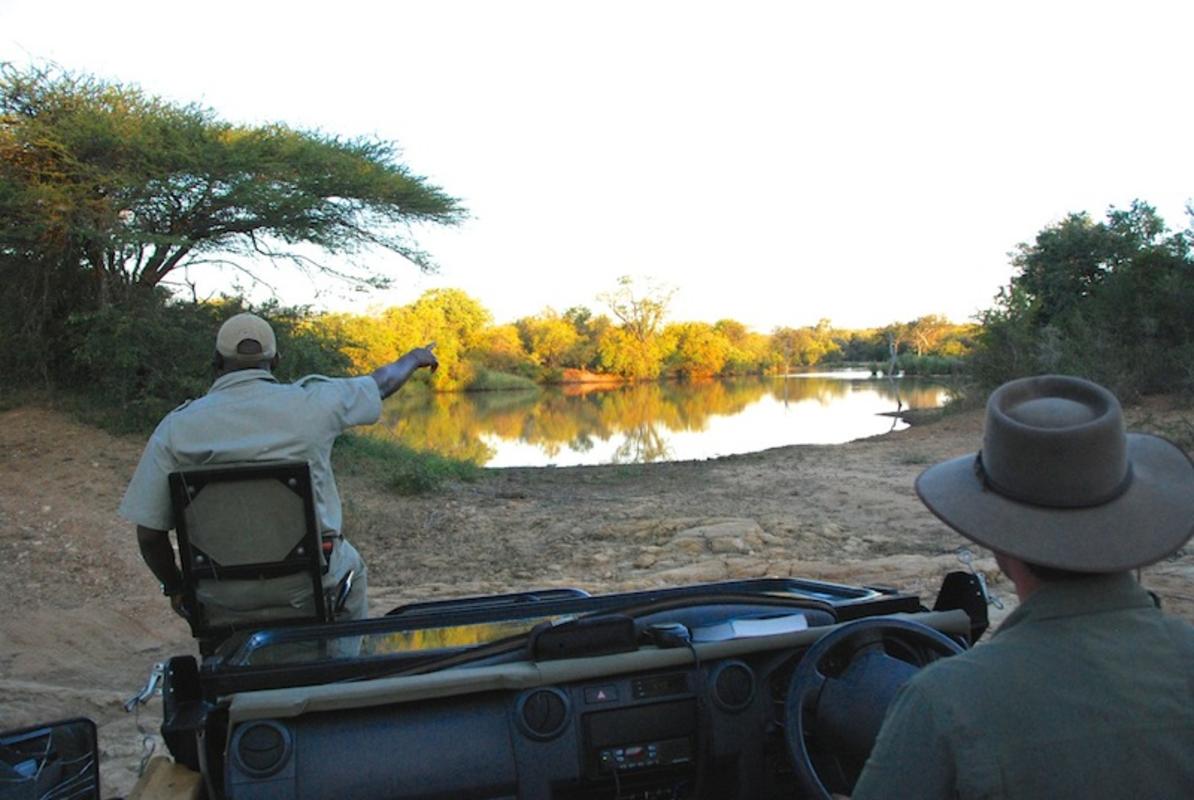 What You Can Expect

Soon after checking into your lodge at Thornybush, you’ll meet your guides and go for your first of two daily game drives. The guides work in pairs, like John and Wayne (no pun intended). John is the tracker and sits well in front of the Land Rover, where he can spot wildlife and direct Wayne, who is the ranger and driver.

You might think going on safari is easy, but it's actually a little grueling. You’ll sit for a few hours at a time (unless you’re on a walking safari), so a comfortable place to come back to between game drives is essential. At Thornybush you can go for a swim in the pool, relax in the open-air lounge with an amarula cream liquor (made from the fruit of the African marula tree) or – better yet – have an African-style massage. The spa at Thornybush offers some treatments you’ll find back home, but you’ll also see one you won’t be familiar with. The African Rungu massage involves a traditional wooden baton that looks like a rolling pin. Go ahead and try it – the long strokes and deep pressure make for one of the most amazing massages you’ll likely ever have.

Suzanne is a former CBC radio reporter and now a freelance travel writer and photographer. She's based in Victoria, BC.

www.suzannemorphet.com
Join 100k like-minded travelers by subscribing to iExplore
Join with Email
RECOMMENDED FOR YOU