Fun and Games at the Bikaner Camel Fair 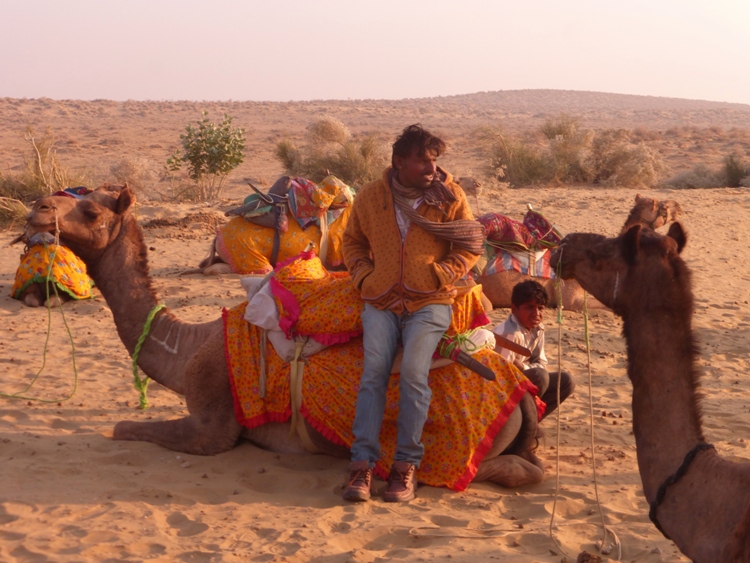 The princely state of Rajasthan is India’s largest state. Predominantly desert, its barren landscape has shaped and been shaped by the distinct and remarkable people who inhabit it — Hindus, Muslims, Jains, and desert gypsy tribes. Dynastic families, called Rajput, who rose to prominence in the 6th century, are a proud, majestic and martial people, resplendent in their colorful clothing, swords and massive mustachios. Despite sharing a border with Pakistan, these ancient states resisted Islamic invasions for more than 500 years. The Mughals left their mark in the graceful forts, palaces and private havelis. 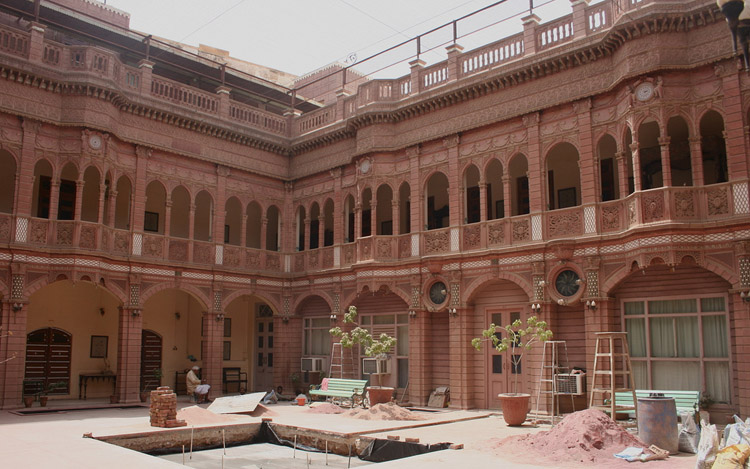 In Rajasthan, the camel is praised with an almost godly-like adoration as a source of milk, transportation, labor, and fiber. Once used in warfare, now it feeds the tourist industry. Traditionally camel pastoralists have traded their livestock at annual fairs throughout Rajasthan. The largest camel fair in India, and likely the world, is in Pushkar, where tens of thousands of people converge for five days of camel trading, games, music, shopping, and even a midway of carnival rides. A cozier two-day fair, more like your homegrown county carnival — but with camels — is held in the town of Bikaner. That was more my speed. 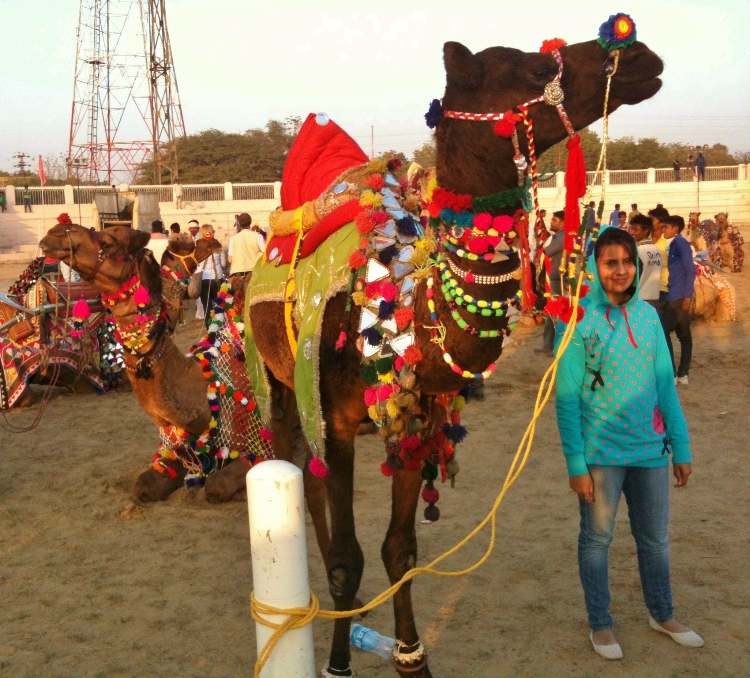 The main events occur on a sandy parade ground with several thousand attendees, mostly Indians, sporting Rajasthani turbans, with a colorful smattering of Rajputs in full regalia and magnificent curling mustachios. It was a welcoming crowd, encouraging us to join in the festivities, which are not just spectator sports. 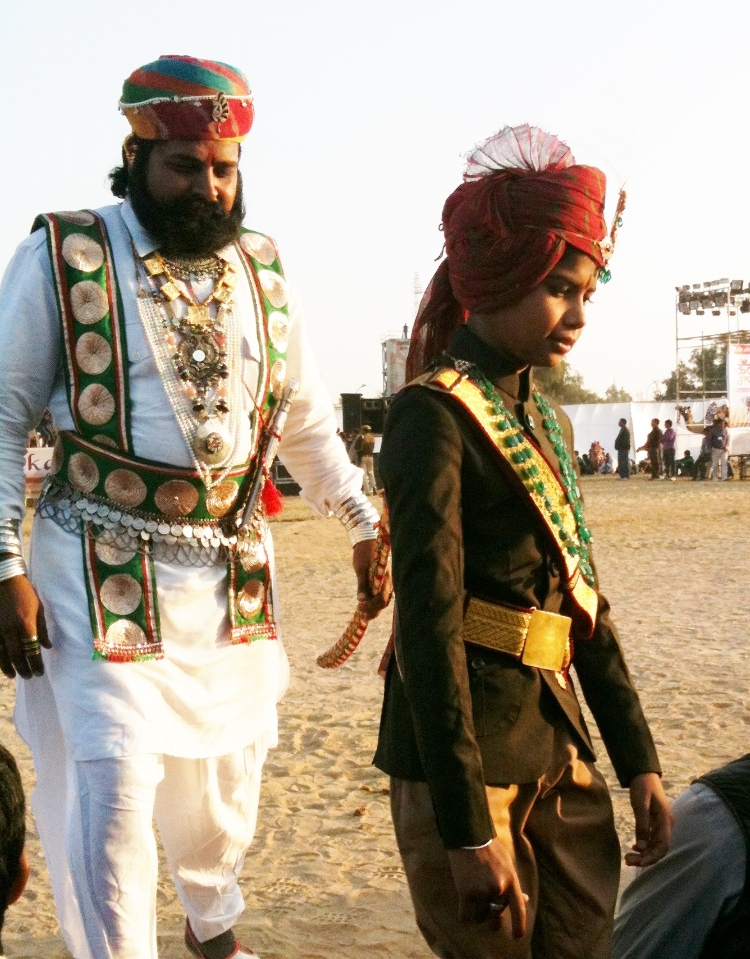 First up was the Kho-Kho match, an exhausting — and confusing for this westerner — game of tag. Somehow I ended up being the chaser three times, until my leg gave out and I collapsed in the sand, panting. Tug of War was more successful, with the foreigners pitted against locals. We rubbed sand in our palms, planted our feet firmly and gripped the thick rope, but it ended quickly in the Indian women’s favor. 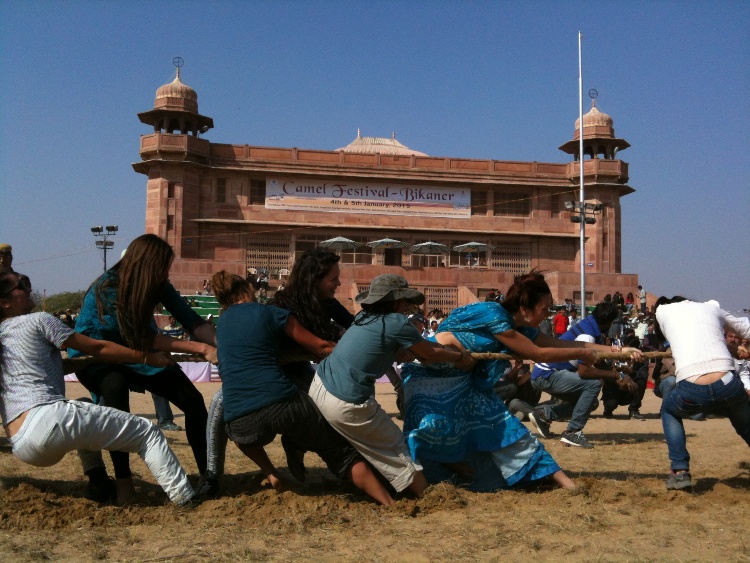 When the judges realized there were twice as many Indians as foreigners, the first tug was disqualified and we reset. The audience cheered and cameras flashed, and the foreigners prevailed! The next round was key — if we won, there’d be no need for a third match. We strategized, mustering our strength. It was a tough battle and we went back and forth with who was ahead, but ultimately the Indian women went down and we were victorious. The crowd went wild and the press swarmed. It felt like we’d won an Academy Award, with throng of bulbs flashing and everyone offering congratulations. If you ever wanted to feel like a hero, this is your chance. 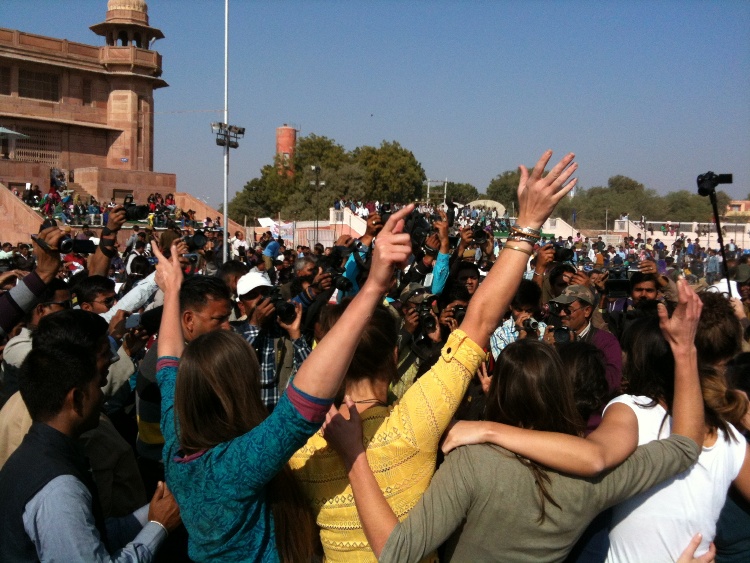 But we were there for camels and they were not to be outshined. There were dressy camels, proud in their colorful beads, pompoms and flowers. 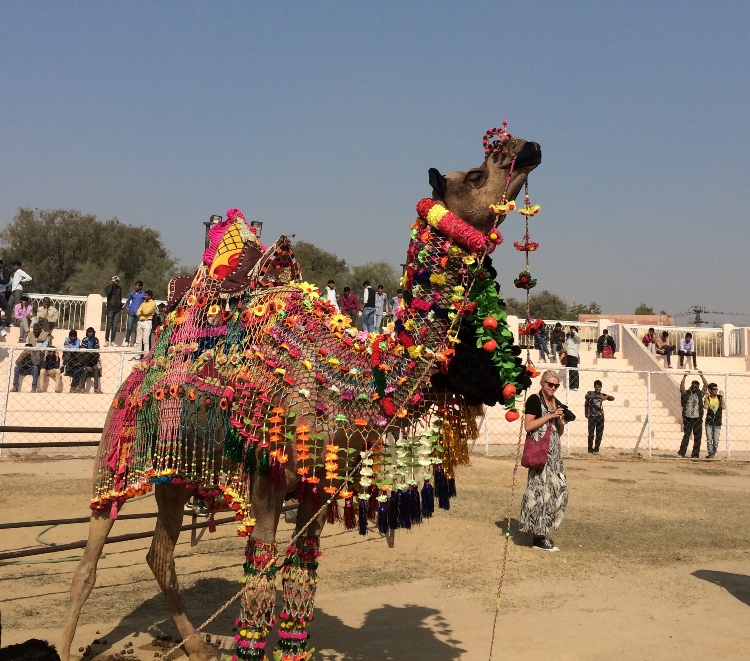 And artistic camels, their fur shaved into exceptionally intricate patterns. 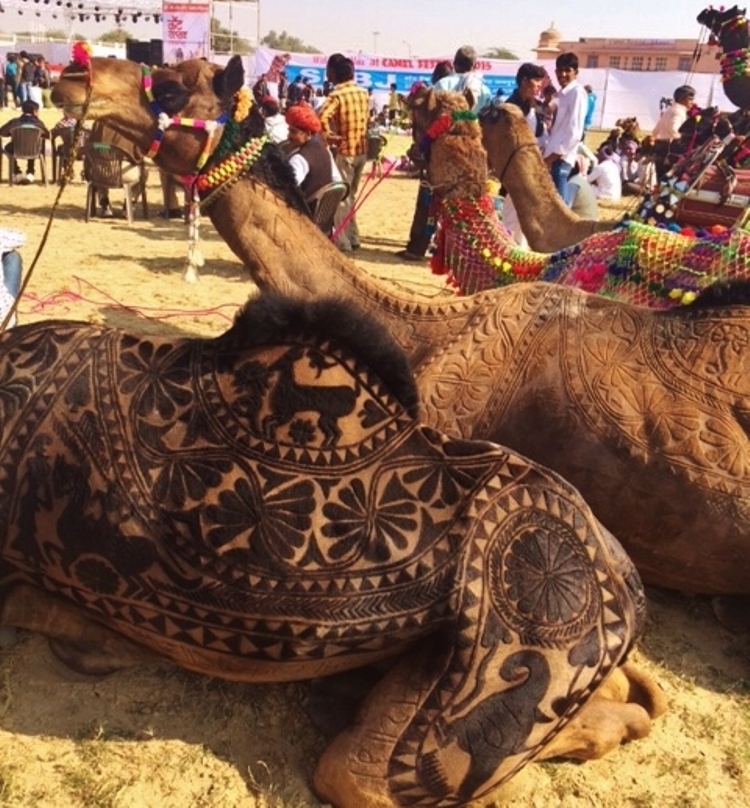 The crowd cheered on a wrestling match, a turban tying contest, musical chairs, various races, and the Camel Dance, a squeamish affair where the camels were directed to rear up, prance, and lay down while their cameleers sprawled up over them. They draped flower garlands over the necks of local dignitaries and wrapped the animal's mouths around the cameleer’s neck, leaving a trail of saliva running down his face. The cameleers performed Bollywood dance moves, while the announcer kept up a steady patter: “Man and camel! Keeping us absolutely spellbound!” 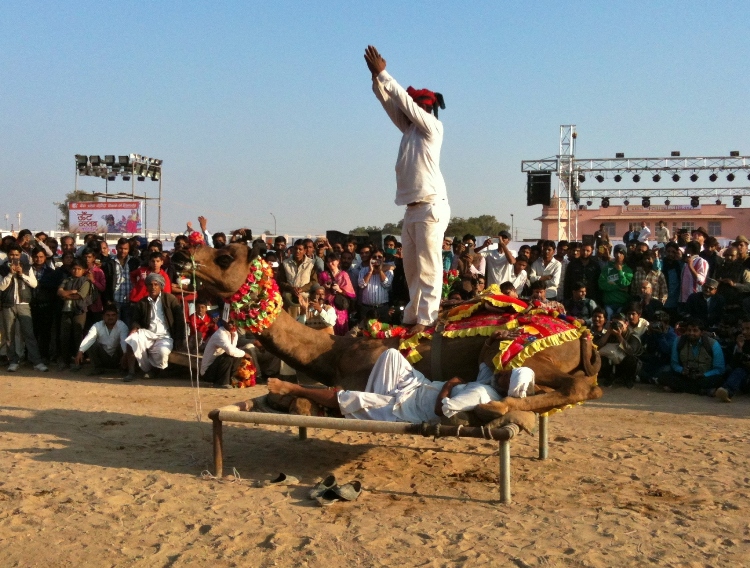 Each year, a "Mr. Bikaner" is chosen. When the victor approached us draped in his sash, I asked what he did to win. He replied, “Hard work,” before going on to explain that his ninth grandfather was an army chief for the Maharaja. As a reward for his bravery, he received 84 villages. 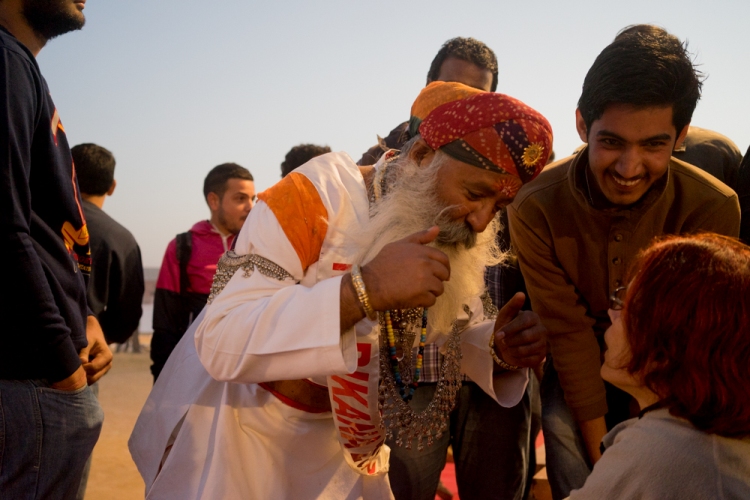 At sunset, performers from all over India took to the stage. Costumed and masked, they danced and sang of warriors and lovers, according to their local traditions. The hit of the night was the African diasporan troupe, whose descendants came to Gujarat 750 years ago, wearing skirts bejeweled with flashy peacock feathers.

Then came the fire dancers. Men in orange turbans pranced around a pile of burning coals. An older gentleman picked up a glowing ember, bounced it in his hands and tossed it in his mouth, spitting sparks out like a dragon. Others joined in, tiptoeing, running, and dancing across the glowing embers in no particular pattern or order. Caught in the moment, they began kicking the coals in the air with wild abandon, sparks flying, burning chunks skittering across the sand. The crowd jumped back as a dancer dropped a piece of burning coal in a spectator’s hand as if to say, "You too should celebrate fire!" It was so exhilarating, and I felt like dancing -- but not on hot coals. 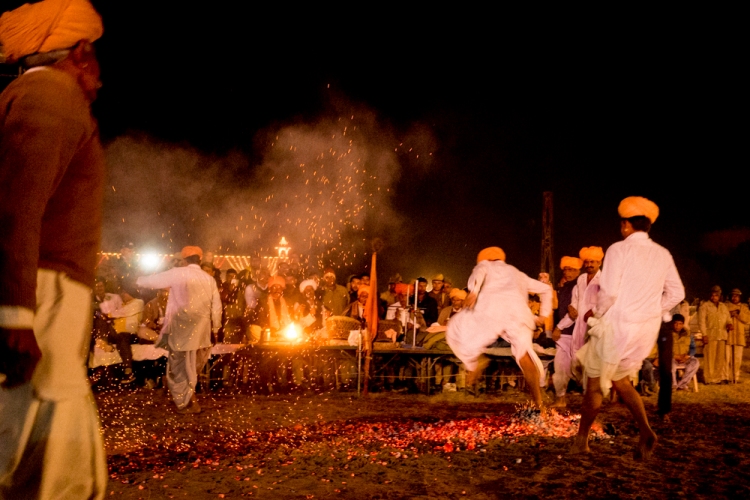 Bikaner can be reached by car or train from Delhi, Jaipur, Mumbai, Agra, Punjab and other major Indian towns. An annual event every January, everything you need to know about the Camel Festival can be found here. Spend a few days in the area as there’s plenty more to see in the urban jumble of Bikaner—the Junagarh fort, lavish sandstone havelis and palaces, camel craft stores, and a Jain Temple.