In a country where a heady mix of chaos, colors, flavors, traditions, and paradoxes seduces visitors all at once, you know your journey is going to be anything but ordinary. “Expect the unexpected,” is a helpful mantra when traveling in India, a country that’s often described as hard to understand but easy to love once you get to know it. Between the snow capped Himalayan peaks, notorious party beaches in Goa, centuries old rock cut temples, and tranquil yoga retreats in the jungles of the south, you’ll begin to understand why it’s called “Incredible India.”

Connect with nature in Kerala, also known as “God’s country,” where you’re guaranteed to find your inner bliss in the beauty of the backwaters peppered with swaying coconut palms. Alleppey, described as the “Venice of the East” by Marco Polo is a serene town of canals, lagoons, quiet beaches, and freshwater rivers.

The best way to explore is by houseboat; watching children play outside village homes enjoying traditional meals in quaint fishing villages with dramatic sunsets. For an even more immersive experience, spend a few nights doing a local homestay. Enjoy the relaxed pace of life with daily activities like taking a local cooking class or a beachside yoga session. 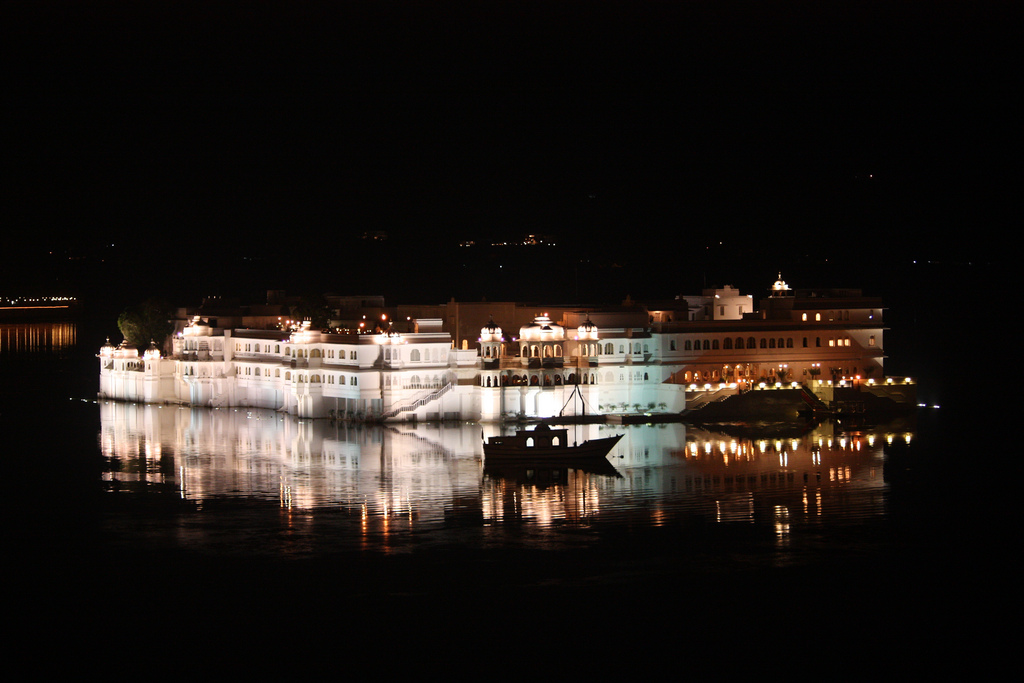 Udaipur, Rajasthan: The Grandeur of Maharajas

Being in Udaipur is akin to finding yourself within the pages of a grand fairytale. Set to the backdrop of beautiful Lake Pichola with narrow winding cobblestone streets, traditional bazaars, temples, and larger-than-life palaces, it’s no surprise that Udaipur is the most romantic of Indian cities. History lovers will fall in love with iconic sights such as the City Palace, Rajasthan’s largest and most opulent palace with Rajasthani and Mughal architectural influences and lush landscaped gardens, the Hindu Jagdish Temple and the 18th century Bagore-Ki-Haveli, which houses many interesting cultural exhibits.

To really be swept off your feet, take a boat ride down Lake Pichola to visit the old world charm of Lake Palace’s majestic white marble on Jagniwas Island. Formerly a royal residence that’s now a luxury hotel, this fantastical palace built in 1754 impresses with it’s spacious courtyards, lotus ponds, regal décor, and second-to-none service. The fine dining restaurants are not open to non-residents but a stay at the hotel is an experience in itself and worth the lofty price tag, even just for a night. 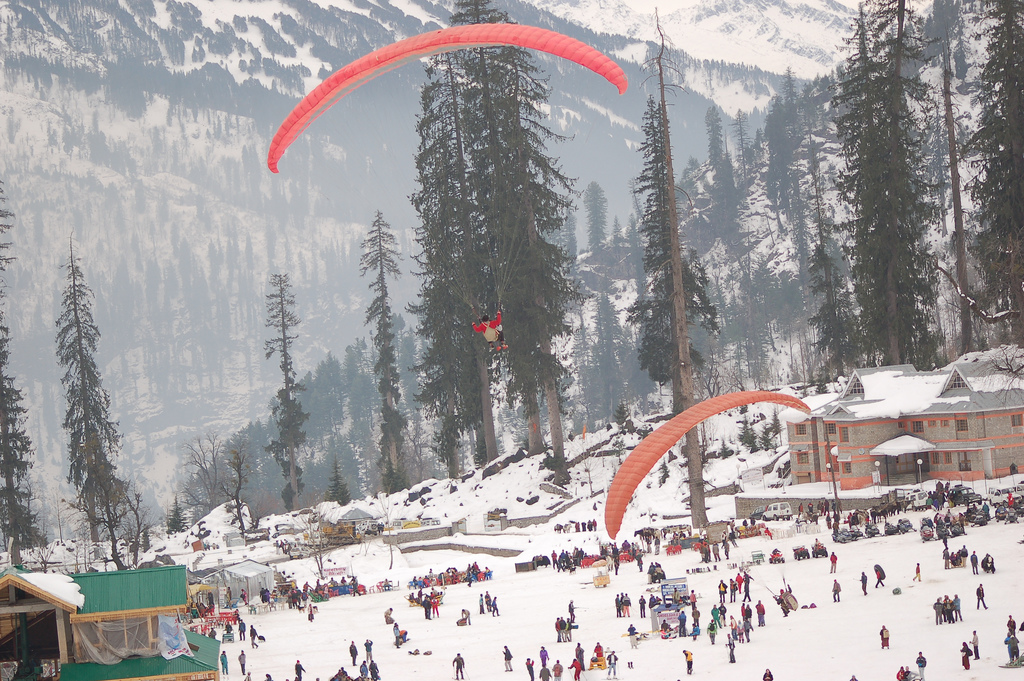 Paradise for mountaineers and adventure addicts, Manali, located to the north of Kullu Valley is a resort town situated at the heart of the Himalayas. It’s very popular with domestic tourists looking to experience the first snowfall of the year, but equally so for trekkers wanting to explore the winding trails and breathtaking sites. Nestled among white peaks and dense pine forests, Manali is the ideal base to seek out activities in the surrounding rivers and valleys.

Between January to March, head to the Solang Valley to ski, snowboard, zorb, and paraglide. White water rafting enthusiasts will enjoy the icy rapids of the Beas River. For spectacular views, mountain bike from Manali to the highest motorable pass in the world, Khardung La at a height of 18, 370 ft. via other Himalayan passes such as Rohtang Pass and Tanglang La. Rock climbers and mountaineers can undertake basic or advanced training sessions with the local Mountaineering Institute, wildly popular for aspiring Everest climbers. There are a number of treks in the region ranging from a few hours to multi-day excursions such as Chandertal, Deo Tibba Base, Manala, Manikaran, and the Great Himalayan National Park. Manali also serves as a gateway to Leh Ladakh and is often used as a starting point for motorcyclists and hikers heading into the region.

One of India’s most modern and livable cities, Mumbai is home to all the clichéd paradoxes of a true cosmopolitan paradise. Its residents come from all four corners of the country, but they will beam with pride when calling Mumbai home. In the city, there’s unmistakable lively; a dynamic sense of purpose is apparent in the rushing crowds of commuters through the Dadar Railway Station, buzzing street stalls selling samosas and the famous “Bombay Sandwich,” bustling markets in Colaba, and glamorous nightclubs where the crème de la crème of Bollywood stars party the night away.

A visit to Mumbai is incomplete without a visit to the Gateway Of India, its most historical landmark. Other points of interest include the Prince of Wales Museum and the Chhatrapati Shivaji Railway Terminus, a UNESCO heritage site built during the British rule. Wander through the Fort to soak in the colonial architecture and enjoy a meal at a Parsi eatery. Shop for antiques and vintage collectibles at Chor Bazaar, leather jackets and bags at Dharavi, textiles at Gandhi Market in Sion and touristy souvenirs on the streets of Colaba. To see the city’s religious side, visit the Siddhi Vinayak temple where crowds of devotees gather for hours just to catch a glimpse of the city’s beloved Lord Ganesha. Head to Elco in Bandra for a taste of Mumbai’s famous street food; pani puri, pav bhaji and sev puri. To mingle with the city’s poshest residents, dine at one of the restaurants in the Palladium Hotel and party at one of its exclusive clubs. When you’re ready to escape the city, spend an evening at Marine Drive, Mumbai’s glittering sea facing promenade, also referred to as the “Queen’s Necklace.”

Bodhgaya, Bihar: A Journey for the Soul

Of great religious significance to Buddhists, the town of Bodhgaya in Bihar is a peaceful spiritual retreat in a country where religion governs many, if not all aspects of life and society. Considering that this is where Prince Siddharta obtained enlightenment and went on to become a Buddha, it’s no wonder that Bodhgaya is a pilgrimage site for Buddhists the world over.

Begin your spiritual journey by visiting the UNESCO listed Mahabodhi Temple in honor of the site where Buddha obtained enlightenment. Relax in the Meditation Park and take it all in. There are many monasteries in Bodhgaya, each with its own distinct style of architecture such as the Japanese Indosan Nipponji Temple, Tergar Monastery, Namgyal Monastery, Tibetan Karma Temple, and the Vietnamese Monastery. For a truly spiritual experience, enroll in a ten-day Vipassana meditation program to learn the ancient techniques inner peace, discipline and compassion. There are also courses available for those who would like to learn about the history and spiritual practices of Buddhism.