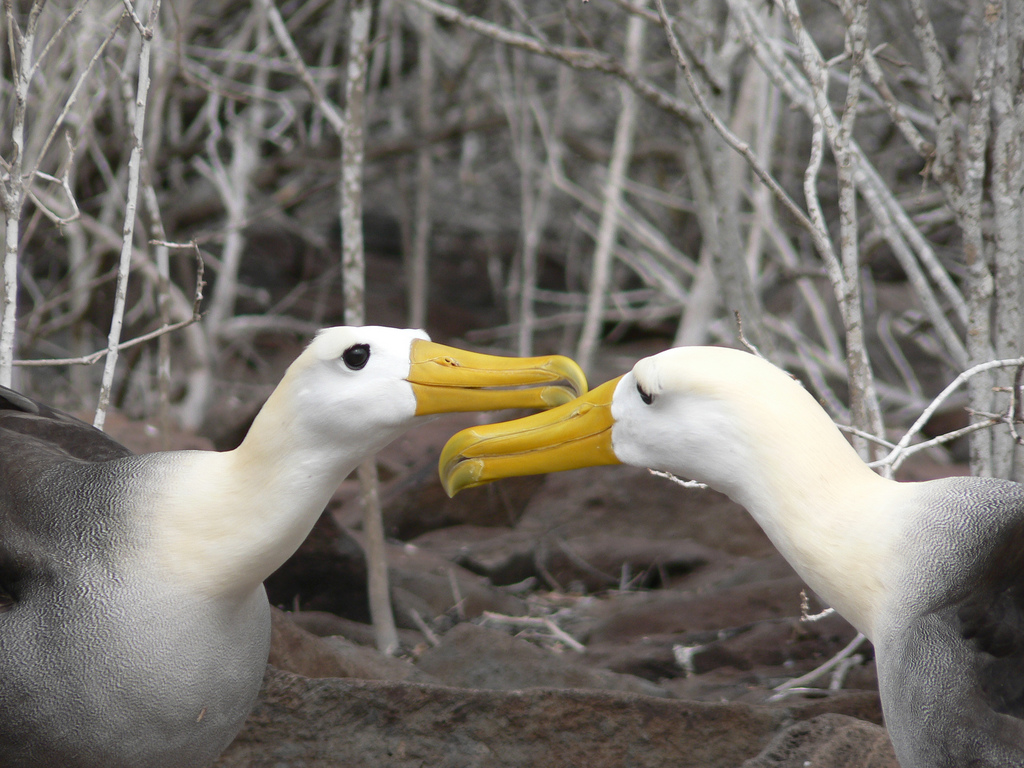 At certain times of year, there is an opportunity to observe the waved albatross courting behaviors, a bird which has one of the most extraordinary courtship rituals among seabirds. Courtship dances can be seen almost every month they are present in the islands, however the courtship of newly-paired albatross and well-established pairs who did not breed that year, can be seen performing the elaborate courtship ritual in the second half of the breeding season, peaking in October.

The first arrivals to Galapagos usually form large “rafts” of individuals who rest out at sea off the southern cliffs of Espanola, where they can easily catch the strong southeast trade winds. It is thought that this is where some of the courtship begins, or perhaps where young adults start their search for their future lifetime partner. The first to arrive on land is generally the male albatross who then awaits the female who arrives later, possibly even weeks later. The first females who arrive are oftentimes accosted by several males in hopes of an extra-pair mating opportunity, however are usually successful at putting them off until their own mate can be found.

Bryan Nelson in 1968 used the term “ecstatic ritual” to describe the courtship of the Galapagos waved albatross. It is a highly ritualized dance where each partner must initiate and react with precision to movements initiated or made by its partner. Co-operation is the key and tells much about potential future compatibility between the two birds. The pair faces each other spaced apart so that when they lower their heads and stretch out their necks, their beaks can just touch. Once their long, yellow bills are in contact, they quickly move and slide the ends around each other with gentle strokes and taps making a hollow, wooden-sounding noise. This bill-circling behavior is central to the courtship, and the pair repeats this movement frequently throughout the ritual. At some point, one or the other (most often the male) will stand abruptly upright and stare forward. The other will continue the bill-circling behavior until the other lowers its head and picks up where they left off. Another change of pace occurs when one individual places its bill against its flank in a ritualized movement of preening, at which point the other starts to “clapper” its bill together so quickly it becomes a blur and the sound one long, loud hollow drumming. This abruptly ends when the noise-maker throws up its head in a sky-pointing maneuver and issues a high-pitched sliding call. This will suddenly end with both birds returning to their bill-circling behavior as before.

Another part of the courtship dance involves a highly-stylized and exaggerated walk. With head swaying deeply from side to side and the chin tucked close to the chest, they parade a few steps, often with the partner following, to a chosen spot. A very different display is performed to indicate the ownership of a nest site. Here, Bryan Nelson describes it as a “forward bobbing.” With the bill held at a stiff 90° angle, the head and neck are then vertically “bobbed” up and down pointing at its feet while a wheezy, low call is given.

All these behaviors pick up speed with practice, and sometimes on the breeding grounds with multiple pairs courting, the air can become a frenzy of calls and movements, with the more aggressive males leading the way in beak-gaping and even chasing off rivals on occasion when several individuals get involved in the dances of others nearby.

After an egg has been laid and after the chick has hatched, some of these ritualized behaviors continue to be performed and serve to re-establish the pair-bond and define egg/chick ownership after lengthy absences at sea. The sounds and movements also play an important a role in the chick’s learning about its own future adult behavior.

Amazing Animal Encounters in the Galapagos