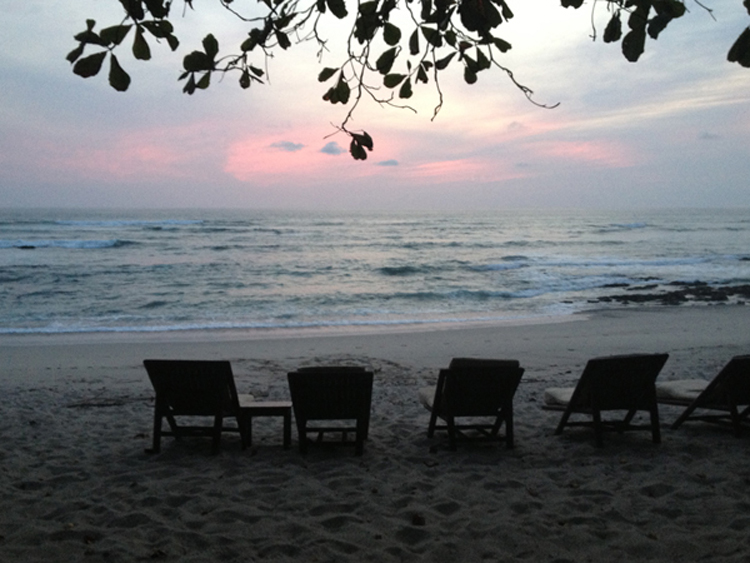 Nestled along the coast of the Nicoya Peninsula, sandwiched between rainforest covered hills and long white sand beaches, lies a hip community of Costa Ricans, surfers, yoga enthusiasts and monkeys all aligned in their pursuit to live “pura vida.”

This Costa Rican locale remains a little known treasure, mostly due to the fact that you have to drive along some pretty rugged terrain before arriving. The unpaved dirt roads require fancy maneuvering to avoid potholes. Getting there also takes longer because nobody is in a rush. For those travel junkies who have time and are looking for the perfect blend of beach, surf and wildlife, and who tend to sidestep generic establishments in in lieu of something more unique, Florblanca is the ultimate in lodging in this remote area.

In essence, the Florblanca resort is a community of elegant villas designed to maximize the feeling one would imagine having if he or she were living in a jungle paradise. It’s everything a Costa Rican establishment ought to be.

Upon entering, you stroll paths surrounded by tropical plants and trees, blooms of exotic flowers that perfume the air while magnanimous iguanas sit quietly. This is what you expected Costa Rica to look like and the question then becomes what you are now inspired to do. Are you ready for a relaxing siesta reclined gently on a hammock along the beach? Or calmly exhale as you move into the downward facing dog pose to go through your vinyasa? Are you ready to zip-line through the forest? Maybe you’re up for a horseback ride on the beach?

Whether you are starting your day or winding down, the Nectar Restaurant serves up fresh and healthy meals, all prepared with locally grown foods. Guessing what the fruit drink of the day would be was a thrill. Despite the organic backdrop, all meals were prepared to bring out the ultimate flavors in every ingredient used. The fish had flavors that carried with it the essence of the ocean whether it was a dish of fish tacos or the red snapper served over a savory mash of yucca.

I would be remiss if I neglected to touch on the charming features of each villa. Each is a formation of indoor and outdoor spaces, designed to maximize the view, sights and sounds. Each villa lies quietly in it’s own private section on the property. Living spaces are open with large sweeping views of the ocean, jungle and property. If you want some additional privacy, patios close and doors lock to keep your space self-contained. Bathrooms have large soaking tubs and the showers have open spaces above so you feel like you are showering in the outdoors. It’s a perfect mixture of modern amenities and all that is native to environment.

For anyone interested the quintessential boutique resort, it’s worth the effort to get there. It’s an uncorrupted refuge from the daily grind.

Costa Rica: A Trip the Whole Family Can Agree On

Costa Rica: A Trip the Whole Family Can Agree On