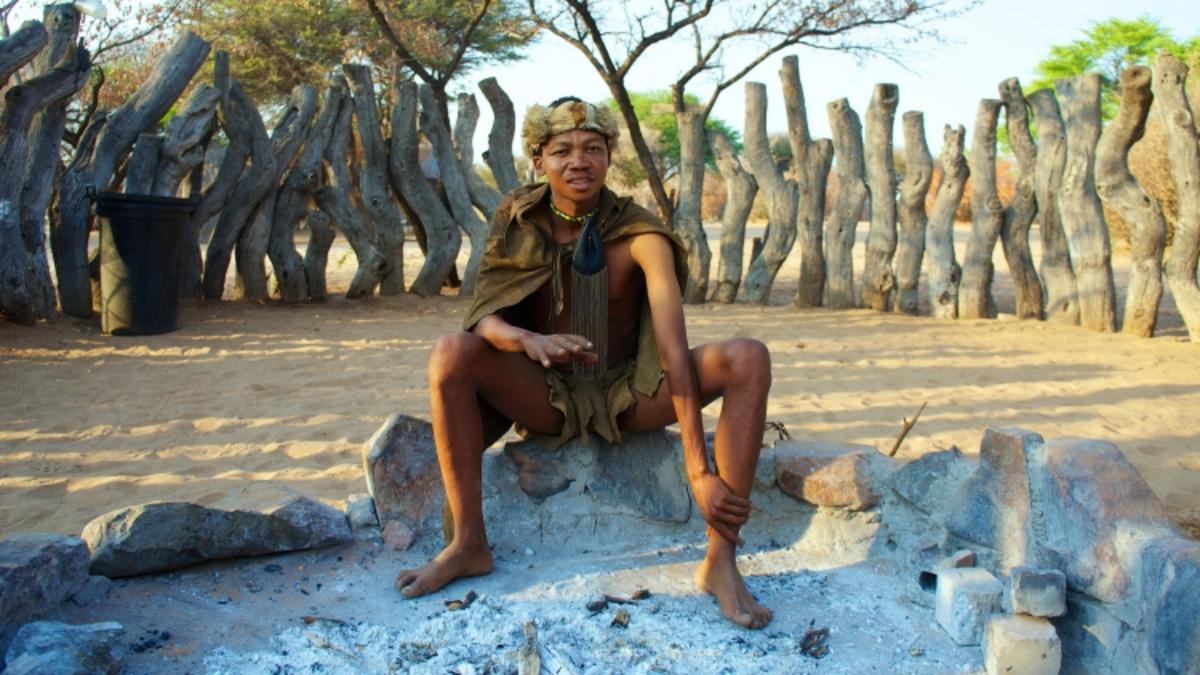 Botswana is a young nation, having achieved independence only just over six decades ago, trailing behind a history of unsympathetic British colonization, conflicts between tribal enclaves and disturbing migrations by ethnic groups and the Boers. In spite of its history, the multi-ethic nation is joined together by its loyal patriotism and is one of the most successful African nations at the present time.

The Batswana are descended mainly from Bantu-speaking tribes who migrated southward into the region 1500 years ago, living in tribal enclaves as farmers and herders. The migration somewhat displaced the indigenous hunter-gatherer Bushman tribes of the San and Khoe, who’d lived in the Okavango-Makgadikgadi area for 20,000 years. Several Iron Age cultures flourished from around 900 AD, with the Toutswe, based in the eastern region of what is now Botswana, relying on cattle held in kraals as their source of wealth.

In contrast, the adjacent Mapungubwe tribes relied on gold as proof of status and hierarchy. By the 13th century, Toutswe lands were exhausted from drought and over-grazing, and the culture collapsed in spite of its success as a trading nation. Until the arrival of Europeans in the 19th century, tribal way of life, including the prestige granted to the owners of large herds of cattle, reigned supreme across the region.

The great 1830’s Boer trek from South Africa’s Cape Colony to the northeastern interior of southern Africa caused the displaced Amandebele tribe, led by the warrior Mzilikazi to attack their northern Batswana neighbors and force them to pay tribute. The region soon descended into anarchy, with the Bakololo tribes entering into conflict and the Boers themselves fighting for a share of the land. The war continued until 1853, when a treaty was signed between the Boers and the Batswana.

Around the same time, missionaries from the London Missionary Society began infiltrating the region in an attempt to spread Christianity throughout the tribes. The famous explorer David Livingstone was one of the first to arrive and founded a school in Kolobeng in 1845. Gaborone came into being around 1880, at first as a tiny settlement alongside a fort built by Cecil Rhodes, founder of the De Beers diamond-mining company. The region was given over to Rhodes’ British South Africa Company in 1895.

When Botswana finally achieved independence from Britain in 1966, Gaborone became the new country’s capital due to its experience as an administrative center, as well as its proximity to the railroad and a reliable source of fresh water. A building frenzy resulted and within a few years, the sleepy town had changed to a small modern metropolis with a population of 5,000. Its rapid growth since then has drawn millions from the rural heartlands, and the city’s population now stands at almost 25 percent of Botswana’s total population of two million.

Every one of the many ethnic cultures in Botswana has its own heritage of myths, legends, rituals, values and traditional artistic norms. However, the overlapping similarities between the different components create a homogenous culture, giving a rich and colorful patchwork of the diverse whole. Marriage rites and ceremonies differ considerably between the tribes, but all are accepted in the many intermarriages taking place.

Setswana, originally the tongue of the Tswana group, is the official language of Botswana, with English the main business language. Various Tsawna tribes speak dialects of Setswana, while others speak unrelated languages at home, but use Setswana in their everyday life. Batswana are proud, strong people, with a sense of unity linking them all to the democratic and peaceful development of their country. The dominant religion is Christianity, with a number of sects represented.

The modern lifestyle has permeated the cities, but traditions are still very much in evidence in the rural communities through clothing, housing, dance and performances, music, food and rituals, all rooted in the Setswana language. The entire country celebrates its diversity on the annual Botswana Culture Day, and the President’s Day, also annual, involves local art and craft contests, with the winners competing in a national finals.

Poetry is considered one of the premier cultural arts, and is alive and well in 21st century Botswana. Recently, the ancient oral tradition of myths and the unique praise poetry were transcribed and recorded, ensuring the craft is not lost over the generations. One of the country’s most iconic symbols is the baobab tree, under which local matters were discussed and rulings handed down by village elders for centuries. The massive trees are still the center of rural life for many Batswana. The hunter-gatherer Bushman communities stand apart, with their own ancient culture and way of life, although since the 1990’s, many tribes have been moved from their ancestral lands and forced into farming by the government.

Consultation is important here, within the family, the local environment and at governmental level from the President downwards, with all those involved having a say. In rural areas, cattle are still a sign of wealth, and traditional medicine is practiced along with its modern equivalent. A smile and handshake are essential greetings, with the left hand placed under the right elbow. The same gesture shows appreciation for a gift or assistance. Politeness in everyday life is important as Botswana is a peaceful place.

Click here to learn about the Weather in Botswana