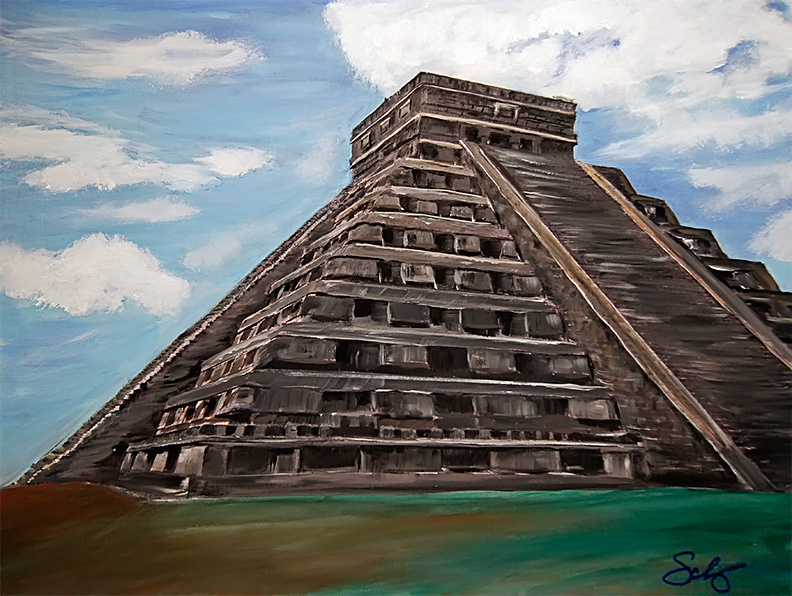 Just 25 miles southeast of the city of Merida, Mexico, stands the ruins of Chichen Itza, the most famous of the Mayan archaeological sites in Yucatan. Chichen Itza became a prominent city around 600 AD. The Mayans were known for their proclivity toward arts and sciences flourished. The city fell nearly 700 years later.

Within the city is the Temple of Kukulkan, called El Castillo by the Spaniards, site of the largest and most important ceremonial structure at Chichen Itza. The 90-foot tall pyramid was built during the 11th to 13th centuries on the foundations of previous temples. The architecture of the pyramid is situated to mark the solstices and equinoxes. Each face of the four-sided structure has a stairway with 91 steps, which together with the shared step of the platform at the top, add up to 365, the number of days in a year.

Northern Yucatan’s arid climate meant a lack of above-ground rivers. The Mayans found water in natural sinkholes called cenotes. The Mayans threw sacrificial objects and human beings into the cenote as a form of worship to Chaac, the Maya rain god. Inside, archaeologists found jade carvings, pottery, gold and silver artifacts and even human skeletons.

The Observatory at Chichen Itza, called El Caracol or snail in Spanish, contains an interior staircase that spirals like a snail’s shell. A round tower at the top of the platform contains an observation chamber at the top where the Mayans tracked celestial bodies.

Also within the city is the Great Ball Court with stone rings 20 feet high. To the north, south and east sit temples where rituals performed before the games took place. Paintings show players keeping the ball in the air as long as possible using their hips. Teams scored points when the ball went through the stone rings. And someone always seemed to be sacrificed at the end of the game. Some claim it was the losing team’s captain, while others say it was the winning team’s captain since he had the virility the god’s needed.

10 Adventures to Have in Mexico

Who are the Mayans and Why Do They Think the World's going to End?