Are you looking for a quirky guide to shape your summer travels? Hoping to make your friends jealous with the most bizarre backdrops on your Instagram feed? Consider adding America's oddest-shaped buildings to your bucket list. These architectural gems don't merely act as a static setting for your photos — you can actually explore inside all of them.

These buildings may be odd-shaped, but they can definitely help shape some of your most unforgettable travel memories. 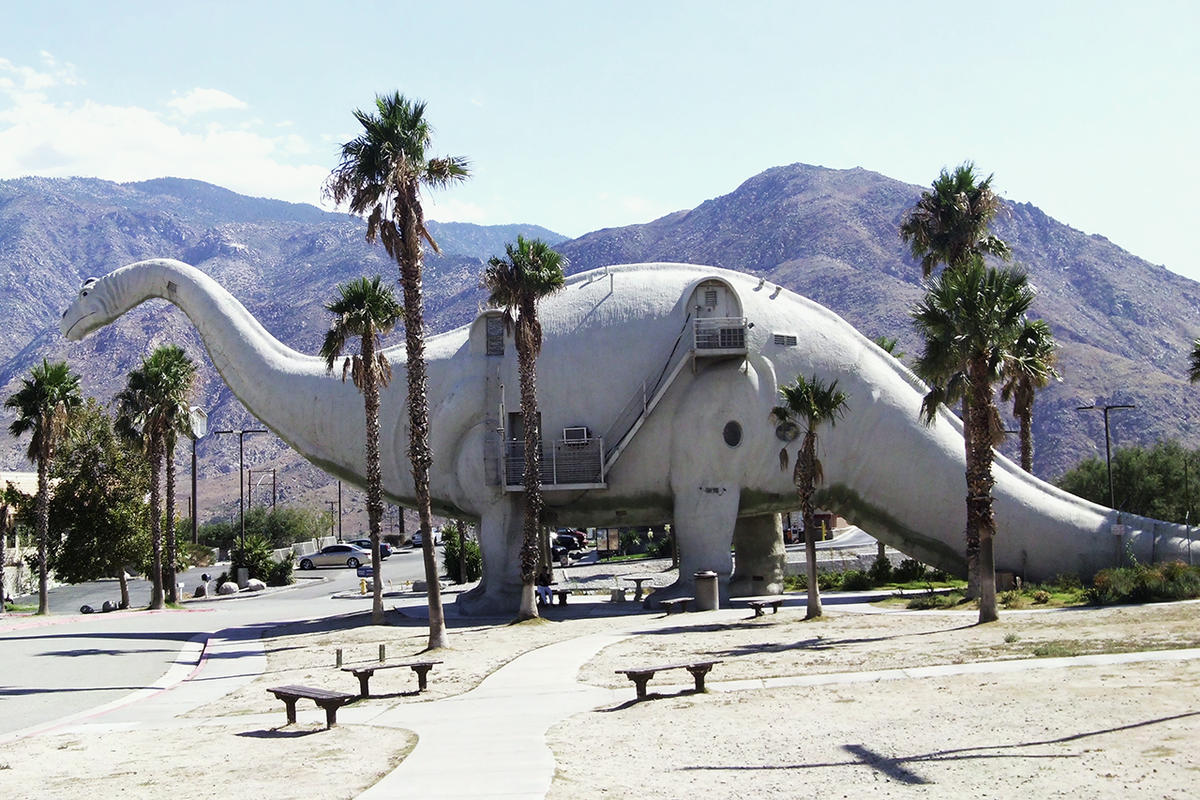 It's hard to deny the urge to explore the scenic views of the California mountains from the mouth of a Tyrannosaurus rex. Located on I-10, these picturesque dinosaurs may look familiar to fans of Pee Wee's Big Adventure, or Tears for Fears' music video for "Everybody Wants to Rule the World." Claude K. Bell, sculptor, artist, and owner of the Wheels Inn, originally erected these dinosaurs as a way to attracting people into his diner. Dinny, the Brontosaurus, was the first statue he began building in 1964, eventually completed over a span of 11 years. Mr. Rex was built in 1981 with the intention of being a slide. Although not currently unusable, you can still climb to the top of the three story tall overlook. The Cabazon Dinosaurs now serve as a creationism museum. Inside Dinny, the Brontosaurus, is a gift shop as well as part of the museum. 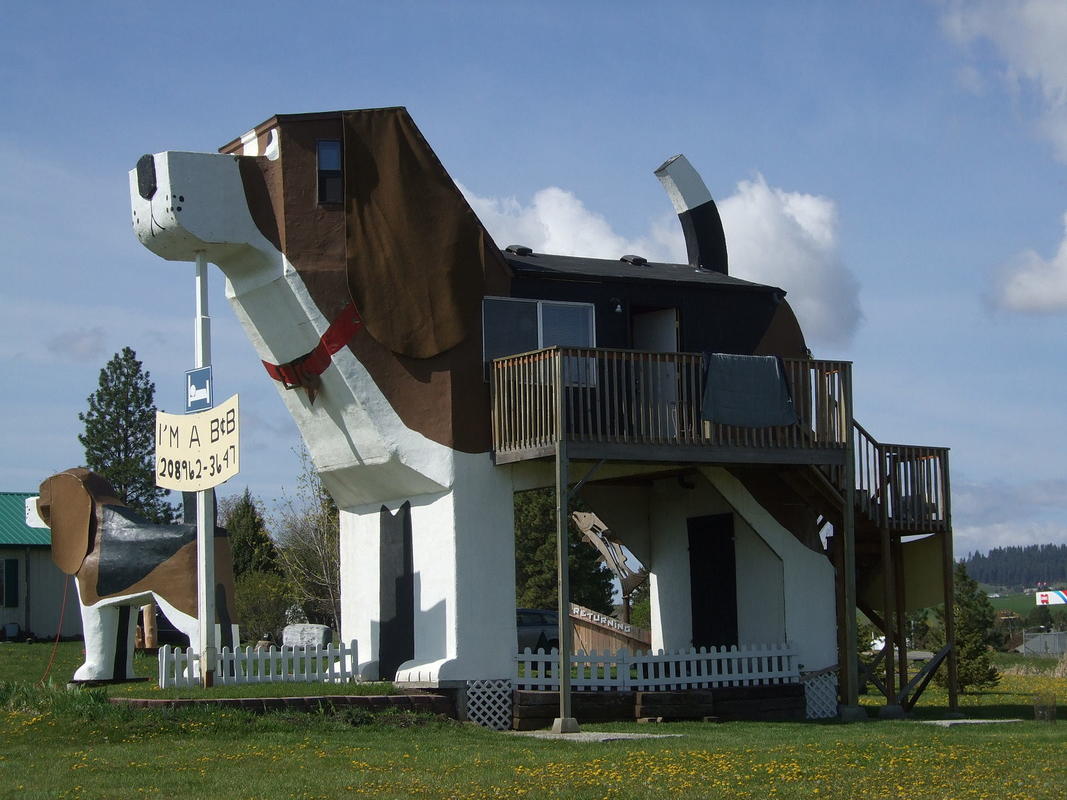 This bizarre two-bedroom bed and breakfast shaped like a beagle is affectionately referred to as Sweet Willy. Located along Highway 95 in northern Idaho as a stop for dog lovers and weary travelers, Sweet Willy was built in 2003 by husband and wife, Dennis Sullivan and Frances Conklin, as a way to promote their craftsmanship. Besides lodging, the attraction also includes a gift shop of handmade carvings and the opportunity to explore Sullivan and Conklin's studio of chainsaw artwork. 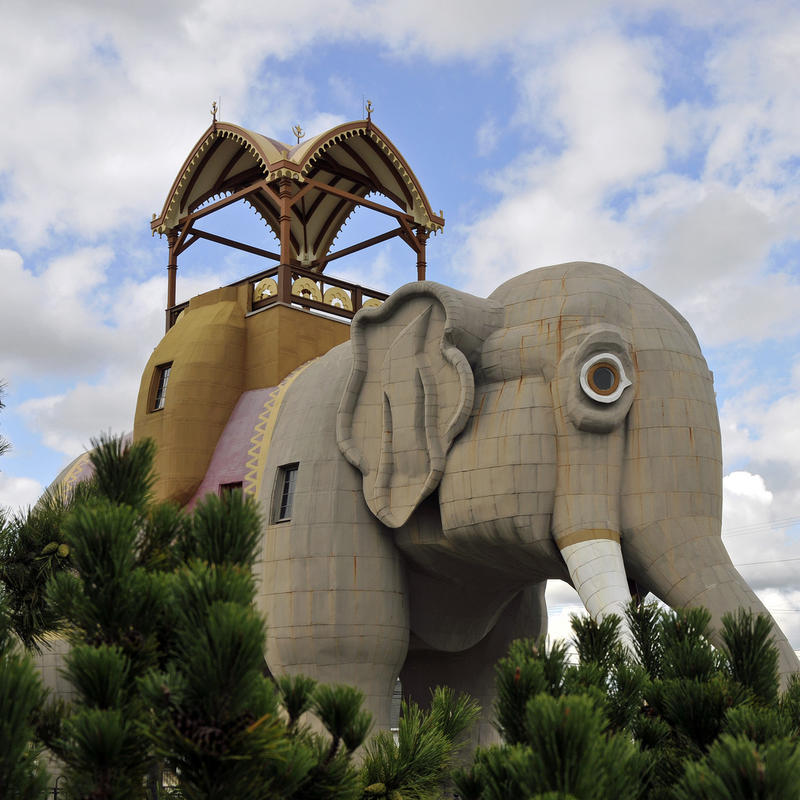 The tallest elephant in New Jersey, Lucy has gone through quite the journey since she was erected in 1881. Originally built by James Lafferty as a ploy to help real estate, Lucy was eventually sold, with stints as a cottage, office, restaurant, and tavern. In 1969 the quirky building was set to be demolished until a group of Margate citizens formed the "Save Lucy Committee." Moved west 100 yards and refurbished in 1970, by 1976, it was designated a National Historic Landmark. Visitors of Lucy can embrace the adventure of climbing the spiral staircase to the top of the howdah where you'll be rewarded with stunning views of the Atlantic Ocean and Atlantic City skyline. 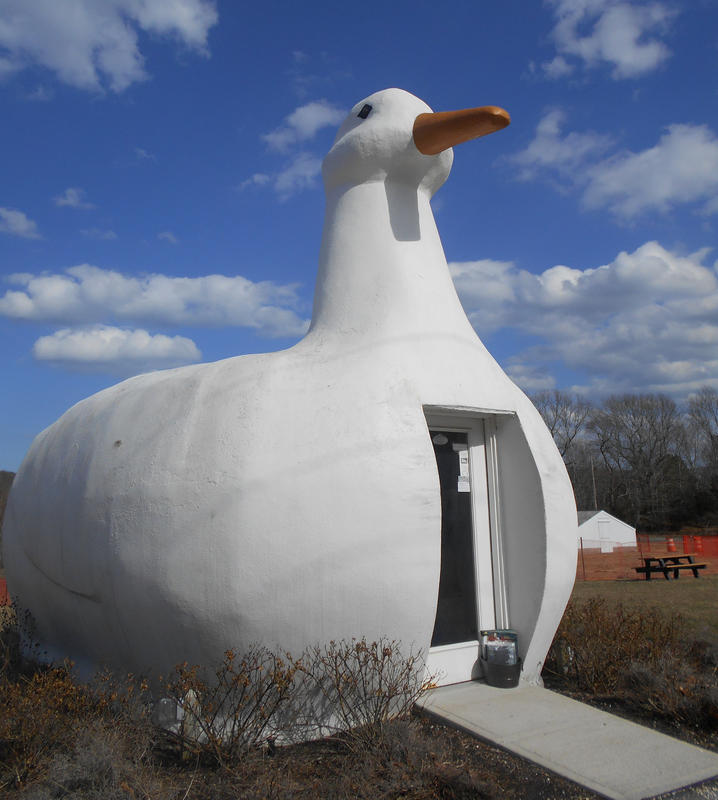 Believe it or not, this duck shaped dwelling was built for the purpose of selling ducks and eggs. Erected in 1931 by a duck farmer named Martin Maurer, the building traveled all over Long Island following the demand for duck farms. It finally settled in Flanders as a tourist attraction, selling duck themed souvenirs and acting as an informational center. In 1997, it was added to the National Register of Historic Places. The classic example of a quirky roadside attraction, it's influence has been so great that any odd-shaped building with symbolic meaning is often referred to simply as a "duck." 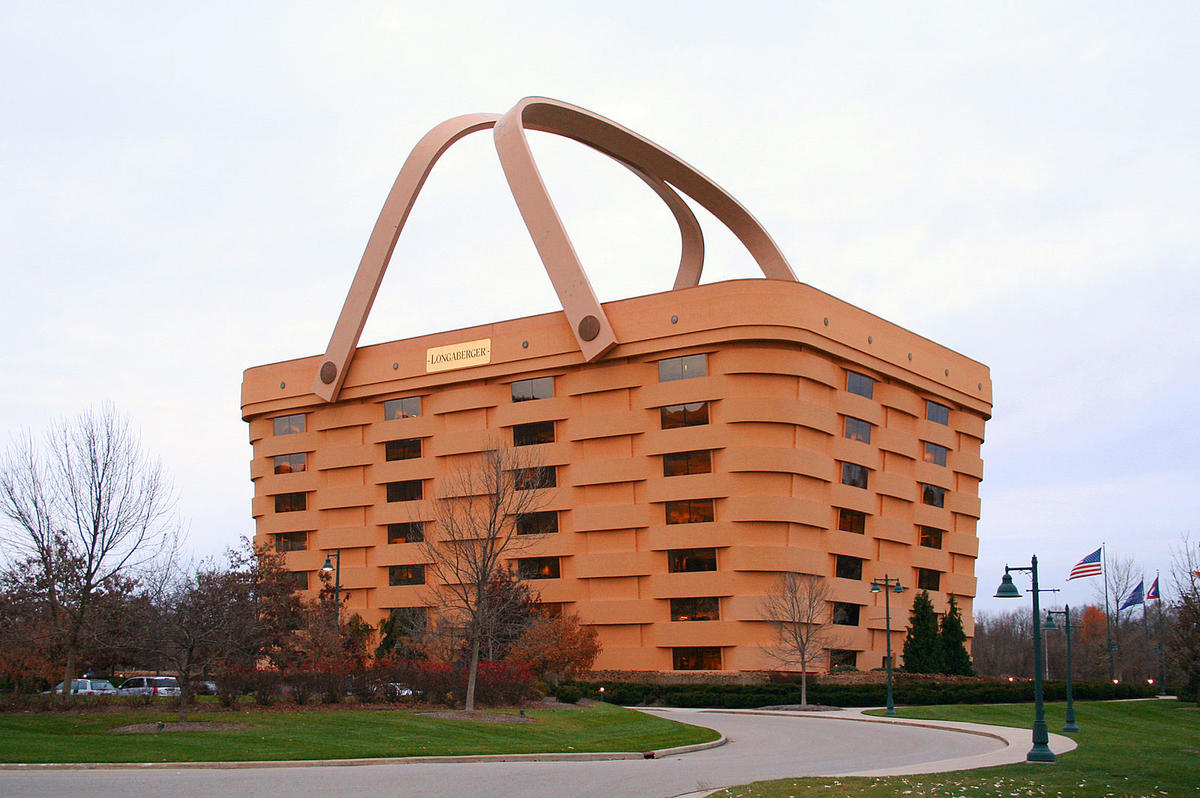 In case you couldn't tell, the Longaberger Company makes and distributes baskets. A seven-story building that opened in 1997, it is roughly 180,000 square feet tall and is designed in the style of the company's best-seller, the Longaberger Medium Market Basket. Located along Route 14 in Newark, Ohio, the Homestead offers visitors shopping, dining, and the opportunity to weave your own souviner basket. 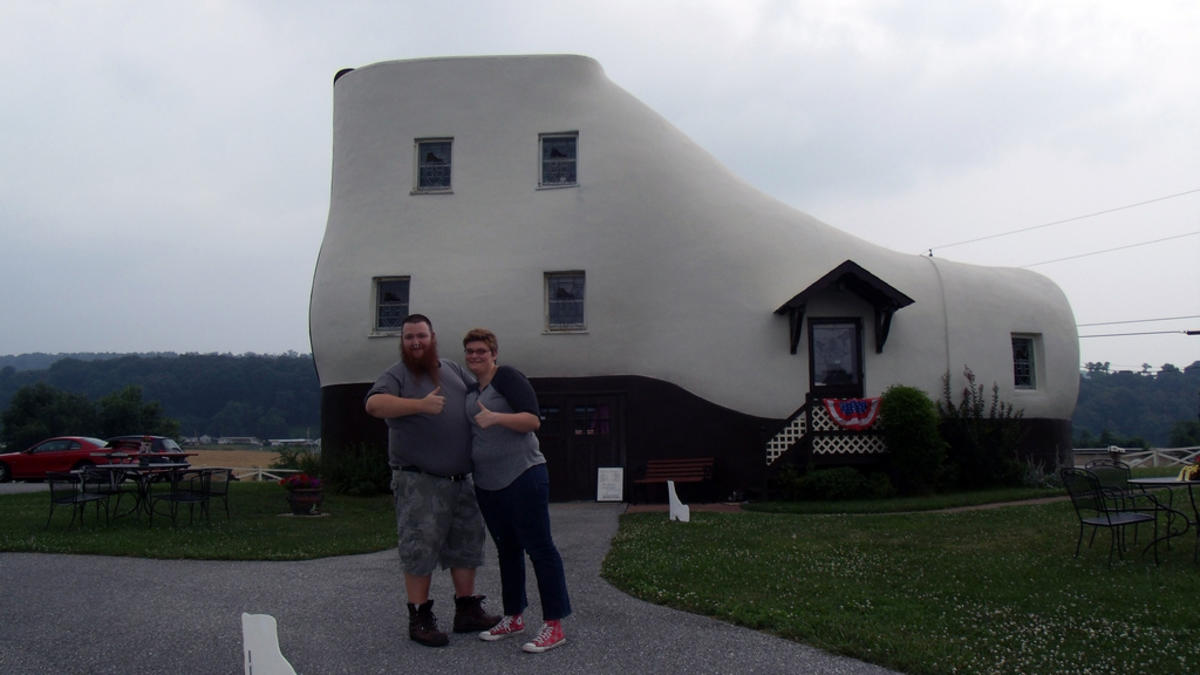 You may have heard the nursery rhyme, "there was an old woman who lived in a shoe," but they weren't talking about this shoe. These residents are a youthful and happy couple. Jeff and Melanie Schmuck bought the novelty Pennsylvania house in 2015, abiding by the traditions of the previous owners by offering guided tours and selling ice cream on Shoe House Road. 25-feet tall, the home was originally built in 1948 by shoemaker Mahlon Haines. He lived there for awhile, but also rented the shoe out to couples looking for a unique property. The renters received high quality service from the maid and a butler and would leave with a new pair of shoes. 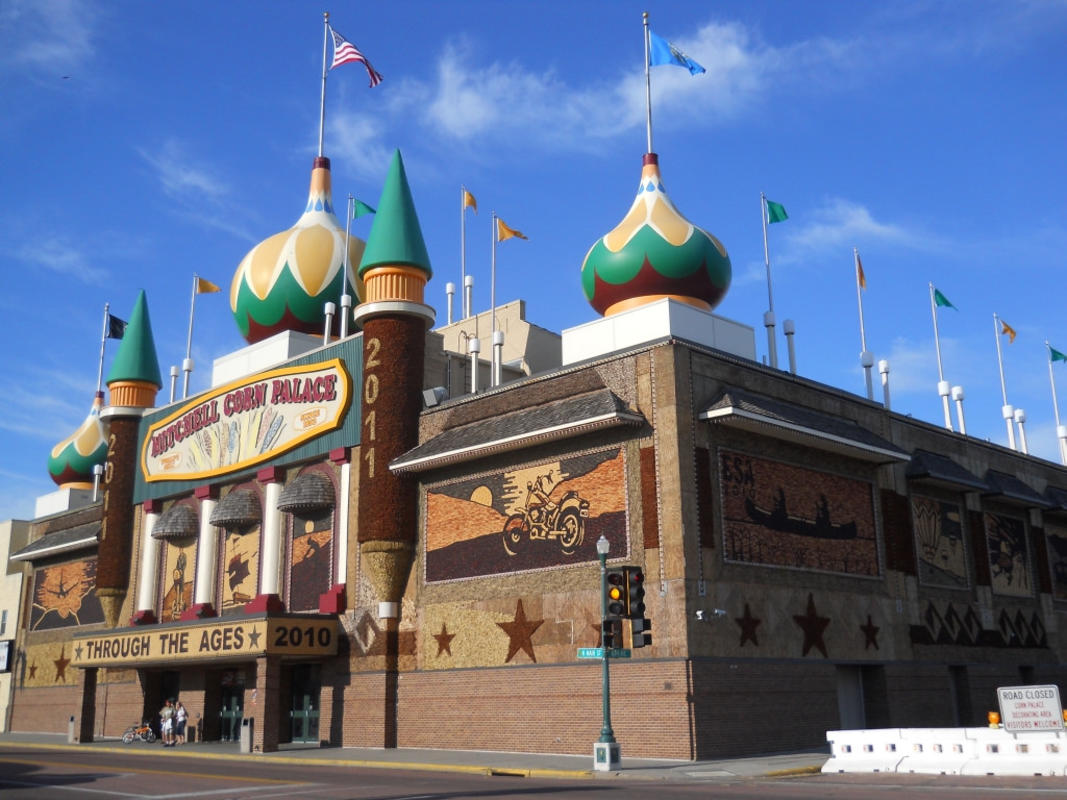 Established in 1892 as a way to celebrate corn and the prosperity of the soil, the Mitchell Corn Palace is the pride of South Dakota. Completely recreated each year, the Corn Palace undergoes a design transformation to display a different mural from a celebrated local artist. Each August, the current mural is stripped from the walls with the new artwork unveiled on October 1. The Mitchell Corn Palace draws about 500,000 visitors a year. Inside the building is an auditorium that attracts big name acts like Styx, as well as local festivals, performances, basketball games, proms, and exhibitions. 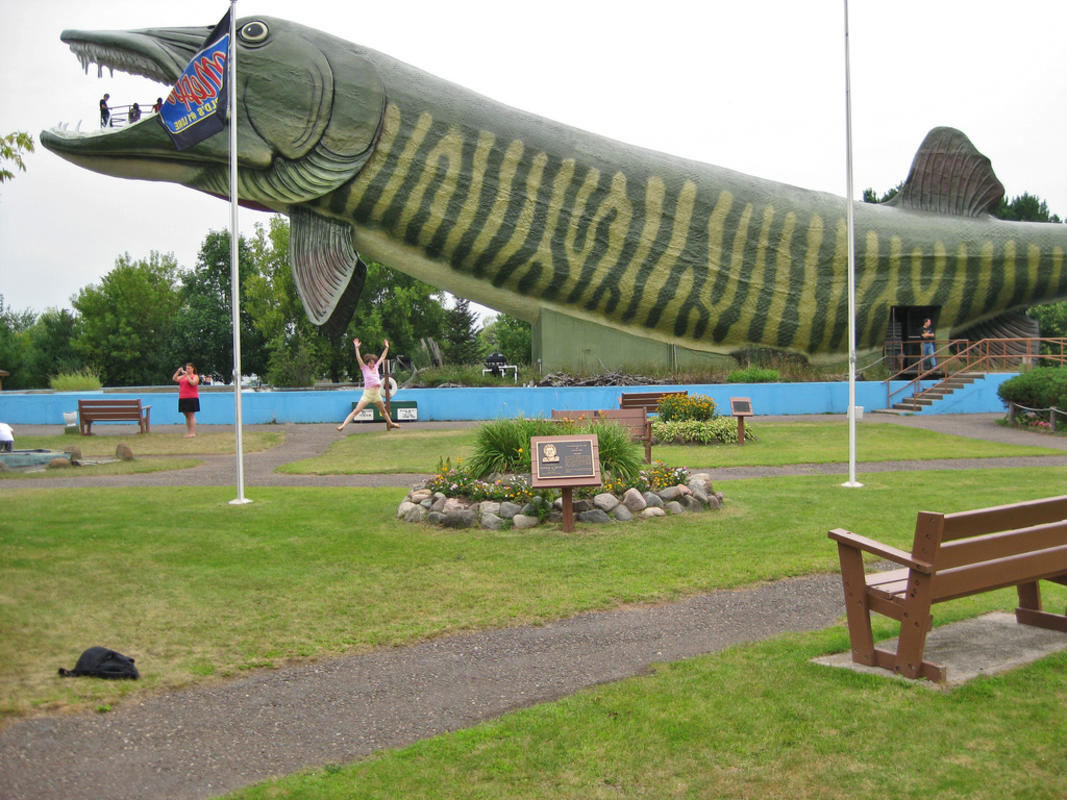 It is hard to find a better representation of fishing in Wisconsin than their very own muskie. Standing over four stories tall and extending over half a city block, visitors are invited to step inside the mouth of the giant fish — which could hold a school bus. Designed to hold 20 people, you'll see views of Lake Hayward and the rest of the museum grounds. The Fresh Water Fishing Hall of Fame is filled with thousands of angling artifacts that include motors, mounted fish, rods, and reels.