The Best Places to Fly Fish Around the World

Gently grip the cork handle of your rod as you cast and recast, aiming your flies with as much accuracy as you can muster. Surrounding you, great mountains reach up like jagged teeth, blanketed in thick forests that hug the banks of the water you stand upon. The peace is tangible. The serenity, infallible. Few sports can weave you into the fabric of a natural scene as much as fly-fishing. You won't learn a better respect for the great outdoors than casting your line on the moving waters of a living river.

Fly fishing is, for the most part, a catch and release game between two species - the human trying to fool the fish, and the marine life trying cleverly not to get duped. It’s a game we’ve been playing since fly rods were invented hundreds of years ago, and it is a game that can be played almost anywhere there's a waterway. But we've identified the best spots on the planet to cast a line, places that combine gorgeous views and water teeming with fish to tempt and tease you. 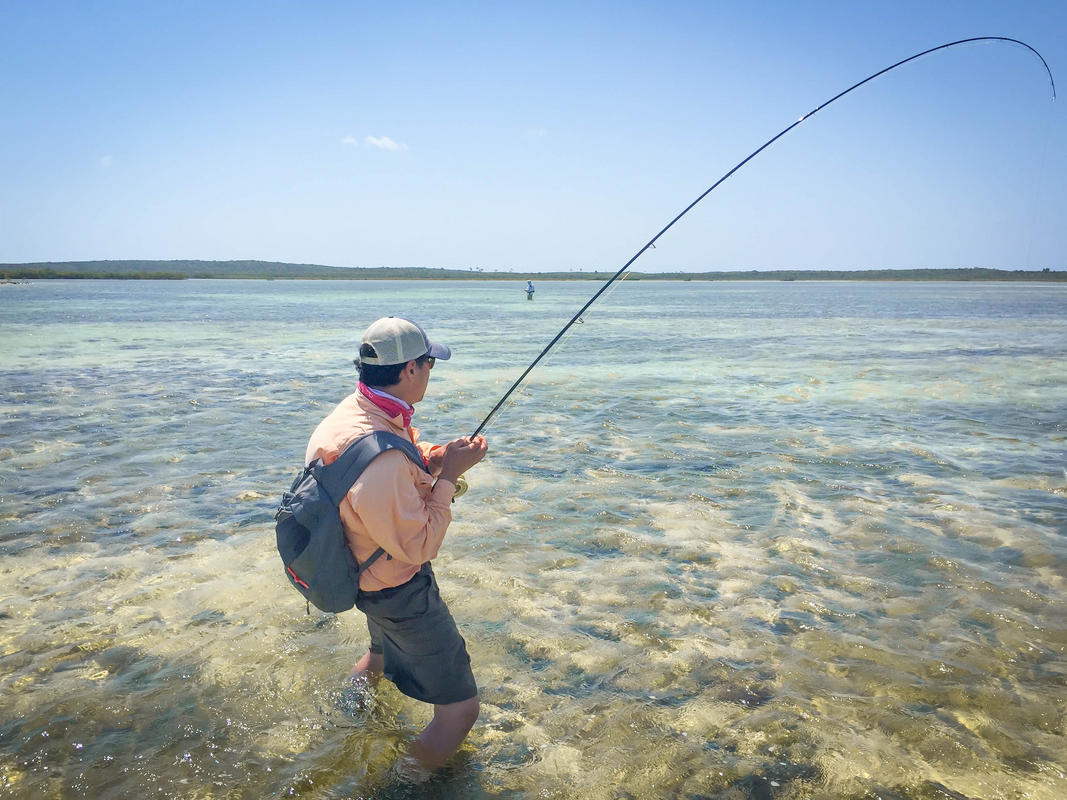 The northern part of the Bahamas is known for its excellent tailings for bonefish. A complex of flats, mangroves and creeks, fishermen flock to the western side of Great Abaco for a warm, tropical, seaside fly fishing vacation. Stay at one of the local lodges like Abaco Lodge to remain close to the action, and hire a guide to tap into some local knowledge. It's a great place to unwind - and the sunsets are hard to beat. 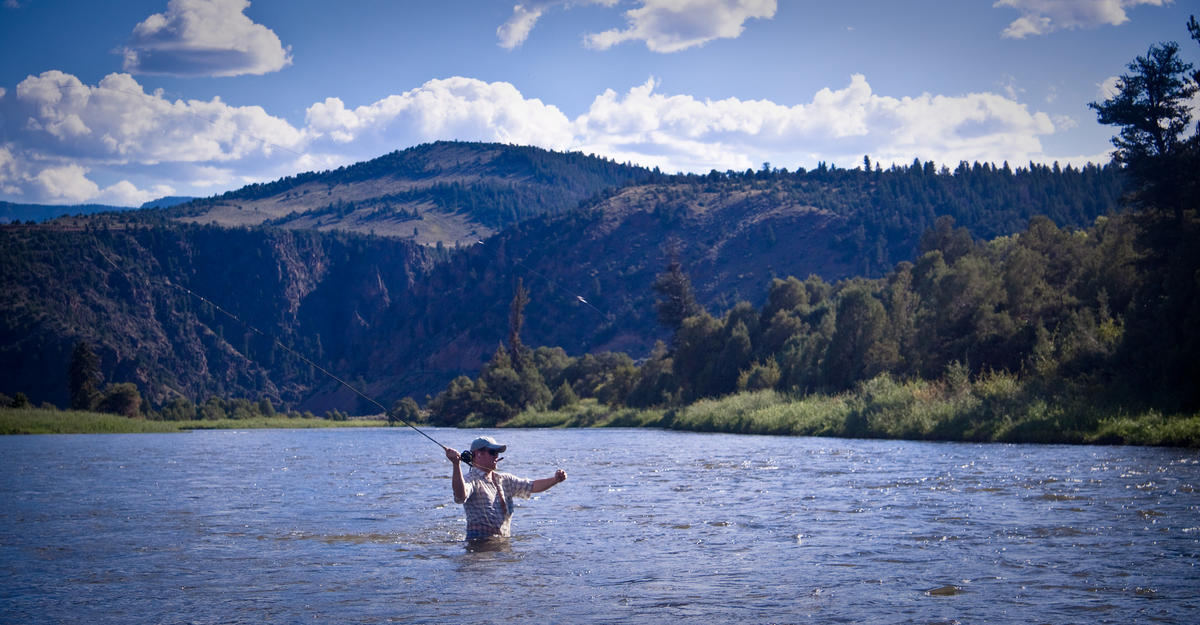 Relatively unknown across the United States (and definitely abroad), the Eagle River in Eagle Valley, Colorado is one of the Rocky Mountain’s premier places for fly fishing. The snowmelt flows high May through September, but even in the winter months the fish strike hard and regularly - as long as you’re willing to brave the icy conditions.

Located a few hours west of Denver, the Eagle River wends its way through Minturn, past Vail, Avon, Edwards, and Gypsum, joining up with the Colorado River before Glenwood Canyon. All along its banks fly fishermen play catch and release with big ol’ brown trout and rainbows, like picking fruit from a tree. This river is one of Colorado’s richest and most lively, and the alpine scenery that surrounds the area offers unparalleled beauty. 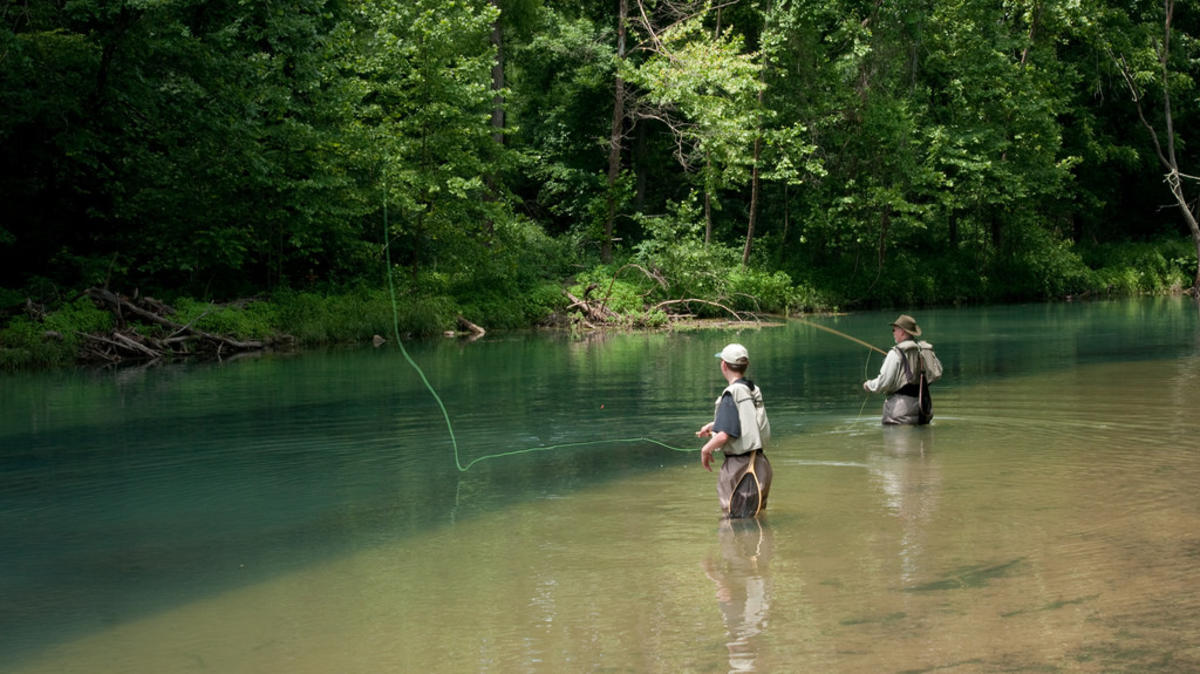 You may be surprised to learn that Montauk on Long Island boasts some of the best fly fishing in the state. Just a few hours from New York City, it goes to show that one doesn’t have to trek hours into uncharted wilderness just to find a good fishing hole.

Areas around Gardiner’s Island and Peconic Bay are particularly popular, rumored to be full of stripers and bluefish. Throughout the spring, summer and fall anglers and guides wade through the shallow flats. But September and October is when Montauk gets really busy, when the world-famous “blitzes” happen, as great schools of baitfish draw armies of striped bass, blues, and albacore churning like you've never seen. 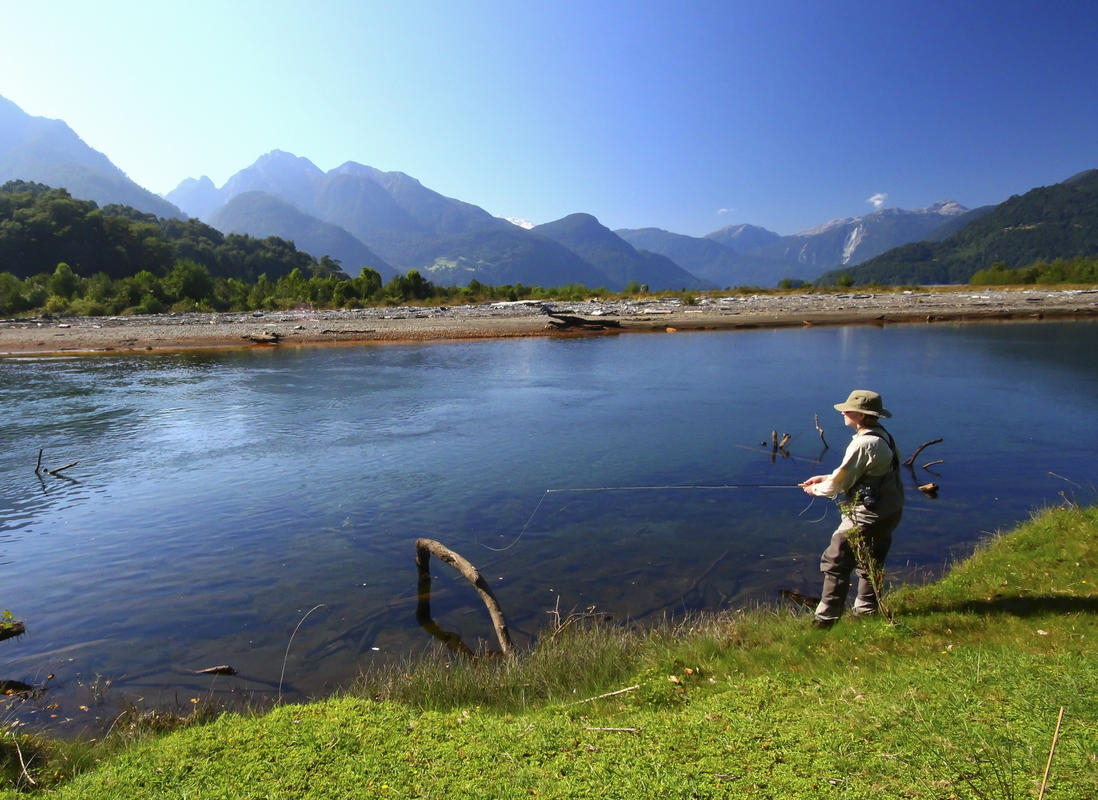 Patagonia is what the American West was like during the time of pioneers and cowboys 100 some years ago - it's wild, unspoiled, remote, and breathtakingly beautiful. The mountains are unlike those found on any other continent and the rolling green hills are enchanting. Fishing in this landscape is like being inside a Bob Ross painting. You'll likely have the rivers all to yourself which is surprising because it's an angler’s mecca. 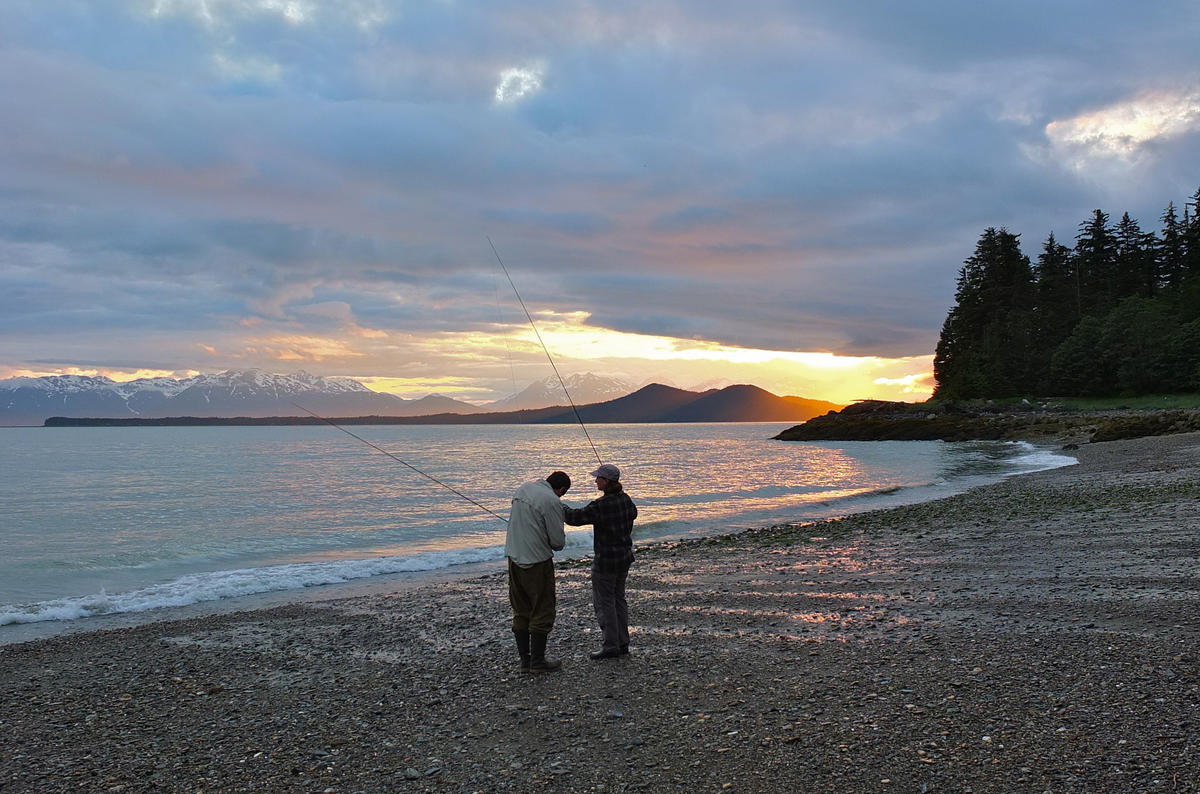 No list about fly fishing would be complete without Alaska. No matter where you go in the great wild frontier you will find lakes, creeks, rivers, streams, ponds, and coast just begging to cast a line. The region is famous for it's annual salmon run where hundreds of thousands of salmon swim upstream to lay their spawn. It creates a feeding frenzy for all types of fishermen -- humans, bears, and eagles -- and isn’t unheard of for people to catch up to 50 salmon in a single day.

Alaska is well known for it's bountiful fishing, but that doesn’t affect the quality. The state is so big that other anglers don’t really ever get in your way. But if you do stumble across some friendly faces, chat them up to learn which flies are working and which aren’t getting hit. The scenery in Alaska is hard to beat, the only thing that can make that better is actually catching a fish! 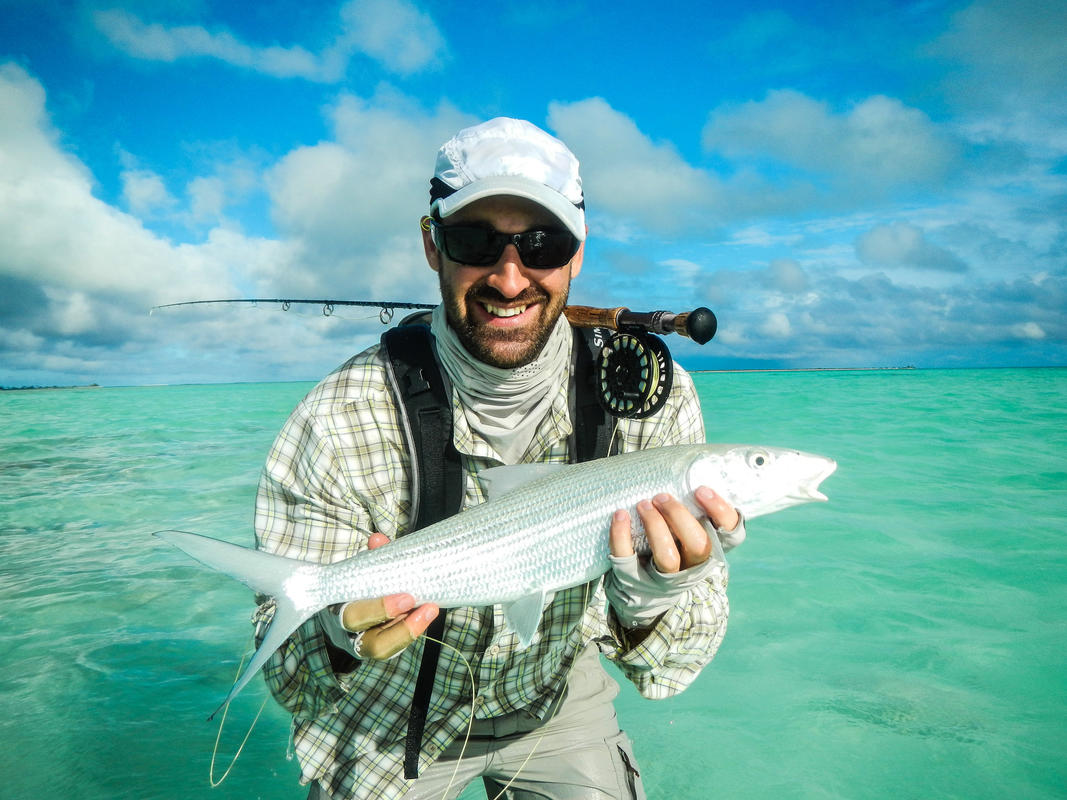 Only a few degrees above the equator, this tropical Pacific island is surrounded by knee deep saltwater flats that are spectacular for fly fishing. Despite bouts of rain in the spring, the weather is incredible year-round, flanked by beaches that are glaringly white with clear, warm waters. And the best part is only 18 fishermen are allowed to visit the island each day.

Full of bonefish ripe for the catching, the area is known as a “legendary quarry for fly fishermen.” But be careful - black tip sharks like hunting for these ghostly fish too, and they have been known to steal the catch right off lines.
YOU MIGHT ALSO LIKE