Our planet has a curious talent for providing sights, sounds and smells that both surprise and delight. If your explorations have taken you scrambling up an Italian hillside for the best view of the ocean, through a chaotic city to your favorite historical landmark or down a quiet cobblestone path to the nearest French bakery, you're certainly not alone in your desire to experience the new and extraordinary. However, there are some places so vast and so breathtaking they're impossible to fully experience from the ground. For your next expedition, consider letting an experienced pilot guide you through an aerial adventure like no other.

Because sometimes all you need is a change in perspective.

Etched into the arid coastal plain of Peru, this mysterious monkey is joined by about 900 other enormous figures, which together comprise one of archaeology’s greatest enigmas. Huge geometric figures (geoglyphs) and larger-than-life depictions of plant and animal life (biomorphs) are spread over 190 square miles of South American desert. We can thank ancient Andean tribes for fashioning these rudimentary pictures between 500 B.C. and 500 A.D. They removed the upper crust of reddish iron-oxide pebbles to create artistic outlines from the white soil underneath. An aerial view is an absolute must to fully appreciate the incredible amount of time and skill it took the architects to craft them.

Trying to depict the pictures could occupy you for hours, but it’s the history behind their creation that’s riveted the outside world for decades. Theories from all corners of the globe posit that the figures were utilized as a way to get the attention of the rain gods . . . no, as a massive astronomical calendar . . . no, as huge running tracks for religious ceremonies . . . no, most definitely as an extraterrestrial airport . . . . You decide what you think is most plausible. While you're doing that, we're going to kick back and enjoy the views from above. 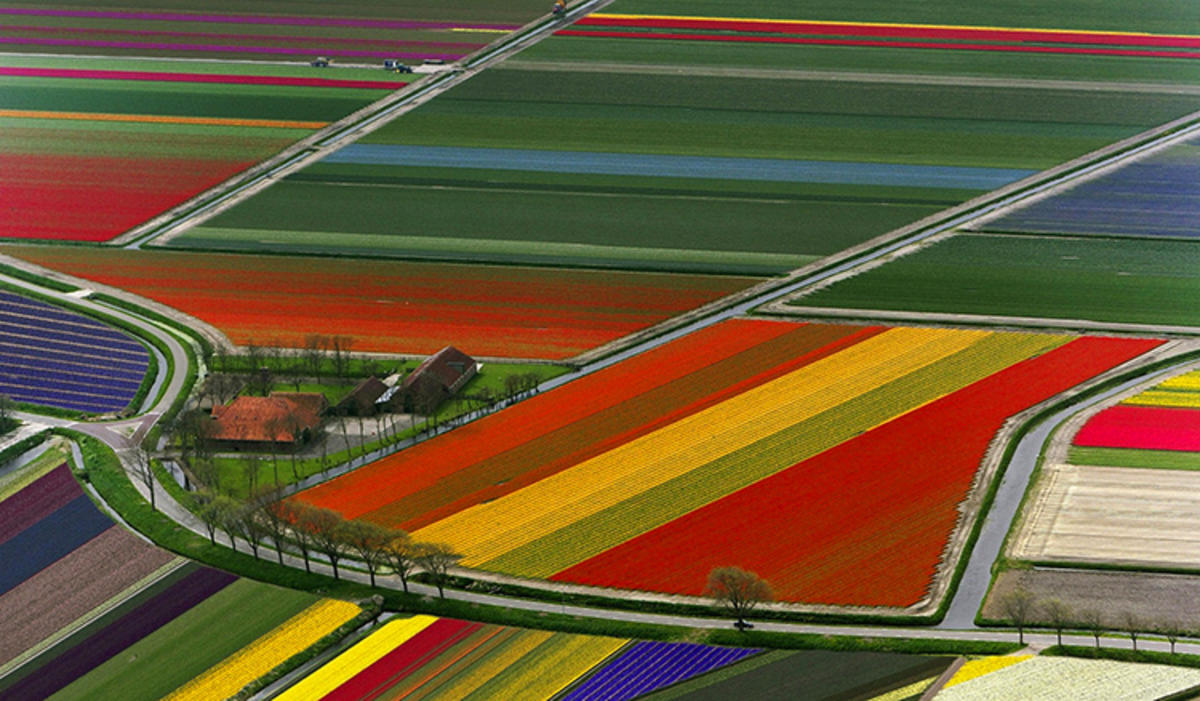 The Dutch have grown quite used to tourists flying into the country simply to ogle at their flower fields. During the 8-week blooming season, an average of 800,000 visitors flood through places like the Keukenhof Gardens in order to stroll or bike through one of the world’s most impressive display of tulips.

Smelling the fragrant flowers up close is one thing, but if you take to the air with a company like Fly Over Holland, the crowds will be far less (only a few fit into a small plane, after all) and the scenery far more unique. You may find the ground below reminds you of a box of Crayola crayons more than anything else as you journey over long strips of flower fields that display every color of the rainbow, plus dozens more.

Tucked into the far southeastern corner of Alaska, Wrangell St. Elias National Park is bigger than the entire country of Switzerland and is one of the least explored national parks in America. Its insanely large size, the limited number of traversable trails and the fact that Alaska has 16 times the number of planes as the national average all contribute to why flying is a better way to explore than walking. Beyond that, you're guaranteed breathtaking views of blue-tinged glaciers, braided rivers and snow-encrusted mountains.

While there are several excellent companies in the area like Wrangell Mountain Air and St. Elias Alpine Guides, if you’re looking for a truly phenomenal experience, don’t miss out on an Ultima Thule flight. This family-owned and run operation is located in a remote part of the already remote park. Several decades ago, they perfected the art of landing bush planes on ice glaciers which means they can take you pretty much anywhere. Not only are they experts in taking off and landing sans airstrips, their lodge offers the the kind of amenities you’d be hard-pressed to find anywhere else in the wilderness. Spend your day soaring above the peaks and come home to a cozy cabin with a warm dinner of Alaskan game and fish, homegrown veggies and fresh baked bread waiting. 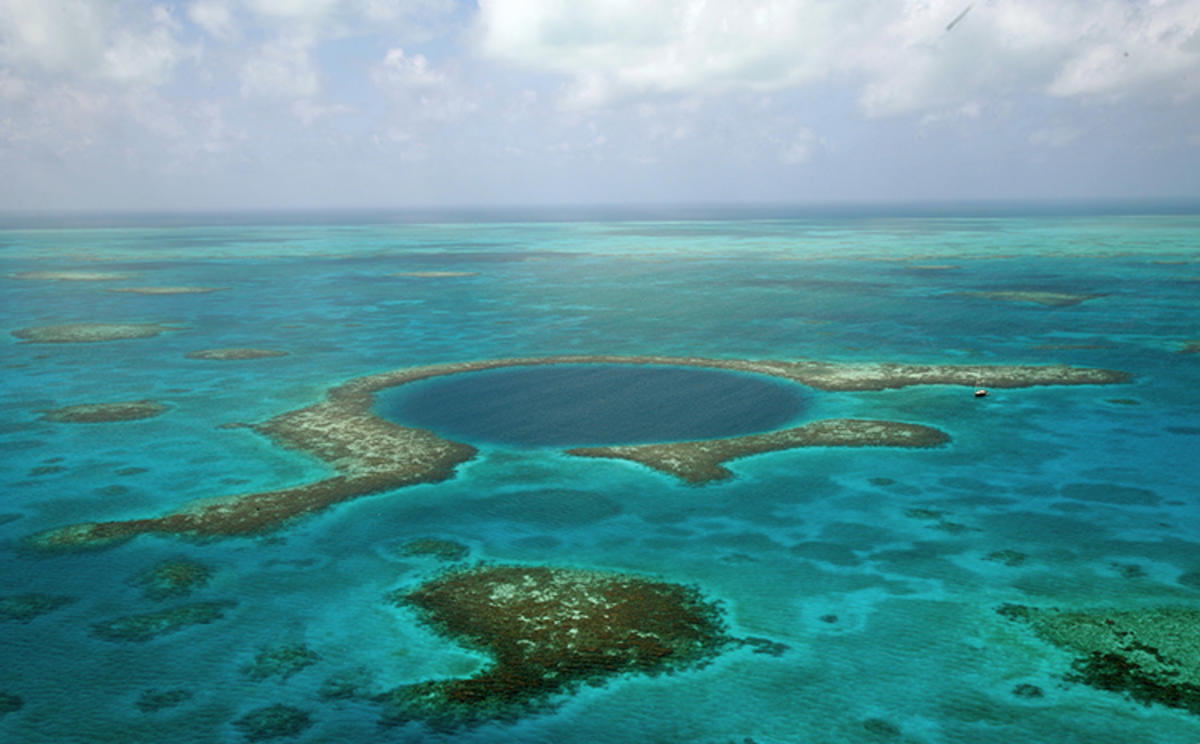 The party responsible for naming the blue hole off the coast of Belize doesn’t get points for creativity, however, that doesn’t seem to matter as this destination is a bucket list item for scuba divers all over the planet. The crystal clear water, the delicate coral and an abundance of sharks below the surface hold plenty of attraction, but part of the remote island's beauty is lost unless you see it from above. The sinkhole’s penetratingly blue water surrounded by a shallow coral fringe is absolutely transfixing. 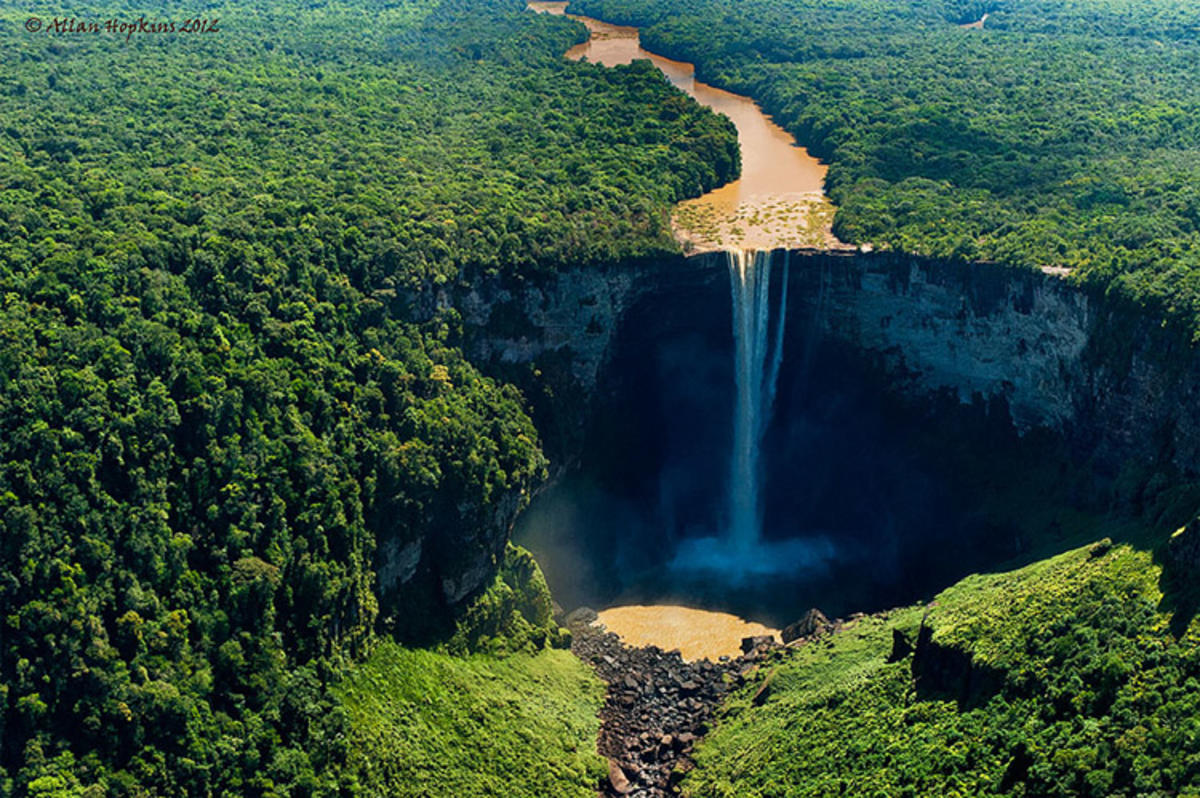 There is certainly much to appreciate about a close-up look at jungle life. Particularly in the Amazon, which is home to millions of animal, plant and insect species. For a different perspective, however, take the opportunity to view the "lungs of the world" from the sky. Thousands upon thousands of miles of lush green rainforest is punctuated by the Amazon River and dozens of tributaries and waterfalls -- it's a a sight you simply can't miss.

The trip may also be educational for those interested in the environmental impact of deforestation. Nothing brings the issue into the forefront more than the visible juxtaposition between the healthy greenery and the brownish-gray areas where the vegetation has been hacked away or burned down. 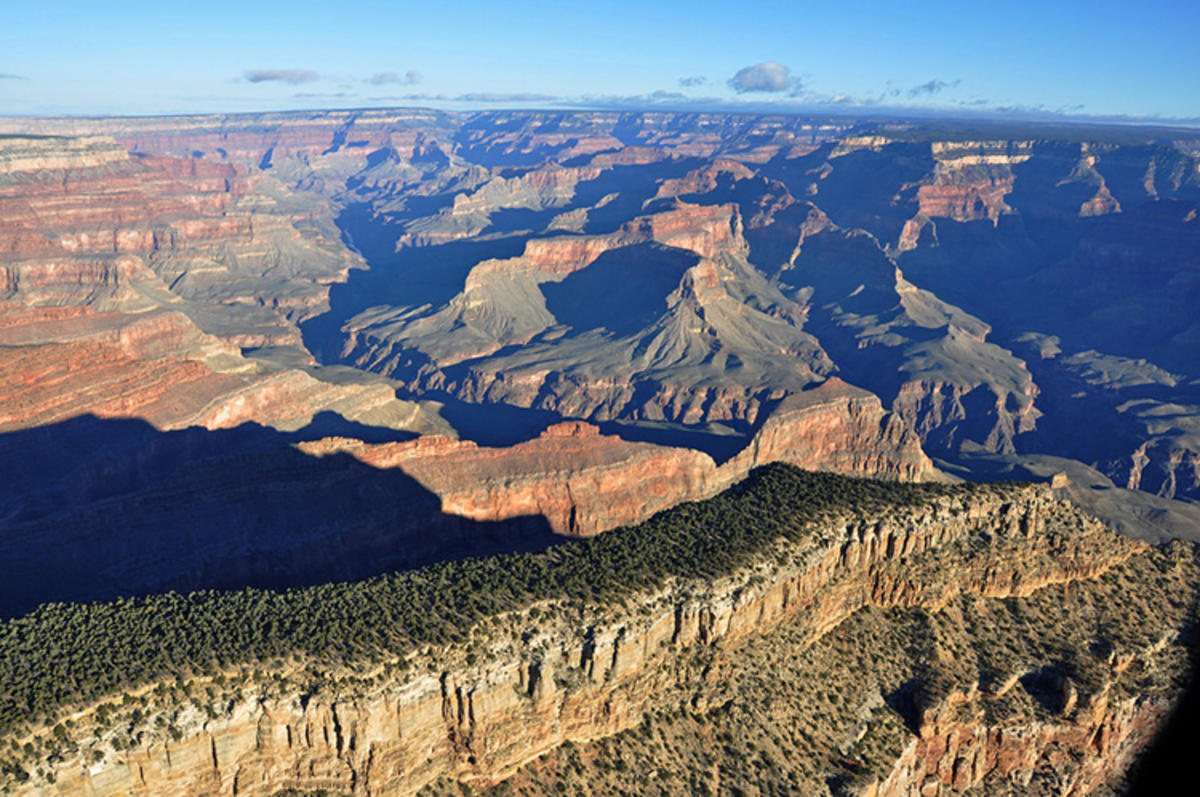 With more than 4 million visitors a year, the Grand Canyon gets more than its fair share of tourists. Some come for an afternoon of hiking, to gaze over the rim into the deep pit below. Others are weighed down with gear, ready for a multi-day backpacking trip deep into its bowels. While any trip to the Grand Canyon is worthwhile, there's no way to fully appreciate the 1,900 square miles of rugged beauty without a quick flight over the red dusty trails through Grand Canyon Scenic Airlines. Hop aboard one of their flights to stare down in awe at the towering buttes, soaring pinnacles and wonder just how long it would take to explore the entire thing on foot.

7 Things to Do in Haywood County All Year Long

Do You Dare to Traverse Spain's Most Deadly Hike?