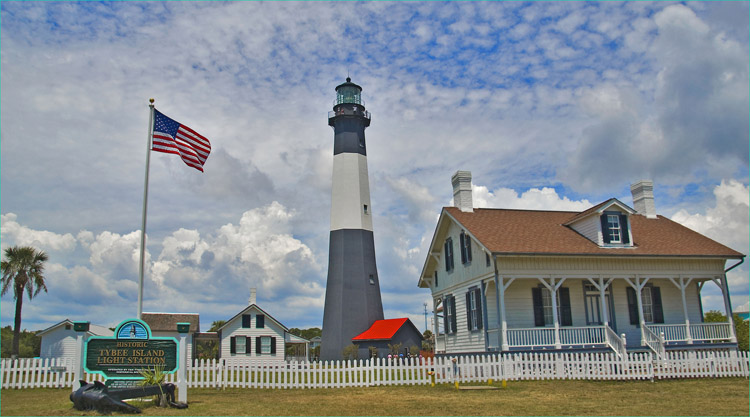 After being named Tybee Island by a Native American tribe called the Euchee, the small spit of land off of the east coast of Georgia was briefly renamed “Los Bajos” by the Spanish colonists who landed there during the early part of the 1520s. During the 1950s, the island’s name was changed to “Savannah Beach” in an effort to attract more tourists. Despite all of those name changes, the island reverted back to its original Euchee name. Today, Tybee Island is a popular resort spot for people from the Savannah area and beyond. Situated at the mouth of the Savannah River, Tybee Island is a welcoming place with plenty of unique and charming attractions to keep visitors of all kinds happy.

Although Tybee Island has exploded in popularity as a tourist mecca in recent years, it still manages to retain many of its quaint charms. Visitors are usually so impressed with what they find that they end up returning again and again. When visiting, check out a few of these less-well-known attractions:

Due to its strategic location at the mouth of the Savannah River, Tybee Island is home to a couple of lighthouses. The Tybee Island Light Station – which is the oldest lighthouse in Georgia – is also home to the Tybee Island Lighthouse Museum. This is a wonderful place to learn a little bit more about the unique character and history of this remarkable island – and to whet your appetite for all lighthouse-related pursuits.

Little Tybee Island sits just to the south of Tybee Island proper. This undeveloped island is a prime place to enjoy some unforgettable camping. As a nature preserve that is owned and operated by the state of Georgia, Little Tybee Island is one of the few places left in this part of the country that is truly pristine and untouched.

Every town has a central gathering place; on Tybee Island, it’s the Tybee Pier and Pavilion. Whether you want to stroll around looking at the sea, or would like to do a bit of people watching, this is probably the best place on the island to do so. Try stopping by near sunset for some exceptional views.

Learning a bit more about a region can help you enjoy the time you spend there that much more. Swing by the Tybee Island Museum at Fort Screven – a restored coastal defense fort – to learn more about the long, proud naval history of this part of the United States.

While there are plenty of attractions that will appeal to a broad section of the population, Tybee Island also has a respectable number of family- and couple-oriented attractions as well. If you’re bringing the kids along – or traveling as a pair – consider one of these options:

Birdwatching At The North Beach

Birdwatching is a wonderfully relaxing pastime, and it’s especially fun when you do it together as a couple. Tybee Island is a veritable haven for an astonishing number of different bird species; the best place to check them out for yourselves is along the island’s north beach. Whether you go during the spring, summer, fall or winter – and whether it’s morning, noon or near dusk – you’ll be able to spot a plethora of unique birds.

Finding ways to keep the kids occupied without boring them silly can be a challenge. Fortunately, the Tybee Island Marine Science Center is available. There, kids will be able to learn more about the wildlife of the area through interesting and interactive exhibits; the grownups are bound to learn a little something, too!

If you and your special someone enjoy the great outdoors and being active, sea kayaking is a wonderful choice. There are several companies on Tybee Island that offer sea kayaking excursions, and the unspoiled nature of the island lends itself well to such pursuits.

An intriguing mix of southern style food and seafood accounts for the majority of the dining options on Tybee Island. On the one hand, you can easily find restaurants dishing up collard greens, stewed okra and fried chicken; on the other, you can sit down to a delightful seafood feast at many others. While on Tybee Island, the best way to get a feel for the conflicting influences on this particular place is by sampling a little bit of both delectable options, so hit the pavement and be adventurous!

Tybee Island is accessible only via US-80, and most people who are visiting from far afield fly into the Savannah/Hilton Head International Airport and make the fifty-mile drive over to Tybee. All told, it is an easy enough jaunt from the Savannah area to Tybee – and the drive is especially scenic.

Summers can be extremely hot and exceptionally humid on Tybee Island. If you’re not a fan of the sweltering heat – and if you don’t plan on hitting the beach that much, anyway – springtime is the best time to explore the island. The air is reasonably warm but lacks the humid, wet edge that permeates it so much during the summer months.

Hollywood of the South: 7 Famous Movies Filmed in Georgia

Wildlife Encounters: Walk on the Wild Side