In these straightened times you may be forgiven for thinking renowned equine artist and cartoonist Tod Ramos and his wife, muralist and chef extraordinaire, Kate Lovegrove, were slightly bonkers setting up a new money-making venture in the south of France. They have been established on the international art scene for years; Tod was once an amateur jockey in the UK and his passion for horses has led him to produce a glorious portfolio of equine work. Kate herself has decorated the walls of many a London hotel and restaurant as well as buildings as far away as Japan and Azerbaijhan with her own brand of trompe l'oeil painting and is currently working on a project in Spitalfields Market, London. 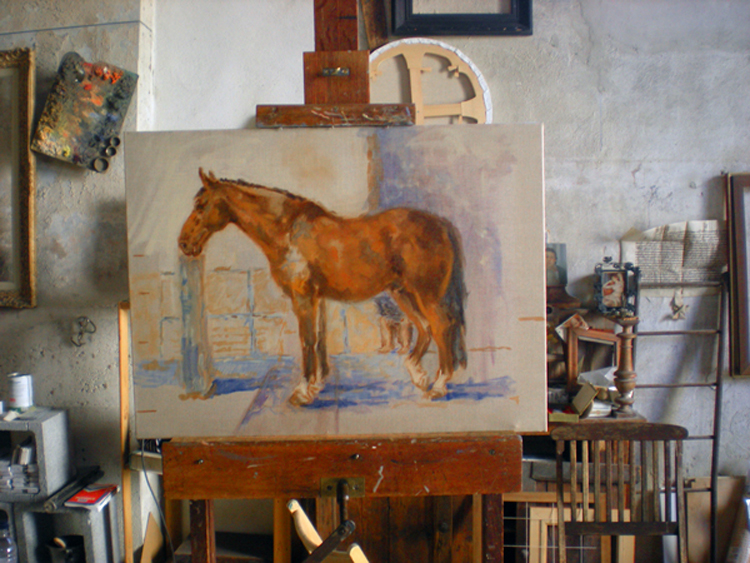 So why now? Surely all those English émigrées are moving back home from rural France? And surely the days of disposable income have vanished? But you'd be wrong. The pull of Tod's skill and experience as an art teacher combined with amazing (and seemingly endless) menus concocted by Kate saw their first art course, Academy Studios Abroad in Languedoc a resounding success.

Kate and Tod have set up shop in a former winemaker's house deep in the heart of rural southern France yet easily reached thanks to the UK's cut-price airlines. Their studios and student accommodation are set in the barns, wine presses and caves of their carefully restored maison de maître - master's house - in the backwater village of Aubais.

Although he teaches intensive 11-week residential courses aimed at students filling portfolios for art school admission, Tod's short courses are designed to entertain and teach all comers - whether ham-fisted with a brush or sneakily skilled. Academy Studios Abroad opened in early September with an introductory five-day master class in equestrian painting.

The students all have a base in painting; Tom Evetts studies in Florence and is possibly the world's tallest amateur jockey, with an equal passion for horses and painting. Michelle McCullagh is a great horsewoman and well-established professional horse painter who wants to hone her skills, Do Burgess is a potter and water-colorist, and Benoit Bay a talented French artist who admired and wanted to learn Tod's techniques.

The first morning of the course sees the arrival of Florian, a splendid bay with four white feet. He's not so sure about his surroundings at first but soon settles down to the business of being an equine model. Tod starts with a discussion of the horse's conformation (figure), anatomy and the techniques of painting a horse. Then Florian and the class move outside and everyone begins to draw. The day is spent drawing, with Tod explaining techniques, making suggestions and generally encouraging the artists along.

The next couple of days follow the same gentle pace, interspersed with glorious lunches and leisurely, late al fresco dinners as the group of artists start to interact with each other. Kate's menus include roasted red peppers stuffed with brandade (local cod, potato and garlic), assiette de fruit de la mer - a vast plate of oysters, clams, whelks, mussels, prawns and crab accompanied by a good white Picpoul, local cheeses, fruit and plum and pecan crumble.

By day four everybody was seeing real improvements in technique and confidence; under Tod's careful tutelage several wonderful oils have been produced.

The traditions of the Camargue wetlands and cattle country are writ large in Aubais; as well as learning to paint horses this week, the artists get to witness first-hand an abrivado, the rounding up of the iconic black bulls by the gardians - French cowboys. An afternoon is spent watching les course Carmarguaise - traditional bullfighting where the object is imply to remove ribbons from the bull's horns, and there's a further excursion to admire the dashing white horses typical of the region.

One day Tod takes the group to Florian's yard to watch owner Sylvie Martin-Pages school his stablemates while the artists make quick studies in pencil and ink of horses in movement and in groups. Lunch is a magnificent picnic under the oaks on Sylvie's beautiful terrace overlooking the ancient village. She serves a perfumed local Viognier with vine tomatoes, pasta salad with avocado, baby tomatoes and basil, salami baguettes, melon and coffee with lemon biscuits and oriellettes (orange-flower perfumed sweet biscuits).

On the last night in Aubais, Tod and his acolytes join villagers in the central square to enjoy a final feast of taureau en broche, an entire local black bull roasted all day over a fire made of vine wood. A convivial ending to a great week of improvement in painting techniques that has also provided an insight into life in rural Languedoc.

Check out the Grand Canyon of Europe

Top 5 Reasons to Stay at a Boutique Hotel