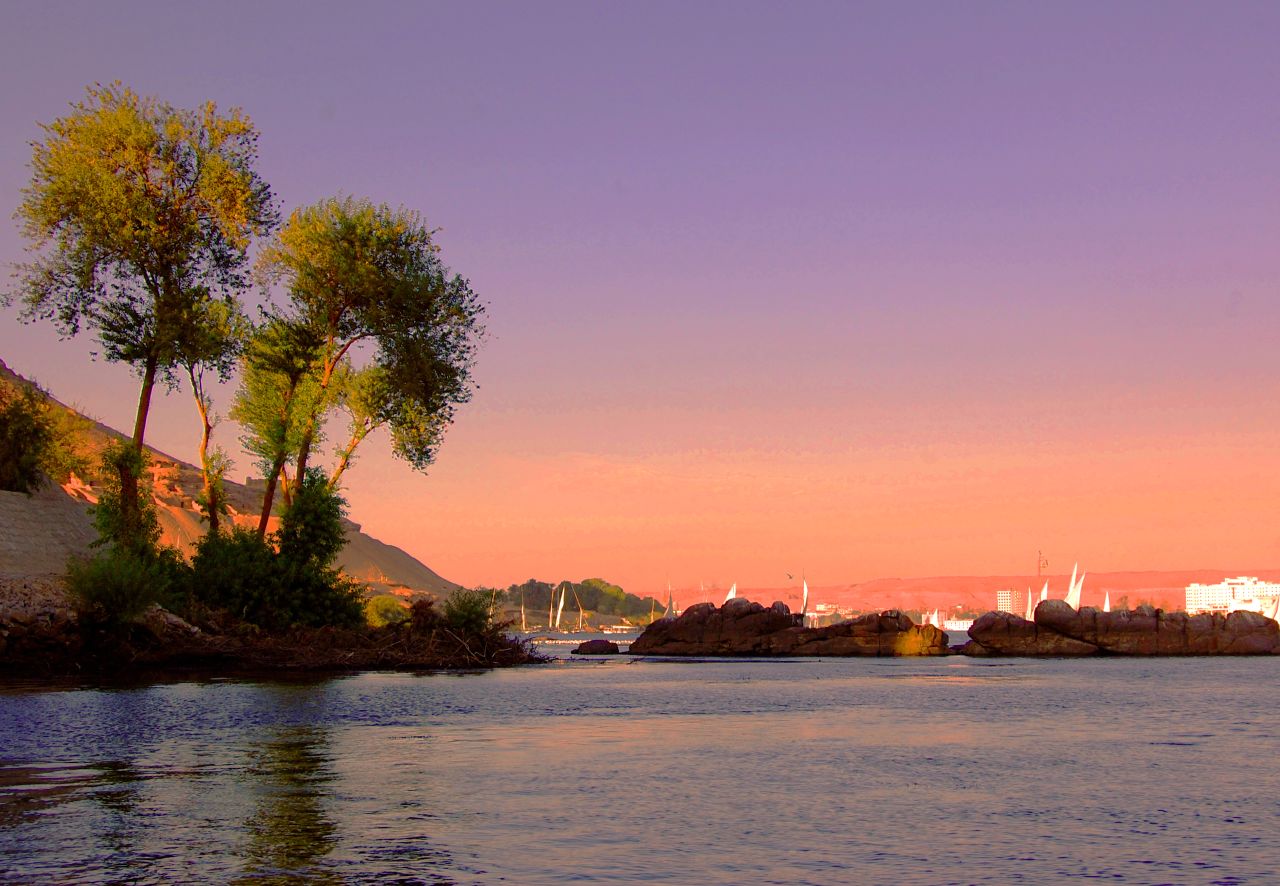 “… Egypt remains predominantly a strange world there pharaohs and gods, sometimes monstrous, sometimes charming, are found in the act of accomplishing strange rites, in the centre of hieroglyphic inscriptions charged with mysterious significance.” Thus spoke Roger Lascelles in his guidebook “Egypt” and these same attributes attract visitors from all over the world.

The Nile is the lifeblood of millions of people as it leaves the highlands of both Ethiopia and Uganda to merge at Khartoum and then flow north to Cairo spanning 6650 kms. long. In fact the Nile basin drains almost 10% of the African continent. Here are some of the must-sees in Egypt as you contemplate this magical kingdom.

The Ibn Tulun Mosque is - non-Muslims - may be as close as you get to experiencing the feel and layout of the Kaaba at Mecca. This baked brick building from 876AD has a minaret built from limestone connected by a stone bridge on the 2nd story. The legend goes that Ibn Tulun called upon his architects to build a minaret that resembled what a string looks like wound around a finger! 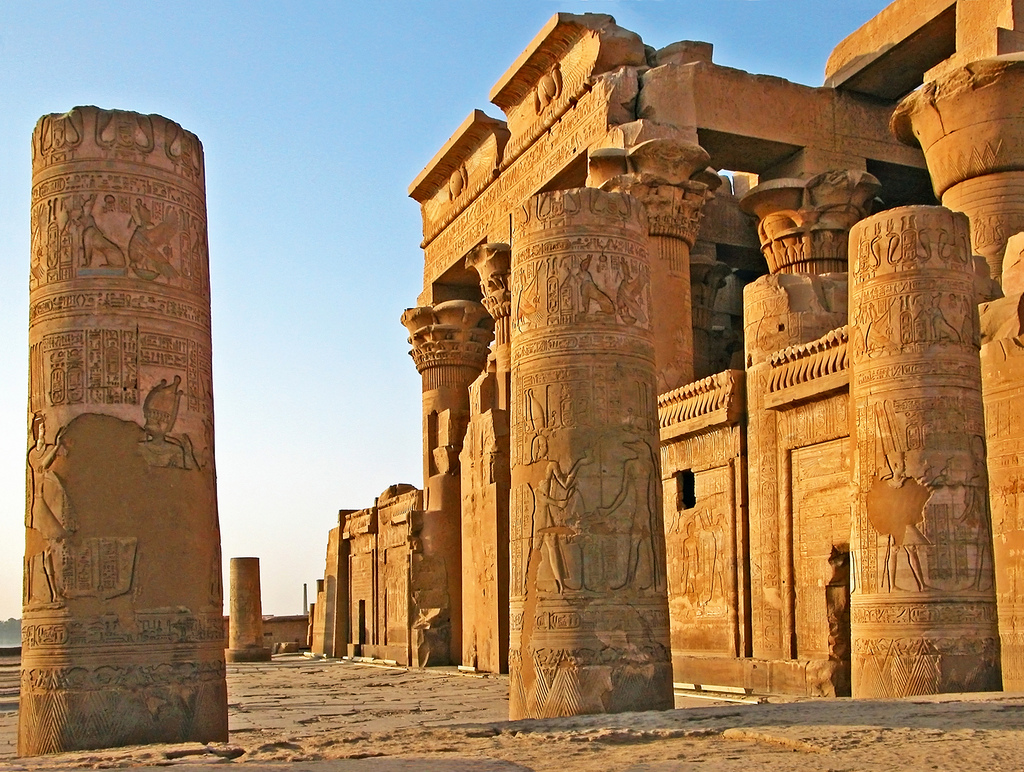 Do you like bazaars? Markets? Bargaining for souvenirs? Khan El Khalili is your place: originally a cemetery, the sultan in 1511 converted the area into stalls and small workshops. Did you know that the Arabic word for market is "souq" or "suq" and that the word ‘bazaar’ is of Persian derivation? Whatever the origin, enjoy the sights, smells, sounds and hustlers in this fantastic capitalistic environment.

Abu Simbel was originally built 3000 years ago. In the 1960’s, the alarmingly fast rising waters of the Nile urged the world to find a solution to save this magnificent structure before the temple was submerged. They took the temple apart in pieces weighing 10 – 20 tons each; moved it 180 meters back from the water; and elevated it by 64 Meters above the original location. How incredible! One phenomenal architectural feature preserved in the new location is the position of the interior statues and hallway. At the two solstices of the sun, the sun’s rays reach the back interior wall 55 meters deep and shine on the reliefs there. Imagine that!

Queen Hatshepsut was quite a character: she married her half brother and when he died, she threw aside her nephew and stepson so she could take her place as Queen! Her temple at Aswan is quite unique in its semicircular shape cut right into the rock edifice. Her descendants erased her name and her statues after her death but it remains known as the Temple of Hapshetsut.

Another strong Egyptian Queen was Hathor – Goddess of Love and Joy. The temple dedicated to her is at Dendera. A unique feature of this temple south of Cairo is the "mammis." Here there are depictions of the birth of her son nursing mothers as well as the god BES - the protector of nursing and birth - carved into the ceiling. There are over 300 manifestations of Hathor carved into this temple! What a woman!

The wooden gongs at the monastery of St. Catherine’s still ring out twice daily. The monks gather to celebrate their joy of living in such a revered historical and religious site for Jews, Moslems and Christians. It was here at the bottom of the Sinai Peninsula that the Jews heard the voice of God. It was here that Christians believe God manifested himself as a burning bush. And it is here that Moslems believe Moses received the tablets known as the Ten Commandments.

The Christians reigned here in Egypt for centuries and left their mark with churches and monasteries. The Coptic area of Cairo is a must-see as well as the monastery of St. Simeon’s near Aswan. A pre-dawn camel ride will take you up the dunes of the Nile’s west bank to this 6th century edifice. You can see evidence here of the mill, wine and oil presses, toilets, kitchens and stables used by the monks for over 700 years.

Karnak Temple was built by Amun whose sacred animal was the ram. Lining the processional avenue to the temple complex are 2 rows of sphinxes, all ram-headed. Quite spectacular an entrance and it just gets better once inside. Light streams in through the ceiling arches and you can still see some of the ancient colors on the reliefs, many paying homage to the divine kingly triad of Mut, Khonsu and Amun himself.

Taking a cruise on the Nile to visit some of these outstanding historical sites is a wish fulfillment for many people. The wind barely blows most days so it is more of a float down the river than actually sailing or motoring. The outline of the felucca has not changed in thousands of years and you can easily imagine its sails shading traders and families plying the ebbs and flows of the longest river in the world.

Is Egypt Safe to Travel?