By Janice Tober
Save

In 2010 Prince released a song about a little-known, multi-terraced, mountain-backed wine region called Lavaux that's about an hour outside Geneva. This UNESCO World Heritage site is full of quaint villages, wealthy winemakers and Michelin-starred restaurants. One of his secret happy places, the region truly is fit for a prince. 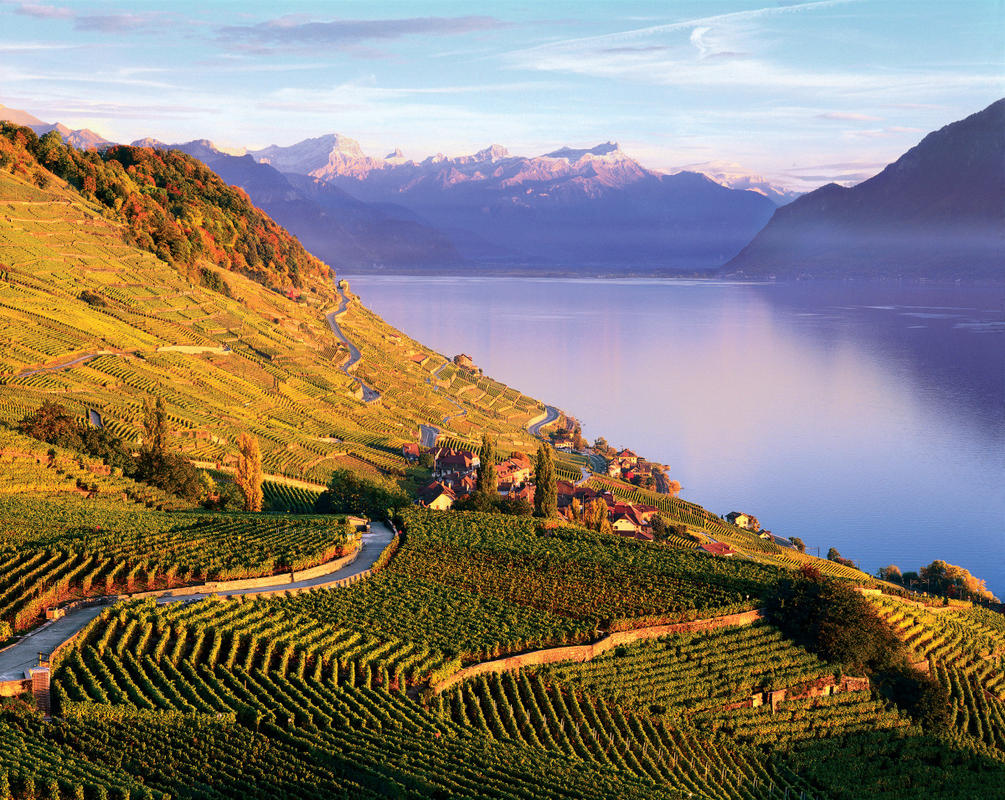 Considered to be part of the Lake Geneva region, Lavaux is in the Swiss Canton of Vaud and is a neighbor to Montreux, Lausanne and nearby Geneva. Hugging the shores are 14 villages and miles of vineyards that consist of eight appellations. These vineyards primarily grow the fresh and fruity Chasselas grape, along with a bit of Pinot Noir. Because Lavaux has a Mediterranean microclimate it is said, rather whimsically, that the area has three suns: one in the sky, one created by the reflection off the lake and one stored in ancient rock for heat.

The most striking feature of Lavaux is the steeply terraced vineyards that go for miles and measure as high as 40 stories – built by Cistercian monks in the 12th century. Add to this the bluer-than-blue Lake Geneva at the foot of the terraces and the Alps rising in the background against a bright sky and you have a scene that looks like it jumped right off the pages of a romance novel.

The villages are as quaint as you would imagine, with cobblestone streets that wind up and down and without reason, preserving little medieval stone houses and shops through time. There are more than enough wine bars and five Michelin-starred restaurants to satisfy even the most discriminating of oenophiles and gourmands. Two must-trys are Tout un Monde in hilly Grandvaux with a perfect view over the lake, land and vines, and Auberge de l’Onde, in scenic St-Saphorin, both a restaurant and cozy wine bar headed by the Gault & Millau Swiss Sommelier of the Year, Jérome Aké Béda. Compared to a larger city, they’re a bargain for the quality.

If you’d like to do more than eat and drink (although we see nothing wrong with that), check out the brand new Chaplin’s World museum – found in his former residence in Vevey (it’s not just Prince that took a shining to Lavaux) – and the walled, medieval Chillon Castle, dramatically set on the edge of the lake. Chocolate and cheese also figure prominently in the region and you can get the inside scoop by visiting Nestlé’s new museum, nest, and the Alimentarium Food Museum – another new attraction.

Lavaux feels like Bordeaux before Bordeaux became a “thing.” There are no crowds, no tour buses, and no group tastings. The locals and winemakers are warm and quick to welcome guests to talk about the area. They are proud of their heritage – from the oldest village of Lutry to arguably the most picturesque village of St-Saphorin – and its unique landscape, history, and people. In Prince’s song, “Lavaux,” he proclaims, "Whatever path I choose will lead me home, Lead me home, Lavaux." There’s never been a better time than now to cross this one off your bucket list and, at the same time, find your heimat -- German for a place that feels like your true home. It's hard not to feel something special here.

Only an hour by train from Geneva, the Swiss Rail Pass will get you everywhere you want to go or you can buy a return ticket from any one of the villages. If you want to spend the night, the Grand Hotel Kempinski Geneva sits across the shore from the famed Jet d’Eau and has a modern, luxe vibe or, if you want to stay right in the region, the Hotel Lavaux in Cully offers a chic stay on a budget.

Janice Tober is a travel and lifestyle writer living in Canada. A former contributing editor for CN Traveler’s HotelChatter, Janice now writes for a variety of publications and specializes in the hip and happening, leaning towards luxe.