Marathons have become an increasingly popular sport in the U.S. with new and seasoned runners alike. Whether you are an avid distance runner or simply a running enthusiast who is looking for a new way to push yourself, the 26.2 miles of a marathon can be a great opportunity to have a little fun and stay physically fit. There are currently over 250 marathons in America with new ones emerging every year, so just how do you determine which ones are the best?

There are many factors that contribute to a good marathon, from size and prestige to course and staffing quality, which can make picking the best a tough decision. Marathons can range from under 50 participants to tens of thousands and take place in every type of climate and course conditions imaginable, causing many participants to split their marathons up into seasons like winter, fall, and spring marathons. Runners train months and months in advance for their races, so it's hard not to be selective when choosing the best one for you. The selection process can be made easier in bigger marathons where you have to qualify to enter, but even smaller marathons that simply require an entrance fee can give a runner a lot to think about.

Here's a look at the best marathons in the America and what makes them so great. 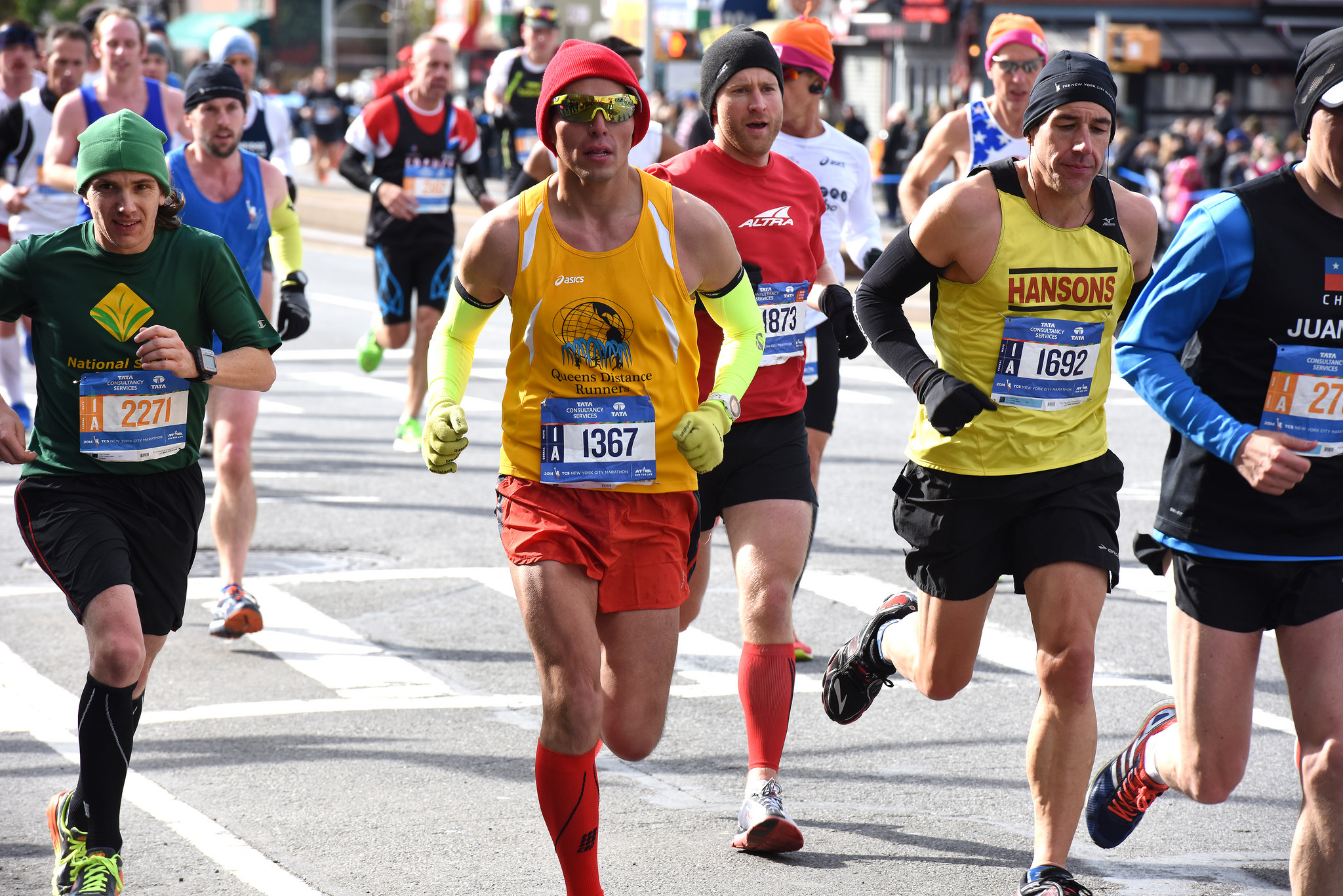 The New York City Marathon is arguably one of the most famous marathons in the world and is also one of the largest, with 45,103 finishers in 2010 alone. The course runs through all five boroughs of New York City and concludes in the city's famous Central Park. The marathon also attracts one of the largest viewing audiences in all of sports, with crowds numbering around two million, and gaining clout as one of only two marathons that is televised on national television. Because the race is so well-known and prestigious, just gaining entry can prove to be quite the task. A lottery is done to choose participants because so many people desire entry, but if you're not one of the lucky ones, there are still other ways to gain admittance. You can gain automatic entrance for either running for charity or not being chosen for three consecutive years. However, if you are lucky enough to gain entry, you get to participate in a race steeped in history and tales of triumph, having started in 1970 and producing some of the most talented marathoners in history, like current women's world record holder Paula Radcliffe. 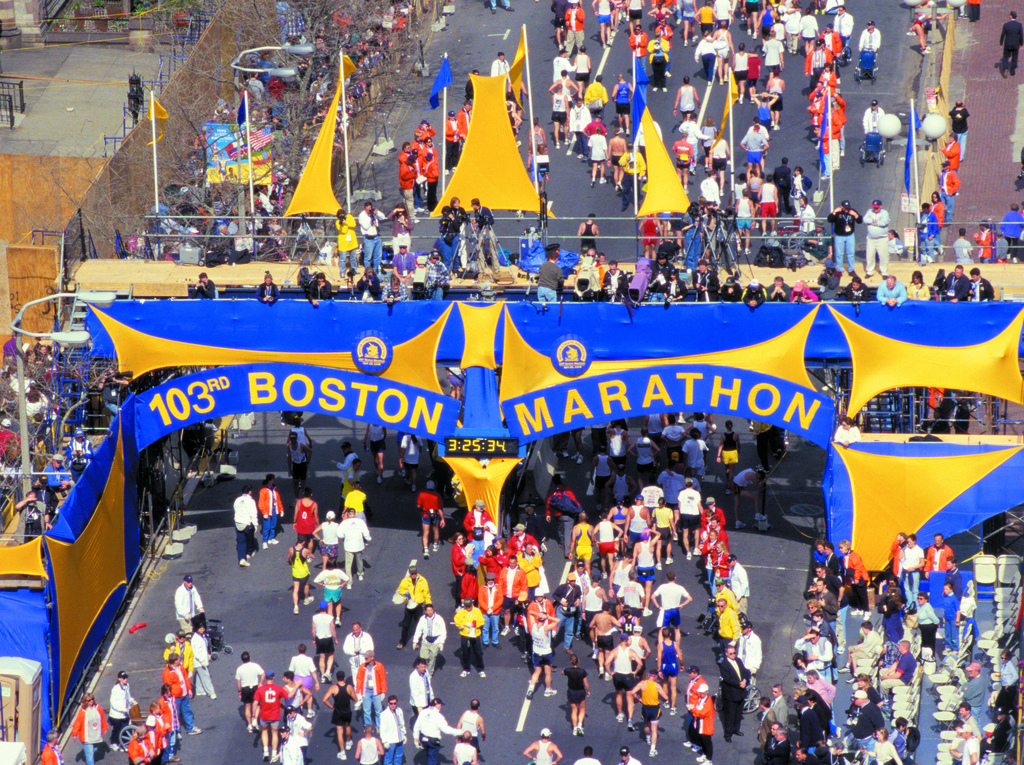 The Boston Marathon is the oldest marathon in the world and also one of the most prestigious. Began in 1897 after the success of the first modern-day marathon competition in the 1896 summer Olympics, the Boston Marathon is one of the five World Marathon Majors and features a hill-filled scenic course through Boston. The course begins in the Boston suburb of Hopkinton, runs through several towns, and finishes in Boston's Back Bay. It is considered to be one of the more difficult marathon courses because of the Newton hills, which culminate in Heartbreak Hill near Boston College. Because of the prestige of the marathon, it is not surprising that it is one of the most difficult to gain entrance. Participation is capped at 25,000 entrants and inexperienced runners will have a hard time qualifying, which is unfortunate but also allows for the best competition possible. In order to qualify, a runner must meet certain time requirements in a previous marathon depending on their age. The event is also widely watched and attracts 500,000 spectators each year, making it the largest watched sporting event in New England. 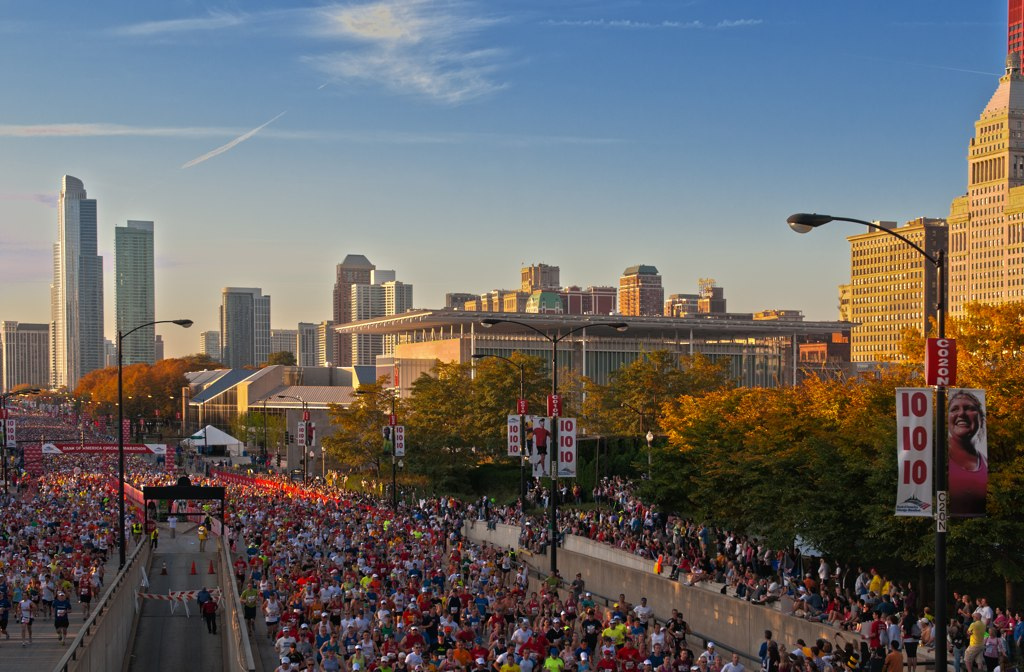 The Chicago Marathon is emerging as one of the most popular marathons in both the U.S. and the world due in large part to its fast and flat course which urges the pursuit of personal records and world record performances. Even beginners can participate in the marathon, as there is no qualifying time to participate. However the race is limited to 45,000 runners on a first-come, first-served basis and only those that finish within 6 ½ hours are timed. The race has a rich history and has been run every year since the inaugural September 25, 1977 running under the original name of the Mayor Daley Marathon. The course is a loop course, starting and ending at Grant Park, and winds through 29 of the city's neighborhoods, ensuring a scenic route. The loop can generally be divided into three sections: North, West and South that take runners by three of the city's main stadiums. For the less seasoned and experienced runners alike, it features 30 aid stations with medical staff at each stop. 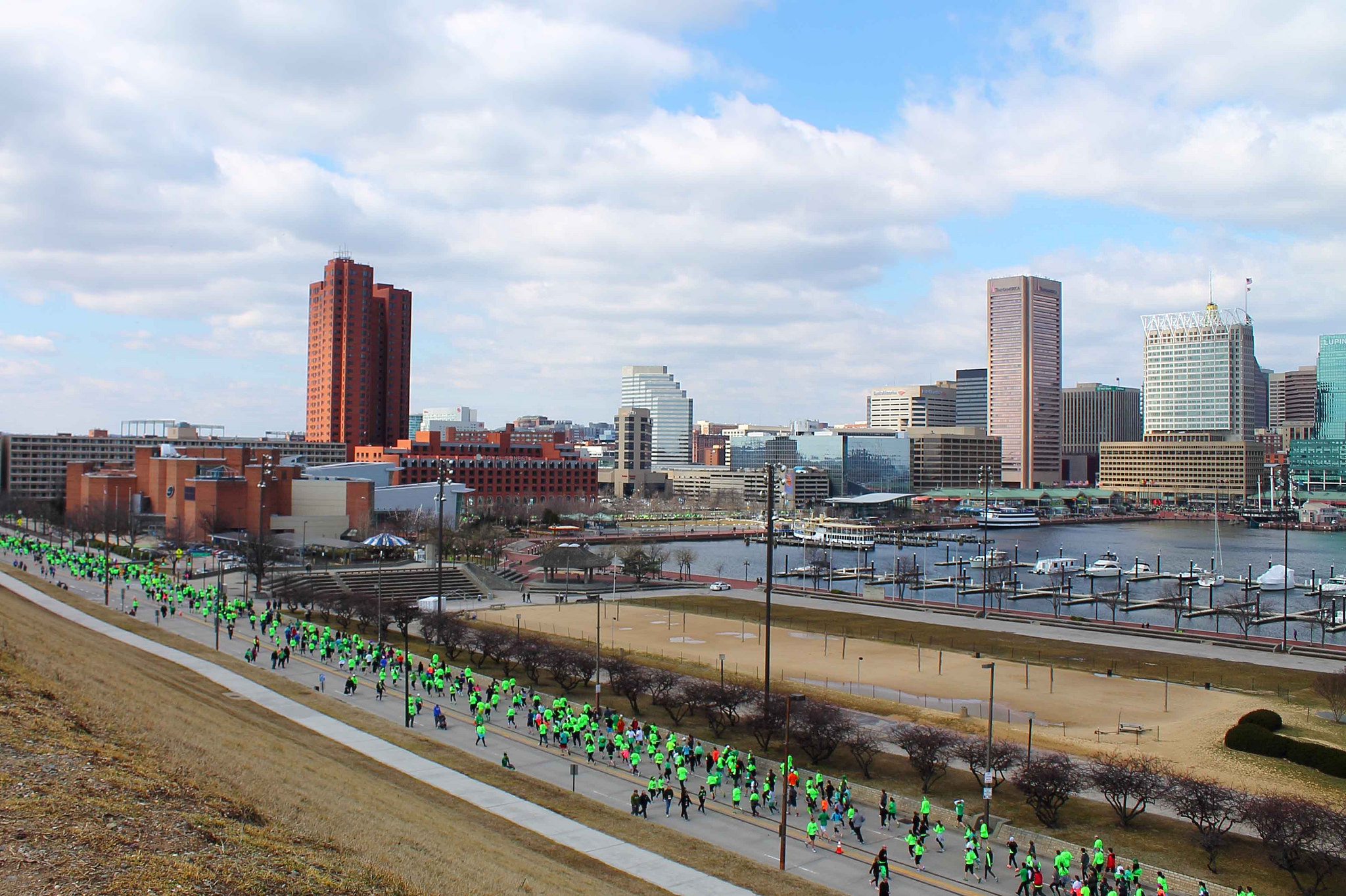 The Baltimore Marathon is gaining in popularity as the flagship race of several races held in the city that are collectively known as the Baltimore Running Festival. It is one of the fastest growing marathons in the U.S. and drew a record 22,281 participants in 2010. The race begins at the Camden Yards sports complex and travels through many diverse neighborhoods of Baltimore, including the scenic Inner Harbor waterfront area, historic Federal Hill, Fells Point, and Canton, Baltimore. It then passes through other important focal points of the city such as Patterson Park, Clifton Park, Lake Montebello, the Charles Village neighborhood and the western edge of downtown, ending at virtually the same place that it starts. It is a great race for beginners and pros, with registration requirements only being based on age. Since its inaugural run in 2001, organizers have altered the race based on runner feedback, which has included smoothing out the streets of the course and adding pre-race restrooms and it has also gained a big corporate sponsor in the Baltimore-based athletic apparel company Under Armour. The race is also popular with young participants as the official entrance age requirement is just 16. 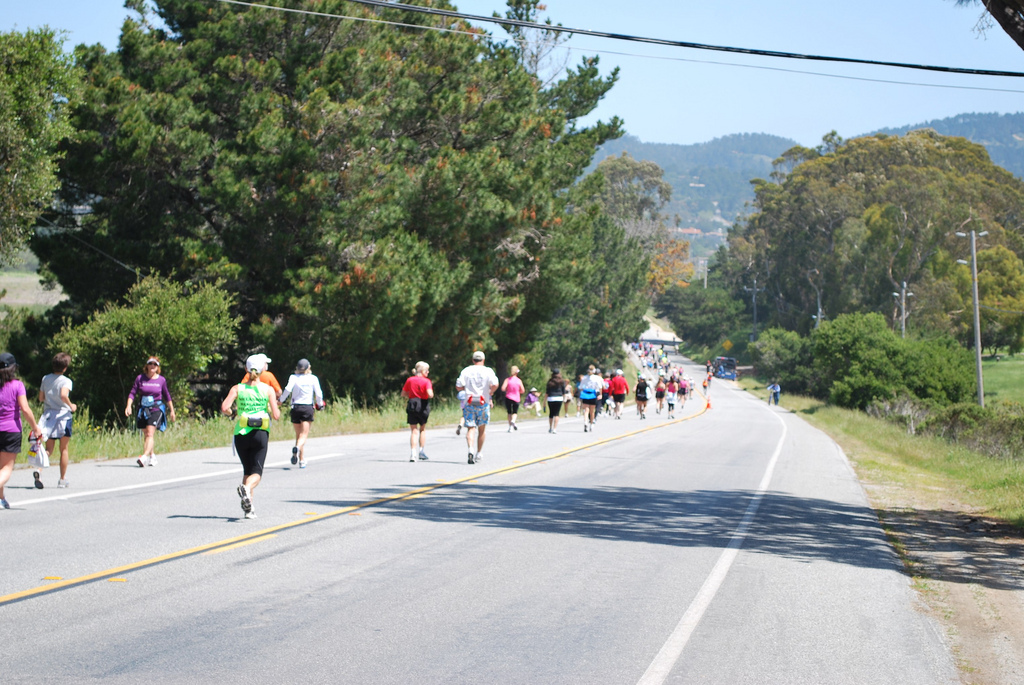 Big Sur is inarguably the most scenic marathon in the country, traveling along a breathtaking stretch of Northern California coastline. If you're worried about becoming overwhelmed by size, it is also one of the smaller "big" marathons, usually attracting about 4,500 participants annually. While the size may be less intimidating, the course is a bit more difficult. The race takes place along Highway One, just south of Carmel, California and is very hilly, which makes it a less likely choice for beginners. Entrance is limited to those aged 16 or older whom are "well trained," as the course is challenging and timing is capped off at 6 hours. The course was re-routed in its May 2011 running due to the collapsed coastline of Highway One along the usual race road. The compacted course covered 12.1 miles of road with runners headed in two directions along Highway One, with marathoners turning around just north of the Rocky Creek Bridge, approximately a half-mile north of the collapsed road. The race is expected to return to its normal route next year if the coastline is restored. 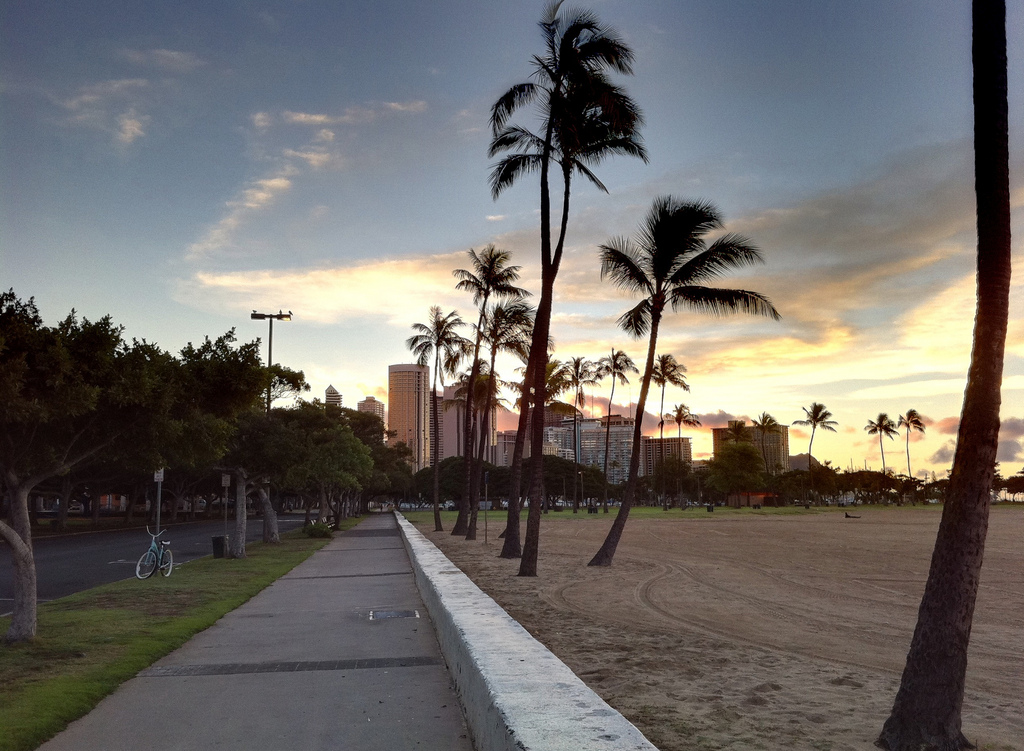 If you're picking a race on the sheer potential of scenery alone, there is no better race than the Honolulu Marathon. It's also a great escape from chilly mainland temperatures, as the race is run every second Sunday in December. The course starts near Ala Moana Beach Park across from Ala Moana Center and progresses west along the waterfront toward downtown Honolulu. It then loops through the downtown area and bends back east through Waikiki, around Diamond Head, and out toward the eastern suburbs of Honolulu, winding through Hawaii Kai before doubling back toward the finish line at Waikiki's Kapiolani Park. Participants consider the course moderately difficult because of the tropical weather conditions and a relatively hilly route. Nevertheless, the race also remains a popular choice for first-time marathoners and surprisingly, those from Japan. In 2008, 14,406 of the total 23,231 entries were from Japan, which made up nearly 62% of the field. Another positive? The marathon also has a high success rate, with about 25,000 runners finishing the race each year, and placing it among the world's ten largest marathons in terms of total finishers. 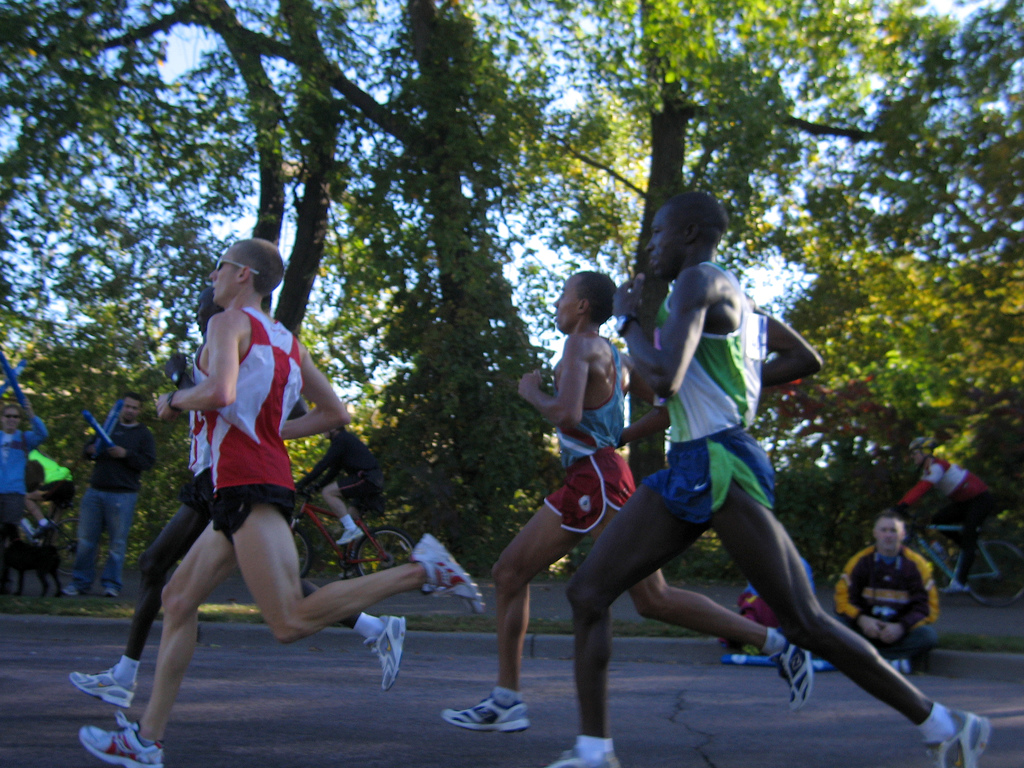 Touting itself as the "most beautiful urban marathon in America," the Twin Cities Marathon is one of the most scenic and also one of the most competitive. It has consistently been ranked in the top three most competitive marathons for American runners by Running Times magazine. It was first run in 1982 and typically takes place during the first weekend in October, making it the perfect time to take in the scenic fall colors. The course begins at the Hubert H. Humphrey Metrodome in downtown Minneapolis, and winds around several of the city's scenic lakes before turning along the banks of the Mississippi River. It follows the river for several miles before crossing into Saint Paul, and then proceeds up historic Summit Avenue to finish at the state capitol building. It is considered to have one of the more challenging finished among American marathons, with Miles 21-25 of the course proceeding on a steady uphill from the river. For best performance, the race is run in two waves, with those in the first wave starting approximately three minutes before the second and featuring runners who have submitted previous marathon qualifying times.

9 Boston Festivals You Need to Add to Your Bucket List