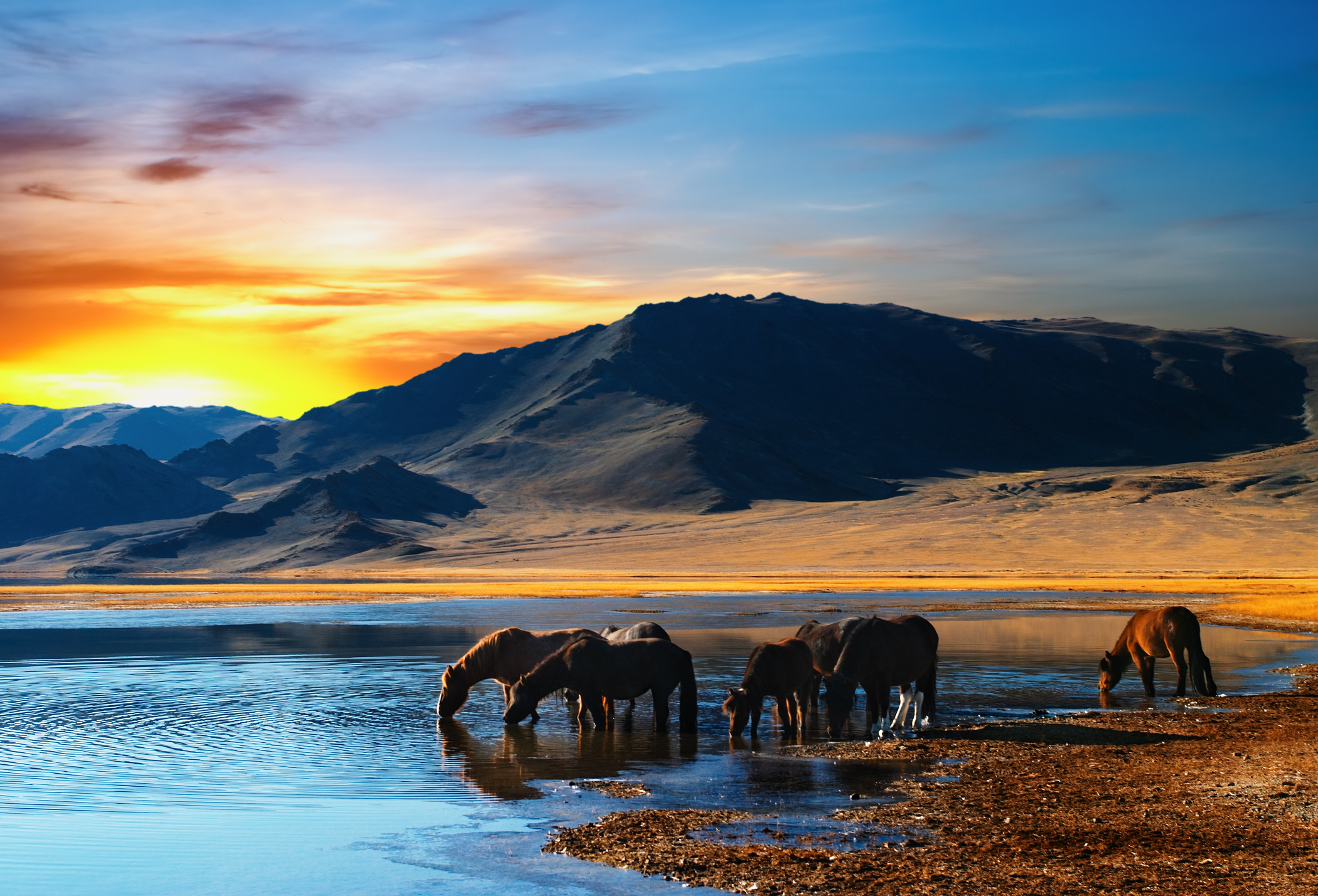 The vast, majestic emptiness of Mongolia is its main highlight, along with the unique nomadic lifestyle and esoteric Tibetan Buddhism. Travelers to this ancient land will find its turbulent history laid out before them in a panorama of earth and sky dotted with monasteries, Buddhist temples and settlements. One of the world’s greatest train rides, the Trans-Siberian Railway, passes through the huge country. The harsh Gobi Desert and high Alpine mountains are home to tribes herding their animals as they have done for untold centuries.

A visit to Mongolia is a journey back in time, the likes of which isn’t offered anywhere else on earth. Outside the capital, Ulan Bator, the country’s breathtaking topography changes region by region, with tribes in the mountains corralling reindeer and camels, the transportation of choice in the Gobi Desert. The strong, stocky Mongolian ponies are everywhere, with riding the best way to see the iconic land and its customs. Lush meadows provide grazing fields for the ponies and yaks, and villagers still live in yurts (also known as gers), traditional to the region.

Mongolia is a huge country, with over 600,000 square miles of incredibly unspoiled natural beauty, although the distances to be covered between destinations make daytrips virtually impossible. Ulan Bator has reachable attractions nearby including the UNESCO World Heritage site of Orkhon Valley, the heart of Genghis Khan’s Mongol Empire and the birthplace of Buddhism. Karakorum, the great Khan capital where he ruled the world’s largest ever empire is here. Several national parks, a hot springs spa and the beautiful Great White Lake are nearby.

Tourism in remote Mongolia is on the upswing, with a few Western-style hotels at average prices in Ulan Bator, along with a number of more economical guest houses. Outside the capital, hotels are mostly a grim reminder of the country’s Soviet era, with local tourist yurts set up by entrepreneurial residents the best option. Terelj National Park has a five-star spa and several four- and three-star resorts, and tour companies offer ger camps with occasional rooms for independent travelers. The hospitality is legendary and Mongolian people are friendly and curious about other lifestyles.

It has to be admitted that travel in Mongolia can be difficult at best, as few roads outside the capital are paved and the public transportation system can’t efficiently cope with the vast distances between attractions. For those short on time, AeroMongolia offers a few domestic flights linking the different regions, although dual pricing for foreigners is the norm. For the more adventurous traveler, four-wheel drive minibuses and Russian jeeps travel between cities and towns, although the downside is overcrowding and a lack of sobriety among passengers. Train travel is a possibility, although the rolling stock is Soviet-style and only a few places are covered, with self-drive, preferably with a guide, GPS and good map, the best option.