The Waterfall Wonderlands of Croatia

Waterfall lovers and world travelers sing the praises of Plitvice Lakes National Park in Croatia. As well they should, but it’s not the only water wonderland in a country veined with rivers: Krka National Park is the folksier cousin of glamorous Plitvice. 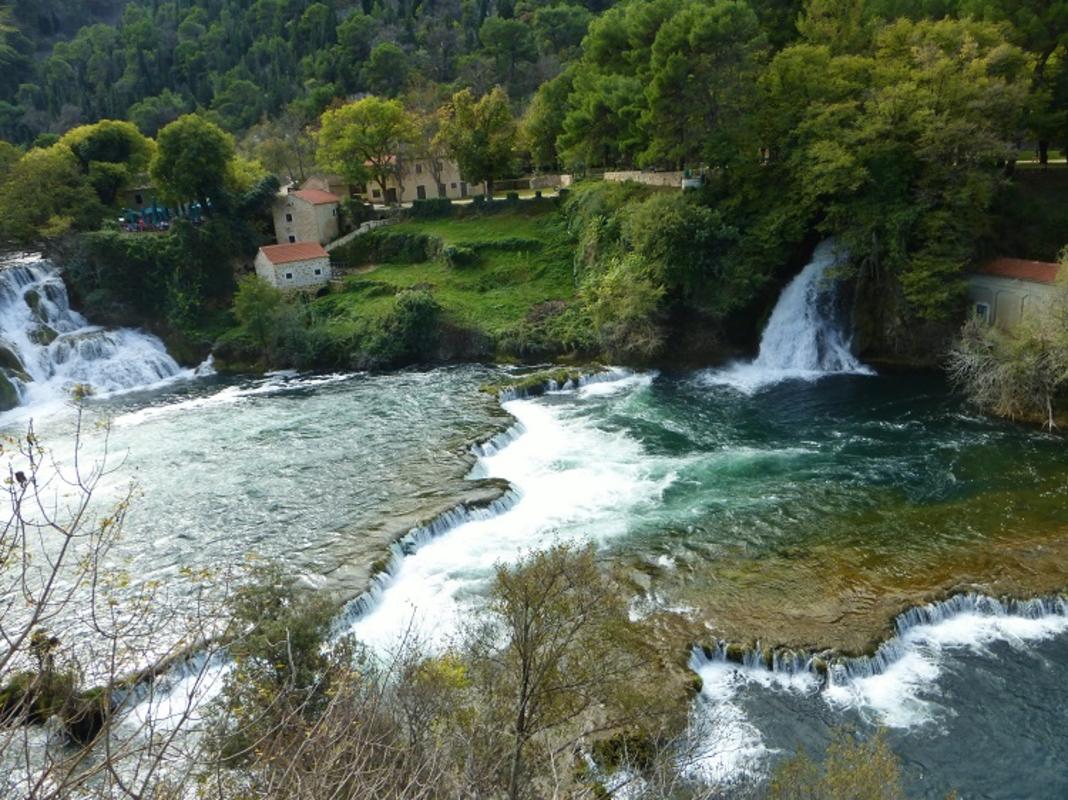 It’s less than a two-hour drive between the parks, but each deserves more than a day of exploration. Krka offers swimming, river cruises and a stroll through the days of yore. Plitvice astounds with dozens of waterfalls and stunning views. 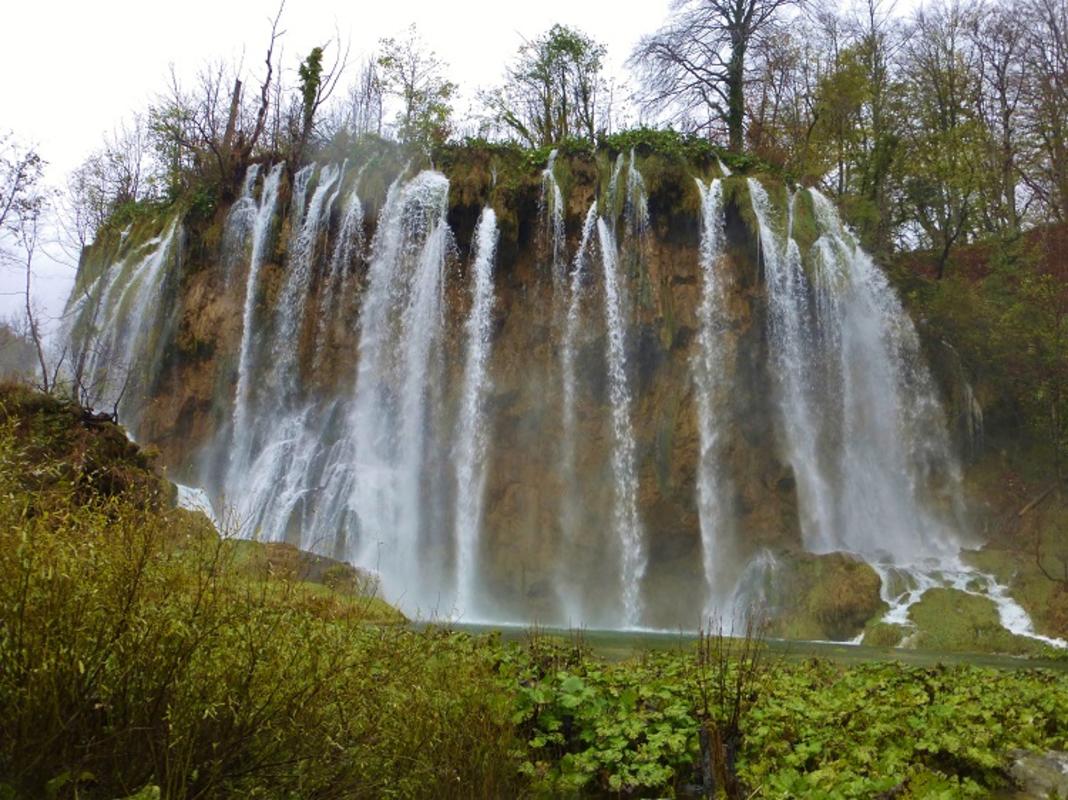 Both the Krka River and the lakes of Plitvice flow over karst rock formations, tidy stair-step ledges of travertine precipitated from calcite-rich water and encrusted in moss and algae. 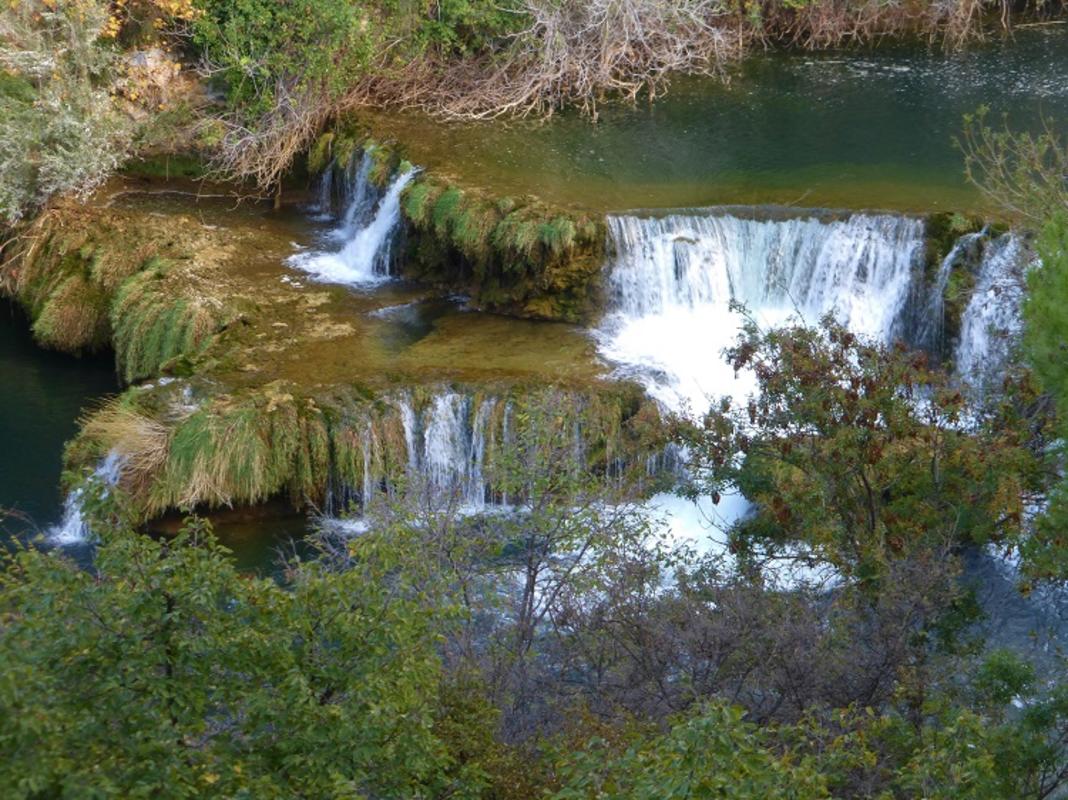 Krka National Park was established in 1985 to protect the Krka River’s waterfalls, woodlands, and the tiny island of Visovac, home to a Franciscan monastery that dates back to the 14th century. 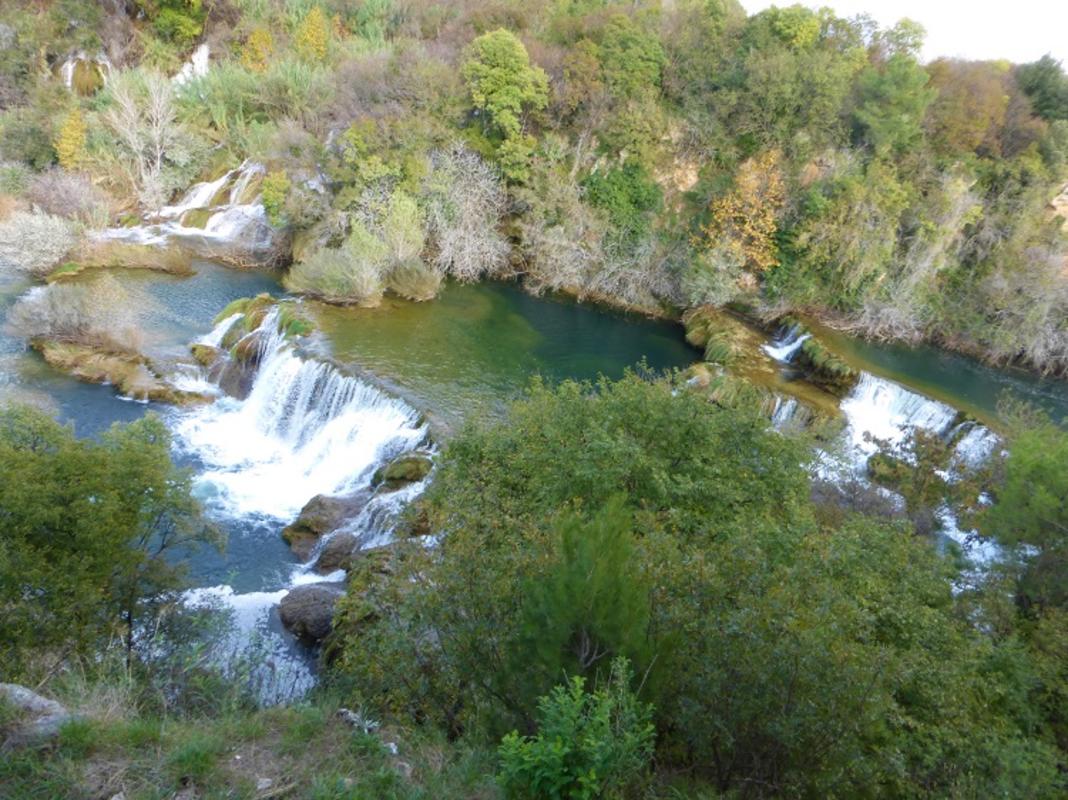 Within the park, over a mile of boardwalks weave through magical woodlands over bubbling creeks and rushing rapids. Tree roots hug the banks, ducks dip and drink the swells. The water is crystal clear, and you could spend all day trying to name all the shades of blue and green. The trail descends to the base of the largest fall (40 feet), Skradinski Buk, where a bridge crosses the river and climbs to a fascinating ethnographic heritage complex.

The pool below Skradinski Buk is the only body of water in either park where you can swim. Brace yourself, it will take your breath away, but little vigorous paddling will warm you right up. Once the chills creep in, you can enjoy a cup of tea and a traditional meal at the outdoor café nearby. 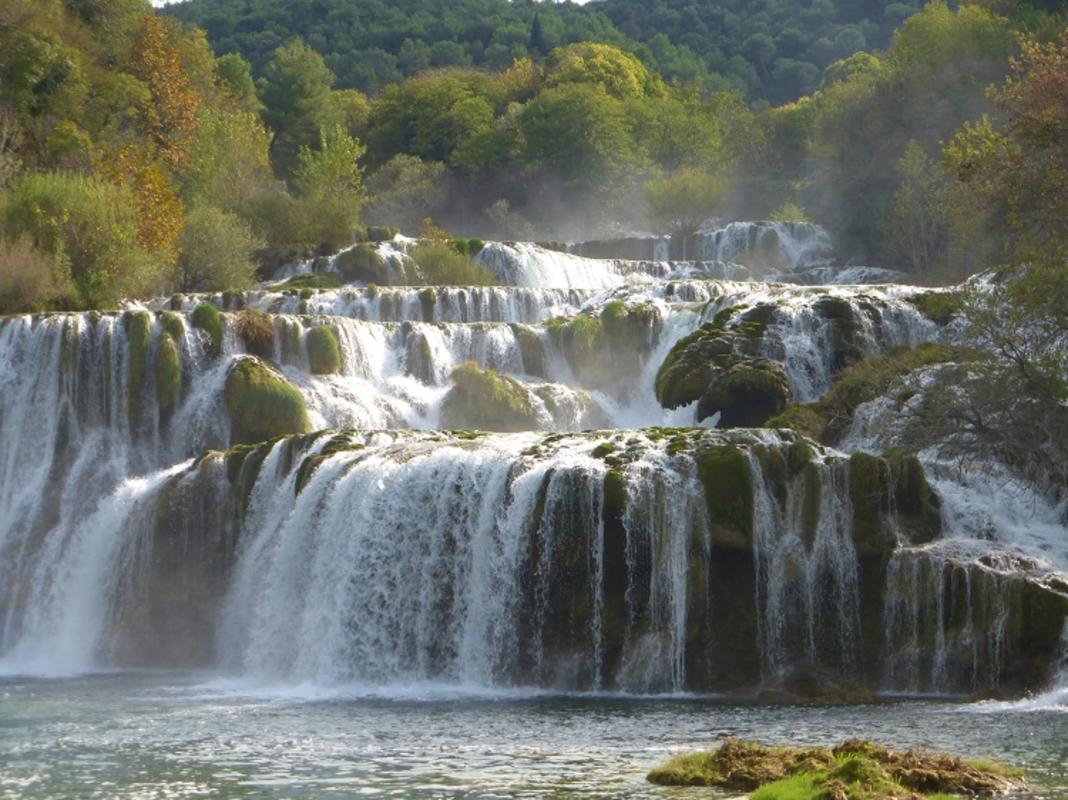 If you’ve planned a second day trip, take a four-hour excursion upriver to the monastery on Visovac Island and further up to Roški Slap. Visovac Island looms out of the river like a mystical vision, its church tower poking up over centuries-old Italian cypress trees. It’s an active monastery, a peaceful refuge of gardens and peacocks, with a humble church, small museum and lapidarium. 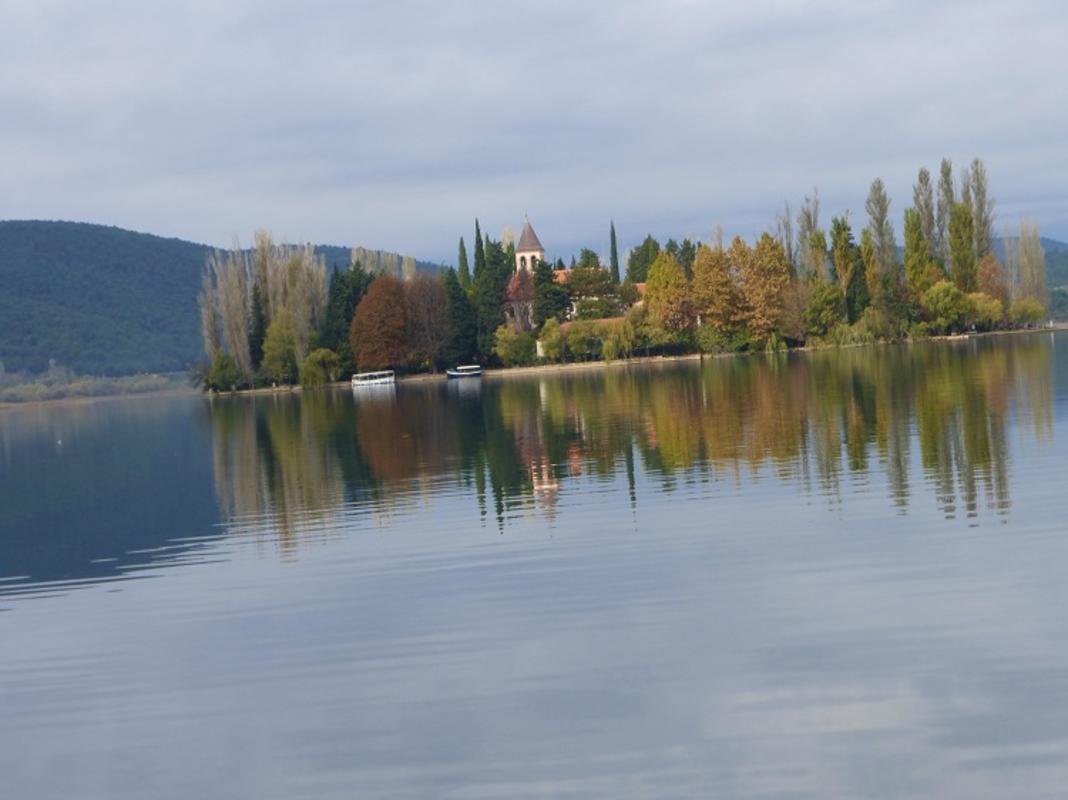 Roški Slap pours into the main river channel from a series of low travertine ledges, eddying in grassy channels and riparian pools. A stroll upstream by boardwalk takes you across the broad ledges, then back to the boat. 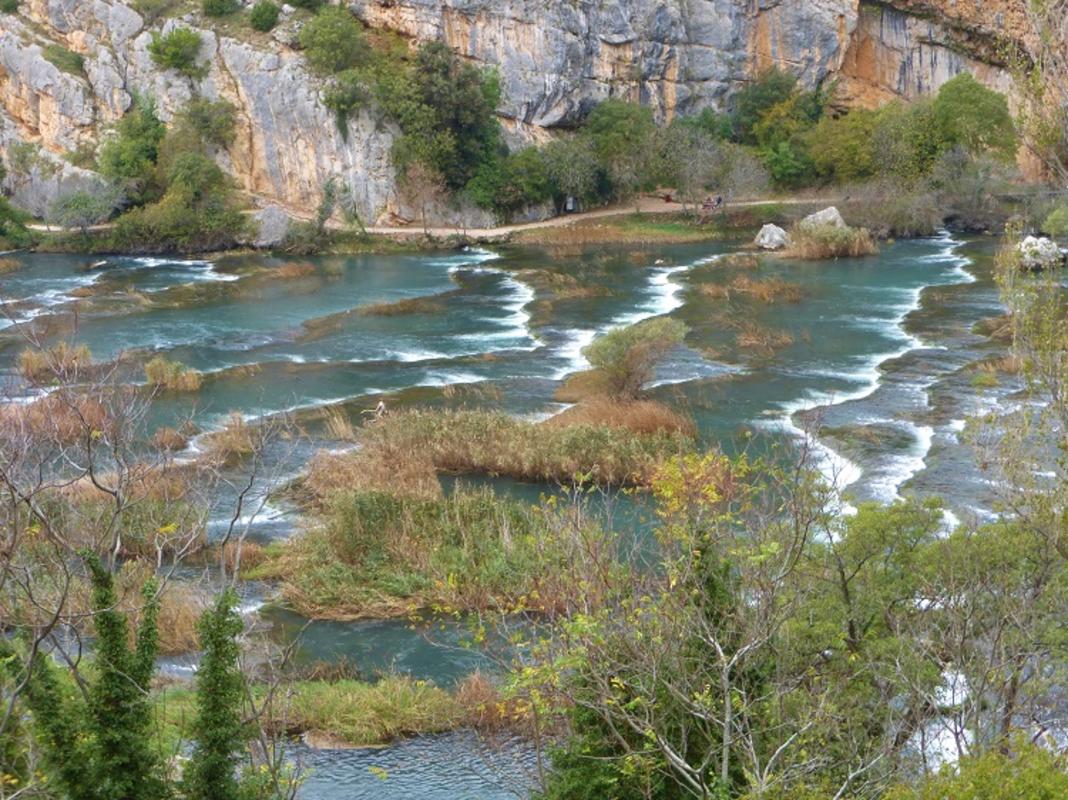 Between Visovac and Roški Slap the river narrows into a stunning steep canyon, where the cliffs are mirrored in the calm river, creating a strange, but pleasing, symmetrical world. 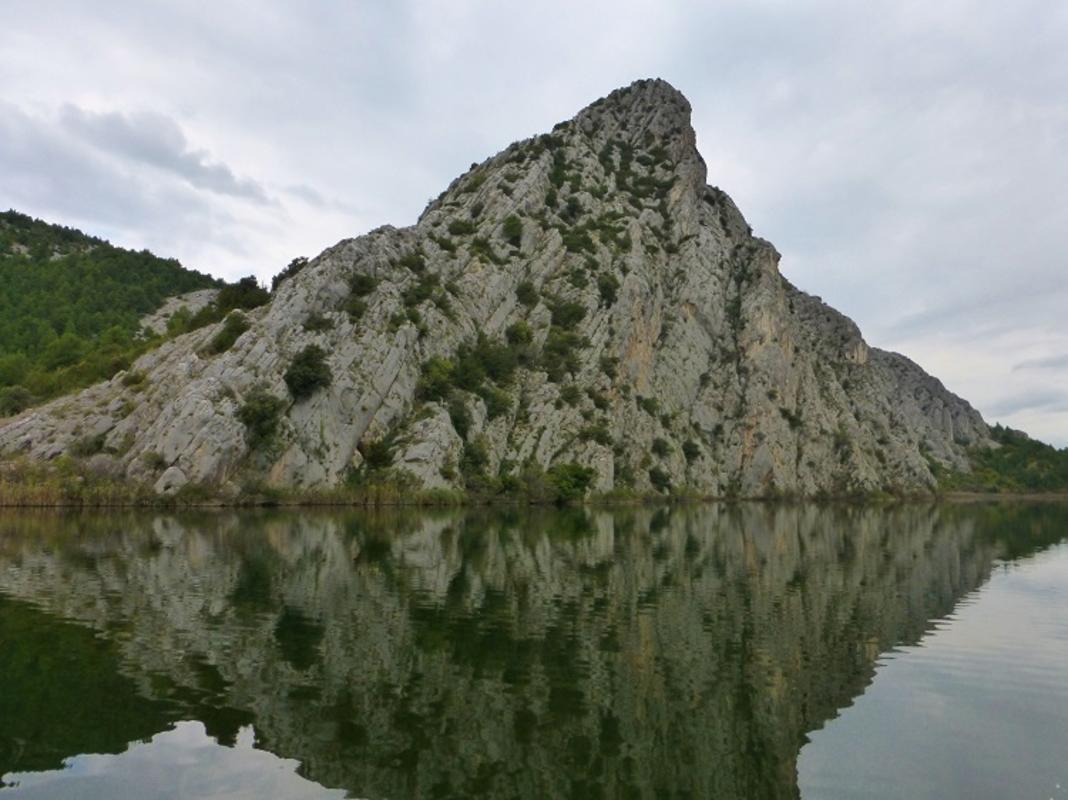 Plitvice Lakes, a UNESCO World Heritage site, is the largest national park in Croatia. From Mongols to Ottomans to Napoleon, the region has endured conquests and wars for centuries. It wasn’t until the 1800s that tourism invaded. In 1949 the national park was established, but it didn’t bring an end to conflict. From 1991 to 1995, during the Homeland War, Serb rebels occupied the park in what is called the "Plitvice Bloody Easter." Afterwards, the park was among the first in Croatia to be cleared of mines and reopened for visitors in 1998. These days over a million people visit the park a year — a huge driver for the local economy. 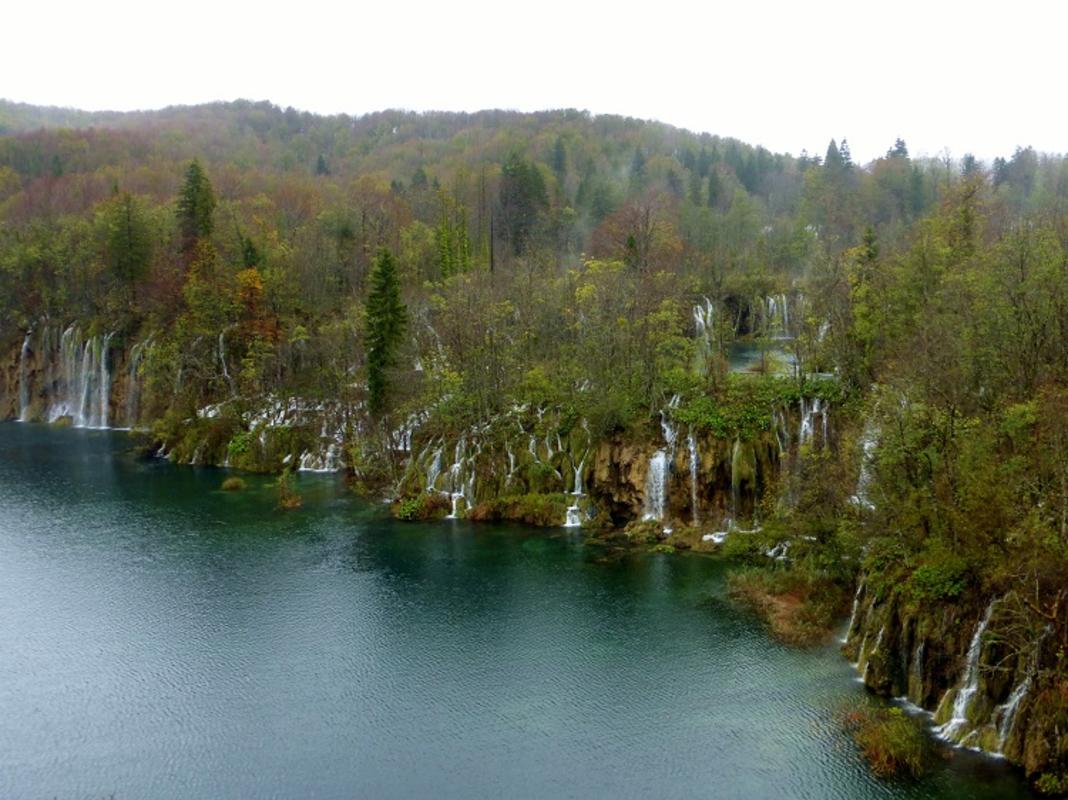 The centerpiece of Plitvice’s 114 square miles is a blue garland of 16 lakes cascading over a multitude of travertine barriers, carving its five-mile course through heavily forested mountains rich with flora and fauna. The span of lakes — 12 upper and 4 lower — can be traversed in one day of hiking, with the aid of buses, ferry boats and a panoramic train, but there are many more hiking and biking trails to explore along with a number of dramatic caves if you have the time. 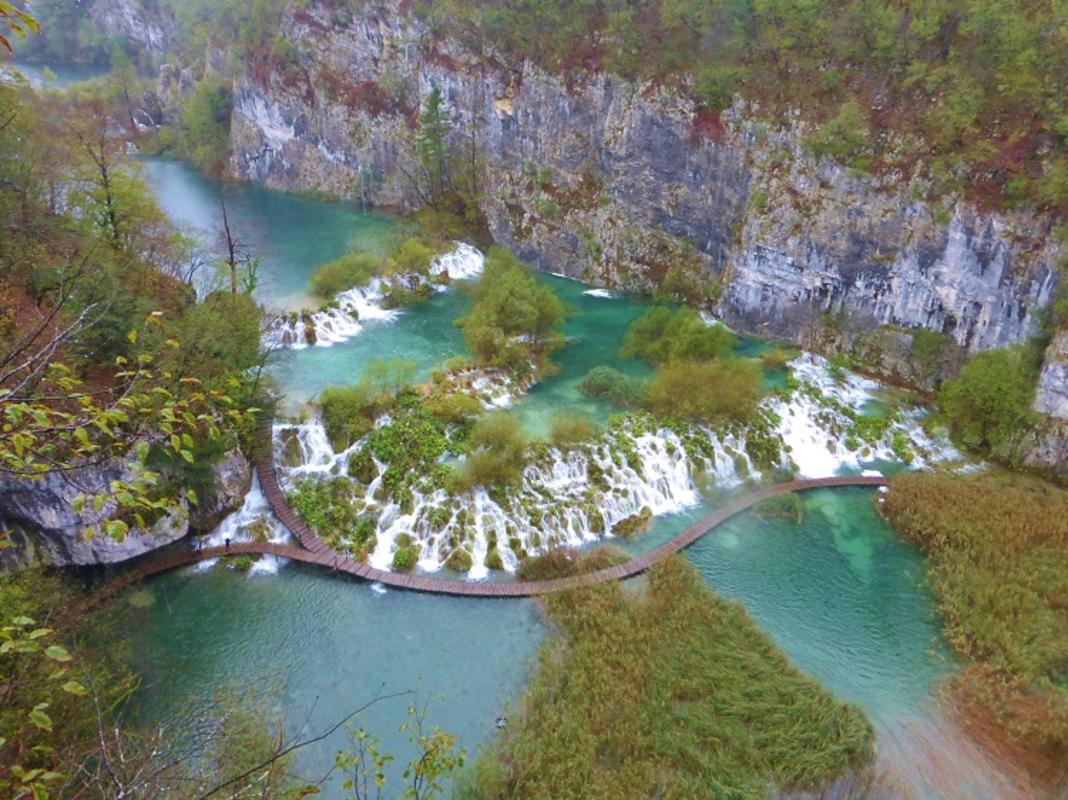 Plitvice’s lakes glow like gemstones: turquoise, lapis, chalcedony, azurite. The jewel of the hour depends on the light and minerals in the water. It’s tempting to find a hidden nook and slip into its loveliness, but don’t. It’s a delicate ecosystem — thousands of bodies dipping into it every year would love it to death. 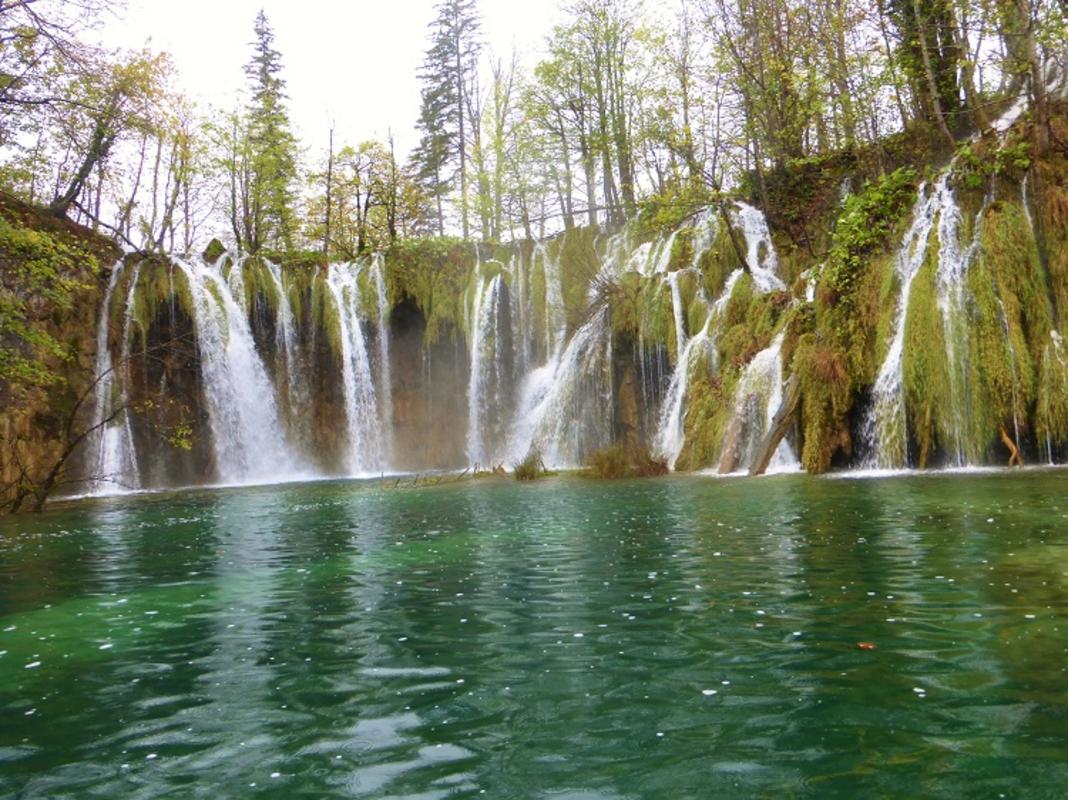 There’s so much water flowing at Plitvice, you don’t need to swim to feel energized, and in a rainstorm it feels as if all the waters of the world are gushing by in a cacophonous flood. In winter, it’s the Snow Queen’s fairyland. On warm sunny days, you’ll have to share the love as you squeeze by crowds on the narrow trails. If you want solitude, go off-season and learn to appreciate the rain and the ice. 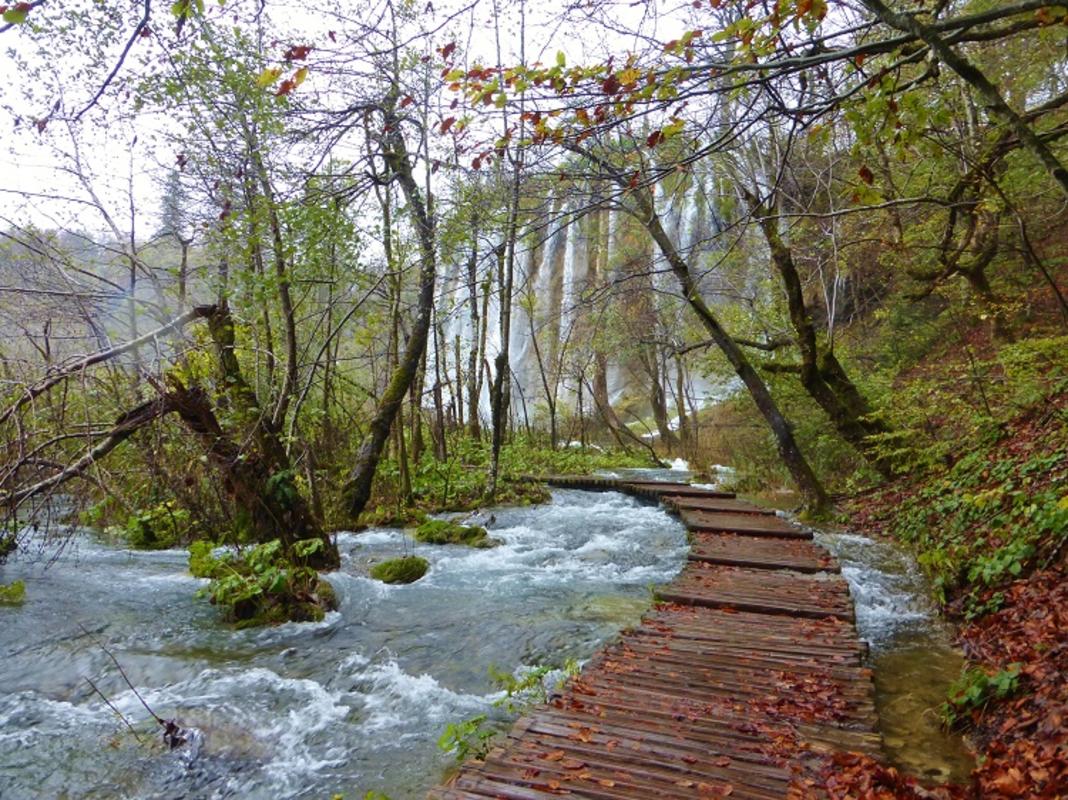 After a woodland hike from the upper end of the park (reached by bus), the trail opens out to the upper lakes, the smaller of which are scattered willy-nilly, winding around waterfalls, wetland and forest. The upper and lower lakes are separated by the largest, Kozjak, which features an eco-friendly electric ferry boat. The four lower lakes follow one after another as they drill their way deeper into a canyon whose walls rise to 130 feet. At the iconic Great Cascades, the trail branches off to the Šupljara Cave on one side, while the other curves along the base of the cascade. 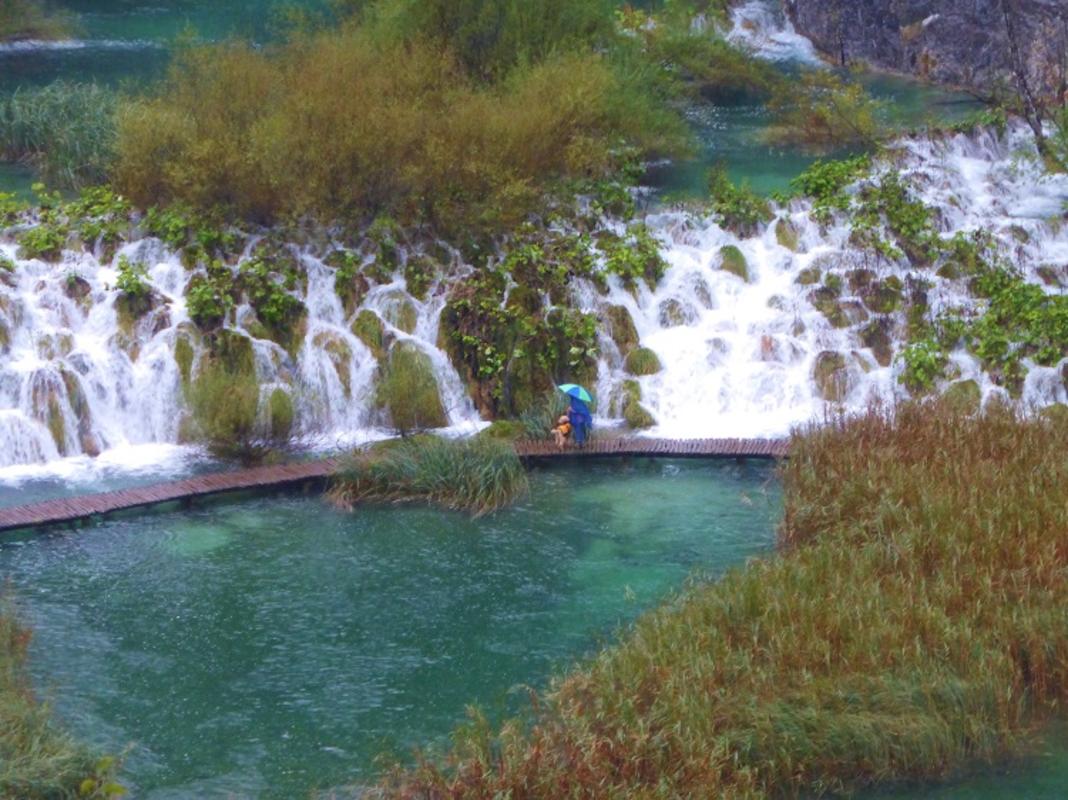 The lower lakes culminate at an 80-foot waterfall tumbling into a stunning chasm called Sastavci. Adjacent to Sastavci, the Plitvice River plummets over the 256-foot Great Fall, Veliki Slap, and together they surrender their enormous power to the Korana River. 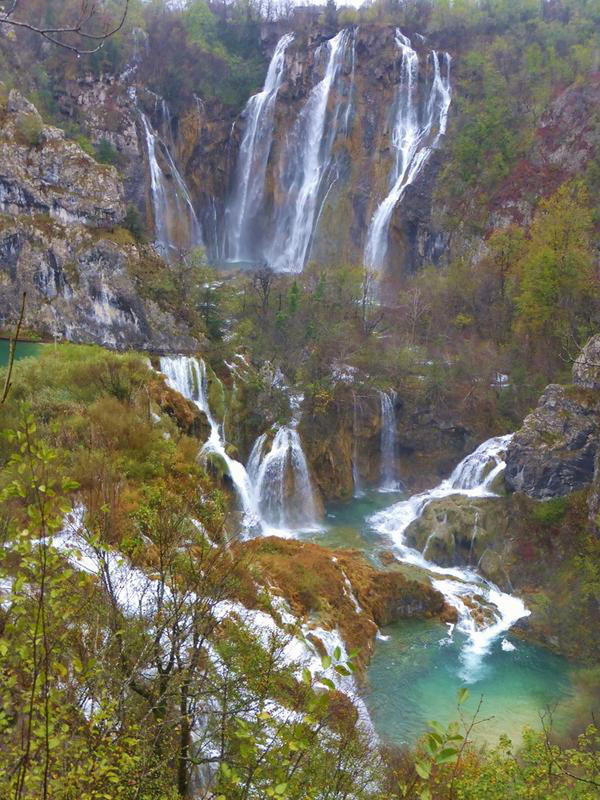 Krka is a three and a half hour drive from Zagreb and an hour from Split. Plitvice is two hours from Zagreb. If you don’t fancy renting a car, buses and tours are widely available. Both parks are in remote areas, but have hotels and camping nearby.