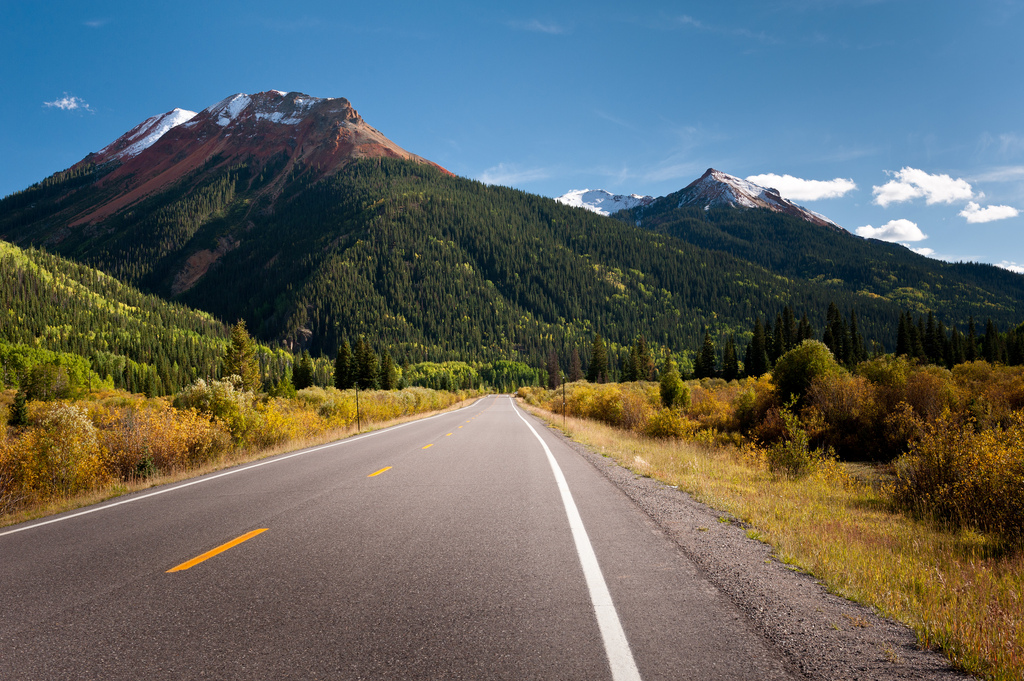 It may be only 24 miles long, but the Million Dollar Highway takes you on a journey through old mining towns on a heart-pounding ride in the San Juan Mountains of southwestern Colorado from the town of Ouray to Silverton. U.S. 550 is not for the faint of heart, full of S-curves, vertiginous drops and no guardrails, which make for a wild ride through the Rocky Mountains. Several legends surround the Million Dollar Highway, one saying the road cost $1 million to build in the 1920s. Another suggests that the dirt fill used on the road contains $1 million in gold ore. Whatever the truth may be, we say experience it for yourself.

Start just south of Ouray, a former mining town with Victorian-era buildings, traveling north to Silverton through the Uncompahgre Gorge, a deep mountain canyon with the Uncompahgre Rover and Red Mountain Creek at its bottom. Then climb to the summit of Red Mountain Pass at 11,000 feet where you find the hairpin curves as you climb and incredibly narrow lanes cut into the sides of mountains. Along the way you can see the remains of the Idarado Mine as well as a countryside speckled with wildflowers in the spring and elk, black bears, mountain goats and deer.

If you keep traveling north of Durango, you pass Trimble Springs, hot springs that have been attracting visitors since the late 19th century. The Animas River traverses the highway below the Hermosa Cliffs. Keep traveling to reach the San Juan National Forest, Haviland Lake and Elektra Lake. Next come Engineer Mountain and Twilight Peak before crossing Coal Bank Pass at 10,640 feet. That takes you to Molas Pass at 10,970 feet with its panoramic views of Molas Lake, the Animas River Gorge and Snowden Peak. Next up - Silverton - surrounded by the 13,000-foot peaks of Sultan Mountain, Kendall Mountain and Storm Peak.

Keep traveling past Silverton through the Mineral Creek Valley before ascending to Red Mountain Pass where you can see the Longfellow Mine. More spine-chilling curves and steep grades greet you before reaching Lookout Point that looks down on Ouray, a mere 10 miles from Telluride.

9 Ways to Get Wet and Wild in Taiwan