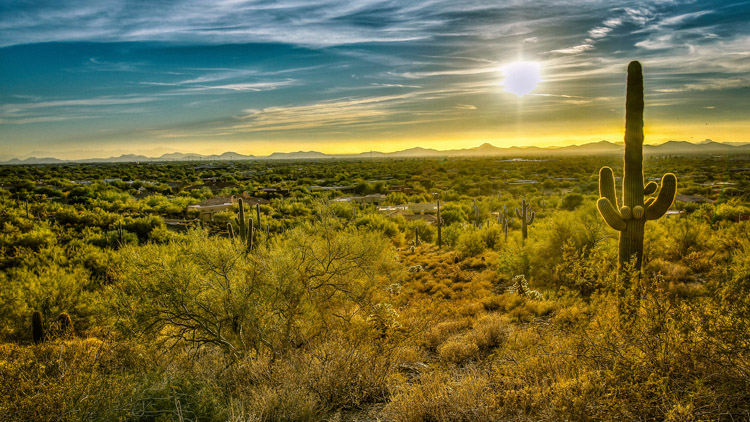 Although many people look at it simply as a suburb of Phoenix, Scottsdale presents many great features that its larger neighbor does not. This upscale area has been developed with vacationers in mind, making it a breeze to explore and a pleasure to get to know. Dotted with golf courses and spas, this city is geared toward leisure. Originally inhabited by the Hohokams between 800 AD and 1400 AD, Scottsdale was also a Pima village for a large portion of its history. After the first Westerners settled here in 1868 to lay down irrigation canals, the popularity of this once-quiet area exploded – and has been steadily increasing ever since.

There’s a whole other side to the Scottsdale area beyond the spas, golf courses and other upscale amenities. If such pursuits aren’t your cup of tea – or if you simply grow weary of them and would like to try something a little bit different – you have plenty of options at your disposal. They include:

With a history that has been heavily influenced by the need to irrigate a harsh desert terrain, Scottsdale comes by its complex network of canals naturally. Today, these canals serve the dual purposes of providing water to the area – and as a popular place to get in a bit of exercise. Whether you choose to walk, jog or bike, the canals of Scottsdale are always a great place to stretch your legs a little bit.

There’s much more to a visit to Scottsdale than luxuriating and relaxing. You can also partake in some prime outdoor fun, especially if you head over to the Apache Trail. At more than 41 miles in length, this trail traverses parts of the scenic Tonto National Forest and is an excellent place to get a feel for the topography of the region. It is built over what used to be a stage coach route, making it historic as well.

With a short, one hour drive out of Scottsdale, you can explore one of the most starkly beautiful parts of the American Southwest: the Superstition Mountains. Lost Dutchman State Park – which is named after a man who, many years ago, owned a “hidden goldmine” on the land – is the best place to visit. Hiking and exploring the park’s tantalizing rock formations is just one excellent way of passing the time here.

Another exceptional way to enjoy the great outdoors around Scottsdale is by hiking up Pinnacle Peak. It’s located on the north side of Scottsdale and is often overlooked by visitors to the area. The hike itself is a bit strenuous, but the payoff – sweeping views of the surrounding area – makes it well worth it.

The vast majority of the people who come to visit Scottsdale are retirees. Still, the area has many topnotch options for couples and families with children as well. The trick is knowing where to look to find some of the best attractions, which include:

Parents and kids alike will get a kick out of the world’s tallest fountain, which is located in nearby Fountain Hills. When at its strongest, the fountain reaches a breathtaking 560 feet into the air. It is one sight that those who see it won’t soon forget, and it’s a great way to put an exclamation point on any visit to the Scottsdale region.

Couples who enjoy checking out great examples of architecture will thoroughly enjoy a visit to Taliesin West, which was the winter home of architect Frank Lloyd Wright. Admission is a bit steep, but is well worth it if you’d like to experience a healthy dose of culture.

Parents who are looking for ways to wear the kids out – while entertaining them – should hightail it over to McCormick-Stillman Railroad Park. There, they’ll find a well designed playground and the primary attraction: a kid-sized railroad. Children will have a blast playing at the park and riding around and around on the tiny train.

Scottsdale isn’t well known for its cuisine; the majority of the food that you’ll find will be flavored with the strong Tex-Mex influences that permeate the area. If you only get to try out a single dish while in Scottsdale, try to make it freshly made chile con queso. You can find it virtually anywhere in the area, and you won’t find more delectable examples of it anywhere else.

Since it’s located right near Phoenix, most people who travel to Scottsdale arrive by flying in to Sky Harbor International Airport. It’s a snap finding a flight that will work well with your scheduling needs at this thoroughly modern airport. Driving in is also easy, since the roads in and around Scottsdale and Phoenix are well designed for navigation.

Thanks to the year-round warmth of Scottsdale, any time truly is a good time to visit. However, summertime can be very hot; it’s not unusual for temperatures to exceed 100 degrees Fahrenheit for long stretches of time. If you’d like to spend a decent amount of time outside when in Scottsdale, then, it is best to visit during the more comfortable winter months.

8 Gems You Didn't Know Were in Tucson