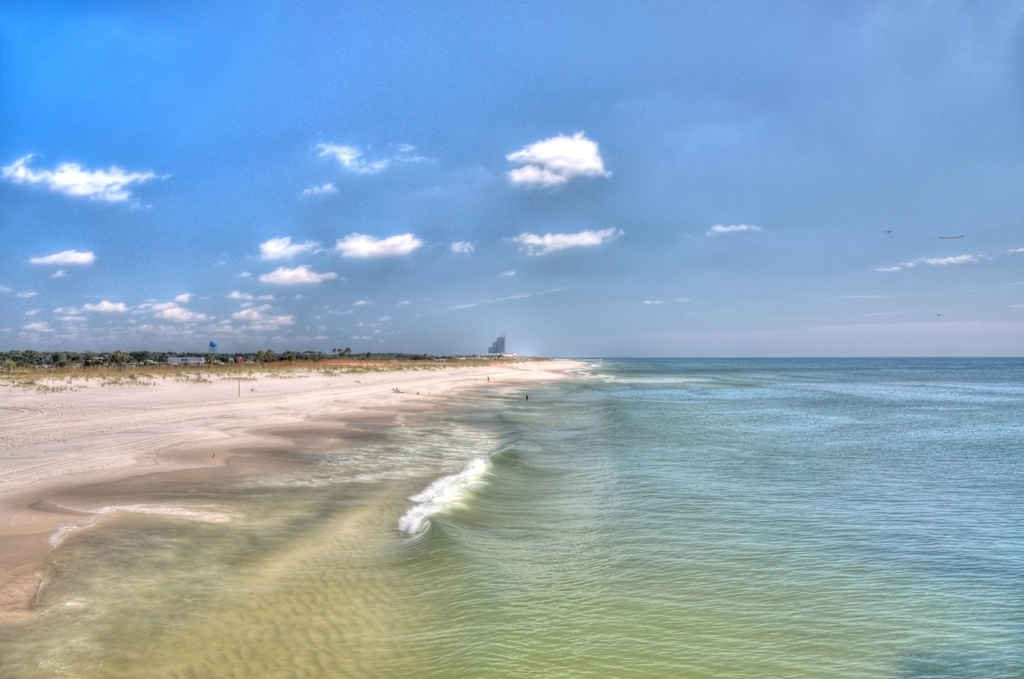 Just before Alabama became a state in 1819, many settlers began spreading across the region. Due to its prime location on the Gulf of Mexico, Gulf Shores attracted its own fair share of those settlers. Throughout much of its history, the town has owed much of its existence to nearby military bases and installations. Fort Gaines and Fort Morgan are just two examples of the places that helped put Gulf Shores on the map. The other thing that turned many people’s attention to Gulf Shores also nearly wiped it off the map: hurricane activity. The entire region has had to deal with several hurricanes through the years, but that hasn’t deterred people from flocking there for its warm, sandy beaches and friendly atmosphere one bit.

Relaxing on the beach – and splashing in the surf – are the two main things that come to mind when most people think of Gulf Shores. The city itself, however, and the surrounding area present many other unique sightseeing opportunities. They include:

Since the military has had such a huge influence on the history and culture of the area, it is fitting to visit the National Aviation Museum at the nearby Pensacola Navy Base to learn a bit more about it. It may not be high on most people’s lists when vacationing in Gulf Shores, but it’s definitely worth a visit.

In all of the hulabaloo at nearby beaches and during Spring Break, many people forget that this stretch of Alabama is home to many amazing kinds of wildlife. The Bon Secour National Wildlife Refuge is a wonderful place to get a more up close and personal look at the many different species of birds and other wildlife that call the Gulf Shores region home. Trails and a stellar beach add to the allure of the park, making it a natural choice.

Estuaries are an important part of the ecosystem of the Gulf Shores area. By stopping by the Dauphin Island Sea Lab, you can check out the Estuarium to find out how this seemingly dull geographical feature impacts the surrounding area. With its many complex inlets and other features, the estuary system of Mobile and the surrounding area is home to a vast array of different animals and birds, all of which you can learn more about at this topnotch attraction.

Fort Morgan is an important part of the history of Gulf Shores, and it’s an excellent place to explore on a fair weather day. Several steps and other areas allow you to enjoy amazing views of the Gulf, and several cannons dot the landscape, reminding visitors of the sometimes tumultuous past of this now-serene and idyllic place.

Gulf Shores gets a lot of attention for playing host to many frolicking teenagers during Spring Break each year, but there are ample numbers of activities and attractions that cater to couples and children as well. The trick, as always, is knowing where to go. To get started, consider including one of the following attractions during your visit:

Many people could make a convincing case for changing the name of Gulf Shores to Golf Shores, thanks to its large number of courses. If you enjoy the sport, you have plenty of options at your disposal. Consider Soldier’s Creek or Glenlakes for less crowds and well kept grounds. Regardless of where you go, you’ll find ideal conditions for golfing all over the area.

If you’re traveling as a family and have older kids in tow, you should consider trying out a bit of parasailing along the beach at Gulf Shores. It may seem a bit daunting if you’ve never done it before, but it’s actually a very simple procedure. The kids and the parents alike will have a wonderful and very memorable time.

Couples who want to while away a few hours exploring well manicured grounds and an historic home should visit the Bellingrath Gardens & Home in nearby Theodore, Alabama. With 65 acres and several tours available, it is a great place to learn more about the proud history of the region.

You’d be hard pressed to find more authentic examples of mouth-watering Southern cuisine anywhere outside of the Gulf Shores area. Whether it’s pulled pork, peach ice cream or pecan pie, you’re going to feel positively spoiled after sampling the fare at many of the local restaurants and diners. Be adventurous and stick with regional cuisine when in Gulf Shores; you won’t regret it.

Most people fly into airports in either Mobile, Alabama or Pensacola, Florida when visiting Gulf Shores. From either one of those airports, it’s only a short drive to get into the actual city. Interstates 10 and 65 are the main thoroughfares into and around Gulf Shores, making navigation quite simple.

If you’d like to beat the crowds – but still want to enjoy the excellent, warm weather that helps make this area so popular – you should plan your vacation to Gulf Shores for either May or September. Summertime is also lovely, but you’re going to have a lot more people to contend with during that season. No matter when you come, you’ll have a relaxed and laid back time.

7 Things You Must Do in Monterey County