Places to Visit in Mexico During Day of the Dead

Each October, as the Day of the Dead / Dia de Los Muertos draws near, Mexican markets overflow with decorated breads, fanciful paper cutouts, and whimsical toy skulls and skeletons. The traditional autumn holiday in Mexico takes place on and around the night of November 1 and the day of November 2, when the souls of the dead loved ones are said to return to earth.

During the holiday Mexicans remember and honor their deceased loved ones with colorful and festive celebrations. People in towns throughout Mexico (and in places around the world) flock to cemeteries to decorate graves and spend time with those lost. Elaborate ofrendras, or altars and offerings to the deceased, are built in homes and public spaces from markets to metro stations. Many ofrendras feature catrinas (the iconic female skeleton dolls which embody the holiday), carefully arranged sugar skulls, bright marigolds (the flower of death), and papel picado (traditional folk art of colorful paper cut into intricate patterns).

Here are a few places to visit in Mexico during the Day of the Dead / Dia de Los Muertos in November, each with their own celebration of Mexican culture and heritage. 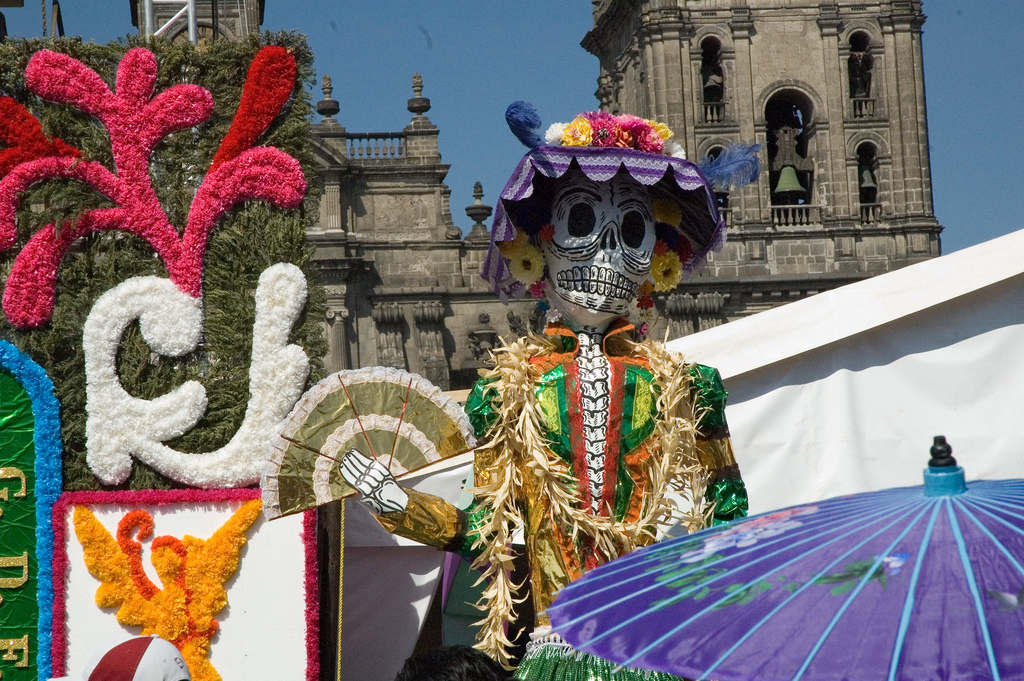 In Mexico City, the Day of the Dead holiday is celebrated more as a folk tradition than a religious affair, compared to more rural areas of the country. Visit Vocalo, the main square, to see the festive and colorful entries in the citywide altar contest. Other elaborate, large-scale paper mache calaca scenes can be seen at the city's major museums such as Casa Azul, Anahuacalli, and Museo Dolores Olmedo Patiño (calaca is colloquial for "skeleton"; the displays feature larger-than-life skeletons wearing intricate clothing, shown dancing or playing musical instruments. The scenes draw on the Mexican belief that no dead soul likes to be thought of sadly, and that death should be a joyous occasion). You can also take part in the major vigils held at the city's largest cemeteries, Panteón Civil de Dolores and Bosque de Chapultepec, where families gather around their dead, offering pan de muerto (bread of the dead) and decorating gravestones with candles, flowers, and trinkets. 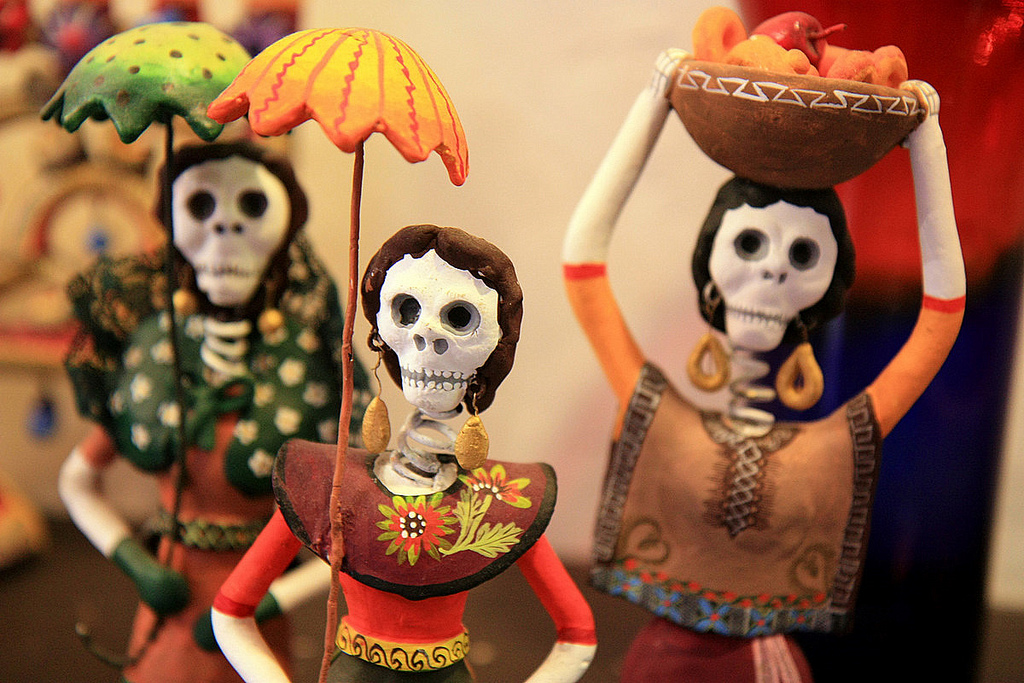 UNESCO declared Xcaret Park, on the Riviera Maya, included in its list of Masterpieces of the Oral and Intangible Heritage of Humankind for its celebration of the Day of the Dead. Take part in the honored tradition celebrated over the course of four days and enjoy regional cuisine, traditional sweets, workshops, crafts, and the holiday's signature altars. Standing Xacaret apart from other regions in Mexico is its Traditions of Life and Death celebration, which celebrates Mayan community, art, and participation in society. Rituals centered on Hanal Pixan, or "food of souls" in the Mayan language, offer traditional dishes to the spirits who are believed to return on the Day of the Dead. 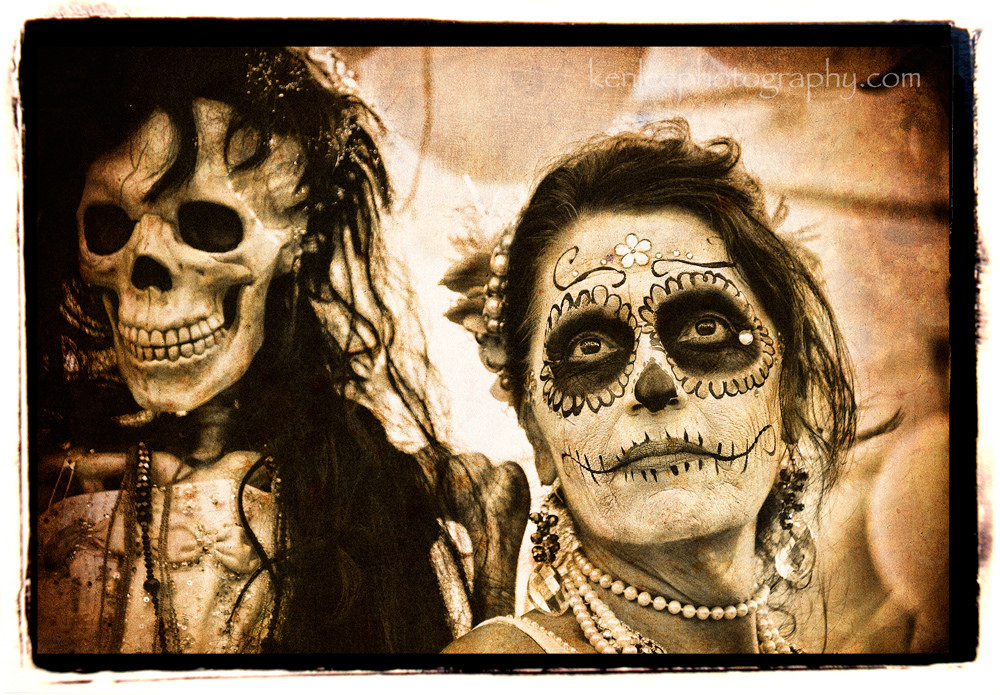 Just a few hours from the Riviera Maya, the people of Mayan descent in Quintana Roo focus on family and tradition to celebrate and honor the dead, with each family member playing a different role. Women, dressed in white hipiles (traditional embroidered blouses), prepare the food. Children bring flowers, decorate the altar and help clean the house. Men bring wood and products from the field to be placed on the altars. Cenotes (freshwater natural sinkholes) were believed by the Mayan to be gateways to Xibalba (the World of the Dead), and many families gather here to hold their ceremonies to their loved ones. Mucipollo, a traditional dish consisting of a large tamale stuffed with chicken and spices, covered with banana leaves, and cooked underground, is prepared and served with balche, a kind of mead made from fermented, honey-and-water-soaked tree bark. Balche has historically been used by the Maya during rituals. 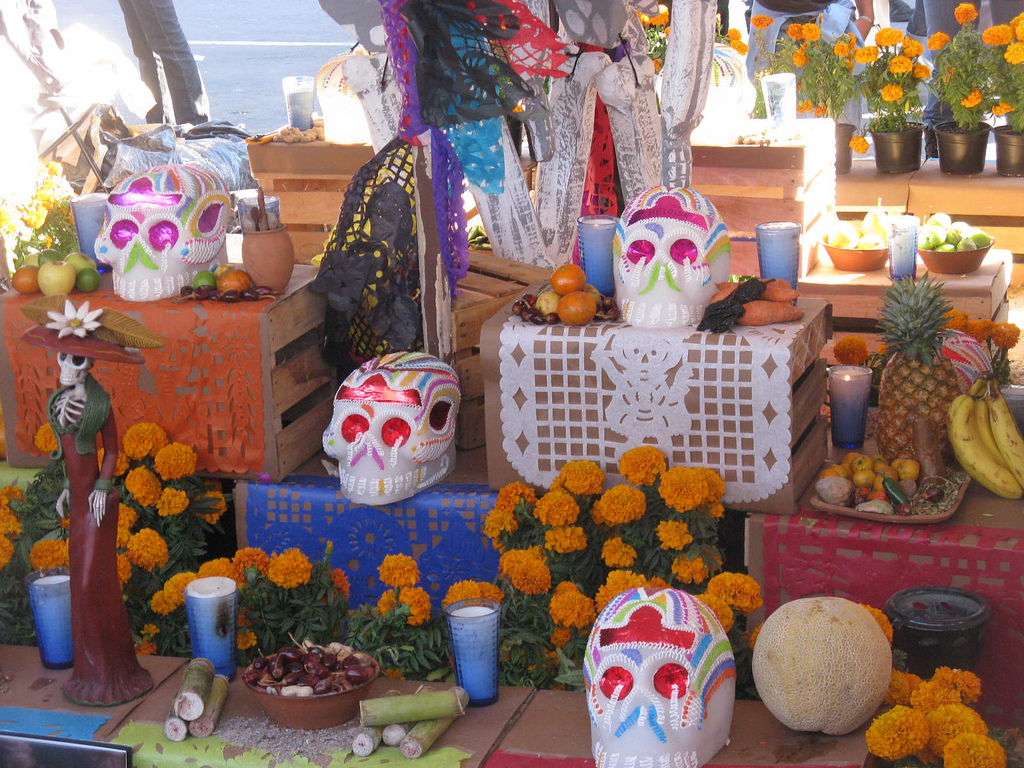 In this city of deep-rooted tradition, the Day of the Dead is celebrated with the Festival of Skulls, a two week celebration with musical performances, theater plays, sporting events, art and design exhibitions, and culinary tastings celebrating local culture. The festival culminates in the cheerful skeletons' street parade, in which costumed dancers and oversized paper mache skeletons march through the streets of the town. You'll see the tradition of altars and food offerings again here to commemorate the dead, and a festive party is also held on nearby San Marcos Island featuring local craftsmanship and traditional foods.