America’s first national park spans 3,468 square miles in Wyoming, Montana and Idaho with some of the most stunning geysers and hot springs in the world. Yellowstone National Park, established in 1872, features Old Faithful, one of the most popular attractions in the US, Yellowstone Lake, one of the largest high-altitude lakes in North America, and the Grand Canyon one of the most impressive natural wonders of the world along with grizzly bears, wolves and free-ranging herds of bison and elk who roam the subalpine forest. 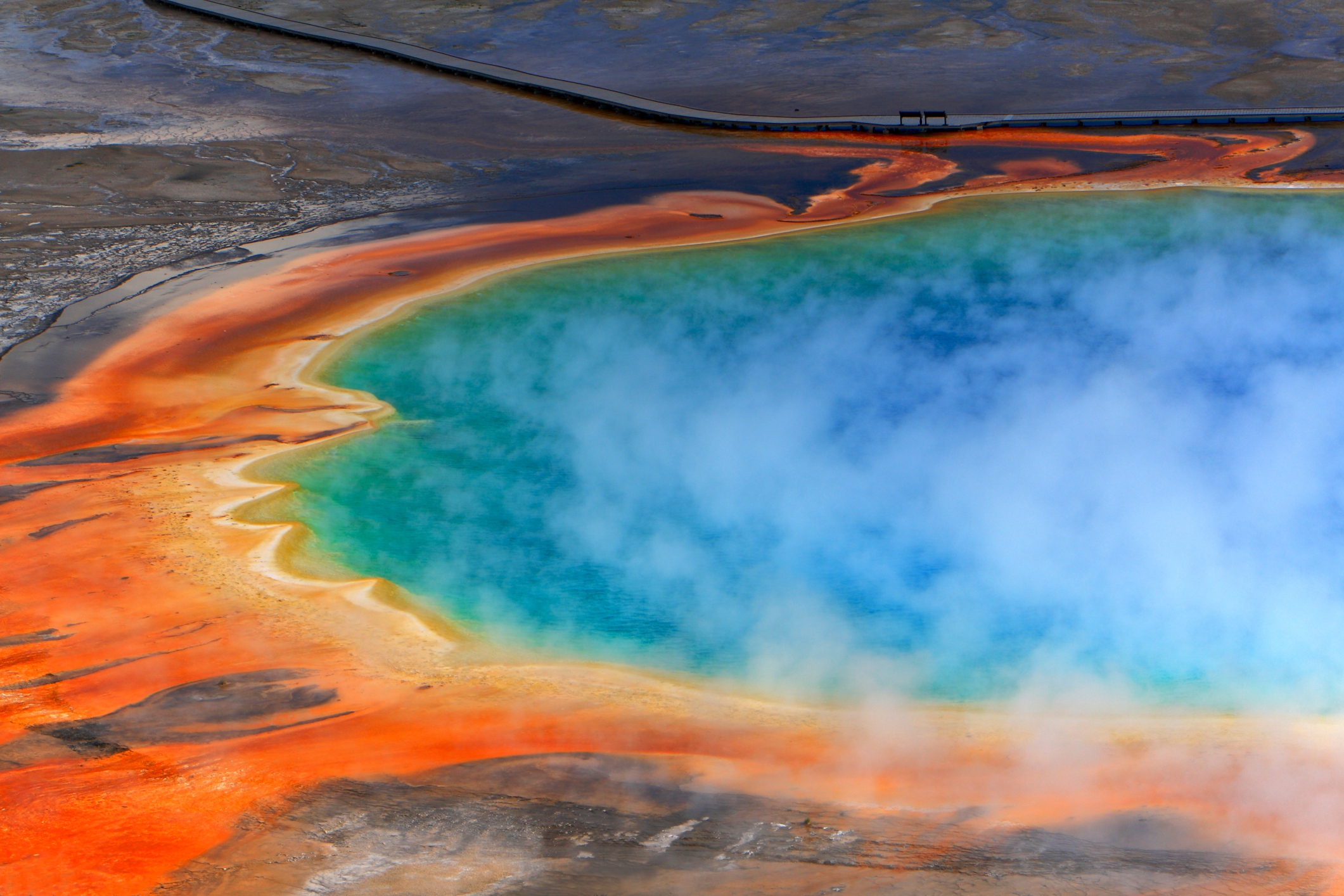 Highlights and Points of Interest

Yellowstone Lake sits atop Yellowstone Caldera, the largest supervolcano on the continent. Lava flows and rocks from eruptions over the past 2 million years cover the park.

In the Mammoth District, find the Mammoth Hot Springs, which changes daily making every visit a surprise. The travertine formations grow quickly with the softest limestone in the region. Hot water dissolves the siding as it rises and leaves a white, chalky mineral on the surface. One day a spring may be there, the next it’s gone, but the overall volume of water discharged remains the same.

At the North Entrance Road in Gardiner, Mont., you can find the Gardner River that winds its way through the park. Crumbling sandstone walls and ancient mudflows decorate the landscape, and eagles, osprey, dippers and kingfishers dive along the river and bighorn sheep cavort in the steeper parts of the canyon.

The halfway point between the equator and the North Pole is known as the 45th parallel. In Yellowstone, it crosses the road north of the Gardner River. Just south of that point is Boiling River, where visitors can park and hike half a mile to reach the warm waters where the large hot spring enters the river.

Mount Everts got its name from explorer Truman Everts, who lost his glasses and horse in the wilderness. He spent 37 days starving and hallucinating as he wandered through the caverns in 1870 while on the Washburn Expedition. When he was finally found on the cut near Blacktail Plateau Drive, his rescuers almost shot him, thinking he was a black bear. His tale is one of the best-known stories from Yellowstone and gave the mountain its name, even though he never made it to Mount Everts. Between 70 million and 140 million years ago, the area was covered by a shallow inland sea that created the layered sandstones and shales.

Climb the 8,564-foot Bunsen Peak on a trail that starts at the Golden Gate or on another that starts on old Bunsen Peak Road. The peak burned in the 1880s and again in 1988. Both the peak and Bunsen burners (which you may remember from science class) were named for German physicist, Robert Wilhelm Bunsen, involved in pioneering research about geysers, which he believed the laboratory devices resembled. 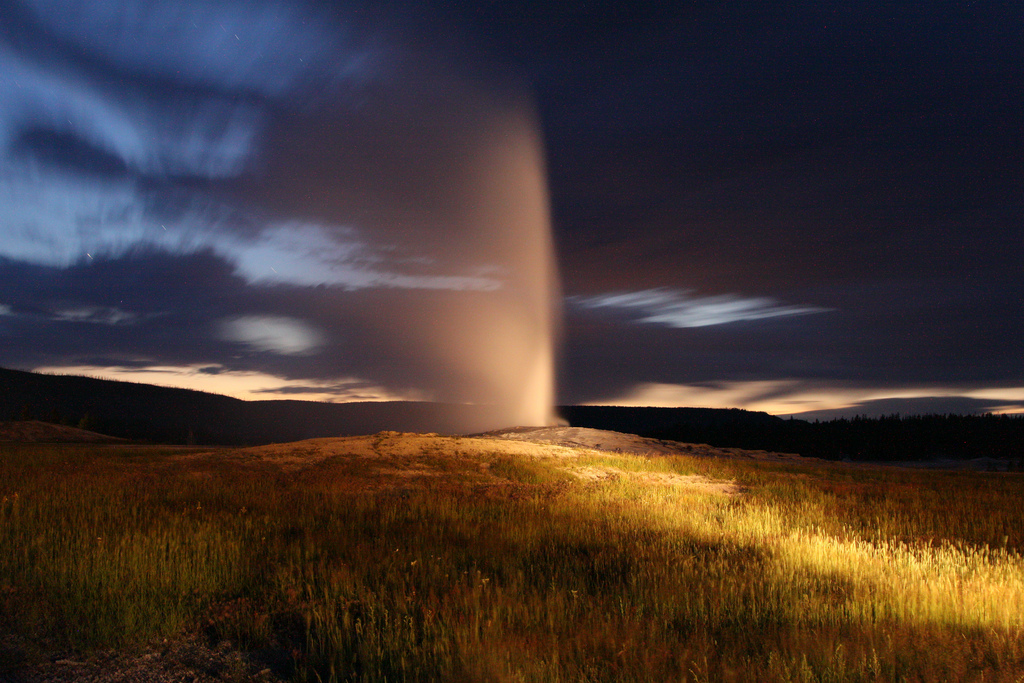 Of course, the biggest attraction in Yellowstone is the system of geysers. Close to 60 percent of the world’s geysers are in the park and within one square mile at least 150 of these hydrothermal wonders spout. Of all the geysers, only five go off on regular intervals - Castle, Grand, Daisy, Riverside and Old Faithful.

Old Faithful, the first named geyser in the park, can shoot 3,700 to 8,400 gallons of water between 106 to 185 feet for 90 seconds to five minutes. Intervals between eruptions can range from 45 to 125 minutes. Seven miles south of Old Faithful on Grand Loop Road sits Craig Pass/Isa Lake, at 8,262 feet along the Continental Divide. During the spring, the lake runs off into the Atlantic and Pacific oceans and even runs backwards.

Lower Geyser Basin can be seen by walking along the boardwalk trail at Fountain Paint Pots or by car along the three-mile Firehole Lake Drive, a one-way drive where you can find a sixth geyser, Great Fountain. This splashy geyser erupts droplets 100 to 200 feet in the air as waves of water cascade down the raised terraces.

Great Fountain erupts twice a day within a two-hour window. You can also find Fountain Flats Drive that follows the Firehole River to a trailhead. From there, the Fountain Freight Road hiking/biking trail continues along the old roadbed to offer hikers access to the Sentinel Meadows Trail and the Fairy Falls Trail.

Although small, Midway Geyser Basin contains Excelsior Geyser, a gaping crater 200 by 300 feet that constantly discharges more than 4,000 gallons of water per minute into the Firehole River. Here you can also find Yellowstone’s largest hot springs, Grand Prismatic Spring, at 370 feet in diameter and more than 121 feet in depth. Access to Lone Star Geyser Basin can be achieved by hiking a 5-mile roundtrip trail south of Old Faithful. This backcountry geyser erupts every three hours. Get to Shoshone Geyser Basin on a 17-mile roundtrip hike that crosses the Continental Divide at Grant’s Pass.

Numerous waterfalls can be found near Old Faithful as well. Kepler Cascades is the most easily reachable just south of Old Faithful. A short walk gets you to the 125-foot cascade. 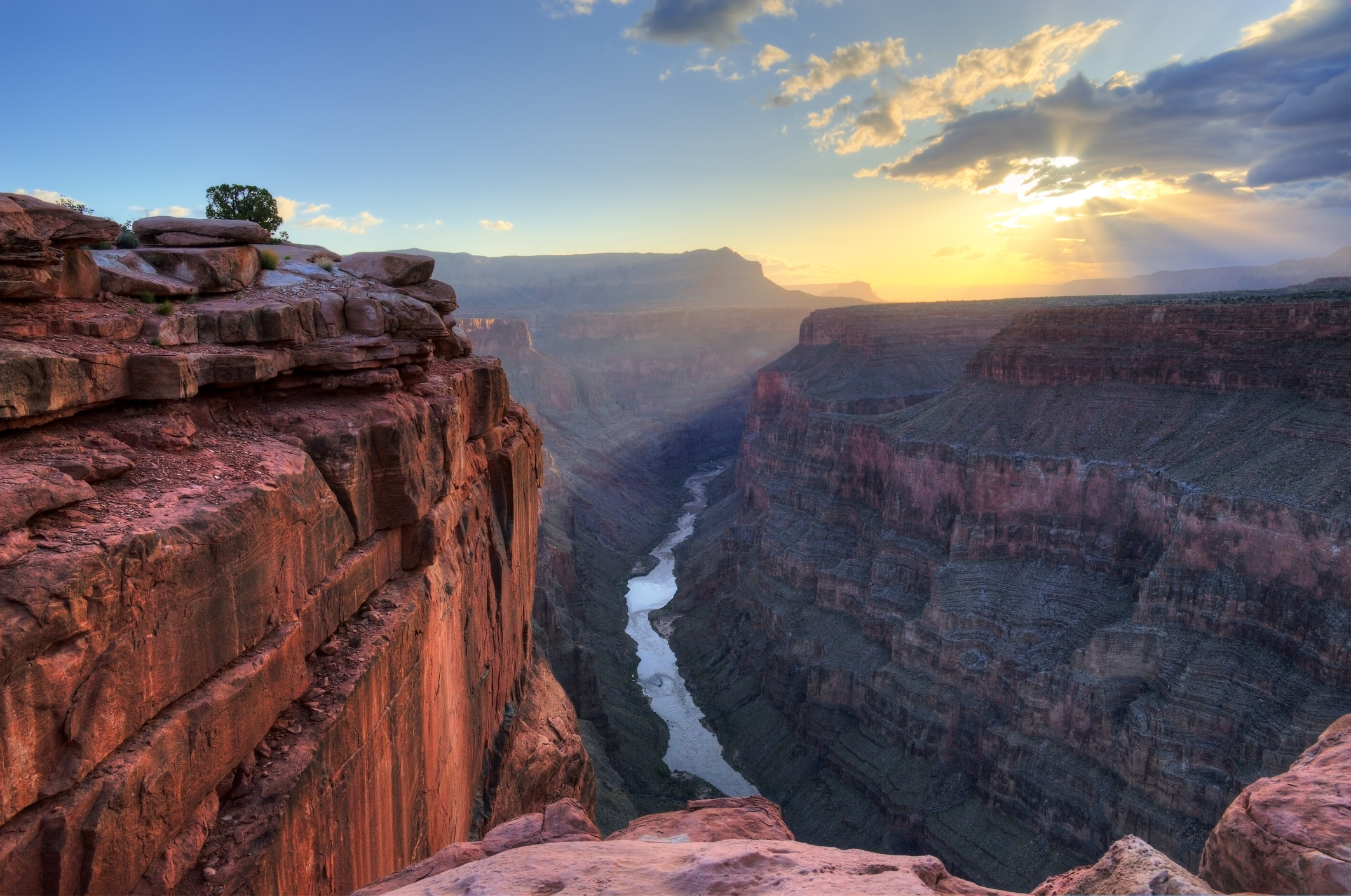 The 20-mile Grand Canyon of the Yellowstone is no more than 10,000 to 14,000 years old. Below, Yellowstone River flows with the 109-foot Upper Falls upstream and the Lower Falls at 308 feet. While higher than Niagara Falls, the volume of water flowing over the Lower Falls only reaches 63,500 gallons per second. See the Upper Falls from the Brink of the Upper Falls Trail and from Uncle Tom’s Trail. The Lower Falls can be seen from Lookout Point, Red Rock Point, Artist Point, Brink of the Lower Falls Trail and various points on the South Rim Trail. In between these two waterfalls sits Crystal Falls, an outfall of Cascade Creek into the canyon. It can be seen from the South Rim Trail just east of the Uncle Tom’s area.

The 132-square-mile Yellowstone Lake is the largest lake at high elevation in North America. This natural lake, situated at 7,733 feet above sea level, is roughly 20 miles long and 14 miles wide with 141 miles of shoreline. It lies frozen from late December or early January until late May or early June.