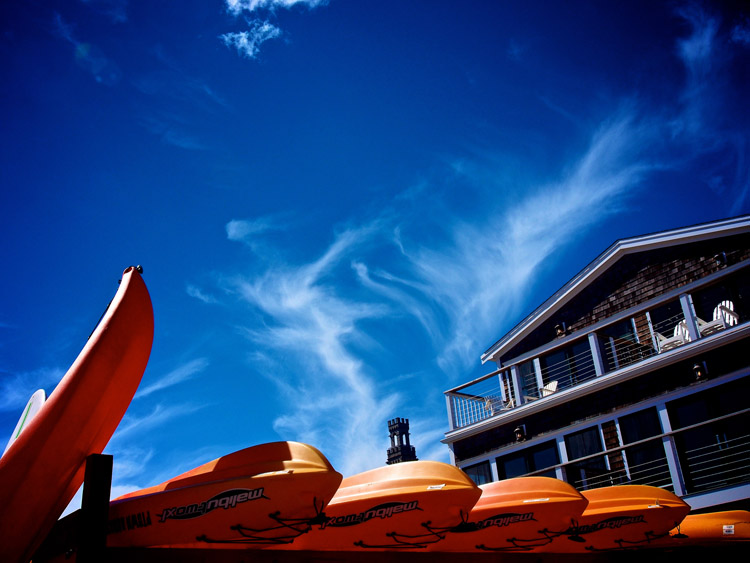 History and culture can be enjoyed in equal measure in Provincetown, Massachusetts. This quirky town – which is situated at the furthest tip of the Cape Cod peninsula – was the original landing site of the Pilgrims and has long been a haunt for artists of all kinds. Today, eclectic art galleries line the streets of Provincetown, and a laissez-faire sensibility predominates among its residents. For visitors, Provincetown offers an alluring mix of New England charm, bohemian flair and outdoor fun, making it a natural getaway choice. Whether you choose to spend your time here gazing to sea in search of wildlife, or roaming the teeming streets of a city where gay pride is an important part of the culture, you’re bound to get swept away in the one-of-a-kind personality of this unforgettable place.

Ask anyone who is familiar with Cape Cod, and they could easily tick off some of Provincetown’s most well-known attractions; the Pilgrim Monument and Race Point Beach are two obvious ones. However, there are many out-of-the-way things to enjoy while in Provincetown; a few of them include:

This well-preserved lifesaving station is home to a unique and intriguing museum; several unusual artifacts are on display here. The theme here is rescues by sea, and whether you’re well versed on the topic or not, you’re sure to learn a little something while visiting.

This nature reserve is a popular place for locals to bike and hike. Topnotch trails crisscross the scenic grounds of this delightful area, making it a natural place to go if you want to explore the topography of the region. On nice days, pack a lunch and have a picnic; it’s a wonderful way to spend a day outdoors while on the Cape.

While the Provincetown Museum gets a lot of the attention in this small town, the Town Hall boasts several interesting exhibits of its own. A visit here is a great way to get a feel for how this eclectic place runs, and there is usually a lot of great people watching to enjoy here as well. Make a point to stop in and see for yourself; you’ll be glad that you did!

When most people think of the Pilgrims’ arrival in the New World, Plymouth Rock comes to mind. However, Provincetown is home to the real place where the Pilgrims first landed on their journey here: the Mayflower Steps. Although history books don’t place as much importance on this site, it is still a really unique way to learn a little bit more about this fascinating part of American history.

Much of Provincetown’s reputation revolves around its gay-friendly philosophy; indeed, there are plenty of gay clubs and bars in the town. However, such attractions are just the tip of the iceberg, and Provincetown has plenty for couples and kids to enjoy including:

Camping is a wonderful family adventure, and camping on the Cape is unlike anything else. You can take your pick from two different camping areas near Provincetown: Dunes Edge and Coastal Acres. Either way, the whole family will enjoy an unforgettable camping experience amid the dunes and other scenery of this gorgeous part of the East Coast.

There’s something to be said for small town theater productions, especially when they are surprisingly well done. The Provincetown Repertory Theater enjoys an impeccable reputation and is a wonderful place for a couple to enjoy during a night out on the town. No matter what production is being conducted, it’s bound to be a memorable experience and is a nice change of pace from the usual small town attractions.

The dunes of Provincetown are among its most unique topographical features, and there is plenty of room for everyone to find their own quiet and secluded spot. If you’re traveling as a couple, consider staking out a dune off of Race Point beach and watch the sun set together; nothing could be more romantic.

As is to be expected, Provincetown boasts a plethora of exceptional seafood joints; be prepared to mow down on lobster, clam chowder and every other popular kind of East Coast seafood while here. One of the best things about dining in Provincetown is that the food is always supremely fresh; it seems as if it has just been plucked out of the sea, and it probably was just that very morning.

Since it sits on the very tip of Cape Cod, the vast majority of people make the drive out from the mainland. In that case, flying into Boston’s Logan Airport is the most convenient option for visits to Provincetown. Traveling by car along the Cape can take a long time, though, especially during the congested summer months.

The weather in Provincetown – and, indeed, along the entire Cape – is at its best between May and November. If you have a choice in the matter, try to hit the town between those months. That’s when temperatures are at their warmest and when you can get the most out of the beach. Winters are cold and snowy and don’t lend themselves well to outdoor activities.