A Bridges of Madison County Road Trip through the Countryside 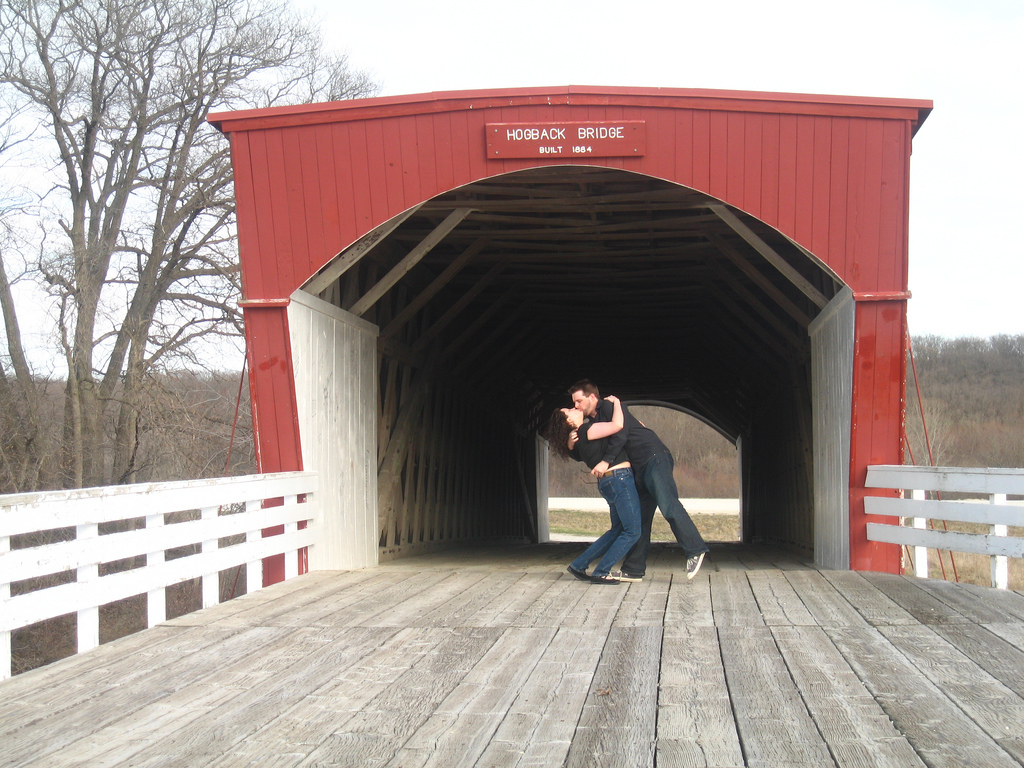 If you’ve ever dreamed of a romanticized life like Francesca, falling madly in love with your surroundings as much as the idea of a great affair or escape, you can relive her epic tale by creating your own photo essay of the beautiful covered bridges of Madison County, Iowa (also famed for being the birthplace of John Wayne, home of the red delicious apple, and named after beloved 4th president James Madison). 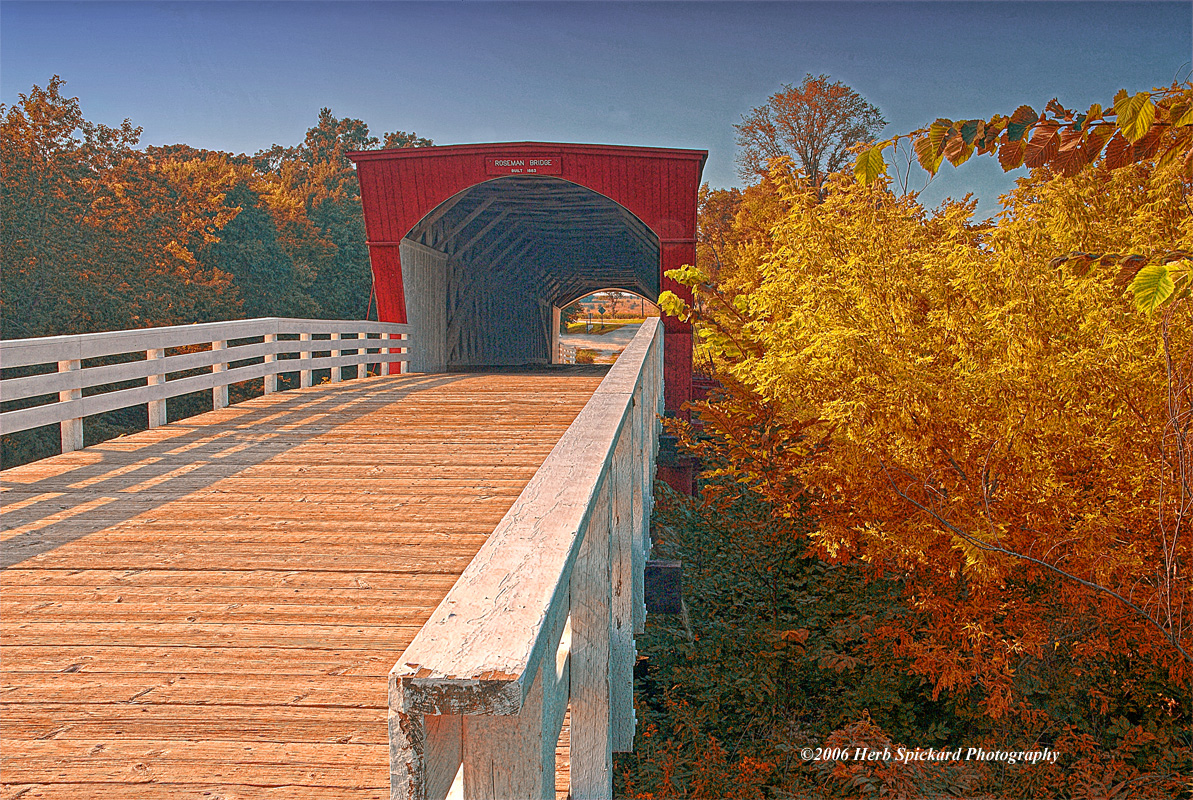 Originally built as a way to protect farm products being transported via covered wagons, once larger and heavier automotive were invented, the bridges became more of a hindrance than helpful and farmers demanded they be taken down or moved. Once home to 19 famed covered bridges, only six remain, five of which are listed on the National Register of Historic Places. 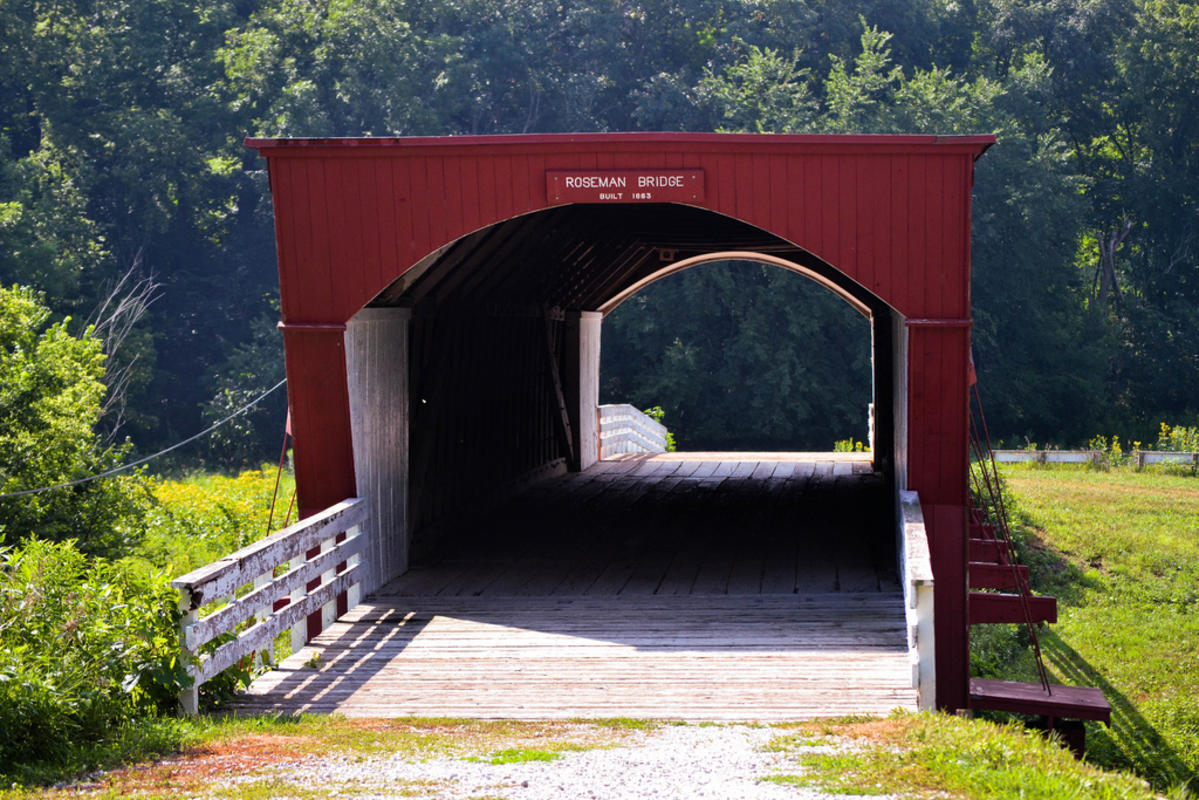 Here’s how to see the most famous of them:

Roseman Bridge – The bridge Robert Kincaid seeks when he stops at Francesca Johnson’s home for directions, it’s also where she leaves him a note inviting him to dinner. Claimed to be haunted, in 1892, two county sheriffs trapped a jail escapee inside the bridge and it is rumored that he rose straight up through the roof and disappeared, never to be seen again. Despite this, it’s one of the most romantic symbols of the book and a spot people go to leave love notes and messages.

Holliwell Bridge - The longest of the covered bridges at 122 feet, Holliwell is one of the few remaining bridges in its original location over the Middle River southeast of Winterset. The Cedar Bridge played a central role in the novel ‘The Bridges Of Madison County,’ however, in the film, it was the Holliwell Bridge that stole the show.

Cedar Bridge – The only bridge open to vehicles, in the novel, Cedar Bridge is pictured on the cover and where Francesca Jones goes to meet Robert Kincaid to help him take photographs. While the current Cedar Bridge is a replica due to destruction by an arsonist, it was rebuilt from the original plans and period photographs to look as similar as possible.

Imes Bridge - The oldest of the remaining covered bridges, the Imes Bridge was built in 1870. It’s slanted front creates the illusion that it’s leaning over, but it’s actually just a trick of the eye and quite an interesting touch to try to capture on film.